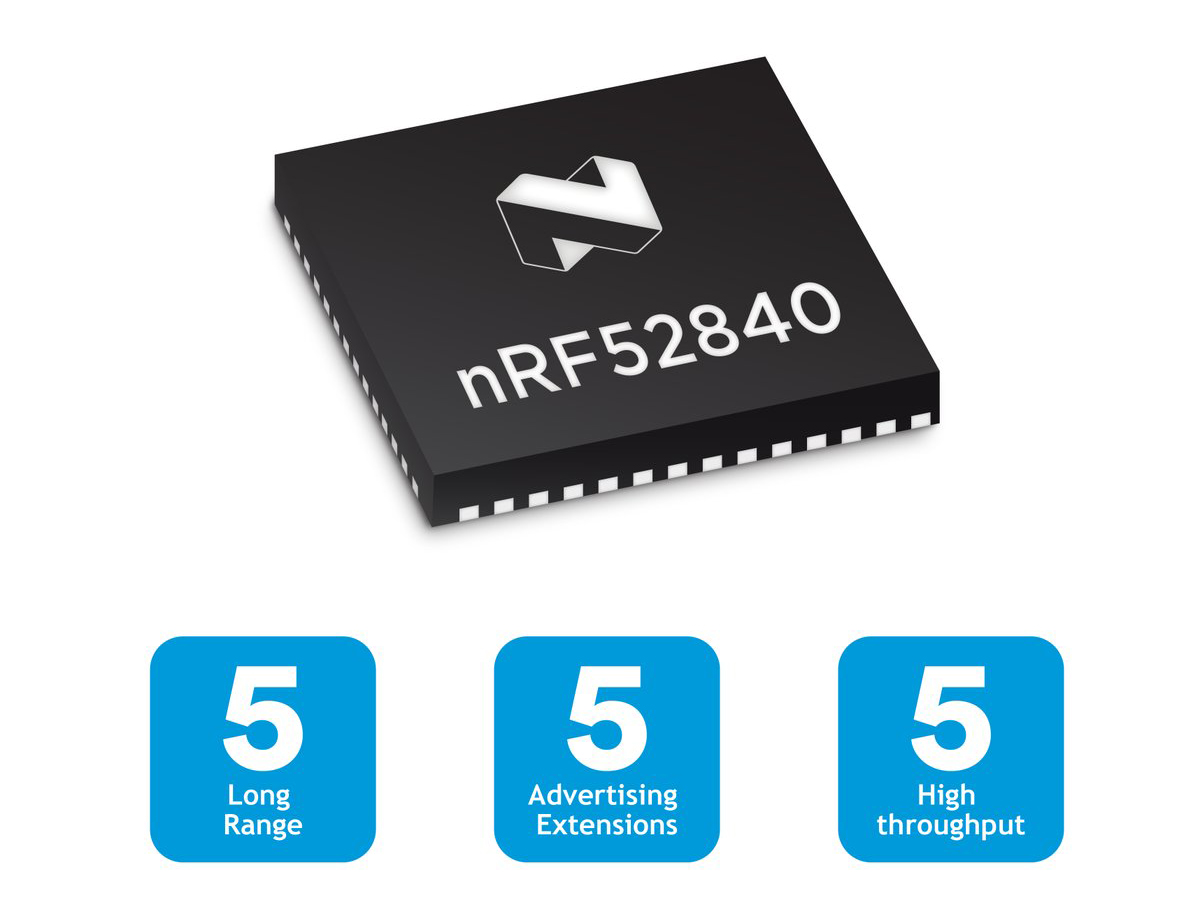 Bluetooth 5’s high throughput mode offers not only new use cases for wearables and other applications, but will also significantly improve the user-experience with Bluetooth products. Time on air will be reduced, typically leading to faster more robust communication as well as reduced overall power consumption. Also with 2Mbps, the prospect of audio over Bluetooth low energy begins to beckon, and whilst at this time not a part of the specification it is a very exciting prospect to be able to introduce real time audio using Bluetooth low energy into products. 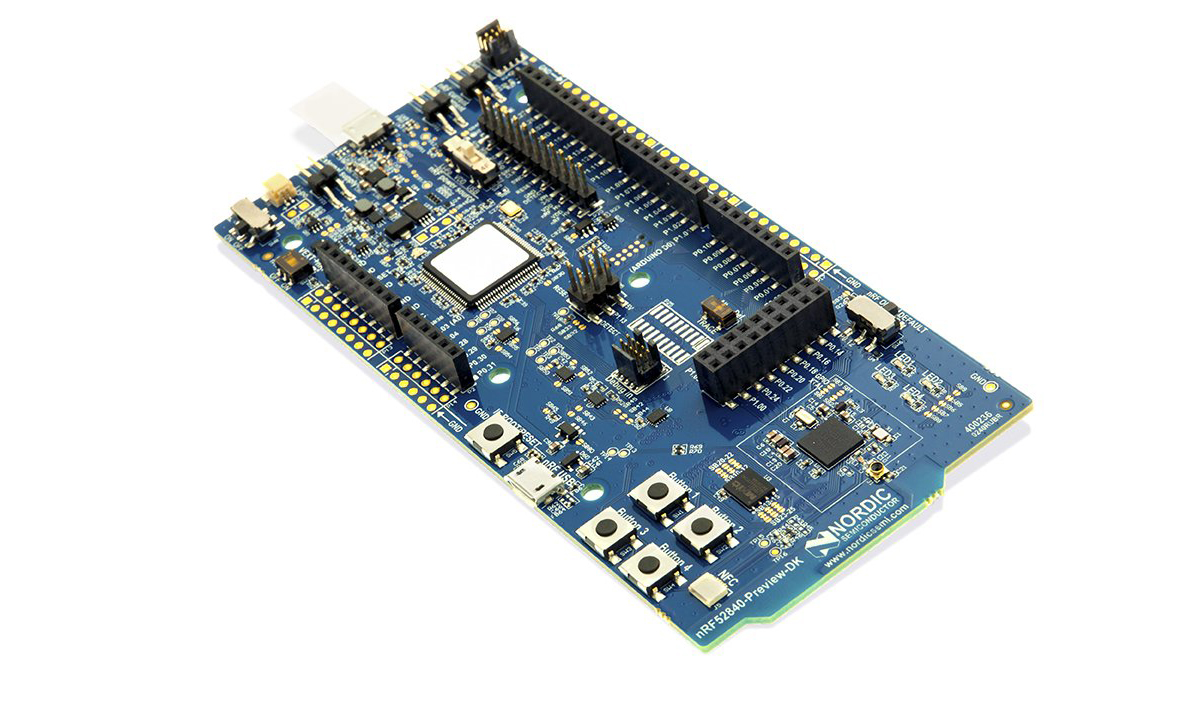 The new Preview Development Kit (nRF52840-PDK) is a versatile, single-board development tool for Bluetooth 5, Bluetooth low energy, ANT, 802.15.4m, and 2.4GHz proprietary applications using the nRF52840 SoC (System on Chip). The kit is hardware compatible with the Arduino Uno Revision 3 standard, making it possible to use 3rd-party compatible shields. An NFC antenna can be connected to enable NFC tag functionality. The kit gives access to all I/O and interfaces via connectors and has 4 LEDs and 4 buttons which are user-programmable. It supports the standard Nordic Software Development Tool-chain using Keil, IAR and GCC. Program/Debug options on the kit is Segger J-Link OB.

The Nordic Semiconductor ‘nRF5 Software Development Kit (SDK) for Thread’ is a complete smart home/home IoT-targeted solution based on OpenThread – the only open-source implementation of the Thread networking protocol, released by Nest Labs – to which Nordic Semiconductor is actively contributing R&D expertise.

The Nordic Semiconductor nRF52840’s class-leading amounts of RAM (256kB) and Flash (1MB) memory also enable the SoC to run both the Thread and Bluetooth low energy protocol stacks from the same single chip. Not only this, the nRF52840 is able to run the Thread protocol at accelerated processing speeds by using its built-in ARM CryptoCell-310 cryptographic accelerator – which offers best-in-class security for Cortex-M based Bluetooth low energy SoCs – to run the Thread security algorithms.

“We see Thread as one of the leading wireless technologies currently emerging in the home IoT space,” comments Geir Langeland, Nordic Semiconductor's Director of Sales & Marketing. “This is why we have decided to strategically invest our world-leading R&D ultra-low power wireless expertise into contributing towards the ongoing development and evolution of the OpenThread software stack.”

The nRF52832 SoC has been engineered to minimize power consumption with features such as the 2.4GHz radio’s 5.5mA peak RX/TX currents and a fully-automatic power management system that reduces power consumption by up to 80 percent compared with Nordic’s nRF51 Series SoCs. The result is a Bluetooth low energy solution which offers 58 CoreMark/mA, up to twice as power efficient as competing devices.

The nRF52840 SoC employs power and resource management to maximize application energy efficiency and battery life. The supply range between 1.7V and 5.5V supports primary and secondary cell battery technologies and direct USB supply without the need for external regulators. All peripherals have independent and automated clock and power management to ensure they are powered down when not required for task operation to keep power consumption to a minimum without the application having to implement and test complex power management schemes.

The nRF52840 has a comprehensive system of automated and adaptive power management features. These features are built into all aspects of device operation from power supply switching, to peripheral bus/EasyDMA memory management, and automated shut down of all but the absolute essential peripherals required to perform a task. Other features include ARM Cryptocell-310 on-chip cryptographic co-processor, on-chip NFC tag with NFC Type 2 and Type 4 tag emulation protocol stacks, and on-chip USB 2.0 (Full speed) support and on-chip VBUS regulation allowing for direct connection to USB hosts for data transfer and direct USB power for hosted applications.

With a maximum output power of +4dBm and an operating temperature range of -40 to 85⁰ C, the EYSHSNZWZ offers 14 general-purpose input/outputs (GPIOs), SPI, UART, I2C, I2S, PDM and 12bit ADC interfaces, and is also pre-certified to FCC, ISED, and MIC standards.

“Taiyo Yuden now has 11 modules employing either Nordic’s nRF51 or nRF52 SoCs, and the common software architecture has allowed us to easily switch between the two,” says Mikio Aoki, Taiyo Yuden Project Manager. “In this instance, we selected the nRF52832 WL-CSP for its powerful and universal ARM Cortex M4F processor and the large Flash and RAM capacity, as well as the NFC-A tag for Touch-to-Pair applications.

The EYSHSNZWZ Bluetooth low energy module will be available in commercial quantities from May 2017.
www.nordicsemi.com
related items