The latest result of Michael Goodman's tireless devotion to high quality audio, the new CEntrance BlueDAC combines wired and wireless connectivity, plus a balanced output in a portable ultra low-noise DAC and Class-A headphone amplifier, with over 40 kHz audio bandwidth, super-low THD, and asynchronous USB. Providing all the options for any audio source, the BlueDAC combines a 3.5mm headphone jack and 2.5mm balanced output, the ability to decode up to 384kHz and DSD audio quality on the USB input, while offering a convenient Bluetooth connection for listening on the go, including aptX support.

As smartphone and tablet owners, we all want to listen to music anywhere and anytime, but without having to carry around additional equipment, such as separate amps and battery packs. BlueDAC is a travel-friendly device that features a long lasting, 20-hour battery (when using wireless input), and offers the highest quality audio circuits on analog and digital stages, using high-quality components to improve sound quality. After showing first prototypes at recent shows, Michael Goodman, the company's founder and CEO, received clear support for the project and launched the BlueDAC on Indiegogo.

The CEntrance design team is known for its work with semiconductor leaders such as Texas Instruments, XMOS and AKM. The company is listed on their websites as an official third party design firm and has helped over 100 manufacturers such as Benchmark, Lavry, McIntosh, Korg, and many more, deliver great audio products to market. When developing BlueDAC, CEntrance has taken advantage of those special relationships and utilized modern approaches to portable power and audio sound quality to achieve further miniaturization and sonic improvements.

Leveraging the experience with the original DACport, recently followed by the    DACportable HD and the DACportable with an internal rechargeable battery (reviewed in audioXpress April 2017 edition), CEntrance was able to perfect the BlueDAC with the best approach to DSD playback, picosecond clocks and sampling rates up to 384kHz, all in a compact and lightweight design with additional Bluetooth support.

On the wireless side, BlueDAC is designed to support a wide variety of digital sources, from laptops to desktops, to tablets, to phones, and even TVs. When using the wired connection, as a USB DAC, BlueDAC offers 32-bit high-resolution audio conversion, up to DSD128. It features the AKM VelvetSound AK4490 digital to analog converter coupled with AmpExtreme — the company's own powerful, Class-AB Headphone Amplifier with digital volume control in 256 precision steps to keep channels in perfect balance, as perfected on the DACportable. The unit is plug-and-play on Mac OS and CEntrance offers drivers for Windows. Linux, iOS and newer Android devices are also supported.

Using an internal battery, the BlueDAC powerful headphone amp is able to drive even the most demanding headphones, from ultra-sensitive IEMs to high-end models, including models with a balanced connection. It features two output level settings - LOW for Line output and HIGH for Headphones. The Li-Polymer battery can be recharged from any external +5V (2.1A) adapter, such as an iPad charger. 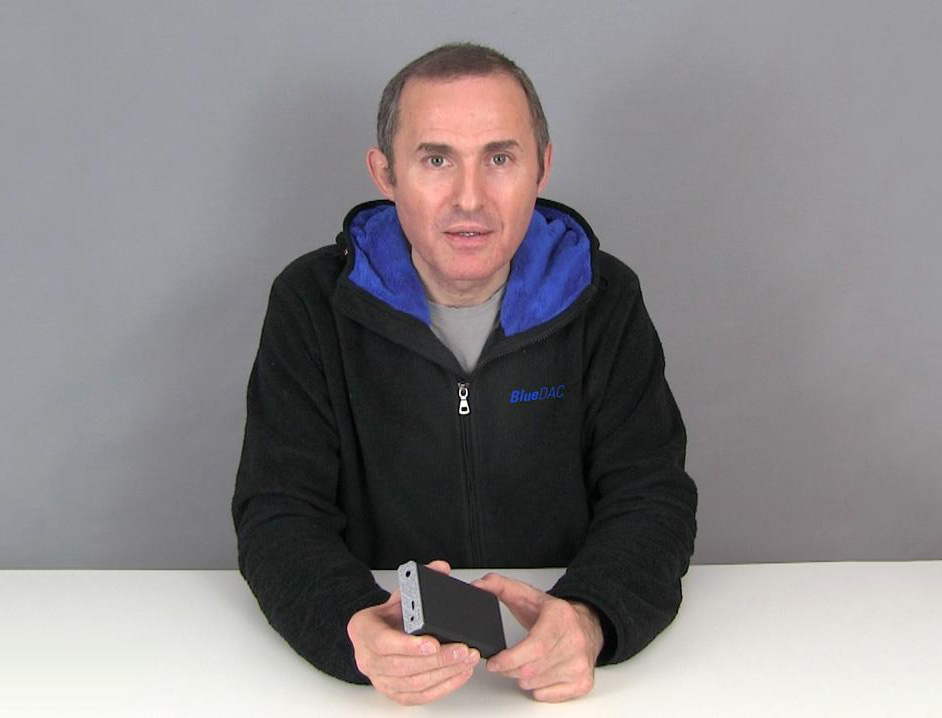 With the crowdfunding campaign already well-funded, CEntrance plans to ship in July 2017. This is the company's fourth Indiegogo campaign and their latest campaign for the DACport HD only took 3 months from start to finish. But the product was based on existing technology, prototyping had been complete before campaign start, and no third parties were involved. The BlueDAC adds some challenges on the wireless section, and additional certifications, while featuring a specially designed chassis with a new formulated scratch protection finish. Still, we don't doubt that this will be another success story for the Chicago-based company.