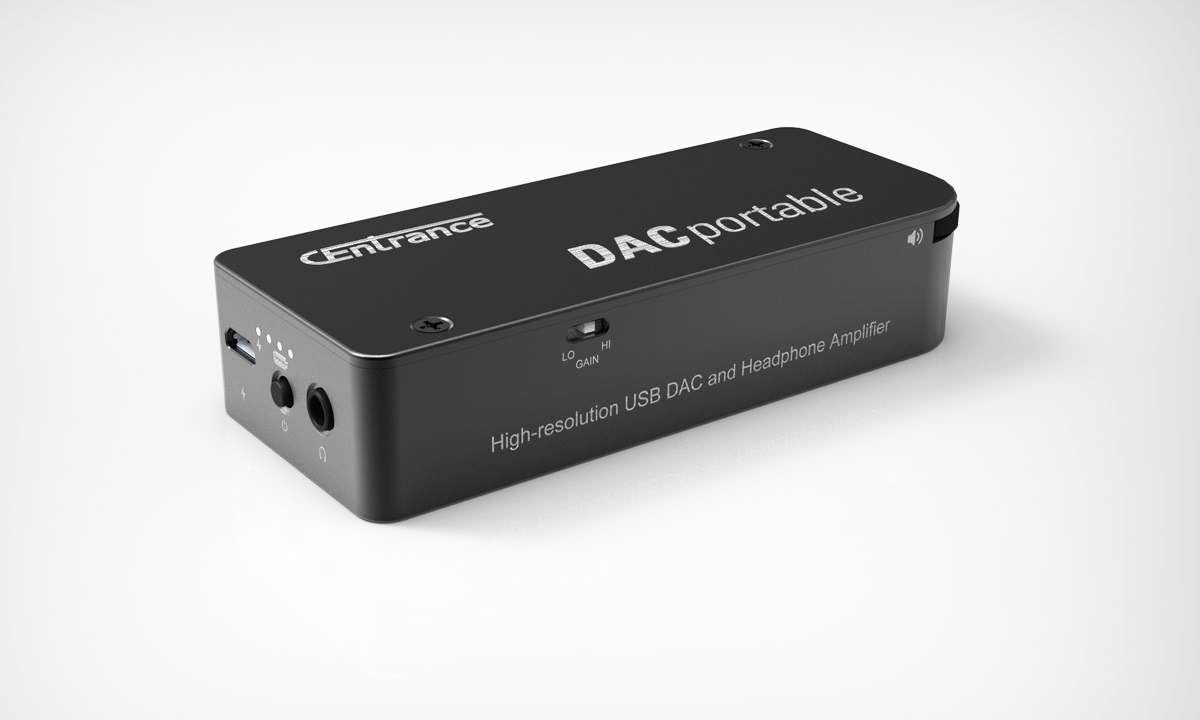 Encased in anodized aluminum, the DACportable combines high-quality components and a USB connection to extract the best digital audio from any portable device - with or without headphone jacks - converting it to analog using high-end D/A conversion technology, and deliver the best audio fidelity. With features like EQ filters, digital volume control, a Li-Polymer quick charge battery and more, DACportable’s 32-bit/384kHz high-resolution digital audio is an attractive proposition for a self-powered device that won’t drain the phone’s battery (8 hours playing time from the internal battery).

DACportable builds upon the legacy of CEntrance’s award-winning DACport Classic and adds the most requested features like a rechargeable battery and sonic shaping filters, combining the company’s 15 years of experience in digital audio product design. As CEntrance describes it, this is their most advanced Personal D/A Converter and Amplifier and the company promises to start shipping already in July 2016, learning previous lessons with previous crowdfunding campaigns.

In fact, the DACPortable Indiegogo campaign met the established $50k goals in less than a week, which means CEntrance is now promoting stretch goals such as a bundled lightning cable and a carry pouch. 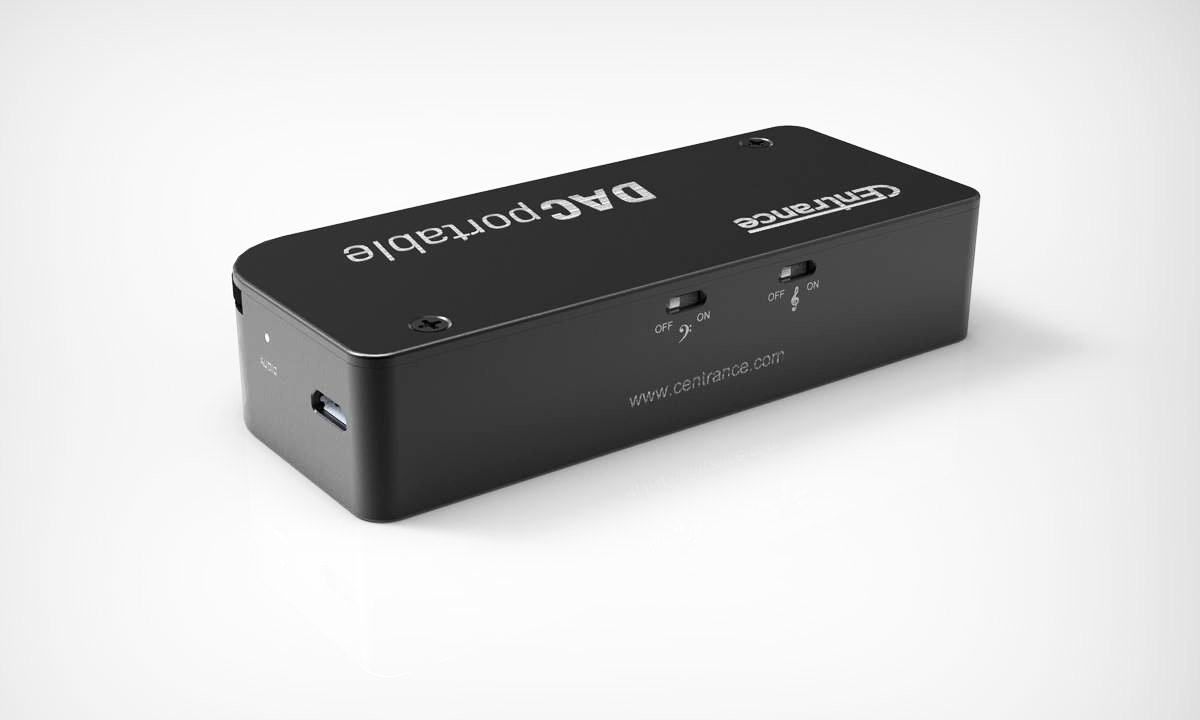 Differently from many start-up projects on crowdfunding websites, CEntrance has designed and built equipment for recording studios, performance stages and broadcast facilities worldwide, as well as consumer audio devices, and they are not promising anything that they’re not able to deliver. In 2009 CEntrance introduced its DACport, a small, USB-powered soundcard with amazing sound quality which conquered the preferences of many high-end enthusiasts. In 2015, CEntrance introduced DSD playback, picosecond clocks and sampling rates up to 384kHz to the ultra-slim DACport HD, which immediately sold thousands of units within months of introduction.

Basically, the DACPortable builds upon this legacy and adds the rechargeable battery and the EQ capabilities from the HiFi-M8 portable DAC, another highly successful product from the company. Inside, it features AKM’s AK4490 Digital to Analog Converter (DAC) coupled with AmpExtreme, CEntrance’s own powerful Class-A Headphone Amplifier with digital volume control. The DAC supports full 32-bit, 384kHz resolution and DSD and it is able to power any type of headphones. There’s also seven regulated internal power supplies to provide full isolation from digital and two Picosecond clocks with JitterGuard jitter removal technology.

The DACportable’s AmpExtreme powerful headphone amp is able to feed 16 to 600 Ohm headphones - from ultra-sensitive IEMs to high-end headphone models from AKG, Audeze, Beyerdynamic, Fostex, HiFi-Man, Master and Dynamic, Mr. Speakers, Sennheiser, and many others. The analog output signal rates a frequency response to 40kHz (-0.2dB) with a 110 dB SNR and 0.002% THD+N.
It will support 32, 24 and 16-bit files, with sampling rates from 32 to 384kHz, and DSD64 and DSD128 material.

The design also features several useful controls, starting with an ergonomic, side-mounted slider to allow single-handed volume adjustment, EQ controls (off, Bass Kicker for added bass impact, and Top Extender for additional high-frequency detail), and an analog 20 dB Gain Switch, allowing for output level for line output and headphones. On the power side, there’s a 5V / 2.1 A charger input on a standard USB Micro A connector, a Power button and a gold-plated 3.5mm headphone jack. Above the power button, the four LEDs indicate battery status. On the other extreme there’s a separate USB Micro A asynchronous interface exclusively for audio input. This allows for the device to charge the internal battery while still playing music. The unit will auto shut-off when inactive.

The DACportable is also designed to support a wide variety of digital sources, from computers, to tablets, and iOS or Android newer smartphones. The unit is plug-and-play on Mac OS. As a famed driver developer firm, CEntrance has drivers for Windows XP through 10. Linux is also supported out of the box. The asynchronous USB interface is handled by an XMOS U8 chip. CEntrance is also a 3-rd party development house for XMOS and other chip companies, providing engineering support to many well-known manufacturers. 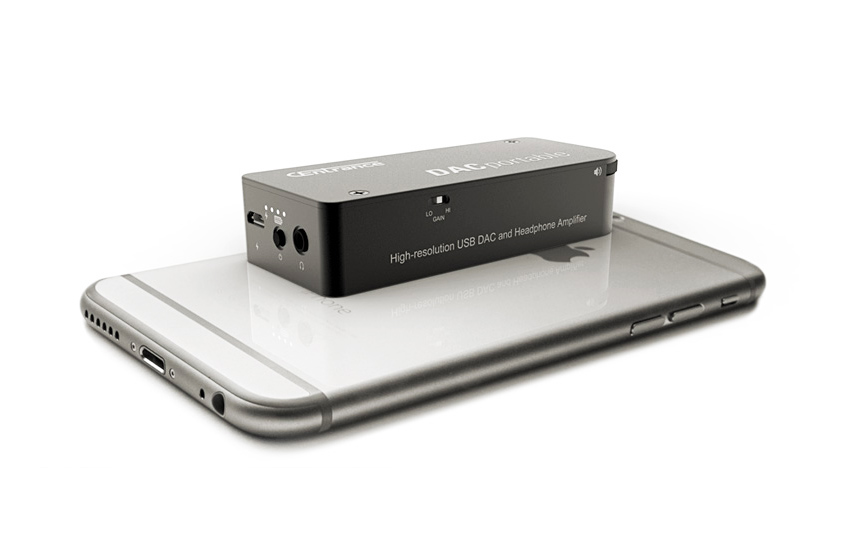