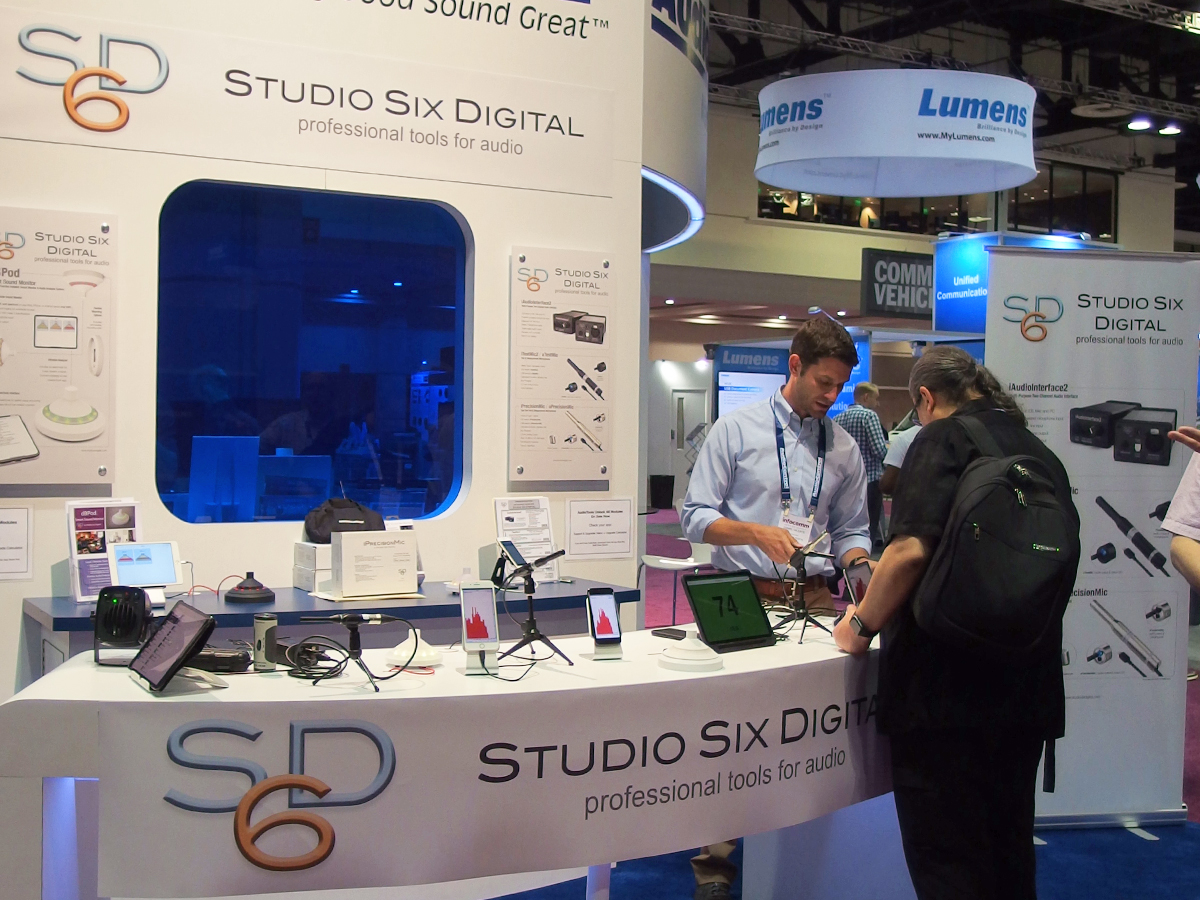 Studio Six Digital was founded over ten years ago and is based in Santa Cruz, CA. The company’s success has been based on the software and hardware designs of founder Andrew Smith, and Studio Six Digital has garnered a large following of loyal customers around the world. Studio Six provides innovative microphones, audio interfaces, apps and software to audio testing and measurement professionals that serve markets such as recording studios, concert halls, houses of worship, commercial cinema, automotive and many more.

AudioControl (audiocontrol.com) is an innovative manufacturer of high-performance audio solutions for the residential, commercial and automotive markets and the company has long been associated with Studio Six Digital, reselling some of its audio test and measurement solutions, but also co-developing some useful solutions for integrators, such as the AudioControl DM-RTA compact audio analyzer. This dedicated hardware unit (see image below) enables integrators to overcome acoustic challenges and calibrate their systems, combined with the powerful analysis software designed to provide integrators with the features of a fully functioning Oscilloscope, Voltage Meter, Real Time Audio Analyzer (RTA), SPL Meter and Polarity Checker. The DM-RTA panel features balanced XLR, phono and RCA style unbalanced inputs, as well as speaker level inputs. Digital outputs include Optical, COAX and USB. The DM-RTA is powered by a 5-hour rechargeable battery so that it can be effortlessly deployed anywhere.

At InfoComm 2019 in Orlando, the Studio Six Digital display was effectively a whole half of the AudioControl booth, showing all the measurement microphones, audio interfaces that complement the audio test and measurement software and apps available for the iOS platform, and which have already generated over 1 million app downloads worldwide. Continuously updating these solutions, Studio Six Digital's popular AudioTools suite of test and measurement tools is now fully compatible with the latest iOS and iPhones, XS, XS Max, and XR, as well as the latest iPad models. The AudioTools App is currently available in version 10.2X and Studio Six Digital has upgraded the solutions to make sure they also work with the latest iPad Pro models, which use already an USB Type-C connector, and are extremely powerful mobile computers - ideal for serious field work.

Among the highlights was the latest uTestMic, a professional-grade, calibrated, USB-connected test and measurement microphone that also includes an auxiliary audio output jack. The uTestMic is compatible with any device that supports USB audio, including smartphones, tablets, and computers. It is equipped with a USB A connector, and includes adapters for USB micro and USB-C connections. It also works with the Apple USB to Lightning and USB to 30-pin adapters. Every unit is tested and calibrated at the factory, and a unique individual calibration file is stored in the cloud. Anyone using AudioTools can just go to the microphone setup page and tap the “Get File” button and enter the serial number. For other software platforms, users can just upload the uTestMic Calibration File tool - it connects to every platform, and works with every app.

For more critical applications, Studio Six Digital introduced the uPrecisionMic, a USB-C connected precision Class 1 microphone, which can be directly connected to the latest iPad Pro, many Android smartphones and Mac and Windows computers. The uPrecisionMic uses a metal diaphragm capsule purposely built by ACO Pacific, while the body of the microphone holds a completely redesign of the existing Studio Six Digital precision USB connected microphone. The result meets ANSI and IEC electrical and acoustic Class 1 standards and is factory calibrated to +/-0.1dB using a NIST traceable pressure-compensated calibrator. The calibration factor for both high and low ranges are recorded on the factory calibration card in dBFS, so that application software can be calibrated to provide an absolute SPL level.

The uPrecisionMic body is a nickel-plated solid bronze tube that is threaded to accept a standard 1/2” microphone capsule. All of the active electronics are in the microphone body, including the microphone preamplifier using a 5 gigaOhm input impedance resistor, precision 24-bit A/D converter, and the logic circuitry required to communicate over a USB digital audio link.  The uPrecisionMic connects to the USB host device with a USB type C connector using a 1m (39”) cable, but users can still use any standard passive USB-C to USB A or micro adapter, for older devices. The useful analog output - a standard 1/8” (3.5mm) stereo jack, line level - is available for sending audio test signals to the devices being tested. The output level can be set from the device that it is connected to, for example on a Mac, from the system preferences panel, or on Windows, the audio output control panel. According to Studio Six Digital, the uPrecisionMic is in pre-order and will ship very soon.

Finally, the company's popular iPrecisionMic - the first professional Class 1 microphone available for any iOS device equipped with Lightning connector, was now updated also with an audio output - to allows sending test signals directly from the microphone - and an improved charging system using a standard 5V 1.8mm connector. When combined with the company's AudioTools app, the iPrecisionMic can be part of a Class One certified system, which requires no setup when connected and provides instant, calibrated SPL measurements.

When users connect the iPrecisionMic to any iOS device with the AudioTools app, it automatically unlocks the SPL Pro and SPL Graph modules (including octave band logging), adding to the other free modules in AudioTools, like RTA, FFT analyzer, SPL Meter, and Generator - a complete test & measurement package. Further modules can be acquired, like the STIPA speech intelligibility or Smaart or LARSA for room correction and sound system setup.

And for users that want to use their own specific/favorite measurement microphone with the AudioTools software, Studio Six Digital is also shipping the updated iAudioInterface2, designed from the ground up to work with all Apple iOS products or any Mac and PC computer, using the included Lightning and USB cables. The microphone connects to the interface using a standard XLR input with 48V phantom power.

On the software side, Studio Six Digital is always updating the popular AudioTools app, and the latest tool that was added to the app is a useful Sound Level Control that allows to automatically control the sound level in a club or music venue. The company has also made it easier for users of AudioTools that have already acquired some of the options, to simply get a better price when unlocking all the remaining tools if they so wish.

We were very pleased to see that Studio Six Digital had already made the move to supporting USB-C and the new iPad Pro. Since Apple has released the new iPads that have USB-C connectors rather than Lightning, there was a lot of excitement in the market, but also some frustrations. For instance, companies like Studio Six Digital are able to make existing products to work with USB-C and the new iPad Pro, but there is no way (yet) of using existing Lightning-only products with an adaptor. At least until Apple updates the specifications, which is probably going to happen with the new iPadOS.

The new dBPod Meter
Again on the hardware side, Studio Six Digital has been working on a new development, which was previewed in prototype at InfoComm 2019. It's called dBPod, and it's basically a local/remote audio monitor with color LED sound level indicators, wireless AudioTools interface, and Vibration Analyzer. Designed for use during system setup and installation, and also as an installed sound monitor, dBPod opens new possibilities in sound monitoring. 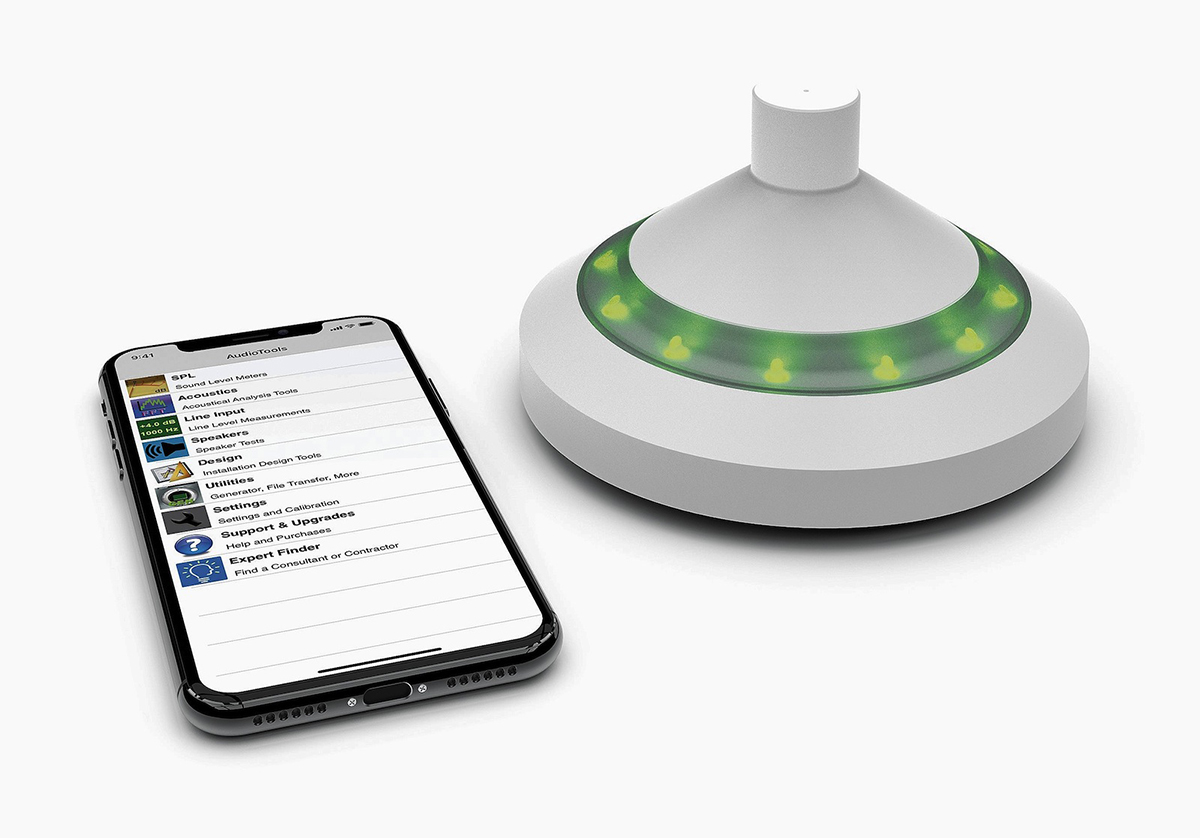 As Studio Six Digital explained, the dBPod is a WiFi-enabled Class 2 SLM that is set up by an app. It measures A/C/Z frequency weightings and octave bands, and the colored LEDs on its surface react to the dB levels that are set in the app. Users only have to mount the dBPod using the unique twist-mounting ring attached to any surface, supply it with USB-C audio, and setup using the dBPod app. The color LED ring then shows whether sound levels are within the limits, or above local regulations. For long-term unattended monitoring, users can save data to a USB stick installed in the dBPod and retrieve up to 6 months of data. According to the company, there will be also a water resistant kit available.

Using the app, users will be able to use the dBPod not only to monitor SPL levels, but also to check frequency spectrum directly on any iPad, iPhone, or Android device over WiFi. The unit features a built-in MEMs microphone array, a battery to provide up to two hours of wireless operation, and there's also an analog audio output and 3-axis vibration sensors, which will be connected to a brand new VibrationTools app, coming Q4 2019. Exciting stuff!
www.studiosixdigital.com
related items