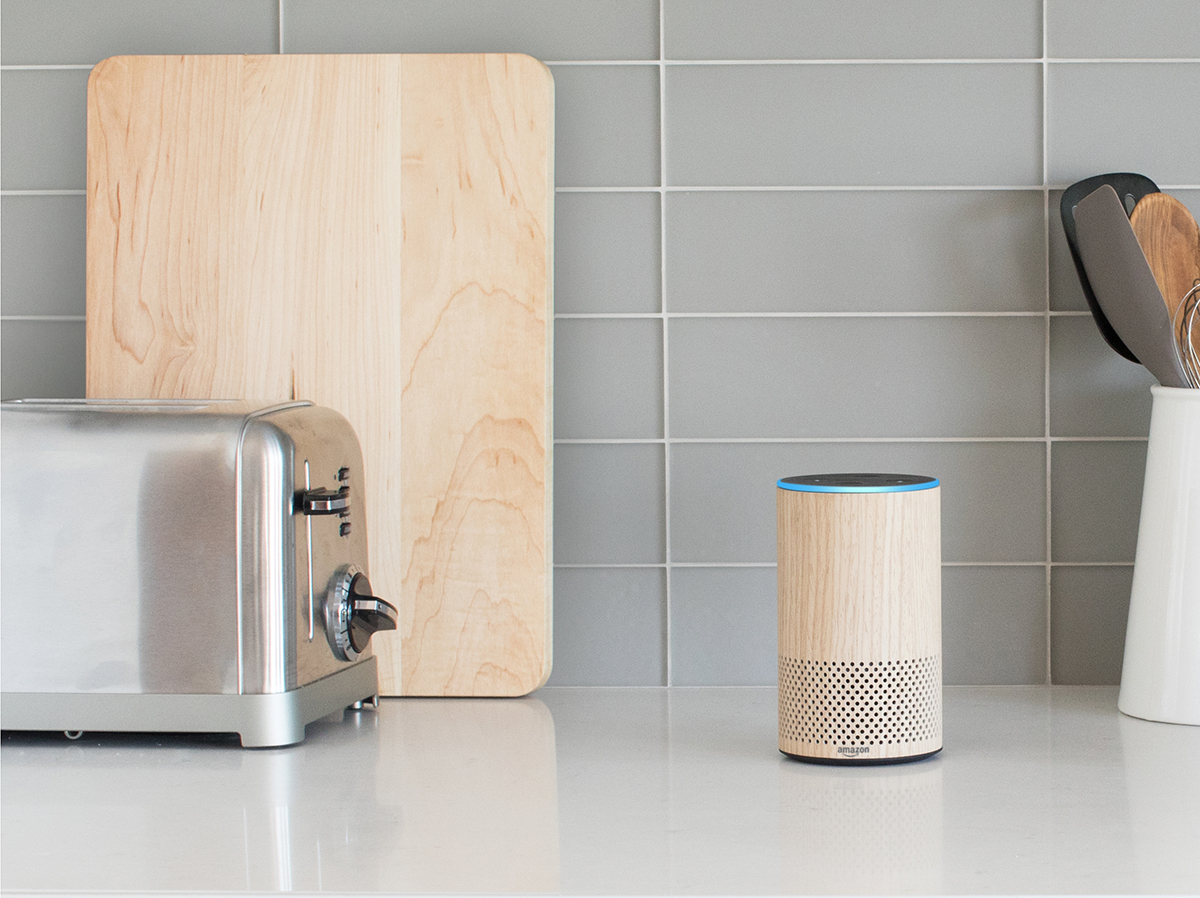 Three years ago, Amazon introduced Echo and Alexa, offering a new way to interact with technology using just voice. Now, Amazon introduced the next generation of Echo: the all-new Echo with a new design and improved sound for just $99.99, and Echo Plus with a built-in smart home hub for just $149.99.

Amazon's announcements on the all-new Echo are particularly impressive. The new flagship smart speaker combines all known features of the Alexa voice interface, now with a new design, new finish options that make it similar to other more expensive smart speakers, improved sound with Dolby processing, better far-field voice recognition, and a lower price, at just $99.99. And for that price, users can pick the Echo with new finishes such as charcoal, sandstone, heather gray, oak veneer, walnut veneer, and silver.

Together with the revamped standard Echo, Amazon introduced the new Echo Plus, which has a built-in smart home hub to easily connect smart devices — set up and start controlling lights, locks, and more in minutes — at just $149.99, with a Philips Hue smart lightbulb included in the launch promotion, "while supplies last!" This is a powerful move from Amazon to dominate the smart home space, introducing new routines to control multiple devices and actions with a single voice command — for example, users can say simply, “Alexa, good morning,” and Alexa will turn on the lights, start the coffee machine, and read the day’s forecast. Also, Alexa now also includes a new phone calling feature that offers free outbound calling from Echo devices.

"Three years ago we introduced the first Echo, powered by Alexa, with a goal to fundamentally simplify and improve the way customers interact with their homes,” says Tom Taylor, Senior Vice President, Amazon Alexa. “Today, Alexa can make calls, play music in every room, turn on your lights, and even order you a pizza. But it’s still day one, and today we’re making Echo and Alexa even better. The all-new Echo and Echo Plus deliver better sound, all new far-field technology, and new features we think customers will love.”

The new Amazon Echo tries to step-up its technical specifications in terms of audio, now featuring a better driver arrangement that is able to fill any room with sound, while delivering next generation far-field performance. The all-new speaker architecture features a dedicated tweeter, a 2.5” down-firing woofer, and Dolby processing — all in a smaller design and at an even more affordable price. The new Echo uses Amazon’s second generation far-field technology, which features better wake word processing, improved beamforming technology, and enhanced noise cancellation. The Echo far-field technology works to detect the wake word from across the room even in the noisiest parts of the home. 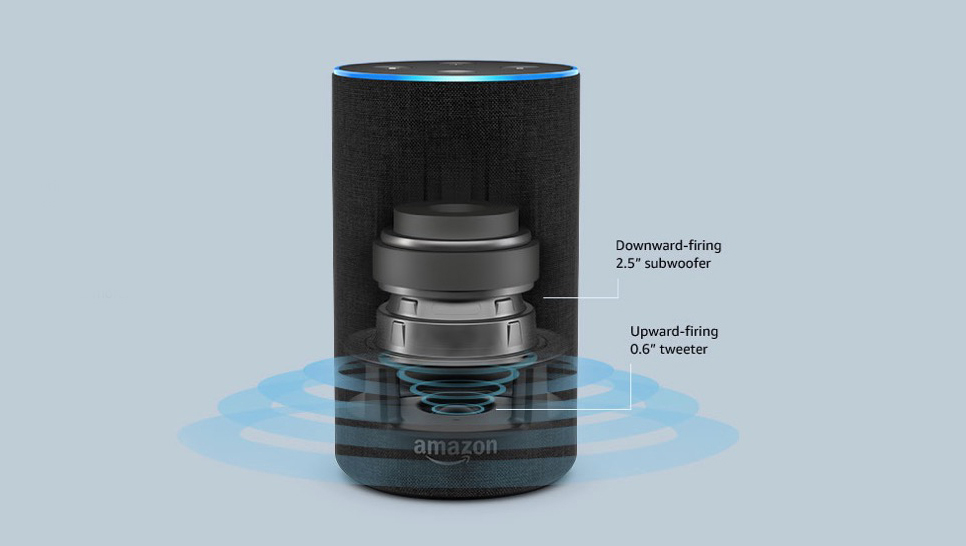 And for those users demanding more, Amazon created the new Echo Plus for $149.99. It is basically a smart speaker dedicated to home automation, being able to connect to compatible smart home devices. With customizable voice-command routines, users can automate a series of actions, compatible with products from leading brands. Users can just say, “Alexa, discover my devices,” and Echo Plus will automatically discover and set up compatible lights, locks, plugs, switches, and more without the need for additional hubs or apps.

Of course, those devices are sold in Amazon.com and now include a variety of ZigBee products from leading brands such as Philips Hue, GE, Kwikset, and more. This is a very significant announcement for the ZigBee alliance (www.zigbee.org), which just recently announced updated mesh networking technology that improves interoperability between smart devices, working on 800-900 MHz and 2.4 GHz ISM bands.

The new Echo Plus was also designed to be an add-on for homes that already own Alexa-enabled devices, including previous generations Echo speakers. Amazon cleverly introduced improved smart home groups, allowing users to create zones and associations, which enable Alexa to act intelligently on user's request. For example, the user walks into the kitchen and simply say, “Alexa, turn on the lights” rather than “Alexa, turn on the kitchen overhead lamp.” This feature will be available on the all-new Echo, the previous generation Echo, Echo Dot, Echo Show, and Echo Plus. 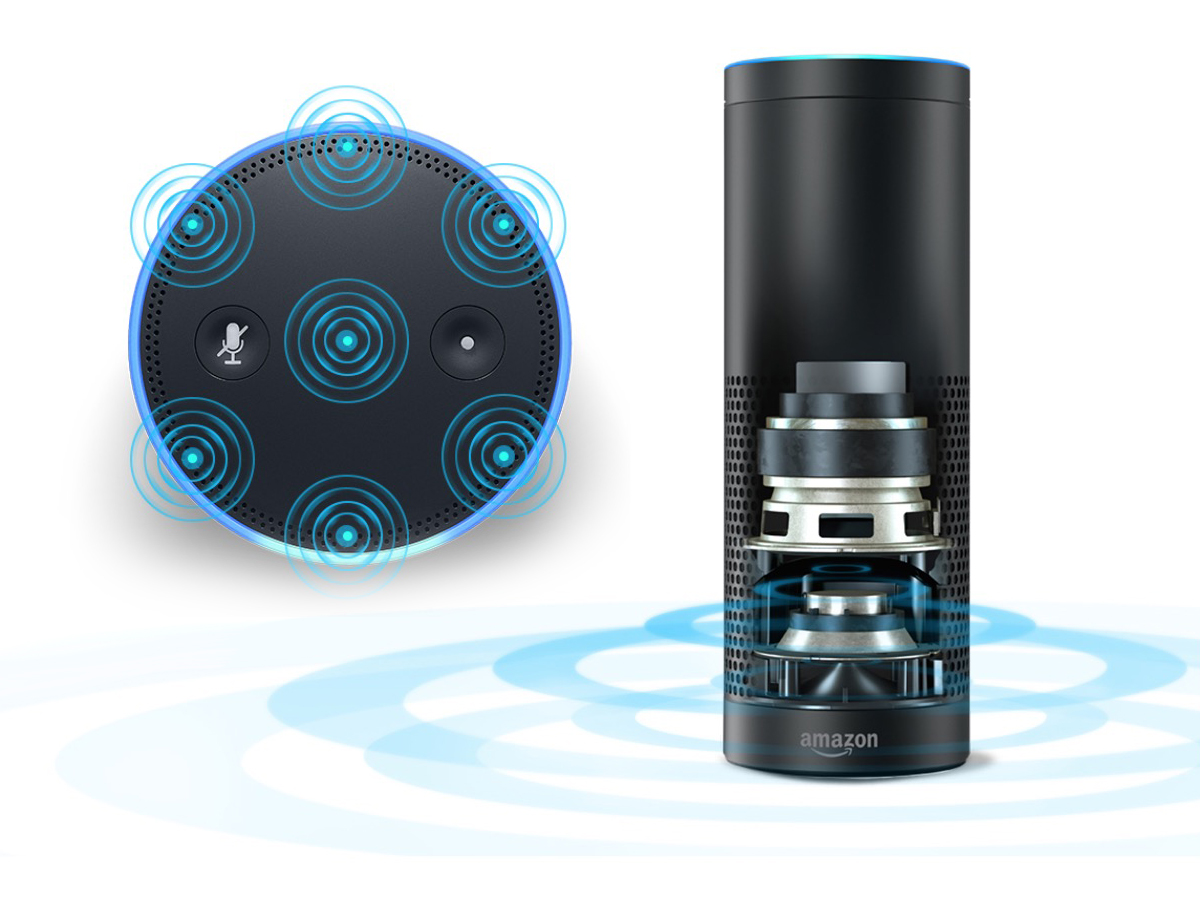 But apart from being a powerful smart home hub, the Echo Plus is also an improved speaker with better performance. The Echo Plus has enhanced 360-degree omni-directional audio, with Dolby processing. Basically maintaining the enclosure diameter of the original Echo, the Echo Plus features a 2.5" downward-firing woofer and 0.8" tweeter, both optimized for 360° audio. Since Amazon now supports multiroom audio, it's easy to see how many existing Echo users in the US, UK and Germany will simply order another one and just distribute the devices in different rooms.

More importantly, under the light ring of the Echo Plus is an array of seven microphones that use beamforming technology and enhanced noise cancellation, allowing for improved wake-word performance, even in noisy environments or while playing music at loud volumes. Also important are updated Wi-Fi connectivity specs, now supporting dual-band 802.11 a/b/g/n/ac (2.4 and 5 GHz) and Bluetooth with updated Advanced Audio Distribution Profile (A2DP) support for audio streaming, Audio/Video Remote Control Profile (AVRCP) for voice control of connected mobile devices.

New Echo Connect and Buttons
Four months ago, Amazon introduced Alexa calling and messaging, and millions of users have started using the feature. Now, Amazon is expanding this feature to include support for free outbound calling to phone numbers within the United States, Canada, and Mexico. Users just say “Alexa, call Mary’s mobile,” and Alexa will call Mary’s mobile phone from a user's smartphone contact list. Alexa can also dial phone numbers that the user speaks, to reach people or businesses that aren’t in contacts. This feature is available for all Echo, Echo Dot, and Echo Show devices only in the US, for now.

Amazon also introduced Echo Connect, a new Alexa accessory that turns any Echo device into a high quality, hands-free speakerphone for the existing home phone line. Echo Connect works with existing home phone services – either landline or VoIP. Without touching a single button, users can ask Alexa to call anybody from their contact list – and the person being called, will see the home phone number as the caller ID. When someone calls the home phone, Alexa will announce their name from a contacts list — and users can just ask Alexa to answer to start the conversation.

Echo Connect is simply connected to a home Wi-Fi network and home phone jack or VoIP adapter, and users can activate the Alexa app on their mobile phone to set up Echo Connect. Echo Connect is just $34.99 and will be available later in 2017. 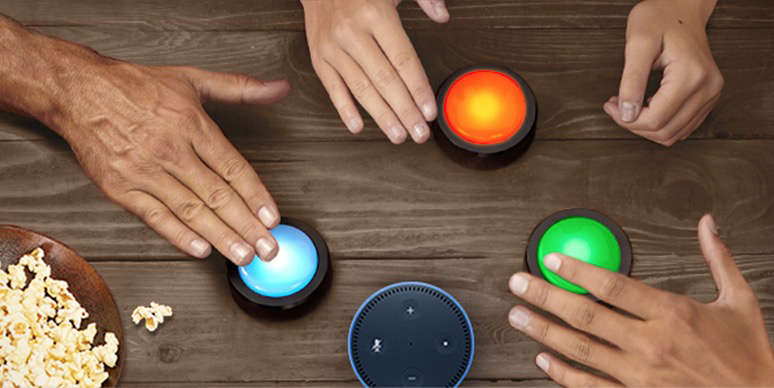 Also new are Amazon's Echo Buttons, a series of new devices that allow users to play games with friends and family using Alexa. The buttons illuminate and can be pressed to trigger a variety of multiplayer and interactive game experiences. There will be a number of new Echo Button-compatible skills available this holiday season including Sounds Fun with Mike Epps, Buzzer Beater Basketball Trivia with Karl-Anthony Towns, Fourth Down Football Trivia with Philip Rivers, Full Count Baseball Trivia with Buster Posey from Ground Control, as well as Beat the Intro from Musicplode. Echo Buttons will come in a two-pack, priced at $19.99, and will arrive in time for the holidays in the US, UK, and Germany.

Amazon states that Echo Buttons are the first of many Alexa Gadgets, a new collection of accessories that "enable fun and playful Alexa experiences." The Echo Buttons have not yet been authorized as required by the rules of the Federal Communications Commission and shipping confirmation will be confirmed later in 2017 together with the Echo Connect device. The new Amazon Echo and Echo Plus speakers are available for pre-order and will start shipping October 2017. 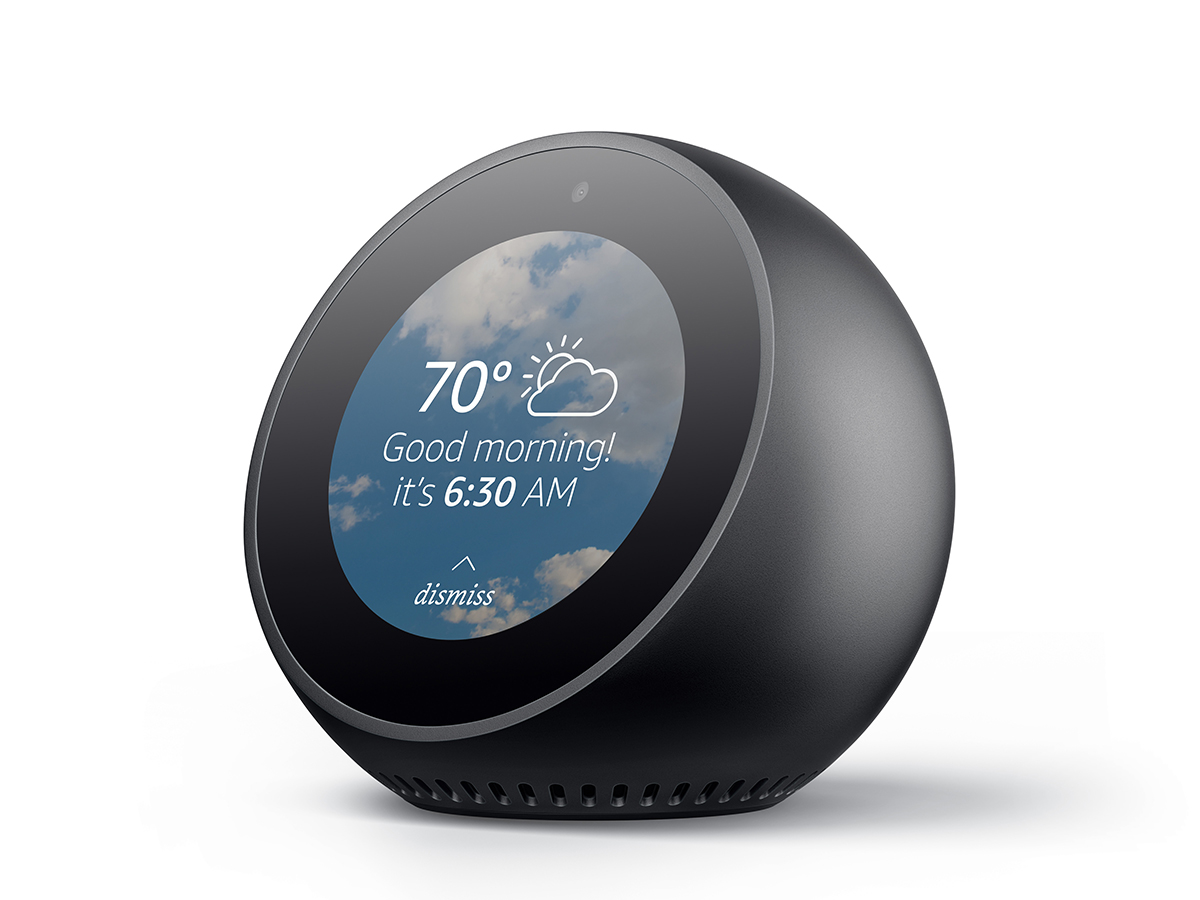 The new member of the Echo family, the Echo Spot is designed for bedroom nightstand, desk, kitchen counter, or side table so Alexa can show news, weather, smart home camera feeds, video calls, and other Alexa skills. The smaller and affordable design, for just $129.99, will begin shipping in December, and basically will combine all the features of an Echo Spot with the color display of Echo Show. Even with its small size, it features a 2W 1.4" driver, enough to be used as both a smart alarm clock and background music device.

The Echo Spot also features Amazon's second generation far-field technology with four microphones, acoustic beam-forming technology, and enhanced noise cancellation. Interestingly, Amazon says that if users will have more than one Echo - and this will be clearly the case with the new models - Alexa will respond intelligently from the Echo that's closest to the user, thanks to ESP (Echo Spatial Perception).

For those placing the Echo Spot in the bedroom or bathroom, just remember that the device has a front-facing camera, just like the Echo Show. It also features an audio-out connection to use with more powerful speaker systems. It will be available in black and white for $129.99 and will start shipping in the US in December 2017, and will be available in the UK and Germany early in 2018. 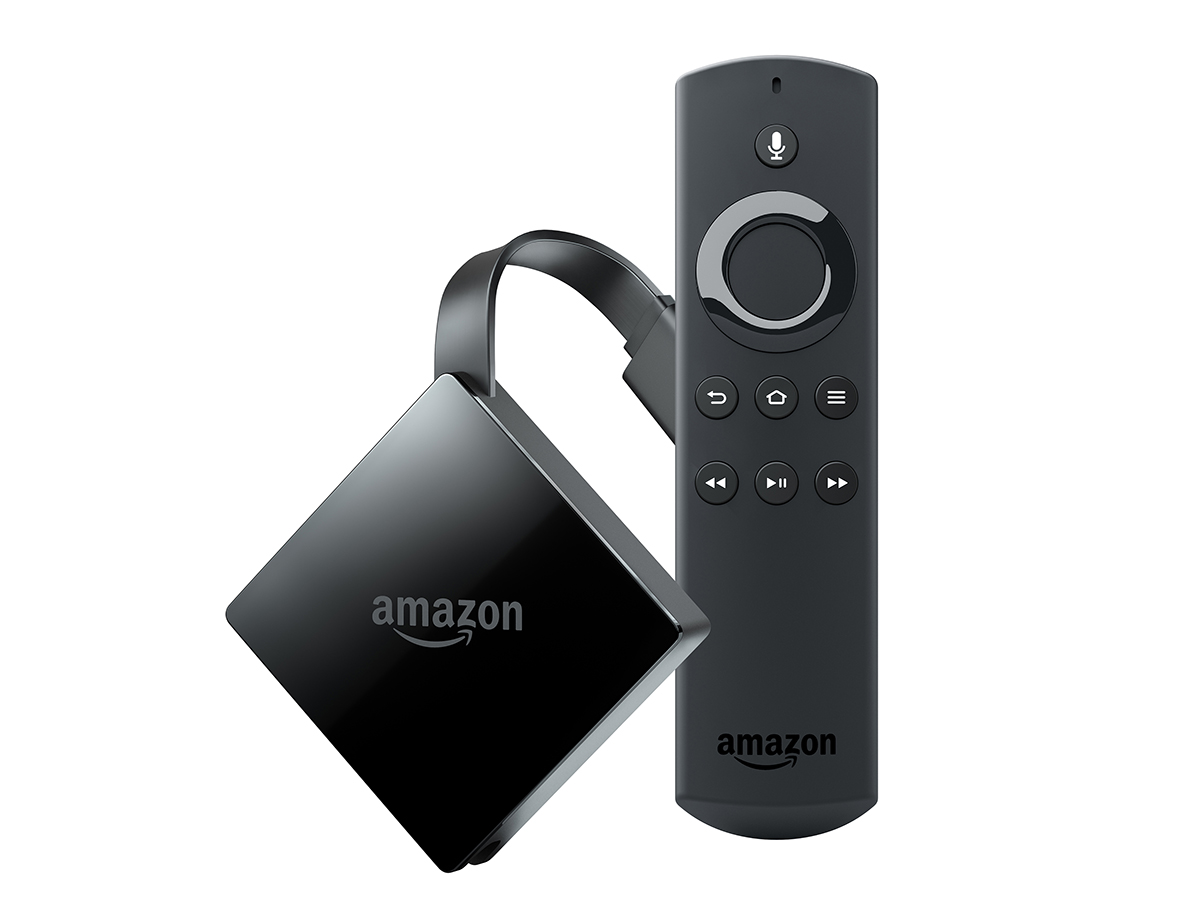 The other new device is basically a clever response to both the Google Chromecast and the just-released new Apple TV 4K. Amazon in fact managed to combine everything that's on the new Apple TV 4K, in a device that follows the extremely compact format of the Chromecast, for just $69.99. The new Amazon Fire TV adds 4K Ultra HD and High Dynamic Range (HDR) support, and adds the Alexa Voice Remote (similar to what Apple did with its Siri Remote idea). Forty percent more powerful than a Fire TV Stick thanks to a new 1.5GHz quad-core processor and 2GB of memory, the next generation of Amazon Fire TV is able to process 4K Ultra HD HDR pictures at 60 fps, and with Dolby Atmos audio and HDMI audio output, with pass through up to 5.1. It will start shipping in U.S. on October 25.

Of course, Amazon is already promoting a series of bundles for the new devices, as well as packages of content access in its Amazon Video and Prime services.
www.amazon.com
related items