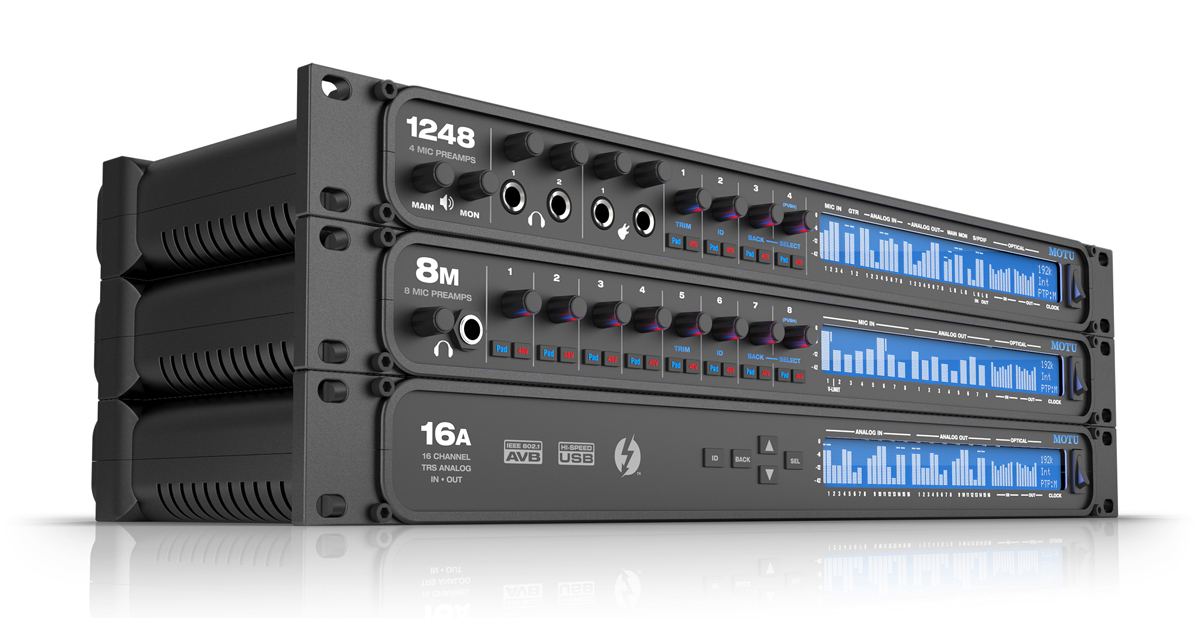 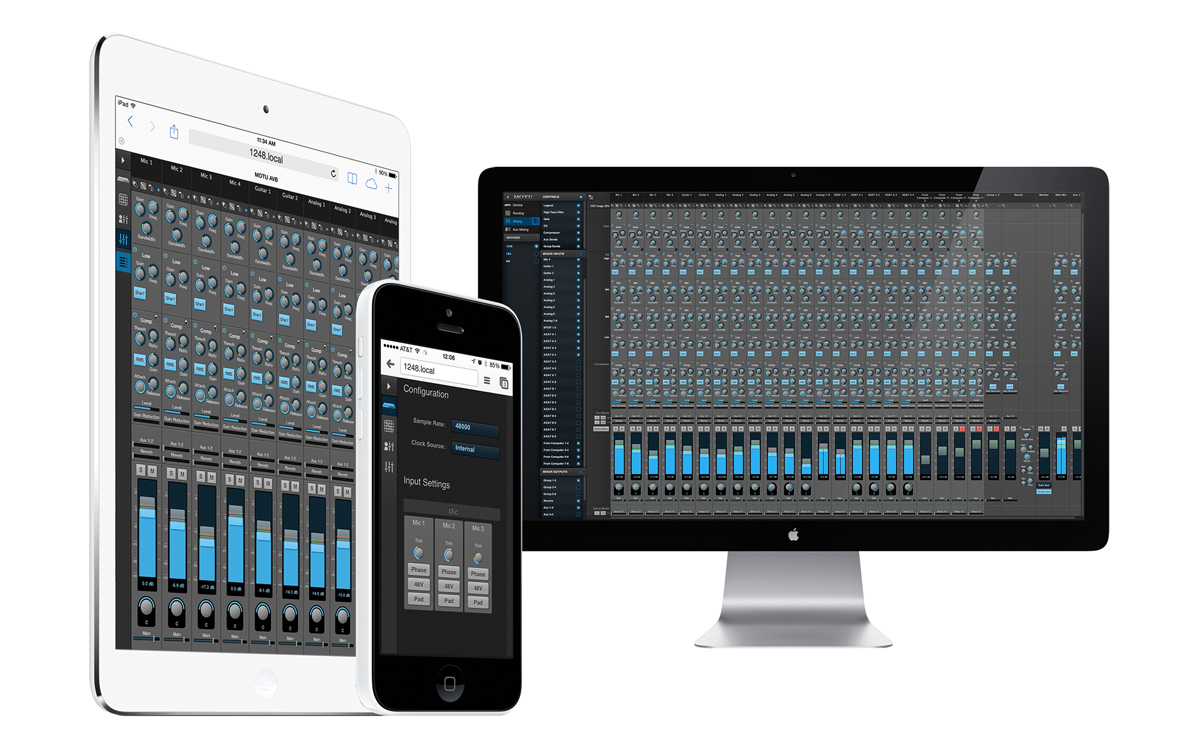 The mixer's 48 inputs can take signal from the physical inputs on the interface itself, audio channels from host software on the computer, audio network streams and mixer outputs. The mixer provides 7 stereo aux busses, 3 groups, a reverb bus that can alternately serve as a 4th group, a Main Mix bus and a separate Monitor bus that doubles a solo bus. Effects include classic reverb, 4-band modeled analog EQ, modeled vintage compression and gating. A flexible matrix routing grid makes it easy for users to route audio to and from the mixer, the computer and audio network streams, including the ability to split a single input (or input pair) to multiple destinations.

All three interfaces are equipped with a single AVB Ethernet network port, allowing to add a 2nd MOTU interface to their system with a simple CAT-5e Ethernet cable or build a system of three to five interfaces connected to the five-port, 1-Gigabit MOTU AVB Switch. By daisy-chaining additional MOTU switches (or 3rd-party AVB switches), large-scale networks can be installed in multi-room studios, performance venues, houses of worship, university music departments and other similar facilities.
Multiple computers can be connected throughout the network, and all devices and computers on the network can route audio to/from all others.

Each MOTU interface on an AVB network, or any computer connected through Thunderbolt, can simultaneously send and receive 128 channels of network audio I/O. A MOTU AVB network supports over 512 audio channels, and point-to-point network latency is fixed at only 30 samples (0.625 ms), even over multiple switches, when operating the system at 48 kHz. Any available network port, including the extra (6th) Ethernet port on the MOTU AVB Switch, can be connected to a standard Wi-Fi router (such as an Apple Airport) or directly to a local Ethernet network, to give complete access to device settings, audio routing features and the 48-channel mixer from a web app software running on a laptop, iPad, tablet, and smartphone.

Unlike other audio interfaces, which are controlled from a software application running on a computer, the control software for the MOTU 1248, 8M and 16A interfaces is a web app served from the unit itself to any web browser running on any web client connected through Thunderbolt, USB, Ethernet, or Wi-Fi. Through Wi-Fi, for example, each musician in a band could control their own headphone mix from their own iPad, with no computer necessary, even when operating just a single interface such as the 1248.

Introducing the 24Ai and 24Ao
The 24Ai and 24Ao are two new audio interfaces from MOTU that offer 24 channels of high-quality analog audio input or output in a single rack space, combined with three banks of ADAT optical, for a total of 72 channels of I/O. 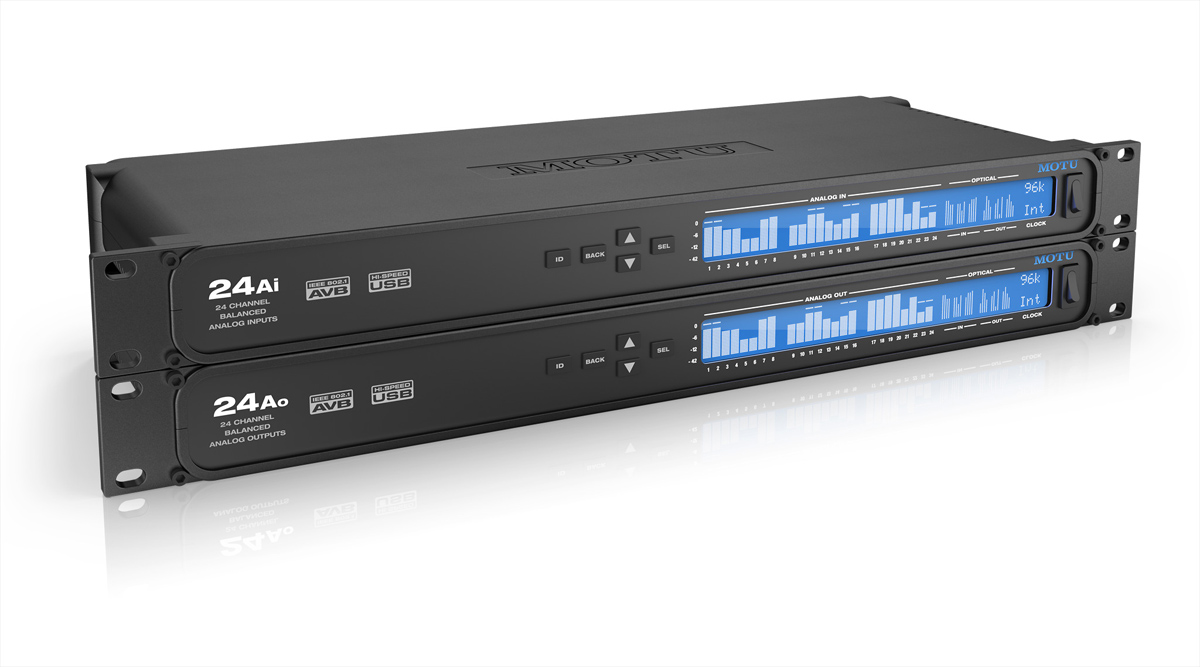 All analog I/O is supplied on standard DB-25 D-sub connectors or 12-pin Phoenix (Euroblock) connectors for studio and industrial installations alike. Similar to the 1248, 8M and 16A, the 24Ai and 24Ao are equipped with DSP-driven mixing/effects and AVB Ethernet. With all five AVB interface models, its possible to mix and match complementary I/O configurations and unify operation on a shared AVB audio networking platform.

The new 24Ai and 24Ao connect to a computer through universally compatible USB 2.0, which provides more than enough bandwidth for 24 analog channels, even for a system that includes both a 24Ai (24 analog inputs) and a 24Ao (24 analog outputs). For expansion, the new interfaces can be connected to Thunderbolt-equipped interfaces, such as the 16A, for 256-channel computer I/O, with the 24Ai and 24Ao units connected through AVB networking. All devices on such a network can stream audio to and from the computer, and everything can be controlled simultaneously from any computers, tablets, and smart phones connected to the network.