The new MOTU 1248, 8M and 16A audio interfaces provide Thunderbolt or high-speed USB 2.0 (compatible with USB 3.0), on-board DSP with mixing and effects, supporting a flexible 48-input digital mixer with dynamics modeled from British consoles. The new MOTU audio recording interfaces are also the first to use AVB audio networking for large multichannel configurations.
Mark of The Unicorn (MOTU) has announced three new high-end Thunderbolt audio interfaces: the 1248, the 8M, and the 16A. The company says the new interfaces are the culmination of years of R&D, each interface delivering a wide range of analog and digital I/O, A/D/A conversion with exceptionally high dynamic range, 48-channel mixing and DSP effects processing. 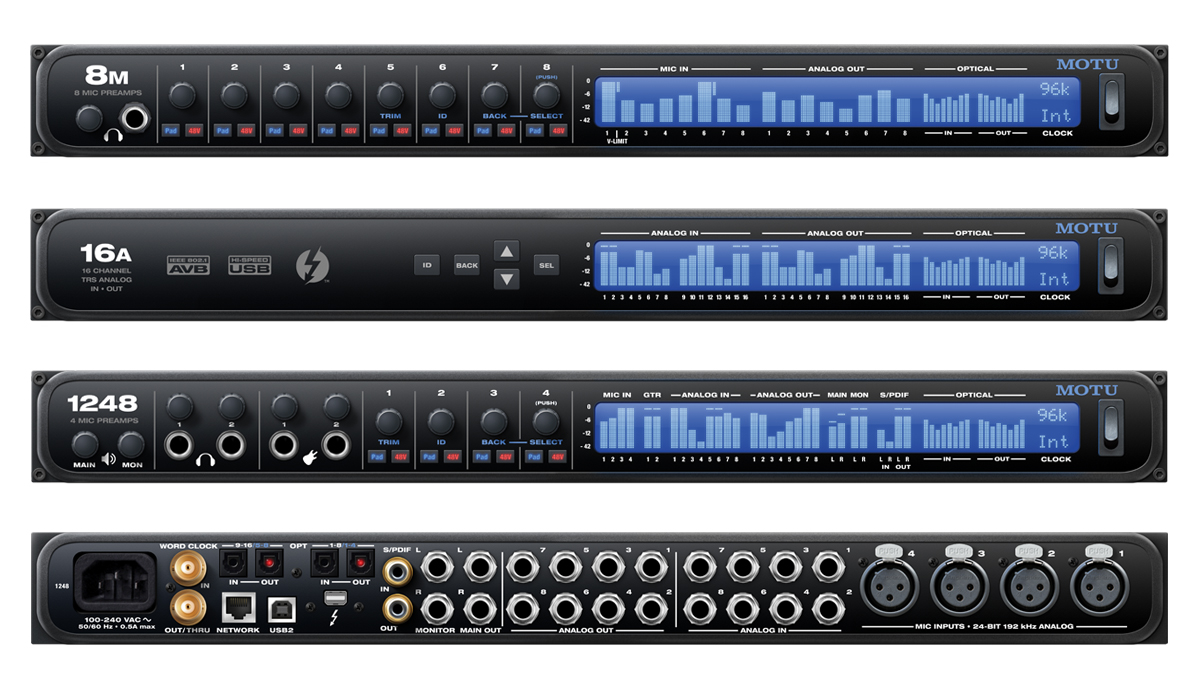 MOTU decided not to take any risks on these three new interfaces and offers universal connectivity to any computer, featuring Thunderbolt or high-speed USB 2.0 (compatible with USB 3.0), enabling the use of class-compliant firmware and industry standard drivers that work with any audio software—Windows 8 or Mac OSX. At the same time, MOTU surprises the market, being the first recording solutions manufacturer to offer AVB audio networking for system expansion.

Each interface packs serious I/O, starting with the flagship 48-input 1248 model, and enablng mix and match any combination of the three I/O’s to suit specific needs. Adding a second interface with a simple Ethernet cable using the new five-port MOTU AVB Switch, enables an expanded system of three to five interfaces with AVB audio networking (six or or more with additional switches). Regardless of the interfaces in the configuration, all three models share the same features.

All the interfaces have large LCD displays for level meters and menu navigation in the front panel and use an integrated universal power supply. The large backlit 324 × 24 LCD provides detailed metering for all analog and digital I/O.

The MOTU 8M model is an eight mic/line/instrument inputs and 8x line line out version, with one stereo headphone output and support for two banks (16 channels) of ADAT optical, one bank (eight channels) of SMUX optical and stereo RCA S/PDIF, featuring 24 inputs and 26 outputs (50 total) at 48 kHz, 16 × 18 at 96 kHZ, and 8 × 10 at 192 kHz. The front panel includes eight digital rotary encoders for mic preamp gains and 16 switches, including eight for 48-V Phantom power. 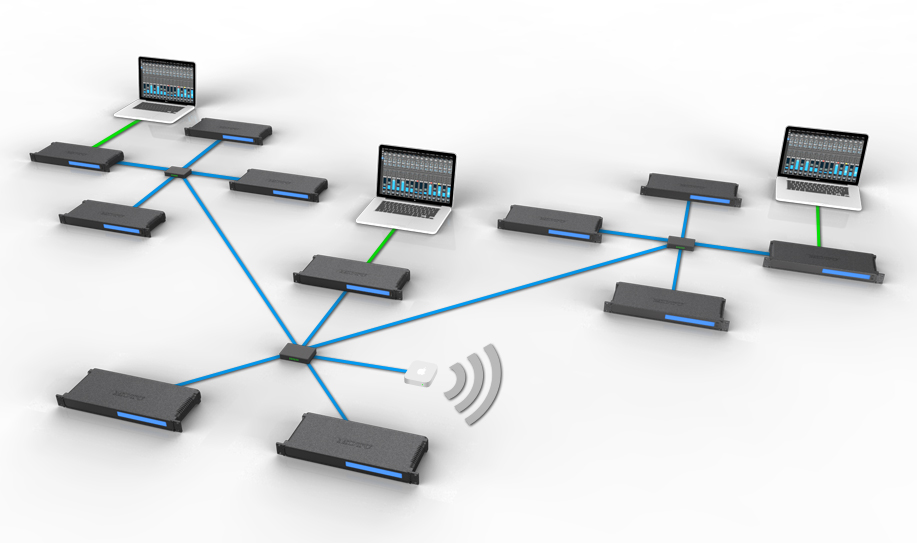 All three models can be configured for system expansion using the new MOTU AVB Switch, connecting up to five units per switch, using a simple Cat-5e Ethernet cable. Its possible to build a network with multiple interfaces and hundreds of streaming audio channels using standard AVB switches and network cabling, with ultra-low network latency, even over long cable runs (hundreds of meters). The network architecture supports flexible matrix-style audio routing and splitting for any analog or digital input, computer channel or network stream to any other output, computer, or network device. 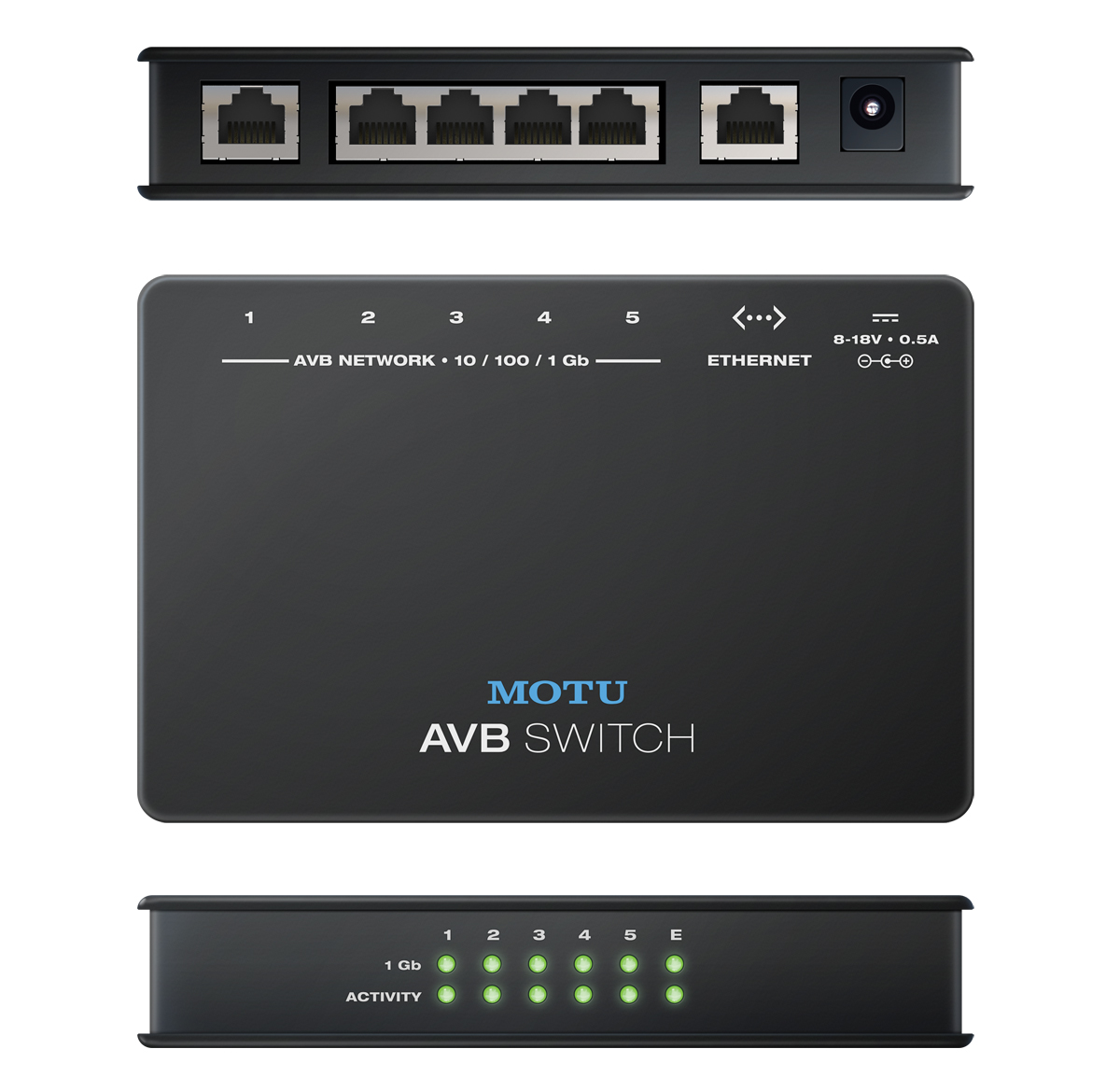 Through the Thunderbolt connection to a host computer its possible to record and monitor up to 128 networked audio channels in and out, simultaneously (256 channels). Web app control provides access to all the on-board DSP, mixing, device settings, and network audio routing, using any browser on a laptop, tablet or smartphone connected by wire or Wi-Fi.
Another interesting feature is the stand-alone mixing with wireless control, allowing to connect an Apple Airport device or other Wi-Fi router directly to the 1248, the 8M, or 16A with a standard Ethernet cable and control the powerful on-board mixing and DSP effects from any smartphone or tablet, without a computer. Great for live sound mixing.