Auro Technologies in cooperation with several partners demonstrated its immersive audio format at the 137th AES Convention in Los Angeles, showcasing Auro-3D recording, editing and play-back at various demo booths onsite. Fairlight also demonstrated its new immersive tools for audio at the AES, supporting Auro-3D, while Merging Technologies introduced its new 3D Panner, developed in collaboration with Auro Technologies.
Immersive or 3-D audio is hitting the headlines with daily announcements relating to cinema, consumer, broadcast, and even live sound, while the Society of Motion Picture and Televsion Engineers (SMPTE) continues to debate the merits of object-based sound and has created a working group to define a possible immersive audio standard. Two of the proposals under discussion include the Dolby Atmos system and the Multi-Dimensional Audio (MDA) format, supported by the MDA Cinema Proponents Group, a consortium that includes DTS, Doremi Laboratories, Ultra-Stereo Laboratories, QSC, Barco, and Auro Technologies. A decision on a new object-based sound standard is not expected soon and while the discussion continues Dolby Atmos is being installed in theaters around the world and is starting to make inroads also in the home-theater market.

Meanwhile, Auro Technologies - the creators of the Auro-3D format - is increasing its promotional initiatives in the consumer electronics market and the company recently announced availability of the new Auro-3D Mensa and Crux AV Sound Processors, developed in partnership with Datasat Digital Entertainment.  The partnership between Auro Technologies and Datasat Digital Entertainment, renowned in audio solutions for commercial and home cinema, was initiated with an Auro-3D license agreement signed in September 2013. Both companies have now worked together to create a range of Auro-3D branded processors dedicated to bringing immersive 3D sound to luxury home theatres worldwide. The Auro-3D Mensa AV Processor is a versatile and customizable high-end audio processor, while Auro-3D Crux is the first integrated 3-D sound home cinema processor for home cinema available at a lower price point.
The single file distribution and backwards compatibility of the Auro-3D format enables 3-D sound to be easily delivered into the home via Blu-ray discs, with playback in Stereo, 5.1 / 7.1 Surround Sound, and Auro 9.1 (up to Auro 13.1). Additionally, the integrated Auro-Matic technology allows existing native Stereo and Surround Sound content to be up-mixed, converting all legacy film and music into a natural 3-D listening experience. Auro Technologies says it will introduce its immersive Auro-3D sound format to more consumer markets, including mobile devices, gaming platforms, and headphones.

Auro-3D at the AES
Auro Technologies is also promoting the merits and capabilities of immersive sound production among the audio engineering community. At the 137h Audio Engineering Society convention in Los Angeles, there were several Auro-3D demonstrations and new solutions for recording, editing, and play-back in Auro-3D. 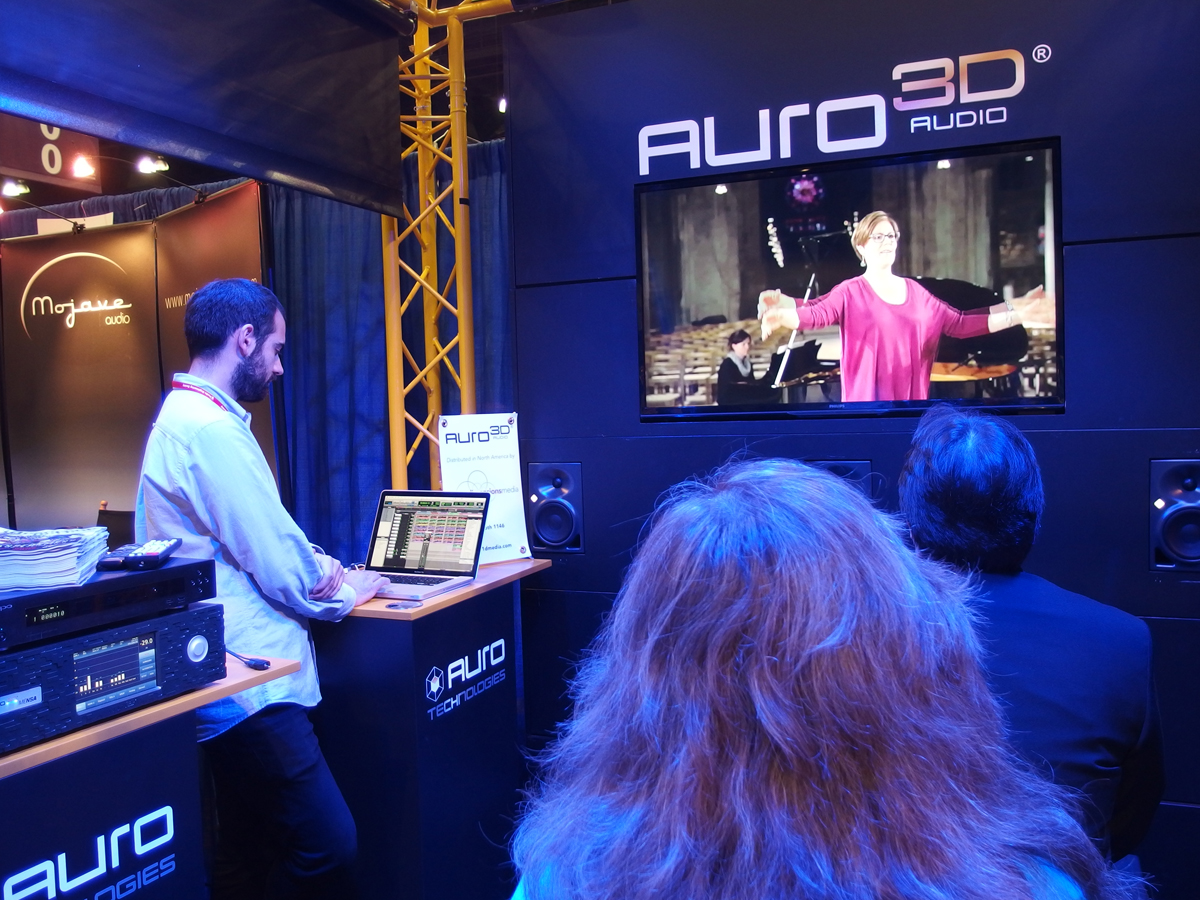 Auro Technologies was one of the sponsors of the 137th Audio Engineering Society (AES) Convention and various demo booths showcased recording, editing and play-back in Auro-3D and the exciting possibilities offered by immersive sound. The Auro-3D listening booth demonstrated the capabilities of surround sound with Height, featuring the new Auro-3D Mensa AV processor. In addition, Auro-3D was featured at the PMC demo room with demonstrations of Auro-3D content (with Auro 9.1 speaker lay-out) and presentations about working in Auro-3D from mastering and recording engineers, producers and musicians including Ronald Prent and Darcy Proper from Wisseloord Studios who have produced several albums in Auro-3D.

Auro-3D was also a featured demo pod at the Avid Pavilion with an hands-on demonstration of the Auro-3D Creative Tool Suite plugins and there was a technical tour of The Dub Stage, a leading independent audio post-production facility equipped with Auro-3D, located in Burbank, CA. The off-site tour included a presentation and demonstration of the existing Meyer Acheron Cinema Sound System, with 37 speakers and Auro-3D (11.1) Studio System for immersive 3D sound, built around an Avid Pro Tools HDX.

With immersive audio mixing the talk of the show, during the 137th AES Convention, Fairlight presented its 3DAW immersive and object-based production platform and advanced tools for immersive audio and live, broadcast and post production mixing. On display Fairlight had the 3D Audio Workspace (3DAW) immersive and object-based panning tool, supported by the the new CC-2 FPGA audio engine with Version 5 software. Available at the end of October 2014, 3DAW supports VST and RTAS plug-ins in addition to ASIO for I/O and sync sharing. The new 3DAW platform adds immersive audio panning to an existing digital audio workstation, enabling operators to remain within an established workflow, or may be configured as an all-Fairlight solution with a large-format mixer, 1,000-track recorder and 2K/4K video playback.

Fairlight’s 3DAW incorporates AirPan, which enables operators to control and position audio objects in three-dimensional space simply by moving their fingers in the air using a Virtual Reality-style input. Fairlight’s Spaceview visualization provides a 3D-like display of the spatial location and level contribution of the audio objects being manipulated. Cinema B-chain processing support for up to 34 discrete speaker outputs is also included in 3DAW. Bussing may be selected for all fixed 2-D and 3-D formats, from stereo through 5.1, up to NHK’s 22.2 as well as user-defined configurations, as well as object based formats including Dolby Atmos (via RMU) and DTS MDA.

Finally, Merging Technologies announced at the AES convention that its future 3-D panning and mixing engine will be incorporated in the next release of software for Pyramix and Ovation and will work seamlessly with Auro-3D creative tools. This new partnership with Auro Technologies means that the new panning and mixing engine will allow direct import of Pyramix files to the Auro-3D encoder, and that the plug-in decoder can be used with Pyramix to monitor the Auro-encoded stream.

Merging Technologies says the company has been following the developments in immersive audio and the trends most affecting its client base. Auro-3D is already a reality in D-Cinema with a strong theatre install base worldwide and leading post-production studios equipped with the Auro-3D studio system, as well as in other segments such as home entertainment, gaming and automotive. Moreover, a variety of Auro-3D recorded and remixed music on Pure Audio Blu-Ray has been released, from classical releases from 17-time Grammy-nominated audio engineer Morten Lindberg to Mando Diao’s new rock album and an exciting immersive audio-visual album from the German band, Lichtmond.

With more Auro-3D releases on the way, now being mixed at studios such as Wisseloord and Galaxy, and since many of these productions are being mixed and mastered with Merging’s Pyramix, smoothly integrating an immersive panning tool with the Auro-Codec technology was considered a logical step to take.

Pyramix files can be imported directly to the Auro-Codec Encoder and the Decoder plug-in can be used with Pyramix to monitor and QC the Auro-encoded stream. This significant advance is scheduled to be part of the reworking of the mixing engine which will feature in the next release of software for Pyramix and Ovation.

The 3-D panner is suitable to work with any format of object or channel-based audio and in parallel, Merging is involved with a number of national broadcasters that are evaluating technologies to bring immersive audio into the home. According to the Swiss company, while standards bodies such as the European Broadcasting Union (EBU) and SMPTE are debating the new technology, Merging is following these developments carefully and intends to ensure that its technology can be used in any circumstance.

The company’s Ovation Audio and Event Sequencer can already output and control multiple audio channels but the ability to be able to dynamically pan sounds, live or in response to pre-programmed cues, to an unlimited number of speakers arbitrarily placed in a 3D space, will bring exciting new possibilities to the innovative and more immersive public events now being designed. 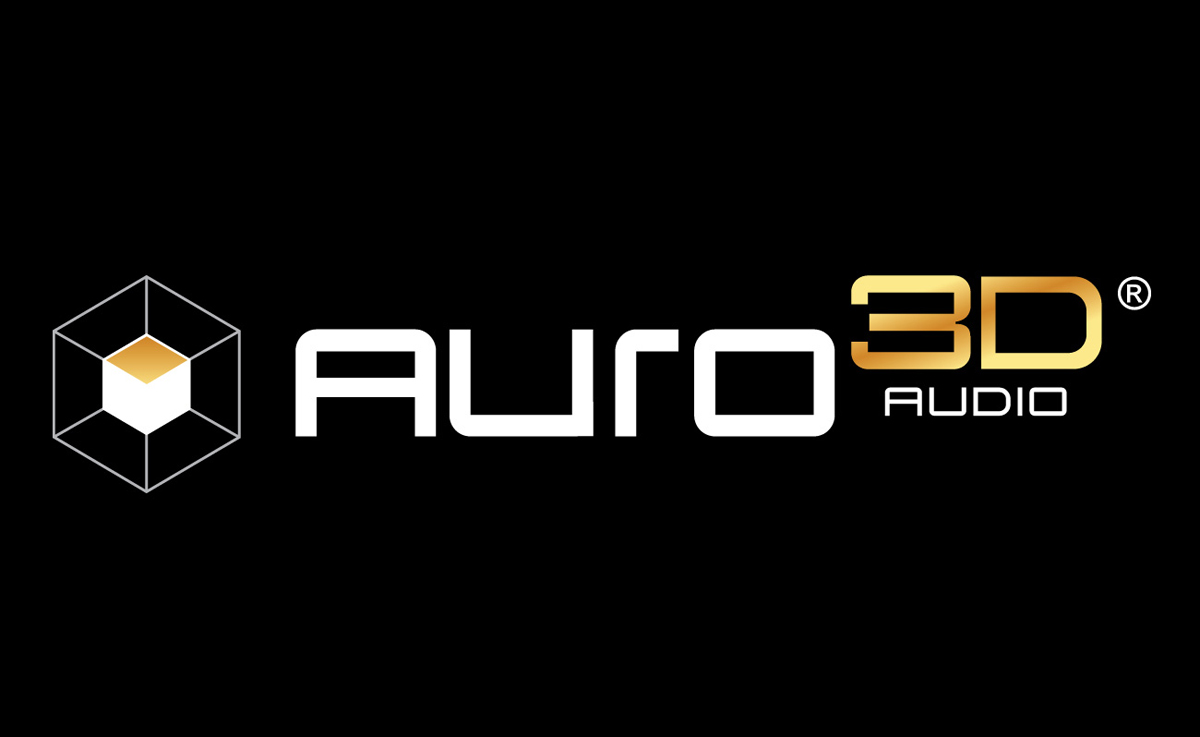 According to Merging’s Head of Software Development, Dominique Brulhart, the company looked at the various panning solutions available and the way the different formats were evolving. “Having our own specific needs for film post-production, TV post-production, live shows and high resolution immersive recording, it was pretty clear that we had to do more than just design a 3-D panning tool. We decided to implement our own pretty revolutionary 3D panning and mixing engine. In parallel, knowing that Auro-3D addresses post production, recording and live sound and already has consumer decoders available, logically led us to integrate with this technology at the earliest stage of our development so that the complete Auro-3D Creative Tool Suite will be available immediately upon the release of Pyramix 10. Opening up creative possibilities and addressing the high-end audio market perfectly matches our philosophy.”

Wilfried Van Baelen, CEO of Auro Technologies and inventor of the Auro-3D format commented; “As I have always been a fan of Merging’s expertise and quality, we are delighted that Merging have been able to align their new panning and mixing engine with the Auro-3D Creative Tool Suite. Being able to work seamlessly across Pyramix and Auro-3D will allow more creativity and a smoother workflow.”
www.auro-3d.com | www.datasatdigital.com | www.fairlightus.com | www.merging.com
related items