In this article, George Ntanavaras explains how to build a turntable speed measurement device using a microprocessor-controlled device that measures the speed of a turntable's platter. The project uses an Arduino board and the Arduino software IDE, and a micro sensor manufactured by Omron to sense the platter rotation. This article was originally published in audioXpress, June 2018.
This project explains how to make your own microprocessor-controlled device that measures the speed of a turntable’s platter. All the device’s components are housed in a small transparent plastic box and an external power adapter is used for the power supply. 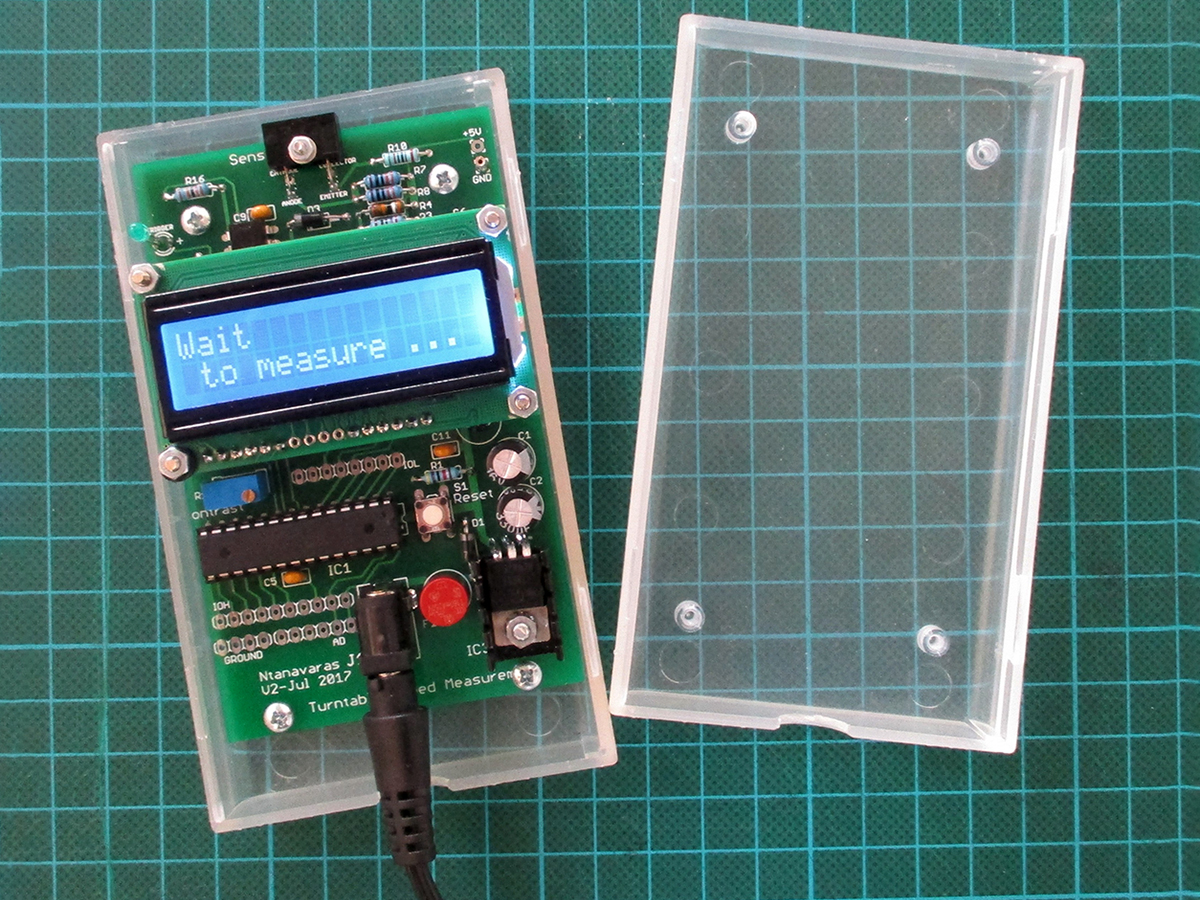 The TSM-100 was developed with the Arduino Uno hardware board and the Arduino software IDE. The device indicates the result of the measurement on a LCD with a resolution of three decimal digits. The accuracy is guaranteed by using as internal time base a crystal oscillator accurate to ±50 PPM (±0.005%) with less than ±5 PPM aging per year. The simple software code for the operation of the device is included in the article. It calculates the “rpm” for each revolution of the platter and the result is shown to the LCD with a resolution of three decimal digits.

To begin, the author used a compact photo micro sensor manufactured by Omron to sense the platter rotation. It incorporates an emitter of an optical beam and a detector. When an object passes in front of its sensing area, it reflects the optical beam of the emitter, thus changing the amount of optical energy reaching the detector. The sensor incorporates a visible light-intercepting filter, which allows objects to be sensed without being greatly influenced by the light radiated from fluorescent lamps.

For the detection of the platter rotation, a small reflective area is attached to the side of the platter, and as it spins, it reflects back the light emitted by the LED every time the reflective area is in front of the sensor. The photo transistor is triggered, turns on, and produces a short duration pulse, which is driven to a Schmitt trigger circuit to increase the noise immunity of the input signal and remove other disturbances.

The digital output of this circuit is directly driven to the microprocessor for processing. It also triggers another circuit, which outputs a low level (0 V) signal indicating to the microprocessor that a valid input was detected. Additionally it triggers a circuit that flashes a green LED, indicating to the user that a valid pulse has triggered the device, making the set up for the operation of the unit easier.

The microprocessor unit is the ATMEL ATMEGA328-PU. It is a low power CMOS 8 bit microcontroller based on the AVR enhanced RISC architecture. All the processing of the measurement is performed by the software running in the CPU. The result of the measurement is shown to the Alphanumeric LCD module, which is connected to the JP1 connector. I used a small LCD module with two lines of 16 characters.

All the components are placed on the PCB, to simplify the construction and a small semi-transparent plastic enclosure was used to house the PCB, so that the LCD could be read easily without any opening to the top cover of the plastic box. The complete parts list for the TSM-100 project can be found in the Supplementary Material section of the audioXpress website.

The author has available a small quantity of PCBs and programmed CPUs to build the device.
If you are interested, send him an email.
There is a short video showing the operation of the device.
You can watch it here:  https://youtu.be/CcEDCGx2WOw

You Can DIY!: High-End Class-D Audio Board for the Arduino MKR Family