InfoComm, is North America's largest audio-visual trade show, and the 2017 edition attracted more than 40,000 visitors for the first time in its history. That's 13% more than the last time it was held in Orlando, in 2015, and 14% more than InfoComm 2016 in Las Vegas, NV. As the InfoComm International Association confirmed immediately following its InfoComm 2017 event, the show was another record-breaking moment for this thriving sector, which now combines much more than AV commercial integration.
With very little time for the industry to fully take in the implications of Apple's massive announcements, the AV industry gathered once again in Orlando, FL, for another very positive edition of the InfoComm show. During that same week and ensuing days, the audio industry has seen some very significant announcements in terms of audio development platforms, which are clearly reflected in the momentum seen at InfoComm 2017, sometimes in not so obvious ways. 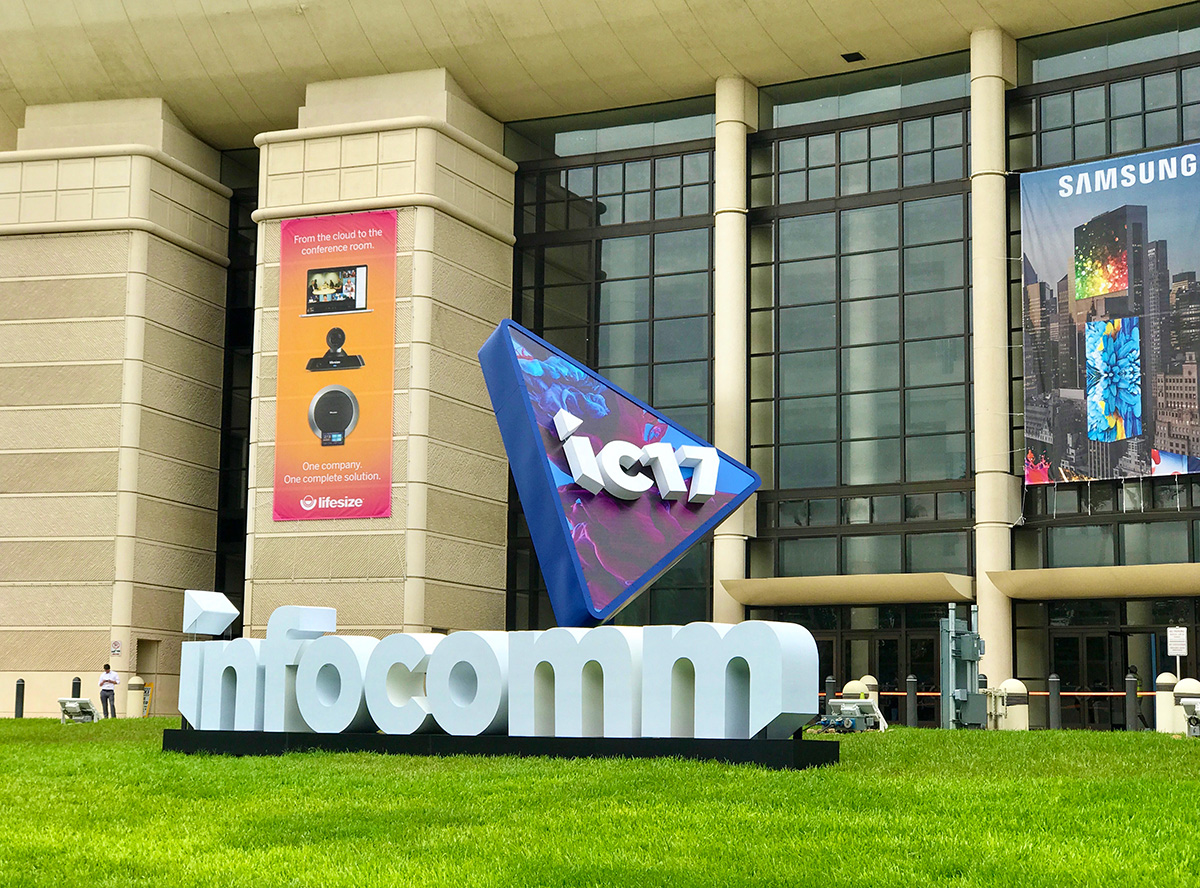 As the InfoComm International Association (infocomm.org) confirmed immediately following its InfoComm 2017 event, the show was another record-breaking moment for this thriving sector, which now combines much more than AV commercial integration, increasingly focusing on integrated systems, building, corporate, and event technologies. What InfoComm now increasingly refers to as Integrated Experiences.

InfoComm, is North America's largest audio-visual trade show, and the 2017 edition attracted more than 40,000 visitors for the first time in its history. That's 13% more than the last time it was held in Orlando, in 2015, and 14% more than InfoComm 2016 in Las Vegas, NV. As Jason McGraw, CTS, CAE, Senior Vice President of Expositions, InfoComm International noted, "the technology on display was amazing again, and we're thrilled with the tremendous response, but we're especially excited that guest after guest told us this InfoComm offered new and different experiences for our growing, innovative audience."

InfoComm is clearly a North American event, even if InfoComm 2017 attracted visitors from 117 countries, and 17% of attendees were from outside the US. The show's growth is increasingly visible in the success of its "converged" event, Integrated Systems Europe (ISE), promoted in cooperation with the Custom Electronic Design & Installation Association (CEDIA), which has now outgrown the two US shows combined. But the reasons for the growth are similar, with the sector increasingly attracting companies and business from other converging technology applications areas - from lighting and security to integrated (networked) control and digital signage, among others. Not surprisingly, this year, 39% were first-time visitors.

Among the show's 950 exhibitors, gathered in the more than 545,000 net ft2 of exhibits, demo rooms, and special events, there was a clear focus on new conferencing and collaboration technologies, while much of the audio systems on display targeted new and improved experiences for events, retail and public spaces. On the visual side of things, there is a clear trend for larger and more sophisticated displays - with new LED systems now allowing for flexible surfaces, all shapes and sizes - even amazing double-sized screens - and with impressive resolutions. Now with minimum 4K resolutions and up, and pixel pitch already in a nearly invisible 1 mm gap, no wonder LED screens are replacing projection systems in commercial installations, especially for outdoor and public spaces applications. But improving LED and OLED multi-displays are also having a strong effect on corporate environments, inspiring new working and collaboration spaces, precisely the segment that's also moving faster on the audio front.

Everywhere we looked, in the audio and communication/conferencing zones of the show, we could find examples of technology evolution, directly influenced by current trends in the consumer electronics and mobile segments. It's not just the increasingly seamless integration of updated Wi-Fi and Bluetooth wireless technologies, but also a direct consequence of all the ongoing development in new far-field voice capture technologies and beam-forming transducer arrays, both for microphones and speakers. As any visit to the Unified Communication and Collaboration exhibits revealed, all the research that is currently being applied to the growing number of voice-controlled speakers and devices  is clearly benefiting this application segment , inspired by the Amazon Echo and the availability of personal voice assistants from Amazon, Google, Microsoft, and Apple. 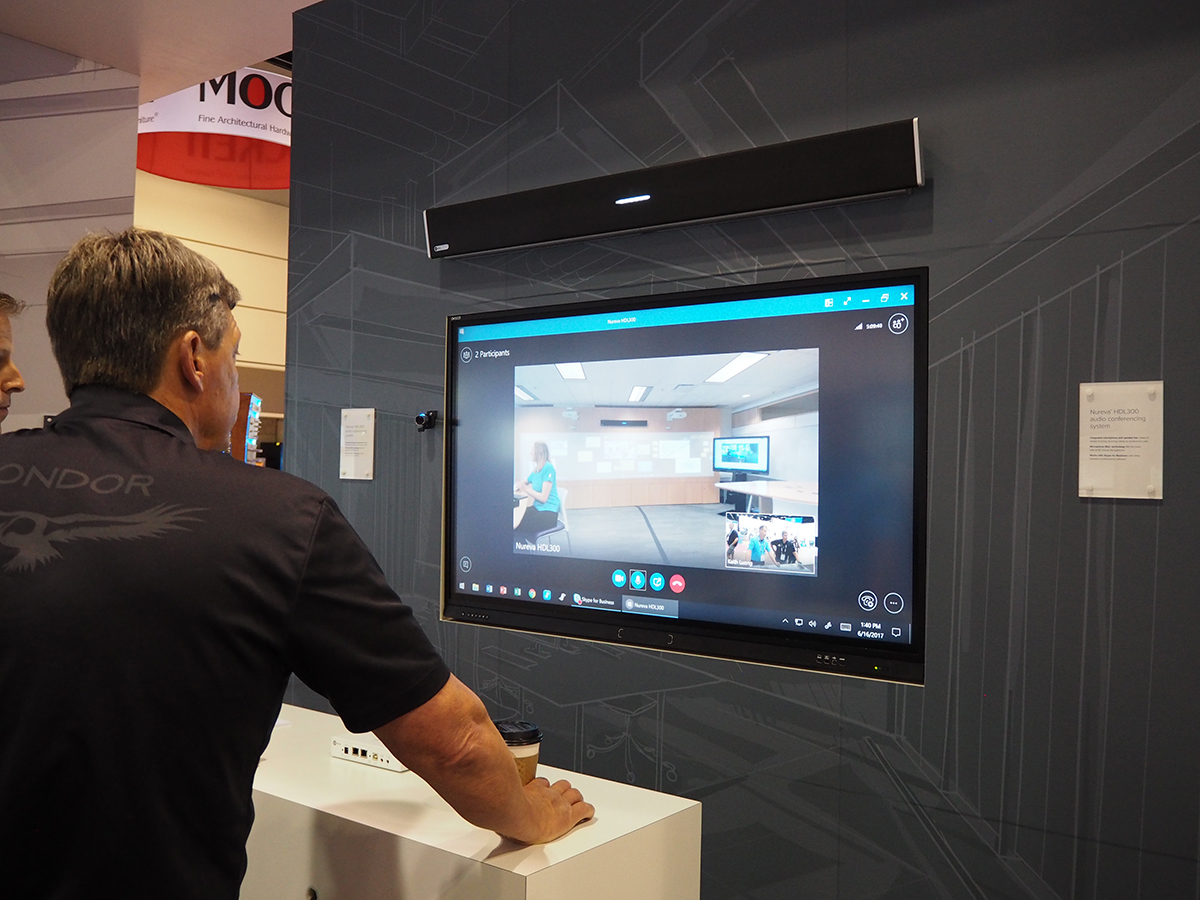 A clear example is the new Nureva HDL300 Audio Conferencing System (pictured above), with a new integrated microphone and speaker bar for huddle rooms, that was introduced at InfoComm 2017. The Canadian company combines 8,192 virtual microphones throughout a meeting room to pick up sound from any location, enabled by real-time hardware, and sophisticated algorithms to simultaneously process sound from all virtual microphones to provide remote participants with a high-quality listening experience. This, combined with a custom audio processing unit, able to support continuous self-calibration, simultaneous echo cancellation, position-based automatic gain control, sound masking, and much more, creates an optimized experience for small to mid-sized meeting and collaboration spaces.

An "Amazon Echo" on steroids? Well, not exactly, but looking at the new Yamaha/Revolabs unified communications (UC) portfolio, including the amazing CS-700 Video Sound Collaboration System for Huddle Rooms, it is clear how these technologies will benefit from all the innovation that's taking place in the voice-controlled speaker craze. Also, we couldn't help thinking how this will also inspire a whole new generation of users to interact with those new-generation smart home devices that are currently being introduced, in ways that are currently restricted to the typical "corporate" UC service and software providers, including Microsoft (Skype), Google, Cisco, Zoom, and others. Not to mention the tremendous impact this convergence will have on new generations of home speakers - as Apple clearly already anticipated with its HomePod.

Even for the design side of things, when we look at the new generation of network-connected microphones from Audio-Technica, beyerdynamic, Shure, and Sennheiser, as well as the all-new wireless conferencing solutions (e.g., Sennheiser's TeamConnect Wireless), we cannot help noticing how similar those devices are to the "hockey puck" Amazon Echo Dot, only if optimized for corporate communications. I am certain that many engineers and executives involved in those Amazon Alexa consumer-oriented projects have also visited InfoComm 2017 and noticed the potential to diversify their market scope...

More specifically on the loudspeaker front, obviously targeting professional sound reinforcement applications, InfoComm 2017 surprised with many interesting new products - in great part benefiting from new Class-D amplification, sophisticated DSP, and network connectivity. But even with the more foundational electro-acoustic design, there were nice surprises, such as the new Bose Professional Panaray MSA12X Modular Steerable Array Loudspeakers and the even more surprising Bose Professional EdgeMax In-Ceiling Premium Loudspeakers with PhaseGuide Technology. Its design was able to combine the superior coverage patterns typical of larger surface-mount loudspeakers on in-ceiling configurations, making it one of the most impressive products at InfoComm 2017.

As I have highlighted in previous InfoComm and ISE reports, the networked audio approach is clearly making a difference. Following the excitement of the introduction of the AES 67 interoperability standard, and with existing leading protocols maturing - see Audinate's announcement of its new enterprise-wide IT-Grade platform to simplify audio-over-IP Network Management: Dante Domain Manager  - the AV industry is embracing networked interfaces faster than any other. It still needs to sort out the challenge of integrated video and audio protocols over IP (the closed and proprietary approaches - albeit effective - are still around), but from the audio systems' perspective, it seems clear that the IP-speaker is very close to becoming a reality. For the moment, it is still mainly about IT/IP managed systems, with the last mile to the speaker still on standard analog or digital formats, but there is a clear perception of the benefits to reach bi-directionality to the single speaker on those commercial installations.

As the Media Networking Alliance (MNA) highlighted at InfoComm 2017, the AES67 interoperable audio transport, connectivity, discovery, and connection management between Dante, Livewire, and Q-LAN protocols is the "glue" that puts those systems together in an economical way that's appropriate to reach the extreme ends of the audio network - from microphones to speakers. This year, the MNA promoted an extensive live demonstration of AES67 interoperability, integrating multiple, different networked audio systems, emulating a practical, real-world AoIP networking application. The demo comprised three racks of networked audio devices, running Dante, Livewire, and Q-LAN respectively, effectively operating as a single AES67 network for a typical performance venue, or theater, networking scenario. Among the many MNA/AES67 demonstrations, involving a total of 16 member companies, Coveloz Technologies was promoting its latest embedded media networking technology solutions for audio, video and control, involving AES67/Ravenna, AVB/AVDECC, ST2110/NMOS, and SAP.

With the complementary Open Control Architecture (OCA) Alliance demonstrations at InfoComm 2017 (it had a booth adjacent to MNA), there was also an important showcase of new AES70 tools and resources, including the promotion of a new technical website developer resource and OCA v1.4 enhancements. Demonstrations on the OCA Alliance booth showcased AES70 hardware and software references, available on a license-free and cost-free basis. The alliance also announced a number of initiatives to further drive AES70 development, including features introduced in the new OCA 1.4 specification, which will be used by the AES to update the current AES70-2015 (OCA 1.3) standard. Those introduce a streamlined system for connection management, OCA CM3, and define new options for transport of OCP.1, the AES70 control protocol, over USB and WebSocket connections, instead of the usual TCP.

One last note to commend the amazing work of the reenergized Association of Loudspeaker Manufacturing and Acoustics (ALMA) International , which attended InfoComm 2017 and enlisted new members, promoting its forthcoming ALMA International Symposium & Expo (AISE) 2018, taking place at a NEW venue, the South Point Hotel and Casino in Las Vegas, NV. According to the new Board of Directors and new Executive Committee, now lead by Dan Foley (Audio Precision), as ALMA's new president, this larger location will better facilitate future growth of the  association and of AISE. AISE 2018 will certainly be a must-attend for the electroacoustic and audio industry.

For 2018, InfoComm organizers have announced a new Integrated Life content program and exhibition, spotlighting smart lighting, sensor technology, building and home automation, voice control, integrated security, mobile AV solutions, smart car technologies, and much more. "We plan to take everything that is cool, but maybe abstract, about new technology - the Internet of Things, sensors, artificial intelligence, the cloud and more - and present it in terms of real-world AV solutions that result in outcomes for customers," says InfoComm International. InfoComm 2018 returns to the Las Vegas Convention Center, June 2-8, 2018.
infocomm.org