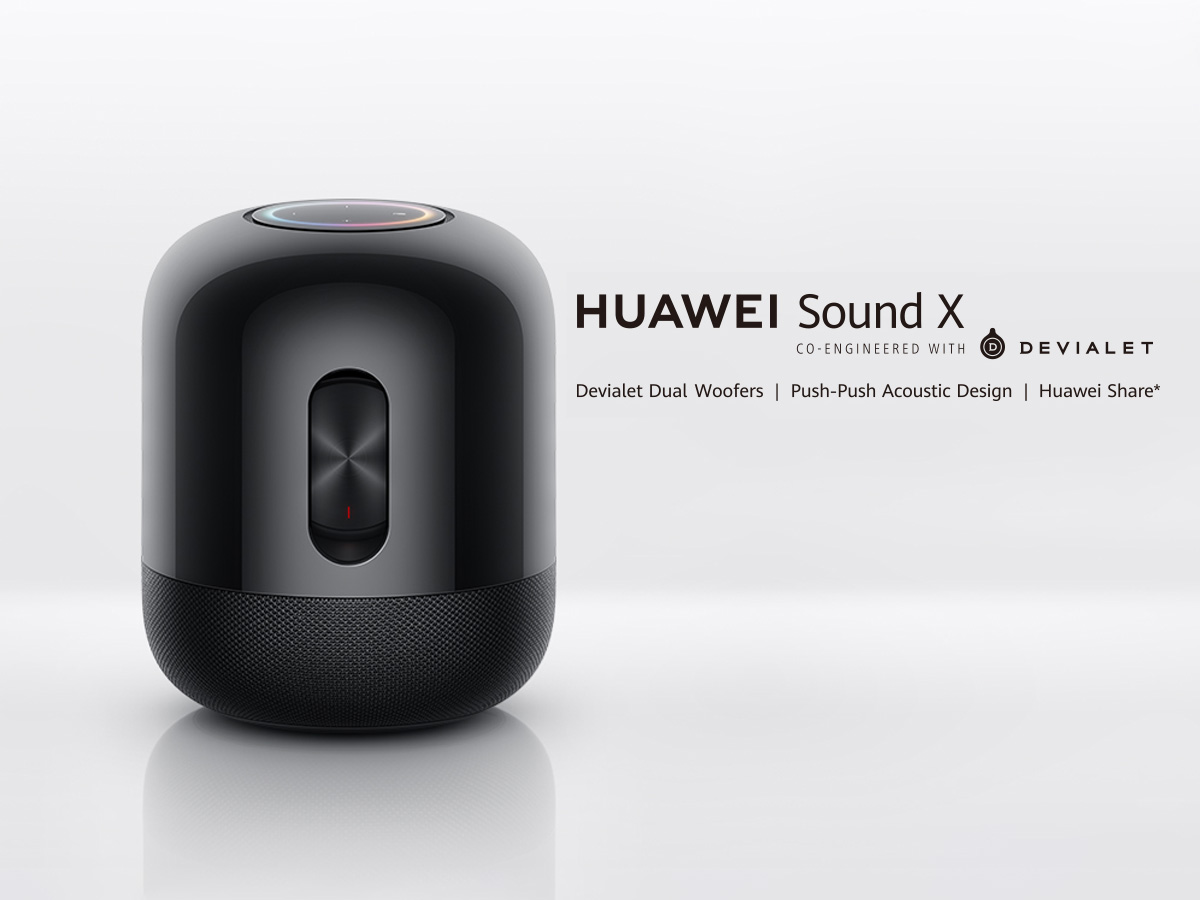 All extremely "familiar" as one would expect from Huawei, the new Huawei Sound X wireless speaker will probably reach many of the UN recognized 195 countries in the world much sooner than the HomePod will be available in all the remaining 187. A visit to the Huawei website confirms the clear intentions, since the whole website design is a blatant copy of Apple's own website - as it would be done by a web design student team.

The press release (at least there's one, even if the English version was clearly translated from the French text from Devialet - In case you're wondering where the "Delightfully Disruptive" comes from...) announces "the first top-notch wireless speaker product (...) marries first-rate aesthetics with exquisite craftsmanship, and has been recognized by the 2020 German iF Design Award committee for its stunning appearance." Apparently, the German iF Design Awards are extremely popular and important, since there are so many.

And of course there are a few touches of "innovative technologies," such as the use of NFC for pairing, which Huawei calls its “Huawei Share" function. Otherwise the specifications are as trustworthy as the press release, as confirmed by the hilarious fake blog reviews and the blatantly incompetent articles "we've seen one for five minutes and... here's the review." "As the music played, we noticed... a frequency range of up to 40kHz," says a website that I didn't know was hiring dog freelancers.

In the announcement we learn that "Gently tapping your phone against the Sound X transmits audio to the speaker, providing a new layer of emotional immersion for the music that you love." And that the speaker generates "deeply evocative sound that lingers while you listen," while "The lossless, low-latency audio can be further bolstered by a proprietary EMUI 10.1 multi-device control panel, Huawei's equivalent of Apple's AirPlay, when it is transmitted from the P40." Yes, this is in the official press release, originally written by Devialet. Oh, and in case you don't know and don't care, the P40 is the new smartphone with "the best camera of all" also announced by Huawei with the Sound X.

And if you have invested recently in a stereo pair of Devialet's Gold Phantom Opéra De Paris with gold leaf decorations (4500 Watts | $3,290 USD each), you better throw it away, because "the next paradigm for audio has stayed elusively just outside of listening range. That is, until the release of the Huawei Sound X, the fruit of Huawei and Devialet‘s collaboration, which leverages the strengths of both technological heavyweights." Another pearl from the press release.

Devialet that French company that developed so much clever audio technology in amplification and wireless audio - and which now grants "access by request only," to the press section of its website - did borrow some of the Phantom's know-how to the drivers and amplification built-in into the Huawei Sound X. More specifically, Devialet‘s patented signal-processing SAM (Speaker Active Matching) technology, and iconic Push-Push symmetrical structure - which by the way are used also in Belkin's Soundform Elite speaker with Acoustics by Devialet.

SAM adapts the output signal to match the specific characteristics of the drivers, minimizing sound distortion (translation, makes small speakers sound decent), while the Push-Push structure "places two high-power speakers symmetrically, so that their back wave vibrations cancel each other out," like in the Phantom bass drivers on each side. Devialet's dual subwoofer concept delivers 60W of booming bass to the Sound X, "while remaining compact and portable for every day, all-purpose use." On the base of the speaker there's an array of six full-range drivers to deliver 360-degree sound. Devialet also confirms that two Sound X speakers can be paired in stereo configuration - you just need to make sure the two speakers are far apart, so that they don't interfere on each other, given that - unlike the HomePod - there's no sensors to automatically adjust the speakers response.

Otherwise the chassis of the Sound X "inspired by the golden dome of the Vienna Music Hall and the black, glazed surface hints at the robust sound that seems to emanate from a bottomless well," (LOL) use "an advanced non-conductive vacuum electroplating process," with an RGB tri-color indicator light on the top surface.

As discussed, the Huawei Sound X plays audio via Wi-Fi, because it is "a process that leads to much less data compression, and fewer lag or latency issues than Bluetooth transmission." And over that WiFi layer, Huawei implemented its self-developed technology – EMUI 10.1 Multi-Device Control Panel (which is similar to Apple’s Airplay, the press release explains in a clear, honest way) and "can transmit high-quality audio whether online or local from Sound X speaker to Huawei Smartphone."

The Sound X is planned to launch in Summer 2020, when the white version should also be available. Price to be confirmed, but extremely cheap - unlike the HomePod.
https://www.devialet.com/en-pt/huawei-devialet-sound-x/
https://www.Huawei.com
related items