It is amazing how so many "grown-up" people in the audio industry - including many consumer audio, and almost all high-end audio and hi-fi companies - completely ignore what a press release is about, what it is used for, or simply disregard the fact that when they actually "release" a new product, they need to tell the press, which will help tell the world about it. And no... handing out a leaflet with a bunch of specification bullet points IS NOT a press release.

In contrast, most pro audio companies never forget to send out press releases, sometimes three or four, until they have sold out their first production run (and we will discuss the importance of that strategy for the distribution channel in another text). Companies attending shows such as InfoComm send out press releases about their ugly black boxes with very little to say, and still they actually manage to write 500 words about their new product and include two press photos with it. And most of those companies actually hire a public relations (PR) agency to do it and they get their investment worth multiple times, because they know they are targeting a very specific professional audience. And that's why they work and cherish their segment trade press. Because they know that's the most effective way to spread their message in the most cost-effective way.

Now, how come companies selling $20,000 speakers or amplifiers or whatever, which actually release a new product every two years, think there's no point in writing a simple press release? Something that clearly states when the product was unveiled/released, explaining what their product is and why they did it, and most importantly, why anyone should buy it. In highly specialized markets, where there are 10 influential magazines and another 10 relevant websites needed to reach out to 98% of all the potential early-adopters and influencers and key channel partners, why not spend a few hours actually explaining what their product is, what it does, how they did it, and why their product is different and better?

Yes, all that is a press release, something that provides the basic facts for a magazine and website to talk about it. It's a manufacturers responsibility to present the basic facts about a product up front. And no, there simply aren't enough resources in an audio magazine to run "investigative journalism" about every single company and product being introduced daily in order to "inform" its readers. That's why most of the hi-fi websites are very rich on subjective impressions and opinions and very poor on information and actual facts, and why many companies have trouble differentiating their innovations. The press release is precisely what provides the starting point for good journalists to do their jobs. 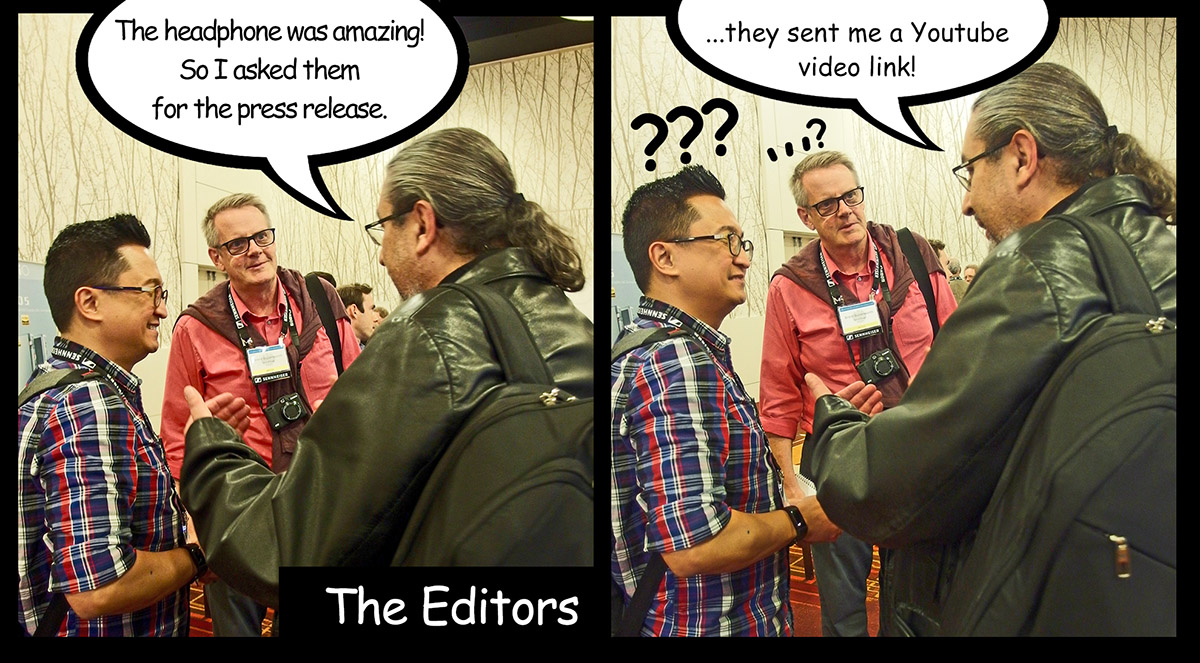 Think about this. When your company attends a show and you are explaining your new product to a potential buyer, in most cases you are able to quickly say exactly everything that should have been distributed in your press release prior or at least during the show. If you do the press release, you get more people reaching out for you to have demonstrations. Your potential clients have already received the basic message. They know first hand what they want to know, they want to know more, and sometimes they already know they want it!

And yes, that is also what press conferences are about. If you are unveiling a new product, you should invite the press early on, hand out the press releases and photos (i.e., a press kit), quickly say out loud the main highlights from the press releases, and maybe give a quick demo. Only after all those steps are followed, should there be a Q&A session, otherwise, no one asks any questions. And no, it's not because the press is anxiously waiting for a free beer. It's because, if you didn't hand out information, and didn't explain what the call was about, no one has questions (we do, but it would be embarrassing to ask: who are you, what is this company, what do you do, why we are here?).

If you are a manufacturer, it is your responsibility to put out all the useful information about your product. Write down the facts. Not only those specs provided by engineering for the leaflet, but highlighting the specs that stand out and why, giving the actual technical description of the product, the circuit topology, heritage, and improvements. In the case of speakers, describe the electro-acoustic design, detail the drivers, crossover points, how everything was combined... Tell the story of your product, what was the inspiration for the project, the usage profile you are targeting, and make sure your main selling points stand out. No journalist needs to guess the basic facts if you actually have them and you should make them available. That way, they know they have the basic story to write when they go back, and they can actually relax and listen to the system, instead of painfully extracting information with a barrage of questions.

But even outside of shows, if you have a product ready, make sure you prepare a proper press release as the first thing to do, much in the same way as it is mandatory to write a manual, print a brochure, and include the reference in your price lists. In this day and age of online media, companies can easily get thousands of dollars' worth of free exposure, just by communicating efficiently with the editors and content managers of those websites.

If you send a nice, well-written press release, with two or three photos (or just give access to a dropbox folder), you get the message out first. Target for 500 words. Less than that and you didn't do much work.... And no, don't share the press release in full on your social media page before handing it out to the media. It's not a question of "exclusives." It simply doesn't hold the same value when a company says, "we launched a new box," to a media outlet saying, "You Need to Find Out About This Box!"
It can be so simple...

P.S.: If a media outlet asks you for a payment to post a simple press release, don't even bother. The readers already have felt the stink and moved on.

This text was originally published in The Audio Voice weekly newsletter. To receive it, register here.
related items