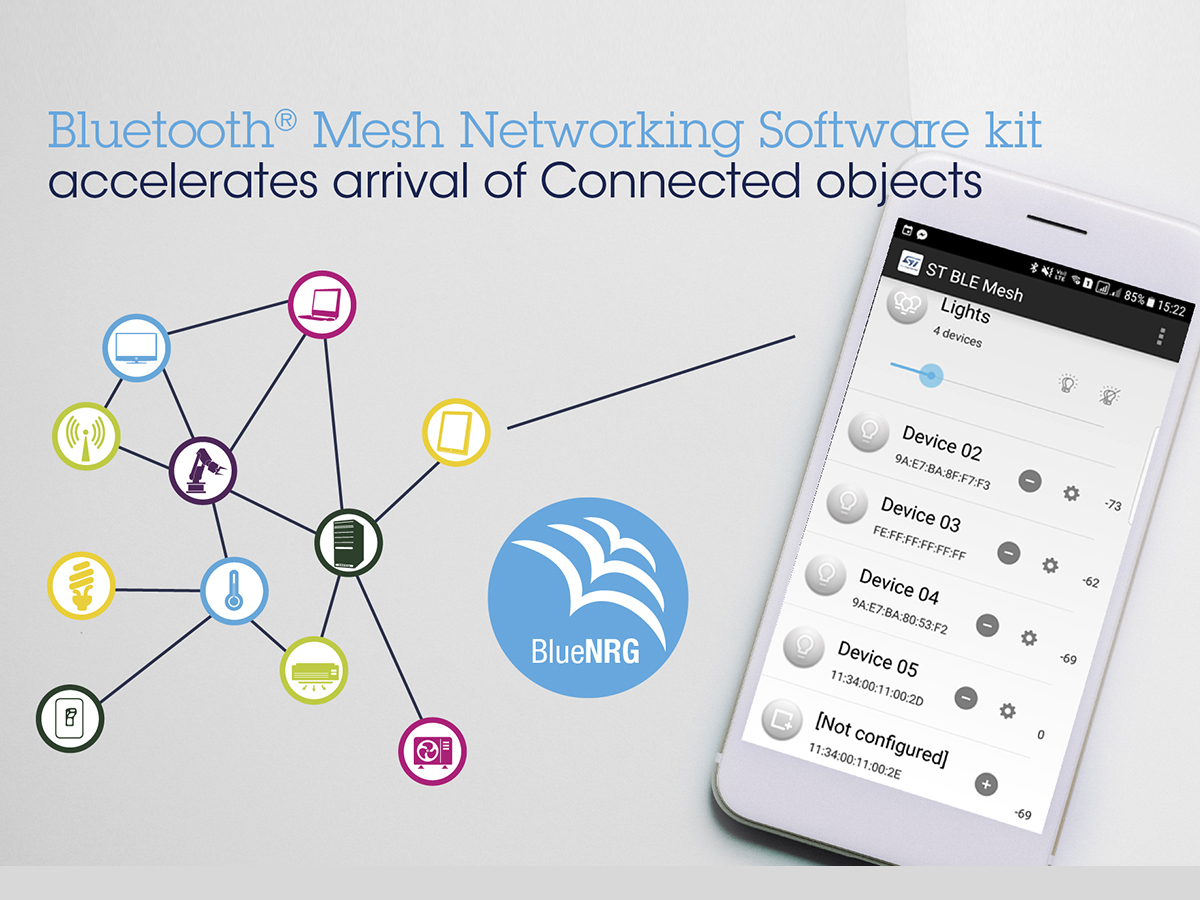 The official Bluetooth body, the Special Interest Group (SIG), made a giant leap with the recently released Bluetooth 5 specification that standardizes mesh networking: connecting large numbers of devices capable of communicating among themselves as well as directly with mobile phones. All smartphones currently on the market can connect to objects in Bluetooth Mesh networks without needing a central gateway or router, allowing easier control of smart lighting, general building automation, and other Internet-of-Things (IoT) applications such as environmental sensing, industrial monitoring, and asset tracking.

Mesh networking in Bluetooth 5 presents an industry standard that enables OEMs to create interoperable products that provide flexibility and freedom of choice for users. ST's new BlueNRG-MESH Software Development Kit (SDK) enables creation of networked devices and the smartphone apps needed to control them. So far, it is the market's only three-part SDK that provides two app-developer packages for Android and iOS, and the embedded-development software for building smart objects such as light fittings and sensors. Together, these three packages provide all the software building blocks engineers need to get their applications running using ST's BlueNRG mesh-ready Bluetooth Low Energy ICs.

"Bluetooth 5 will become a powerful force in the IoT market, and we have invested heavily to deliver solutions that support its important new features, like mesh networking," says Benedetto Vigna, President, Analog, MEMS and Sensors Group, STMicroelectronics. "Adding BlueNRG-MESH to the ST BlueNRG portfolio ushers in an era of connected smart things all around us, like smart-home appliances or lighting switches, and enables secure and convenient control from the feature-rich and stylish user interface of a smart mobile application." 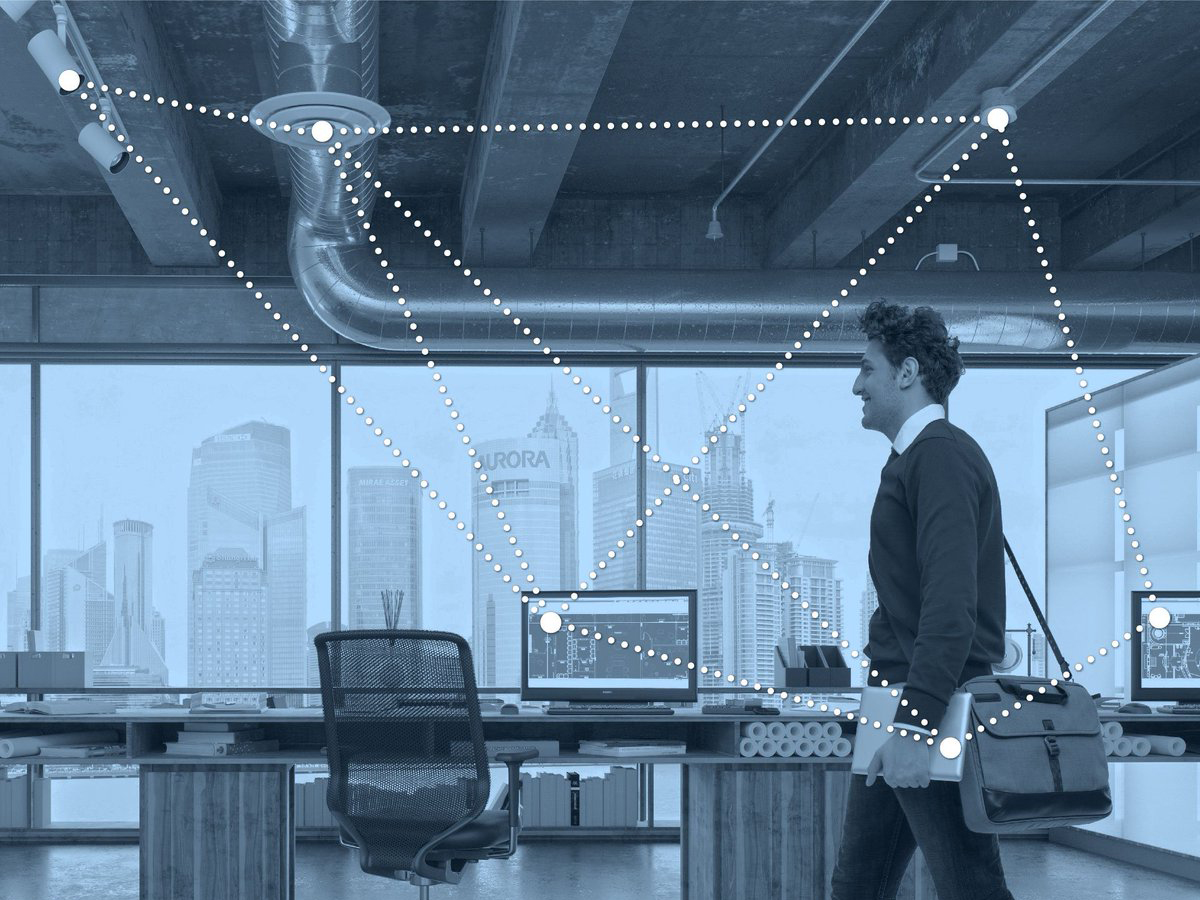 Bluetooth Mesh and Bluetooth Low Energy (BLE), featured in the latest specifications from the SIG, transform Bluetooth into a powerful connectivity technology, bringing advantages such as advanced 128-bit AES wireless security and easy network access using a smartphone. Bluetooth Mesh is one part of the all-encompassing Bluetooth 5 specification, and is optimized for exchanging small data packets like lamp-dimming or on/off instructions, sensor information, or device IDs. The maximum network capacity is more than 32,000 nodes, and can be as wide as 126 hops thereby allowing messages to be propagated throughout the network. In this way, one smartphone can interact with all devices in the network, even when they are distributed throughout a large area such as an office building or factory. An embedded controller, such as a centralized touch panel, can also be included in the network. 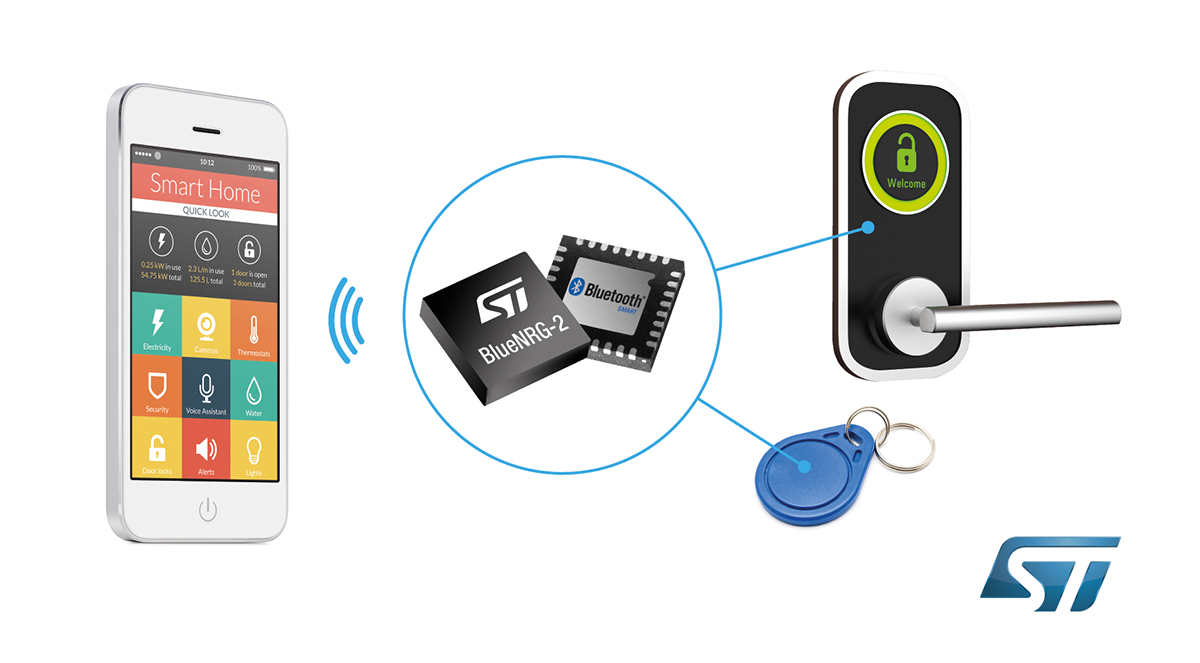 BlueNRG-1 and BlueNRG-2 integrate the Bluetooth radio with an ARM Cortex-M0 microcontroller, providing a single-chip solution for smart objects. BlueNRG-2 can operate up to 105°C, making it ideal for use in lighting products. The BlueNRG-MS radio works with a separate host controller, giving developers the flexibility to add ST's BLE radio solution to an existing product and leverage the SDK to implement Bluetooth Mesh.

The Android and iOS packages provide the core stack and sample applications to help develop smartphone apps for end users to configure and control devices in the network. In a smart-lighting installation, this can include installing or removing lights, adding new lights to the network, grouping lights, pre-programming scenarios, and controlling the lights using gestures such as tap or shake.