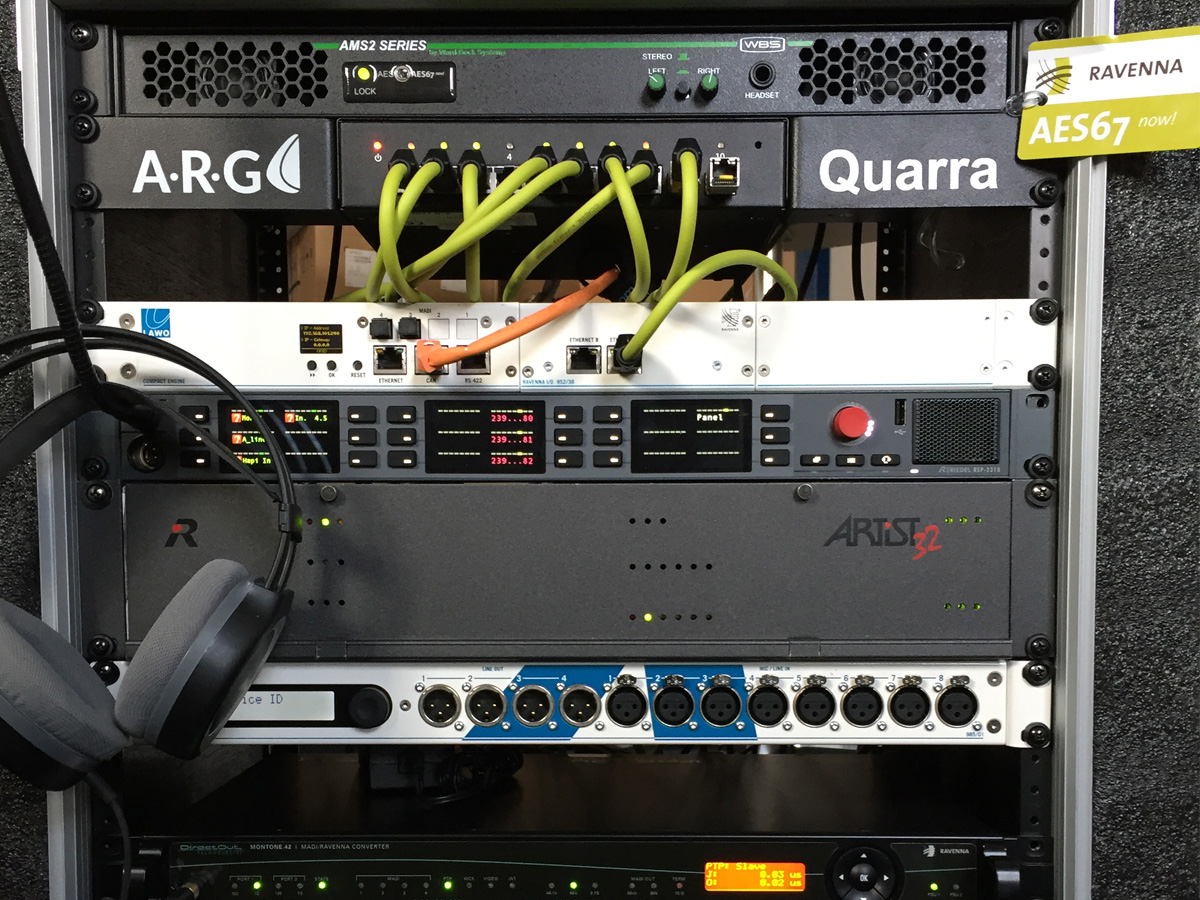 The RAVENNA demo rack features products from Lawo, Ward-Beck, ARG, Cordial, Riedel, Merging, DirectOut, Digigram and Cymatic Audio and is topped by a pair of Genelec 8430IP speakers for playout. It will be used as part of a larger setup to demonstrate AES67 interoperability between products using other network technologies including LiveWire, QLAN and Dante during the ISE AES67 Interoperability Lab session on Thursday 9th Feb in room D403. 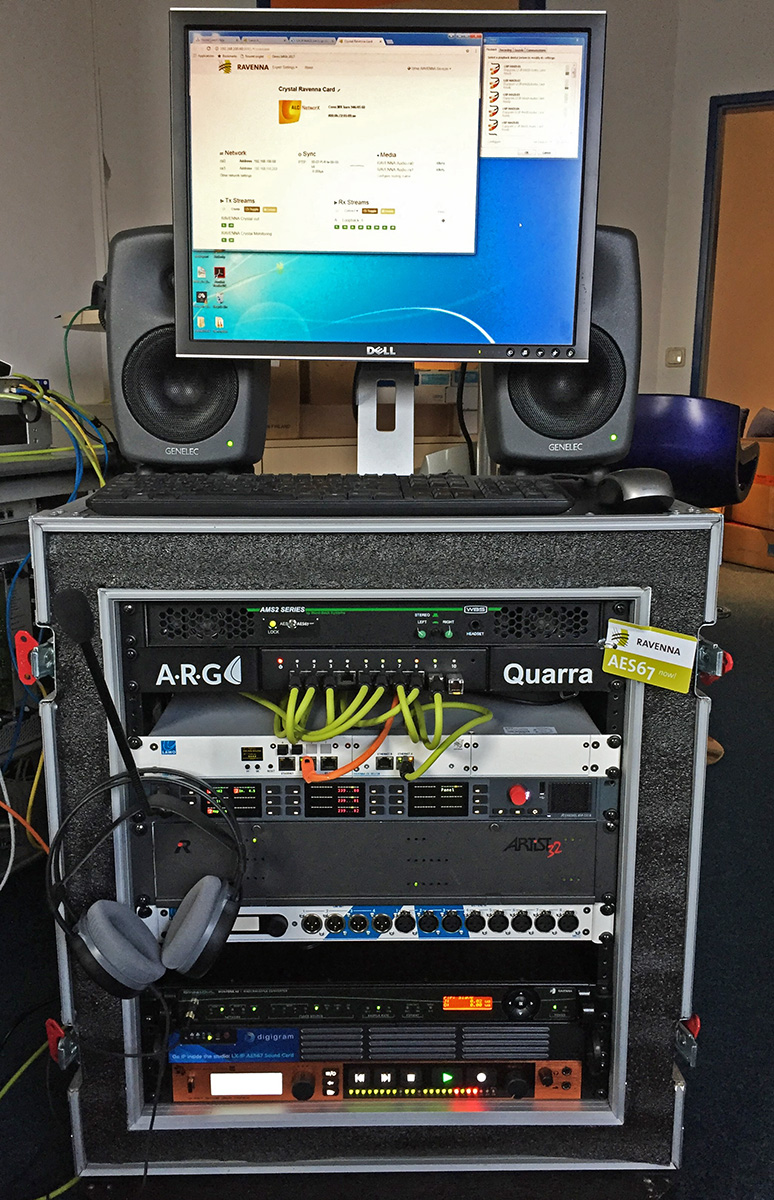 At the heart of the system is a Lawo crystal radio broadcast mixing console whose system core is in the RAVENNA rack. The crystal acts as a junction point to receive streams from the other network technology racks which will then be played out via the Genelec speakers. The RAVENNA rack includes a PC loaded with a Digigram LX-IP AoIP multichannel sound card and the RAVENNA Virtual Sound Card running a web browser for configuration and monitoring of all RAVENNA devices. The PC is also running the recently released and freely available RAV2SAP converter which enables the exchange of SDP data between devices utilizing different network technologies, in particular RAVENNA and Dante.

Another important development for the RAVENNA community is the jointly developed RAVENNA/AES67 Audio Network Manager from Digigram and Merging which provides scalability, security and control of large networks. Currently in beta format, interested parties are invited to the Merging stand to see a demo and offer feedback.

“In today’s increasingly connected environment, interoperability remains a big issue for anyone who relies on or is involved in building audio networks,” observed ALC NetworX’s RAVENNA evangelist, Andreas Hildebrand. “It’s in everyone’s interest that different devices can talk to each other, and we are working hard to achieve that across common and open networking standards like AES67. We’re pleased to say that it is improving all the time as new tools such as the RAVE2SAP converter and the RAVENNA Audio Network Manager continue to come to market to make our lives easier, and as manufacturers continue to take the necessary steps to make their products as accessible as possible.”

RAVENNA is a technology for real-time distribution of audio and other media content in IP-based network environments. Utilizing standardized network protocols and technologies, RAVENNA can operate on existing network infrastructures. RAVENNA is designed to meet the strict requirements of the pro audio market featuring low latency, full signal transparency and high reliability. While primarily targeting the professional broadcast market, RAVENNA is also suitable for deployment in other pro audio market segments like live sound, install market and recording applications.

Unlike most other existing networking solutions, RAVENNA is an open technology standard without a proprietary licensing policy. RAVENNA is fully compatible with the AES67-2015 standard on High-performance Streaming Audio-over-IP Interoperability. Liaisons with standards organizations and industry alliances (e.g. AES, AIMS, AMWA, MNA, SMPTE and others) ensure the close alignment of RAVENNA technology with current industry trends.

AVT joins RAVENNA Community
Among the most recent partners to join the RAVENNA/AES67 community is German company AVT Audio Video Technologies. AVT are experts in the field of telephone hybrids or talk show systems, which are technologies that convert an incoming phone call into an audio signal that is suitable for a studio environment. Naturally, Voice-over-IP technology is playing an increasingly important part in this crucial domain. Another field of expertise for AVT concerns audio codecs that are needed for high quality audio transmissions over different networks. Once again, the transmission standard is now AoIP rather than ISDN or 2-Mbit/s that were used in the past. It is therefore a logical step for AVT to join the ranks of the RAVENNA community.

AVT Audio Video Technologies was founded in 1996. The company took over the audio products manufactured by Lucent Technologies Nuremberg, formerly PKI (Philips Kommunikations Industrie AG). For more than twenty years, AVT has been delivering high-quality and innovative Telephone Hybrids, Audio Codecs and DAB/DAB+ equipment to broadcasting stations and service providers all over the world.

Wolfgang Peters, AVT’s Sales Director states: “As a manufacturer of high-quality IP-based audio systems, the move to implement RAVENNA into our new products represents another milestone towards open standards. In addition, we want our customers to decide freely which solution they prefer in the market. In the long term, a manufacturer-independent Audio-over-IP implementation means security both for us and our customers.”
www.ravenna-network.com
related items