Don't miss Mike Klasco's overview of the latest trends in Audio Digital Signal Processing, a review of a new "knurled diaphragm," patent for planar magnetic drivers, and a User Report on LOUDSOFT's FINE R+D Analyzer, which, from 2018, will be implemented into the Test Bench measurement protocol. In Test Bench, learn more about a bass-midrange driver, and a woofer, from Eton and Volt, respectively. 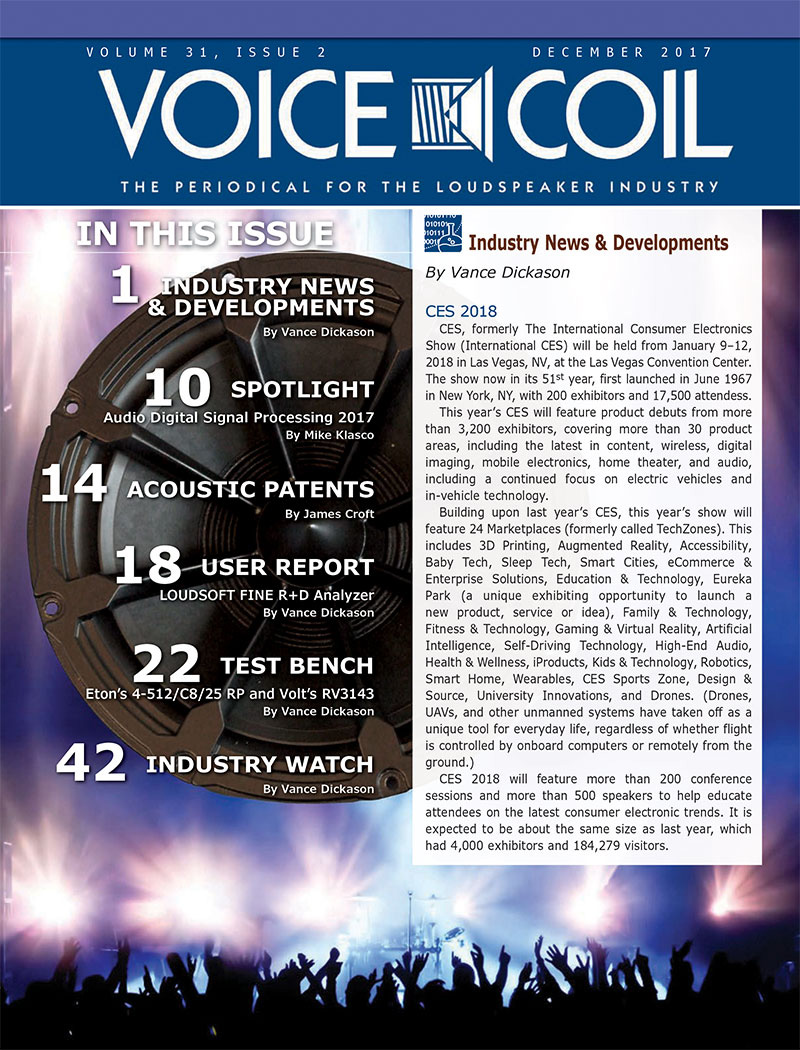 In this edition of Voice Coil, which will be freely distributed at key industry events such as ALMA International Symposium & Expo 2018 (www.almainternational.org), and CES 2018 (www.ces.tech), Vance Dickason addresses what we should be expecting for those events held in Las Vegas, NV, from January 6-7 and January 9-12, respectively. The usual roundup of Industry News and Developments also includes an update on the latest measurement tools from Physical Lab, a company based in Senden, Germany.

Next up, Mike Klasco (Menlo Scientific), addresses the latest trends on Audio Digital Signal Processing. For this Voice Coil Spotlight article, Klasco extended the focus on digital signal processing from the October 2017 issue, now covering what is available in DSP hardware and audio signal processing as well as the some of the key vendors and market trends. The article also highlights some of the innovations in this field, as presented at the CEDIA 2017 Show in San Diego, CA, including new products targeting immersive audio, surround, and voice command applications.

In his Acoustic Patents column, James Croft (Croft Acoustical) reviews an interesting patent of a "Knurled Speaker Diaphragm," awarded to Daniel W. Clark (San Diego, CA), and Frederick Bruce Thigpen (Tallahassee, FL), on behalf of MrSpeakers, LLC (San Diego, CA). The patent details a speaker that "may be configured with at least one diaphragm positioned proximal to and separated from an array of magnets. The diaphragm may consist of a substrate and at least one patterned electrically conductive trace with a portion of the diaphragm knurled to provide a ridge extending a height above the diaphragm that is at least twice a thickness of the diaphragm." Even though MrSpeakers is mainly active in the headphone segment - and that might be the intended target for this innovation - its importance is of note for the industry. As Croft notes, the patent office initially rejected the claims due to prior patents, eventually accepting the inventor's arguments, in 2016. The review provides the historical context for planar magnetic transducers, and explains why this patent "can provide a significant improvement by reducing spurious resonance and distortion and also lowering the fundamental resonant frequency and bass extension as compared to a standard, tensioned, non-corrugated, thin-film diaphragm."

This edition of Voice Coil also features a User Report by Vance Dickason of Loudsoft's FINE R+D Analyzer, a Fast Fourier Transform (FFT) analyzer packaged in a 1U chassis. As Dickason notes, beginning with the January 2018 issue of Voice Coil magazine, this apparatus will be implemented into the Test Bench measurement protocol, and the presentation provides the necessary background before its introduction.

For this month's Test Bench, Dickason characterizes the Eton 4-512/C8/25 RP 4” bass-midrange driver, and from Volt, the 12” RV3143 Studio Monitor woofer. The first driver is from the German brand's home audio Orchestra line of drivers. All of the cones in this line are serrated paper cones with the goal of breaking up modes. The second driver, from UK OEM manufacturer Volt, is probably the most uniquely designed woofer to be featured in Test Bench for a while - as Dickason notes. The RV3143 12” woofer has no frame on the back side of the driver, using Volt’s patented Radial Technology - the brain child of the company’s founder, David Lyth. Instead, this woofer uses a front-mounted eight-spoke proprietary cast-aluminum frame that is mechanically coupled to both the back plate and to the top of the pole structure/phase plug, allowing not only for greater mechanical coupling to the major heat conducting elements of the motor structure, but also for the heat produced by the motor to be radiated to the air outside the enclosure rather than heating the air within the enclosure. 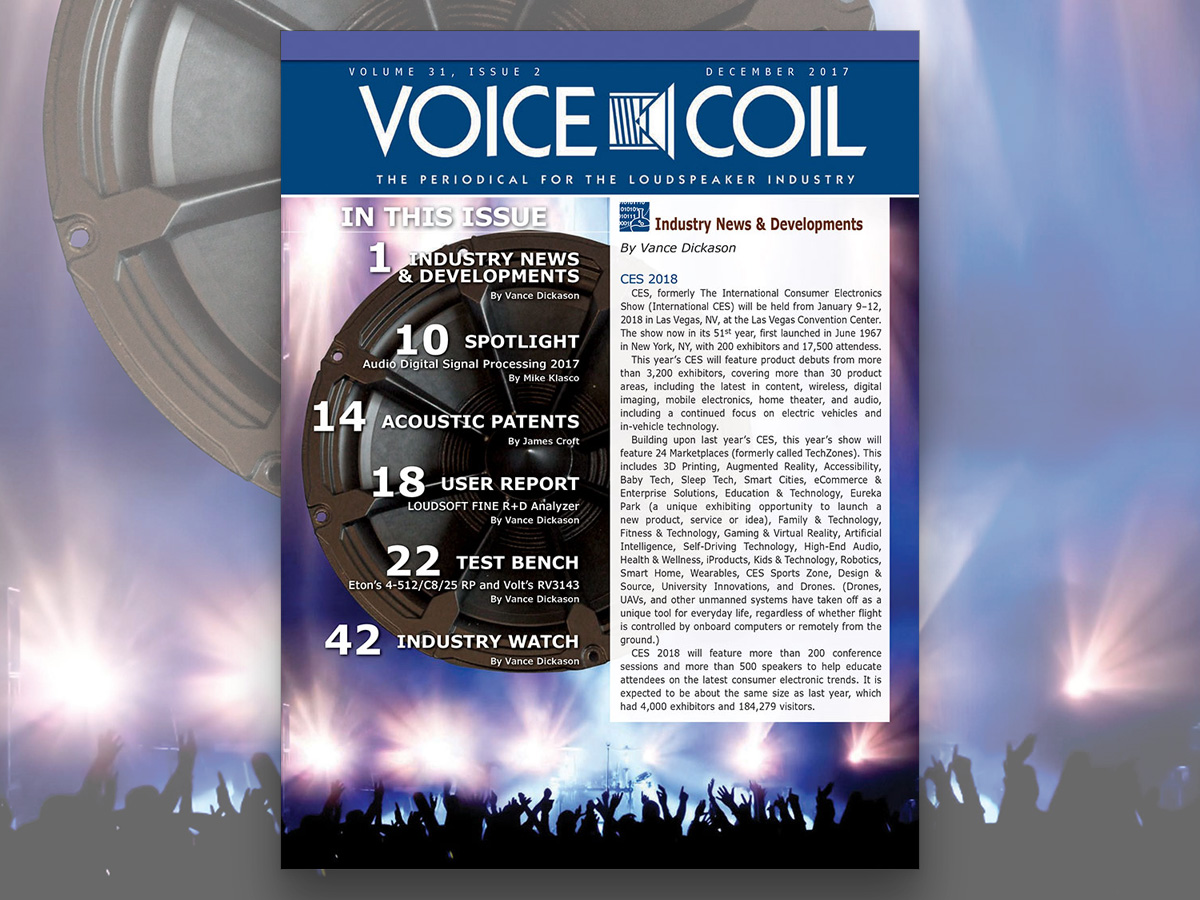 Remember, Voice Coil is free for industry professionals. To qualify for a free subscription to Voice Coil, or renew your subscription, go to: audioxpress.com/page/Voice-Coil-Subscriber-Services.html
related items

Here for You: Voice Coil May 2020 is Now Available

audioXpress Opens Up During Lockdown! Free Access to Digital Editions