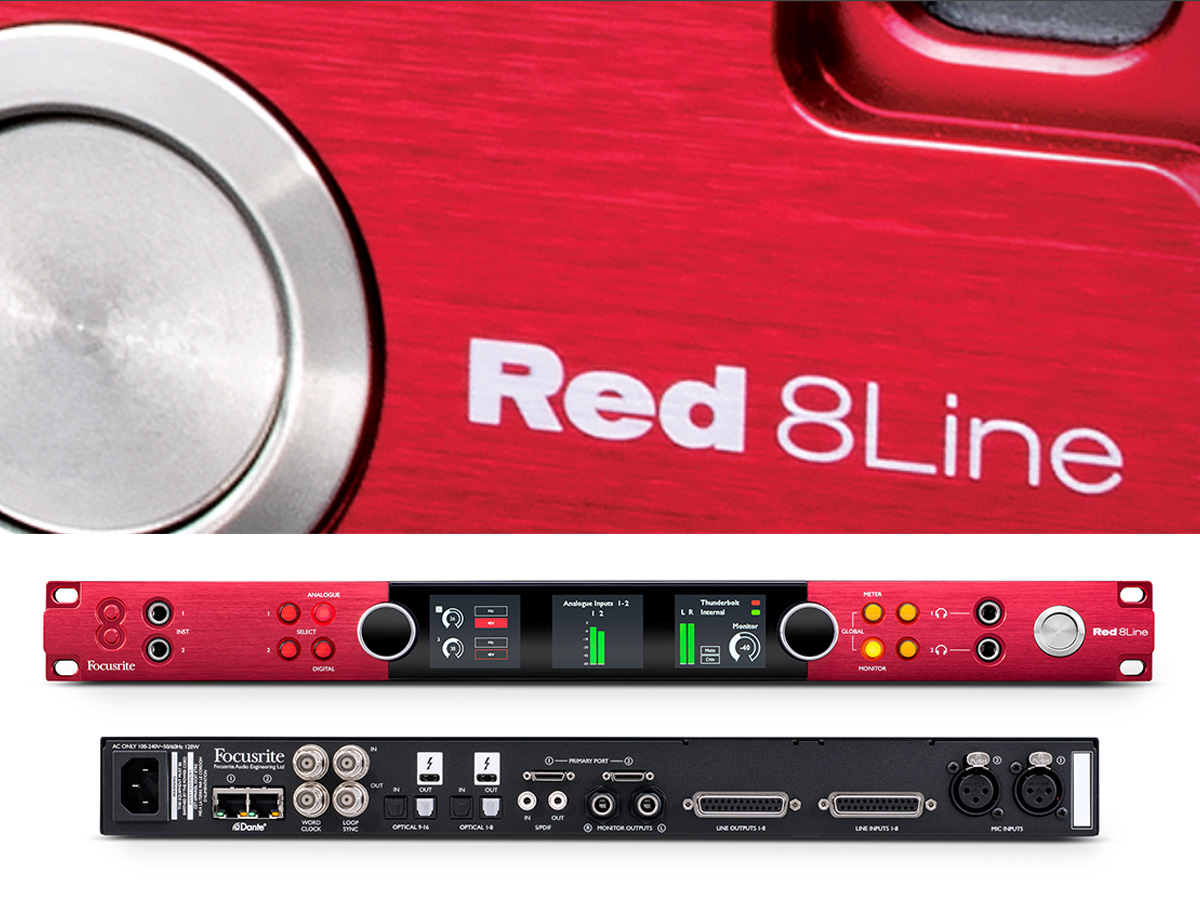 On its professional division, British company Focusrite recently teased the industry with four upcoming products, of which the Red 8Line was clearly the highlight - as a new addition to the brand's Red range of Pro Tools HD, Thunderbolt 3 and Dante audio interfaces for Mac and PC. This new model is currently the most versatile and future-proof choice for professionals who work in Pro Tools HD and other DAWs — on both Mac and PC, thanks to the Windows 10 drivers for Thunderbolt 3-equipped PC users.

With mini-DigiLink the Red 8Line helps Pro Tools users not to get limited by the options available in Avid's own interfaces. And adding Thunderbolt 3 plus Dante connections, the Red 8Line offers a long-term solution particularly for commercial studios, by offering the best computer interface available at the local lever, combined with all the possibilities of audio networking multiple studios, or even remote studio facilities with AoIP. And the Red 8Line also makes it possible to instantly switch between Pro Tools, other DAW applications, and a vast world of Audio-over-IP solutions. Users can simply change the host mode either in RedNet Control software, or using a button on the Red 8Line front panel, to change DAWs in seconds. 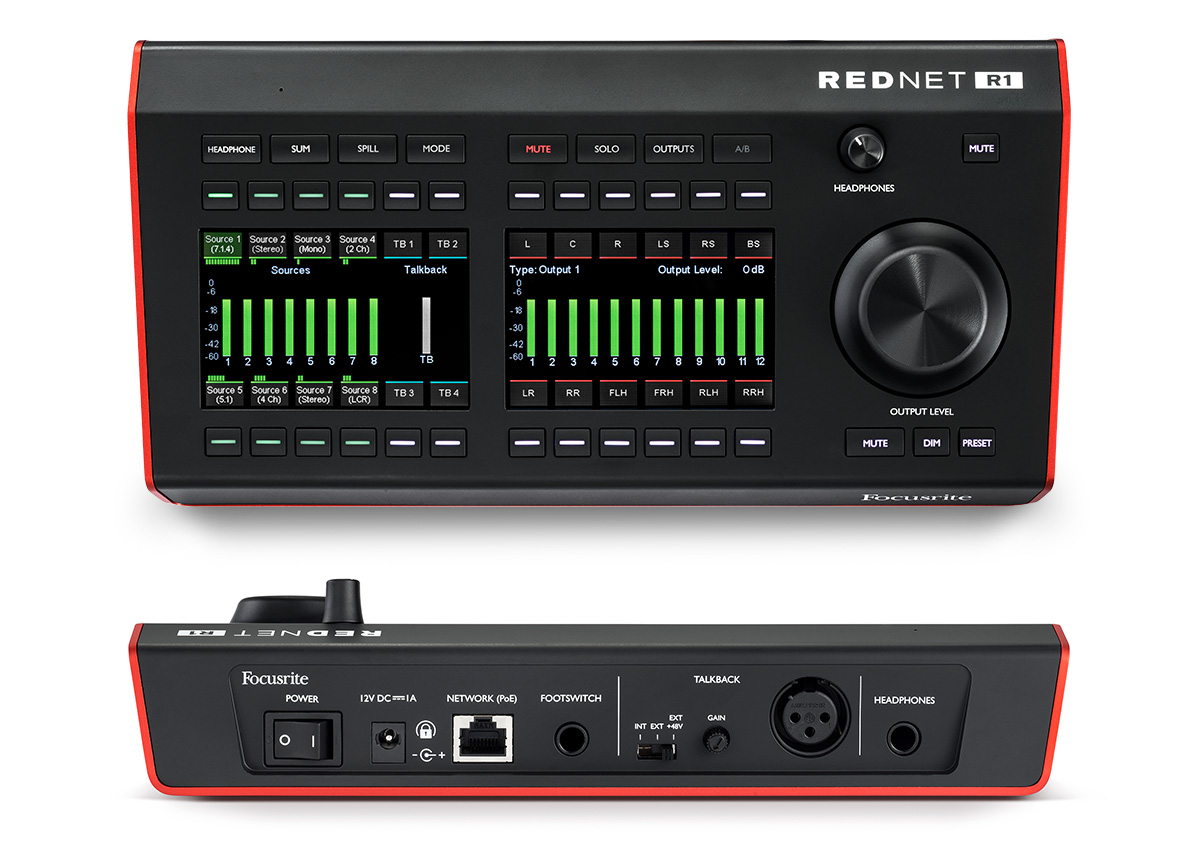 And very interestingly, they can pair the Red 8Line with the new RedNet R1 desktop remote controller (picture above), which Focusrite also announced to be available soon. This new controller enables users to interact with their audio interfaces, control a range of different monitor output setups, ranging from mono through to 7.1.4 surround, including Dolby Atmos and other immersive audio workflows. And RedNet R1 even features a Dante-enabled talkback section, an internal mic and an XLR input for connecting an existing microphone, and a high-powered headphones output.

The Focusrite Red 8Line features the latest implementation of Thunderbolt 3, complemented with the company's own ultra-low-latency Thunderbolt drivers and providing the flexibility to use software plug-ins in real time, for processing or running virtual instruments. With two Thunderbolt 3 ports as standard, it's also possible to daisy-chain Thunderbolt devices, such as third-party plug-in accelerators, hard drives, external 4K displays, processing units and Thunderbolt hubs.

On-board Dual Dante ports enable connection to the industry-standard AoIP protocol, for easy expansion and interoperability with the Focusrite RedNet family of interfaces and with AoIP equipment from hundreds of manufacturers including Neve, Yamaha and DiGiCo. Twin mini-DigiLink ports provide connectivity directly to Pro Tools HD cards, with no need for device expansion. Digital synchronization is facilitated by Loop Sync and Word Clock I/O.

In the front panel, three color LCDs provide highly accurate level metering for any input or output block, as well as for main monitor and headphone outputs in addition to parameter display. And the Focusrite Red 8Line is accompanied by a software bundle that includes the Brainworx bx_console Focusrite SC channel strip from the original Focusrite Studio Console, plus Red 2 and Red 3 EQ and Compression plug-ins which accurately reproduce the sonic qualities of the original Red hardware.

While Thunderbolt has long been available on Macs - and is the reason why so many studios which previously relied on Firewire evolved directly to the low-latency and no-limits multichannel possibilities of Thunderbolt - some Windows PC users were painfully left waiting. Something that is even more strange since Thunderbolt is a standard technology promoted and certified by Intel. Fortunately, with the transition to Thunderbolt 3 and Intel directly supporting the technology natively on its own range of processors, PCs with Windows 10 are finally able to evolve to the latest and fastest interface.

And Focusrite also made available new Windows 10 Thunderbolt drivers to make its Red 8Line compatible with PC-based audio systems equipped with Thunderbolt 3. In fact, with these Windows 10 drivers the complete Focusrite Red range of Thunderbolt, Pro Tools HD and Dante interfaces ((Red 4Pre, Red 8Pre, Red 8Line and Red 16Line), is supported for the first time. Red interfaces are Thunderbolt devices that feature direct connectivity to both Pro Tools HD and Dante audio environments as standard, without the need for option cards or hardware upgrades. All Windows 10 Thunderbolt drivers for Red range are available to download now.
http://pro.focusrite.com
related items