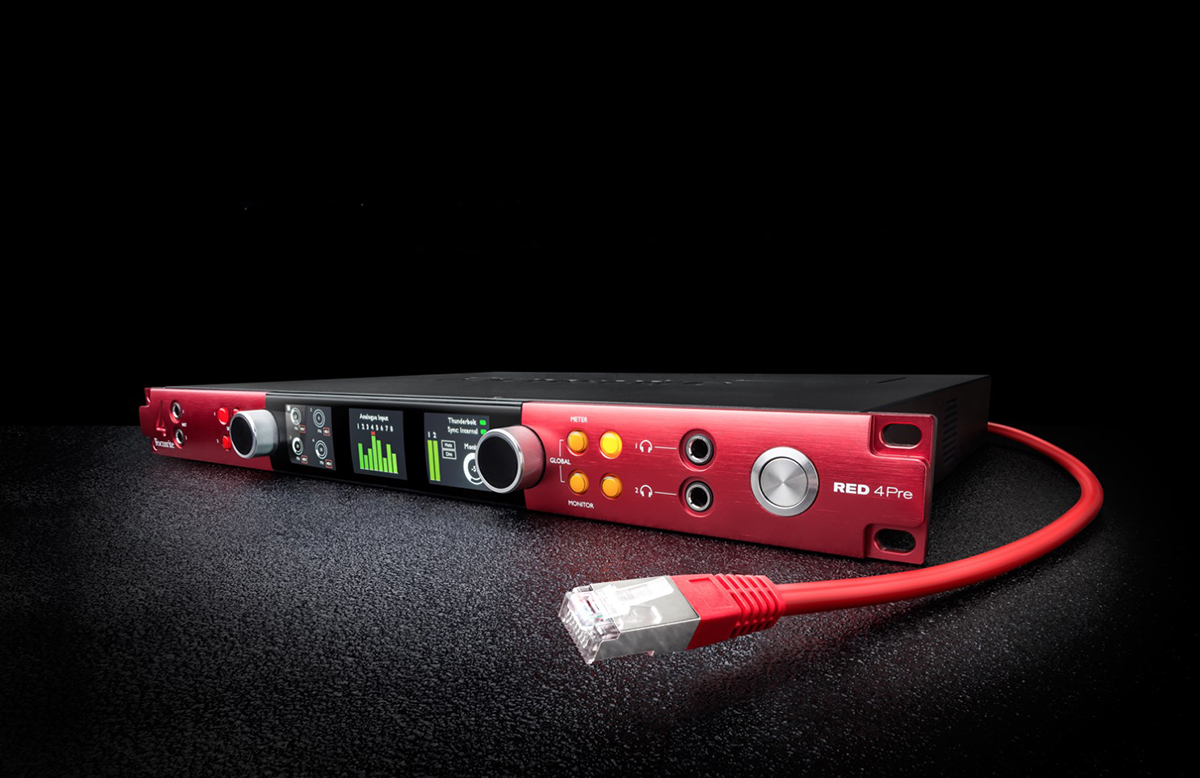 The new Red 4Pre was clearly designed to fit the needs of contemporary recording, in the studio or live situations, combining all types of connectivity options in a single unit, while at the same time translating the heritage of the famous Focusrite Red studio preamps. The Red 4Pre is also capable of being at the center of a complete recording solution featuring other Focusrite solutions, from their classic analogue units all the way to the more recent RedNet modular Dante AoIP solutions.

But most interestingly, the Red 4Pre features dual Ethernet ports for Dante audio-over-IP networking, allowing expanding its recording capability over Ethernet for up to 64 additional channels anywhere on a network, with low latency – and lower cost. This allows for the simplest setup, with a single connection carrying both audio and built-in clocking. Additional RedNet or other Dante-compatible components can be connected to the Ethernet ports of the Red 4Pre to provide additional channels irrespective of the interface used to drive the Red 4Pre.

Whether the Red 4Pre is connected to the computer via Thunderbolt, DigiLink or Dante, it becomes possible to simply connect units such as two RedNet A16R (32 channels of analogue I/O), four RedNet MP8R (32 channels of RedNet mic pre), or other Dante-enabled products via Ethernet as desired. Unlike daisy-chaining via Thunderbolt, Dante allows running additional channels over a greater distance, with low latency and lower cost.

Apart from the most complete connectivity as an audio interface, the Red 4Pre combines four of Focusrite’s digitally-controlled, “Air” enabled, Red Evolution mic preamps, featuring “parallel path summing” conversion, with the sound quality expected from Focusrite. According to the company, the Red Evolution mic pres deliver -129 dB EIN and 63dB of gain, which allows plenty of room to accommodate external processing. The mic pres can be controlled digitally, for adjusting/recalling settings and stereo linking via Focusrite Control software. They also include Focusrite’s unique ‘Air’ effect.

This ‘Air’ function is a purely analogue effect that emulates the sound of the transformer-based mic preamps of the ISA range, the foundations of Focusrite’s “Heritage Sound”. When ‘Air’ is enabled, the microphone impedance is set to 2.1kΩ and the frequency response curve is given a subtle mid-high boost – all in the analogue domain. This way, it recreates the sound-shaping effect of the classic ISA transformer, by using an authentic analogue model of the original transformer-based preamp design.

Another important aspect in the Red 4Pre design was the A/D and D/A conversion, which, according to Focusrite, is the best they ever made. The precision conversion chips are the same for the Red Range but using two conversion chips in parallel and summing the result to enhance the signal-to-noise ratio, giving an increase in signal level of 6dB (as the two signals are in phase) while random noise is only increased by 3dB (as phase cancellation happens on average 50% of the time). The result is a reported net improvement of signal/noise ratio of 3dB.

With careful component selection, design and board layout, Focusrite says the Red 4Pre’s design achieves “the optimal overall sound”, with main inputs and outputs delivering ≤0.0009% THD+Noise and frequency response flat from 20Hz to 35kHz ±0.25 dB or better, with 118dB (A-D) and 121dB (D-A) dynamic range. The Red 4Pre operates at standard sample rates up to 192kHz, 24-bit – ideal for high-resolution audio, which Focusrite points-out allows the lowest latency and offers the best option for archiving music at the highest possible quality levels. Also, the board layout keeps the converter chips and the analogue circuitry physically as far apart as possible and construction uses multi-layer boards with ground planes between layers.