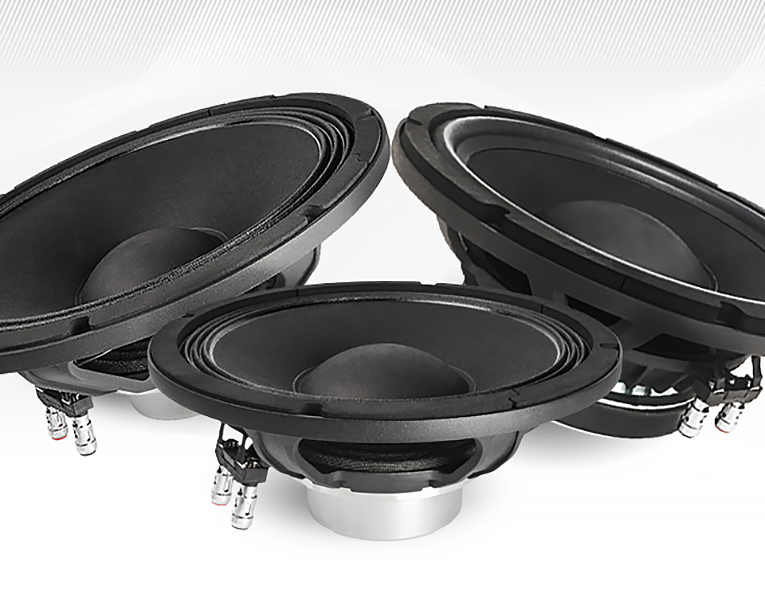 The new FaitalPro 12RS550 is a 12” woofer with ferrite magnet producing a controlled acoustic behavior, soft, but very powerful. It is aimed at customers who create two/three way speakers, for clubs, studio monitors, while being able to respond to multiple other usage scenarios. As Naggi explains, “It deliberately offers controlled efficiency to respond to all situations where average efficiency systems and “accommodative” tonality are needed. It almost borders on the hi-fi market; purposely less harsh if compared to the typical style of pro-audio speakers. It produces, therefore, an attractive sound, all-round, non-aggressive, for a classic low bass “where you put it, it sounds”.”

An indicator for this specific requirement is revealed by the EBP (Efficiency Bandwidth Product) parameter of 108 Hz, which suggests its use in simple constructions, standard type SLR, front loaded loudspeakers. The new woofer requires no special crossover cuts or unusual cabinet sizes. It features a waterproof membrane using mixed cellulose pulp of high quality synthetic fibers and provides a rubber edge.

10PR320 and 12PR320 Woofers
Besides the new 12RS550, FaitalPro also introduced the new 10PR320 and 12PR320 woofers, representing an evolution of existing 10” and 12” PR300 models, now using a totally different basket and based on a more flexible magnetic circuit. Designed for low and medium-low frequencies in two-way speakers, targeting especially the MI market (electric bass, jazz guitar, but not only) and general pro audio applications.

According to Flavio Naggi, the new woofers “are ideal where 10” and 12" woofers are needed to extend the low frequency response beyond the standard products available to date. The type of sound produced can be defined as "nice & clean”.”

Both models provide a 65mm, 2.5” coil with good power handling, rated for real 300 W and 600 W maximum power (AES). The true novelty for both is the engine, with the neodymium magnet attached to the outside of the basket. Obviously, the electroacoustic parameters change and the 10PR320 demonstrates a lower QTS, a slightly higher Fs and a slightly more “nervous and responsive” character, compared to 12PR320, which provides more "balanced" results, relatively quiet, but still sufficiently "assertive".

Both employ waterproofed cellulose pulp and mixed fiber cone with cone surround in waterproof treated fiber with a three-wave profile in order to obtain the desired tone and maximize the movable element excursion. Both woofers show very high sound pressure levels and great resistance to power.

“It should be noted that the neodymium magnetic circuit allows us to limit the weight and development in depth. In this sense, the full speaker will be lighter and less bulky. This translates into a significant advantage in many uses and especially in touring and in fixed installations with rigging,” Flavio Naggi adds.
www.faitalpro.com
related items