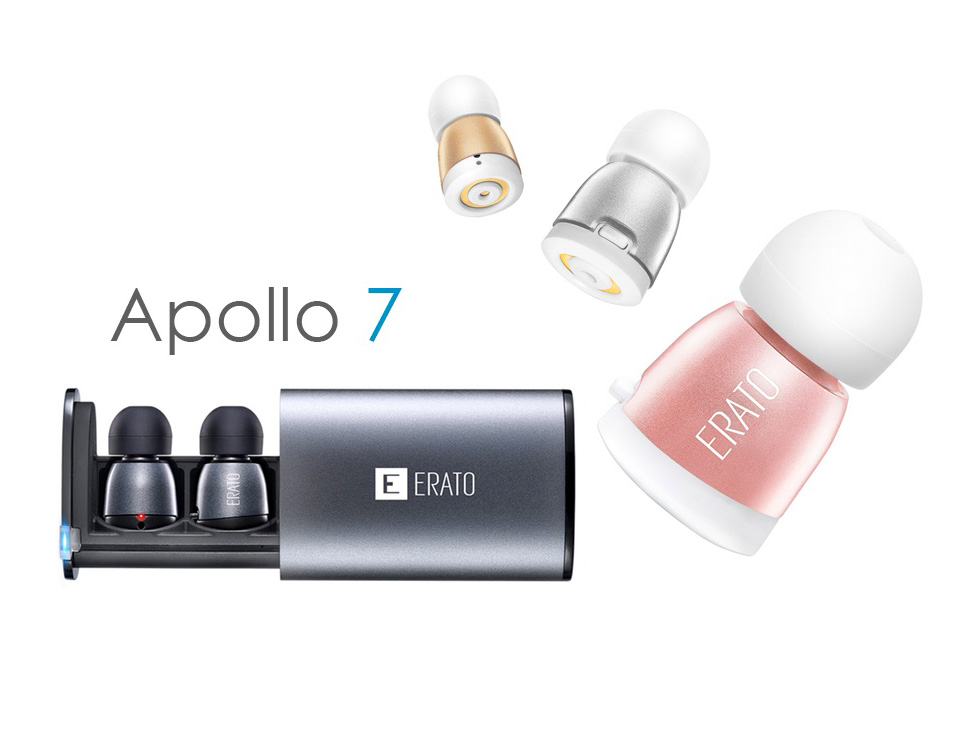 We have seen the concept announced before - with some minor variations - including some long-lasting (and successful) campaigns on Kickstarter. Bragi Dash, Noble Audio, Kanoa, HearNotes, and more recently Onkyo, all promised to “start shipping soon” and all faced the same issues. The more they tried to add features and improve the sound quality - including updating to the latest Bluetooth Low Power modes - the more they faced problems with the internal battery that such active devices need. Inserting a highly sophisticated device with a battery into the user’s ears means designing a full waterproof device that is highly stable also to temperature variations. But the largest hurdle is the battery capacity and how to find a practical way to charge the earbuds. All the mentioned companies introduced smart ideas into their smart devices, but the problem remains - would we buy wireless earbuds that only last for two or three hours, just because we don’t want to have any wires or a necklace connecting the earbuds? If some users complained about the Apple Watch’s battery only lasting a full day, it seems the answer is obvious.

But still, many companies want to be first with the concept and are trying hard to actually have a product in the market. The Apollo 7 from Erato Audio Technology, launching on Kickstarter, is a serious effort from a team of industry veterans. Erato Wireless Audio Technology owns TM (Taiwan Microelectronics), an advanced audio IC design house. TM holds a very competitive place in the RF IC field and was crucial in developing Apollo 7’s wireless audio technology. The team at Erato Wireless Audio Technology has vast experience in developing successful wireless products. Having held executive positions at WYSE, Viewsonic, Vivitek (formerly Luxeon), and ADATA Technology, Michael Chiu, President of Erato Audio Technology USA, has more than 20 years of experience in manufacturing and business management for the consumer electronics industry.

Working together, Michael and Randall Lan founded Erato Wireless Audio Technology in 2015. As cofounder, Randall is focused on RF circuit design research in Silicon Valley and previously founded Monolithic Microwave Integrated Circuit (MMIC) design house in 2003. He specializes in the use of Pseudomorphic High Electron Mobility Transistor (PHEMT) technology in the design of various RF Switches, as well as a plethora of Multi-Chip Module (MCM) applications in wireless communication systems and system-in-package (SiP) design.

Combining Michael and Randall’s wireless signal experience along with the direction of Bob Smith, Erato’s Senior Audio Engineer, which previously worked with headphone and audio amplifier manufacturer NuForce, the team was able to create the Apollo 7, working side by side with Mavin Technology, a leading manufacturer of wireless audio products. 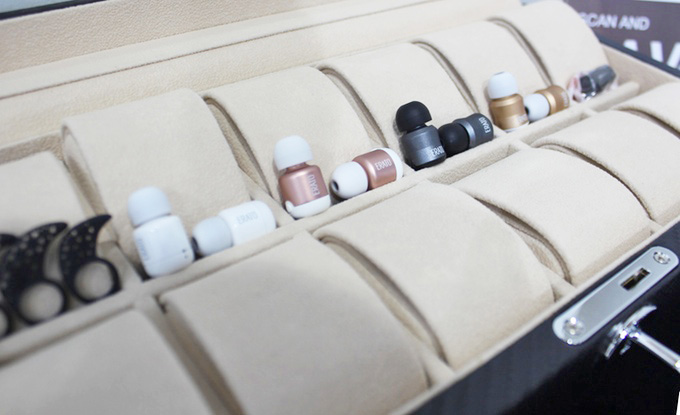 That’s because of this combination of experienced manufacturing, supply chain management, wireless technology and core audio technology, that Erato Audio is confident to successfully ship the Apollo 7. According to their website, the project has taken already 1.5 years and the company invested large sums in its research and development to achieve a proof of concept.

The Apollo 7 was recently shown at the Mobile World Conference (MWC) 2016 show in Barcelona, grabbing some valuable input from industry experts (including our own colleague Mike Klasco - Menlo Scientific), regarding improvements needed in performance and sound, which have meanwhile been implemented. The Apollo 7 units that are reviewed and discussed in some websites are part of the first pilot-production run of 50 pairs, all individually assembled and adjusted to have slightly different tunings.

The company says they are now almost ready to start final production and want to gather further input from potential users, the reason why they decided to launch a campaign on Kickstarter – successfully funded in just a few days. According to their campaign, first batch of orders will ship in mid to late June 2016 after confirming colors. The funds raised will be used to finalize the 2nd batch shipping in July 2016 - they say.

As for the Apollo 7 specifications, enough to say that the earbuds combine a built-in MEMS omnidirectional microphone - which is clearly ambitious, supporting voice recognition, Siri and Google Now support - with Bluetooth 4.1 wireless technology and audio support for aptX, AAC, and SBC codecs. According to testimony by Mike Klasco, the Apollo 7 earbuds don’t seem to suffer from any sync or delay problems that have plagued previous attempts (including pairing Bluetooth speakers in stereo pairs…).

Apollo 7 will be offered in 4 different colors, Silver, Gold, Grey, and Rose gold, apart from a limited Kickstarter Satin Black Edition. With 4 patent-pending features, the Apollo 7 also claims the first patent-pending, 360-Degree charging circuit capable of allowing users to insert the earpieces into their dedicated charging case for “charge on the go” convenience. Elegantly stored in the aluminum housing that doubles as a stylish travel case, the charging unit has the ability to recharge the Apollo 7 earphones twice before needing to be recharged again itself. Earphones automatically shut off when they are inserted in the case and start charging. 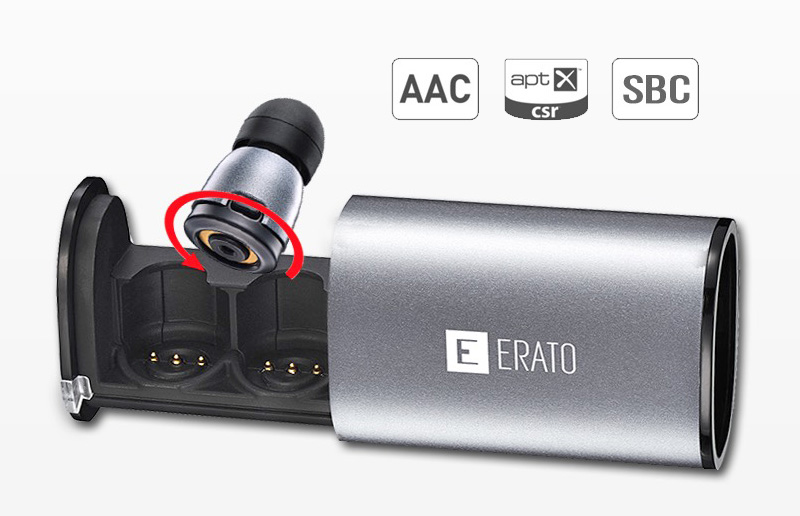 Another interesting claim is the fact that the earbuds can be used as either right or left. Either Apollo 7 earbuds can become the master unit and then paired with the other to deliver stereo sound. Each earphone weighs just 4 grams and a single button allows the user to answer and hang up phone calls, play music, skip tracks, or even change volume, by tapping, holding, or double-tapping on the button.

Finally, the Apollo 7 earbuds are waterproof. Erato uses a special nano-coating technology that enables the earphones to work even after being submerged in water. The accessories kit comes standard with 3 sets of rubber tips, and 3 sets of Comply Foam Tips: Isolation T-600 (Small, Medium, Large). It also comes with 3 sets of sport stabilizers to fit different size ears. 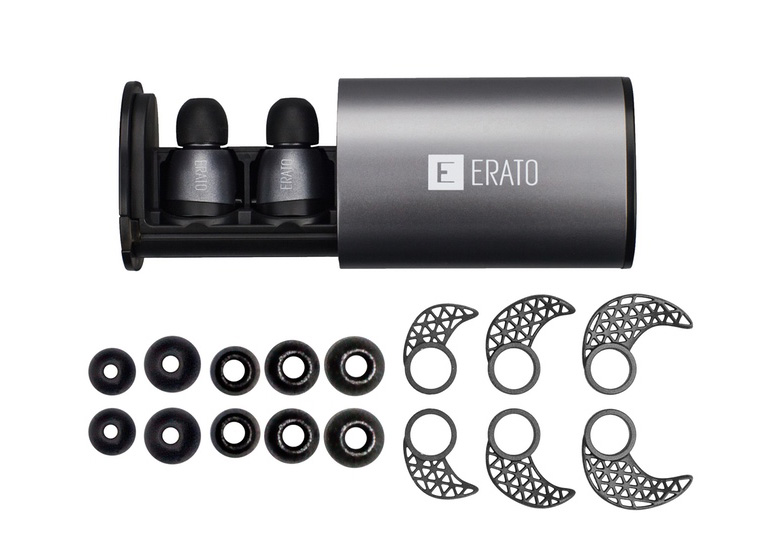 Anyone interested can grab one of the first available units on Kickstarter and support Erato on the effort.
eratolife.com
related items