One of the first Bluetooth 5 qualified SoCs, DA14586 also includes an integrated microphone interface allowing manufacturers to add intuitive intelligent voice control to any cloud connected product that has a microphone and speaker, including voice-controlled speakers, wearables and hearables.

Derived from the SmartBond DA14580, which has proven to be the smallest, highest integrated and lowest power Bluetooth SoC in mass production over the past three years, the DA14586 maintains this leading flagship position for these benchmark metrics, offering even greater flexibility to create more advanced applications with the smallest footprints and power budgets. Other enhancements include an advanced power management setup with both buck and boost converters, which enable support of most primary cell battery types.

“The Bluetooth 5 standard is one of the most highly-anticipated developments in connectivity, and Dialog is amongst the first out of the gate to enable development on this standard with a qualified standalone SoC,” says Sean McGrath, SVP and GM, Connectivity, Dialog Semiconductor. “Not only is DA14586 following in the SmartBond tradition of flexibility and low power consumption, but now, with Bluetooth 5 support and an integrated microphone interface, we have an SoC that opens the door to a new era of connected devices and applications.”

In addition to Bluetooth 5 support, DA14586 has double the memory of its predecessor for user applications, making it ideal for adding Bluetooth low energy to proximity tags, beacons, connected medical devices and smart home applications. Advanced features are also included allowing for Mesh based networked applications to be simply supported.

Like all Dialog SmartBond solutions, DA14586 is easy to design-in and supports fully-hosted applications. The SoC is supported by a complete development environment and Dialog’s SmartSnippets software to help engineers optimize software for power consumption. For cost-sensitive applications, the SmartBond family will also include the DA14585 with integrated One-Time Programmable (OTP) memory as an alternative to flash memory.

New Apple HomeKit Bluetooth Development Kit for iOS 10 and watchOS 3
Dialog Semiconductor also announced the availability of its latest Apple HomeKit development kit, to reduce the time-to-market and increase functionality of smart home and other Internet of Things (IoT) devices.

With the recent introduction of iOS 10, Apple HomeKit is now an integral part of iOS, including its dedicated app that creates an enhanced user experience. The Apple Home app is compatible not just with iPhone, but is also optimized for iPad and the Apple Watch running watchOS 3. With the app, an Apple TV or iPad can easily act as a smart home hub, enabling home control from anywhere.

Dialog’s second-generation kit supports all current HomeKit Accessory Profiles within Apple’s updated IoT platform. The kit itself is built on Dialog’s SmartBond DA14681 System-on-Chip (SoC), an integrated single chip solution that is purpose-built for IoT development, providing connectivity to a variety of battery-powered devices. It is the first SoC on the market with dedicated hardware acceleration for HomeKit security operations which ensures end-to-end application encryption, safeguarding personal information in transit. 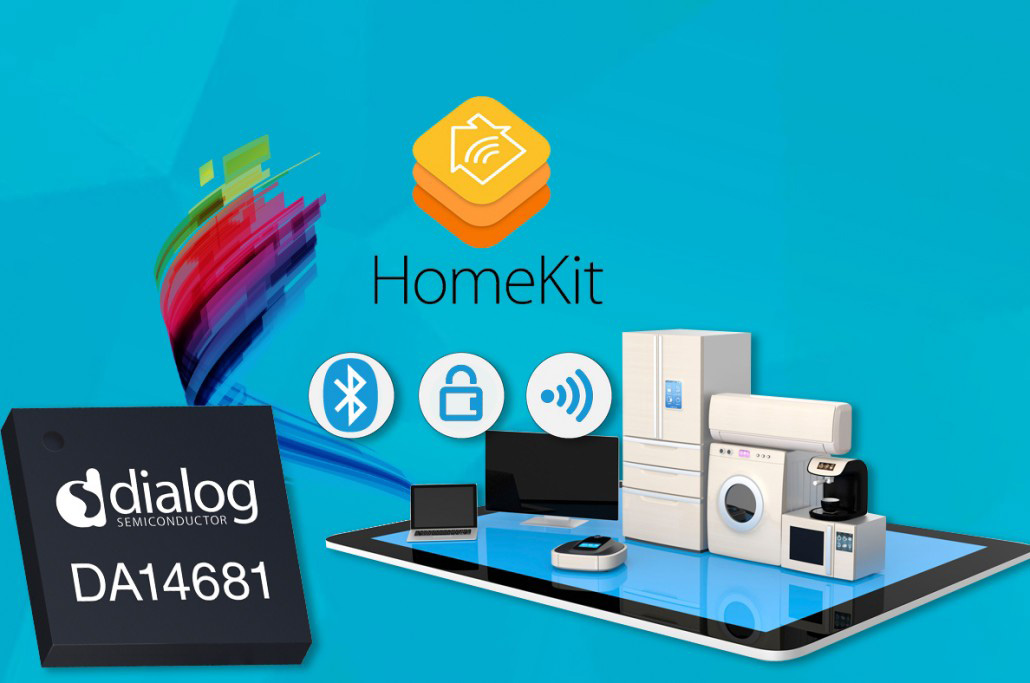 Its integrated topology streamlines development, minimizes BOM cost and enables the kit to consume less than five µA on standby. The development kit maximizes application space and flexibility, using a mere 170 kB of Flash memory and provides 64 kB of RAM for apps to utilize, even allowing user defined profiles to further customize applications on top of pre-configured HomeKit profiles.

To give developers all of the tools they need to create next-gen IoT applications, the DA14681 development kit consists of the HomeKit SDK, Basic and Pro versions of the kit, and a flexible add-on board to interface with the separately available MFi chip. The new HomeKit development kit and add-on board are now available from Avnet, Digi-Key and Mouser.
www.dialog-semiconductor.com/products/da14586
related items