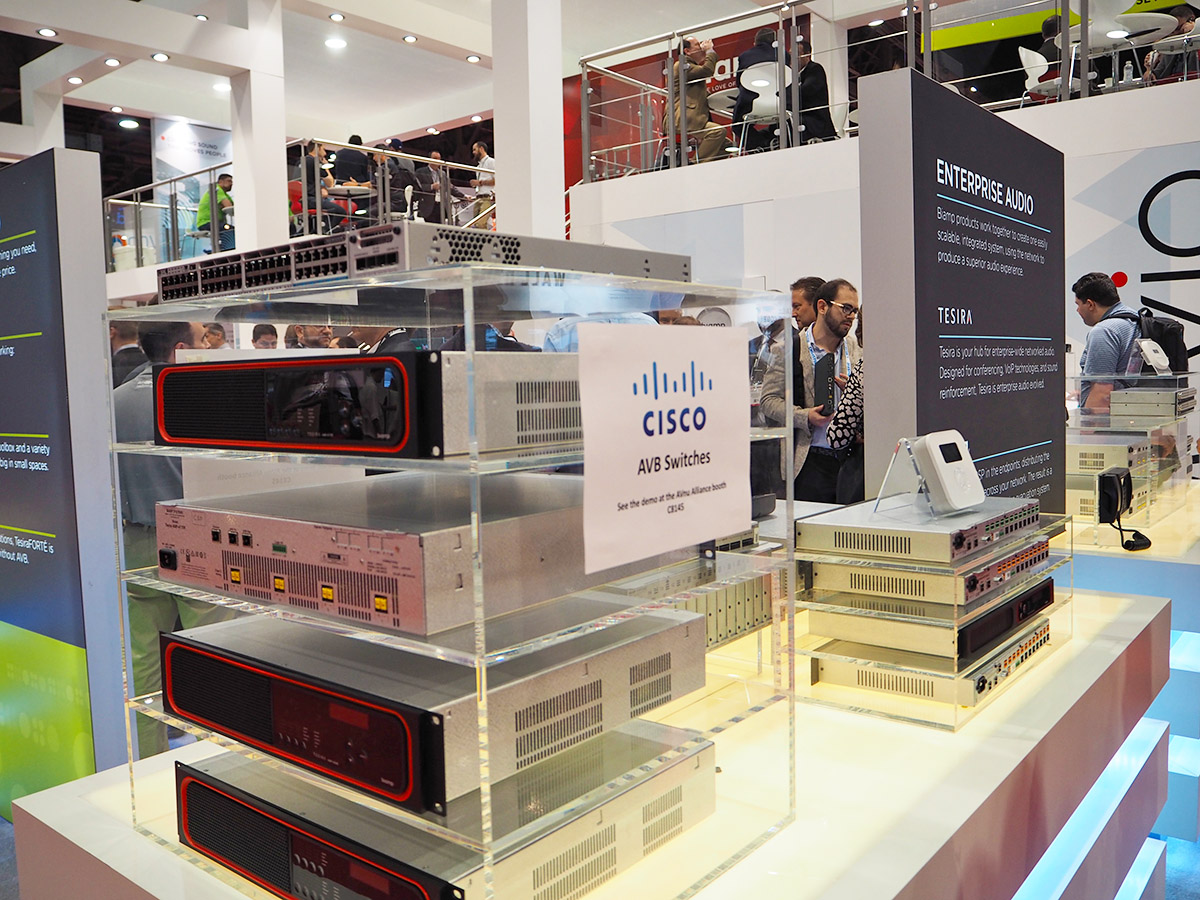 For quite some time much of the work related with IEEE 802.1 Audio Video Bridging (AVB) and Time Sensitive Network (TSN) standards have been ongoing under the radar of the audio industry, focusing essentially on applications areas which are considered of higher potential for deterministic networks, such as industrial and automotive applications. InfoComm 2016 changed that perception with multiple announcements, starting with the first public Cisco demonstrations of its Catalyst 3850 series switches, now finally supporting AVB. The presentation in the InfoComm 2016 AVnu booth clearly generated excitement among many manufacturers and industry professionals attending the show.

Cisco announced different Catalyst platforms supporting AVB, including the C3850 MultiGigabit 36x1G switch model where AVB is supported on 1G port and uplink port only, while the C3850 10Gig SFP+ switches with 12, 16, 24, 32 and 48 ports support AVB on all ports. Also, the C3650 24x48 Gigabit mini switch offers AVB support on all of its 12 or 24 ports (PoE capable) with 2x1GSFP, 2x10GSFP and 4x10GSFP+ uplink options. This announcement adds to the Cisco Nexus 7700 high capacity platform switches, which have been confirmed in March 2016 to support AVB/TSN, delivering 10, 40, and 100 Gigabit Ethernet ports, as required for video applications and by the broadcast industry.

Several companies have recently joined the AVnu Alliance, the organization promoting the technology and certification of AVB/TSN solutions, including Innovasic, a supplier of silicon and software, and Intrepid Control Systems, a supplier of testing, logging and simulation tools for vehicle networks, clearly indicating a growing interest in AVB/TSN in the industrial and automotive markets. Excelfore, a connected car platform specialist, also recently announced that its AVB/TSN software stack platform for audio networking as well as video end points has achieved AVnu Certification. This software reference platform is an affordable, scalable and production-ready embedded solution, allowing to quickly build a wide range of AVB-enabled audio or video products. 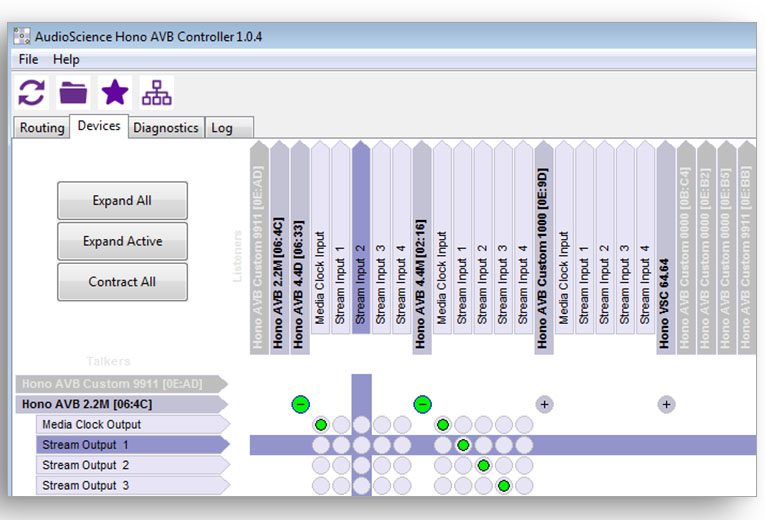 Perhaps the most highlighted announcement during the Las Vegas show, was the presentation by Biamp Systems of its TesiraLUX solutions, supporting low-latency 4K video over AVB/TSN networks. The new TesiraLUX solution builds on the legacy of the company’s line of digital signal processing (DSP)-based products, now transporting both audio and video signals over a single network and finally adding the ‘V’ in ‘AVB.’

The Biamp TesiraLUX solution features automatic handling of lip-sync, turning Tesira solutions into a complete network media platform with support for the latest video formats, with 4096x2160 resolution at 60Hz, high dynamic range (HDR) and the Rec. 2020 color space. It can accept video at up to 16-bit color depth with 4:4:4 chroma subsampling, and supports up to 8-channels of embedded PCM audio which can be broken out to be routed and processed independently. By utilizing AVB/TSN, TesiraLUX guarantees a total system latency of less than two frames (33ms at 60Hz), including scaling, compression, and network transit. 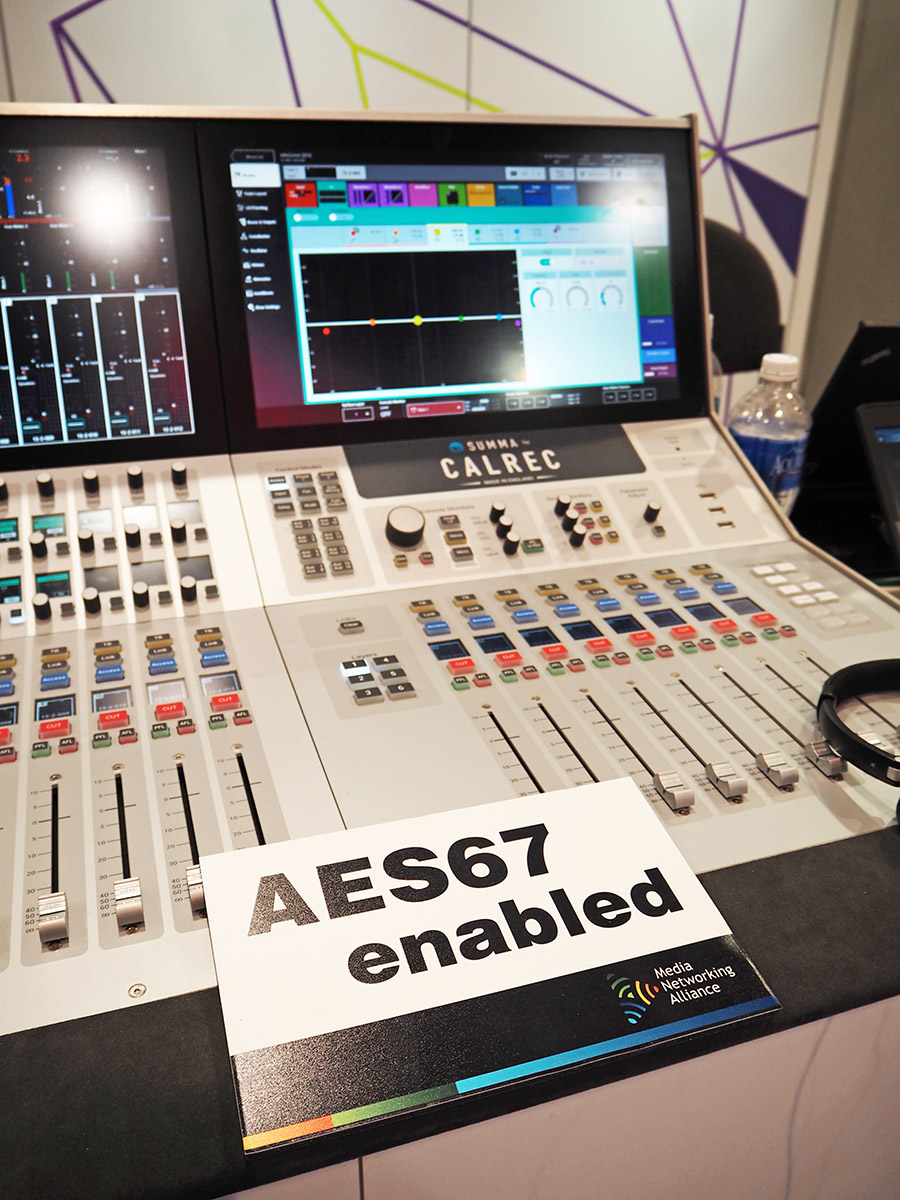 AES67 AVB in Harmony
Among the AVB presentations at the show and the demos that AVnu promoted in its own booth, the main attraction was undoubtedly the demonstration of AVB working with AES67 streams, proving that the new interoperability standard which is already supported in Dante, Ravenna and Q-LAN networks could become effectively an independent solution of existing layer protocols.

The initiative, promoted by Coveloz, was the world’s first public demonstration of AES67 over an AVB foundation. This means using automatic bandwidth reservation (IEEE 802.1Q) and resilient synchronization (IEEE 802.1AS) for ensuring low-latency, high-quality and easy-to-use AES67 transport. The presentation at the AVnu Alliance was promoted in partnership with Extreme Networks - supplying an AVB switch - and Calrec Audio, which supplied a Summa broadcast console with integrated Hydra2 router core, receiving the AES67 audio stream (L24 linear PCM audio at 48kHz) from the Coveloz BACH development platform through a Calrec AoIP interface, which among many other features supports AES67/Ravenna, as well as AVB, Dante and SMPTE 2022-6 video (see diagram).

The Coveloz BACH Pro-Audio Networking and Processing FPGA Platform is a complete software and hardware implementation solution with the flexibility of reconfigurable hardware built around the Altera System-on-Chip (SoC) FPGA. This makes it a fully customizable platform for professional audio networking and processing, already AVnu-Certified for Ethernet AVB/TSN and with AES67/RAVENNA support. 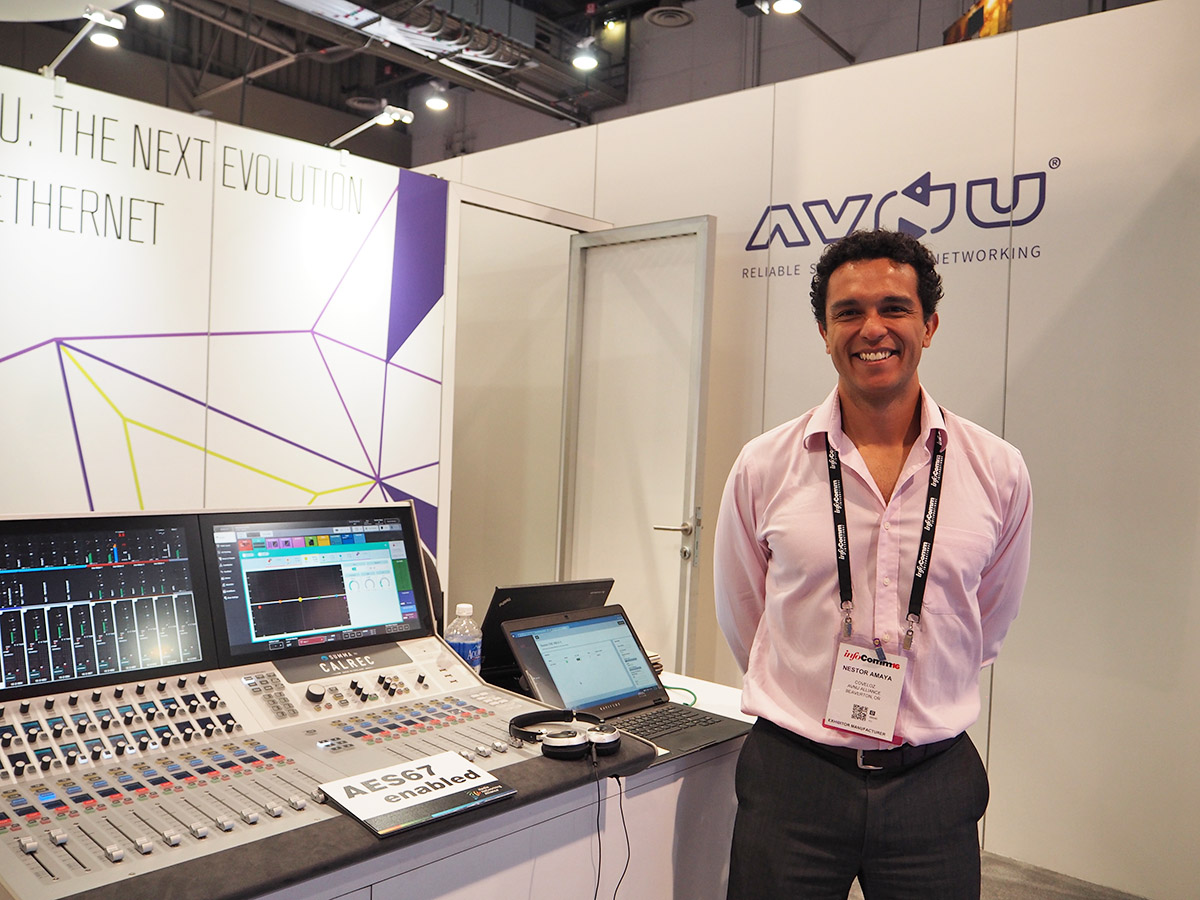 As Nestor Amaya, President of Coveloz, explained, the demonstration had to surpass some minor configuration hurdles, basically relying on the RAVENNA/AES67 implementation to connect to Ethernet AVB, but serving as proof of concept that AES67 audio streams can effectively be integrated with AVB/TSN systems and work in harmony. The Coveloz implementation was also a demonstration of the advantages of harmonizing the AVB/TSN control plane with an AES67 data plane.

As Nestor Amaya explained, “Coveloz is demonstrating our easy-to-use and deterministic network control of AES67 audio transport running over an Ethernet AVB foundation. This means that AES67 streams, if accepted by the network, are guaranteed to get through on-time per IEEE 802.1Q Stream Reservation Protocol (SRP), with reliable and precise synchronization under all traffic conditions, using IEEE 802.1AS – Generalized Precision Timing Protocol (gPTP). We are using the same AES67 transport that Coveloz has proven interoperable with many vendors, while the control plane implements a standard AVB/TSN set of protocols. The result is industrial harmony!” 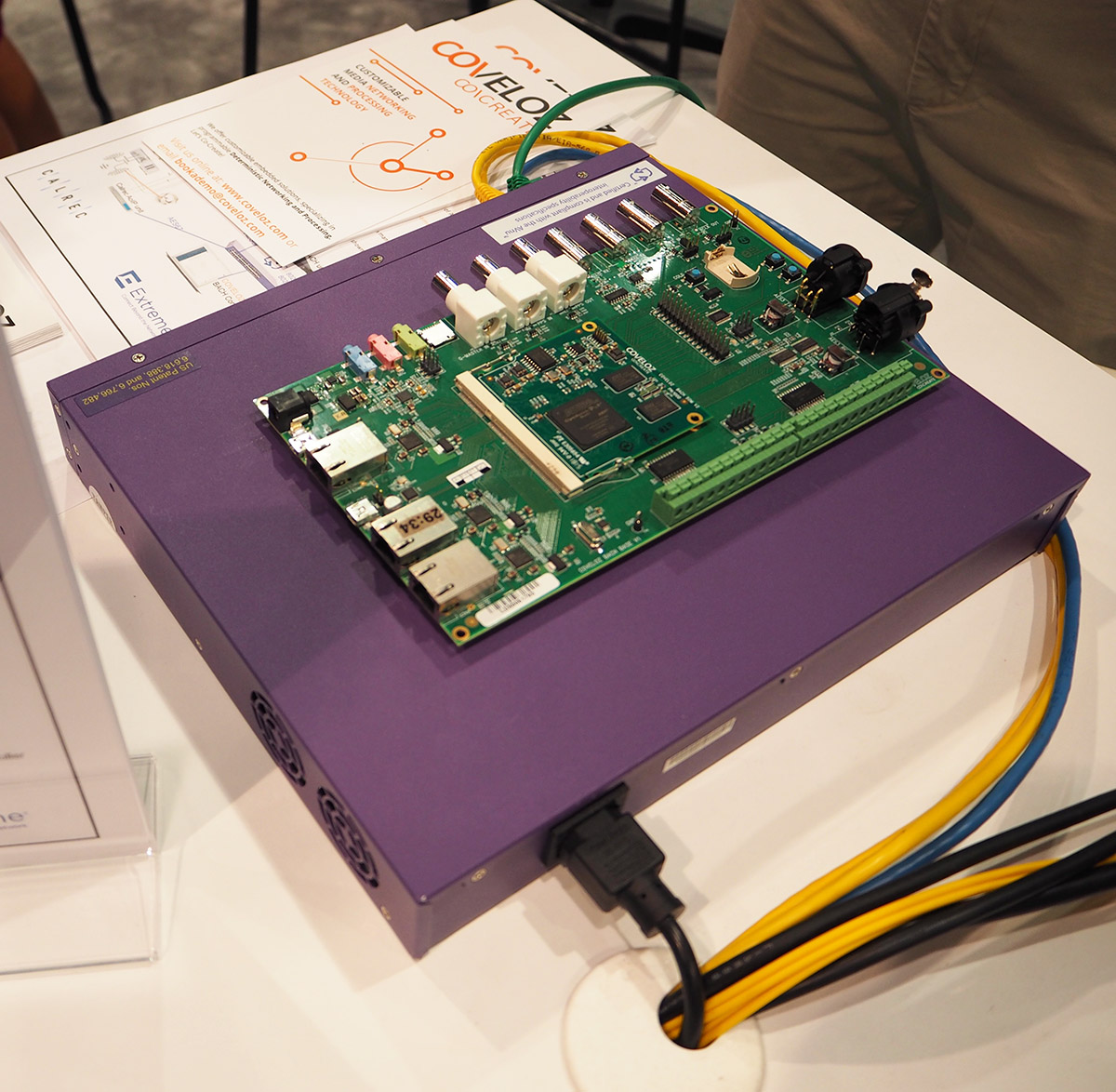 According also to Nestor Amaya, the demonstration was extremely well received by some audio companies who already support AES67, leading Coveloz to propose the idea of a certification of the solution by the AVnu Alliance, a process which will need to be endorsed by the Media Networking Alliance (MNA) – the professional AV industry alliance, charged with promoting awareness and adoption of AES67. This could be a good thing for the whole industry - and could be extremely important for some application segments, such as broadcast - but there are challenges to overcome, such as the notion by some members of the MNA that this would be a validation of the AVnu Certification philosophy and serve to promote the AVB/TSN standards in an industry which is already committed to interoperability. For the moment, Coveloz should be congratulated for the initiative and the determination to overcome those challenges.
coveloz.com | avnu.org | medianetworkingalliance.com
related items