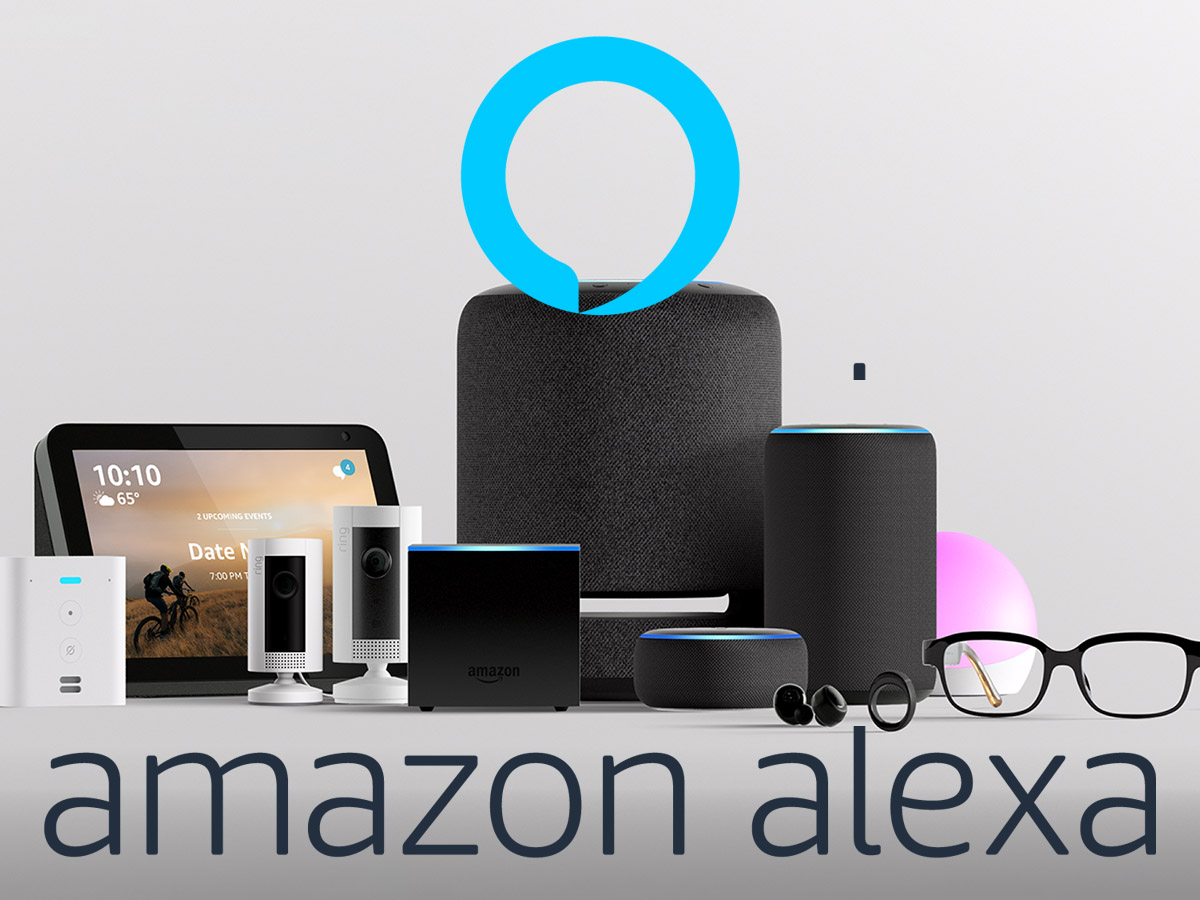 As Amazon clearly stated, there are now even more ways to access Alexa voice services at home with the all-new Echo, Echo Flex, Echo Dot with clock, and Echo Show 8. The new Echo Studio smart speaker ($199.99) aims to introduce the best-sounding Echo ever and is the first smart speaker to claim the ability to deliver an immersive, three-dimensional audio experience with Dolby Atmos.

Amazon also announced a new invitation-only program - Day 1 Editions - to allow users to experience and contribute to new inventions. Included in this program, Amazon announced Echo Frames, a pair of audio augmented reality glasses, similar to the Bose Frames, and the Echo Loop, a voice capturing “smart ring” with sensors.

The New Echo Devices
Expanding and updating its existing range of Echo devices, all designed to support Amazon Alexa voice services in different application scenarios, Amazon introduced an all-new basic Echo smart speaker, featuring an updated fabric design and improved sound reproduction, still sold for only $99.99.
The next model in the new Echo range is the Echo Flex, described as the most affordable way to add Alexa to any space in the home, a new plug-in adaptor that is also a smart speaker and wireless interface for only $24.99. The device plugs directly into a standard electrical outlet, and brings Alexa support to any home area, including a very basic small speaker and a built-in USB port to charge other devices and accessories.
The next introduction is also an affordable option and is the Echo Dot with clock, a compact device with a bright LED display that shows the time, outdoor temperature, timers, and alarms, for only $59.99.
Also in the screen category, Amazon introduced the new Echo Show 8, with an 8-inch display, more powerful sound, and a built-in camera shutter for privacy, available for $129.99. 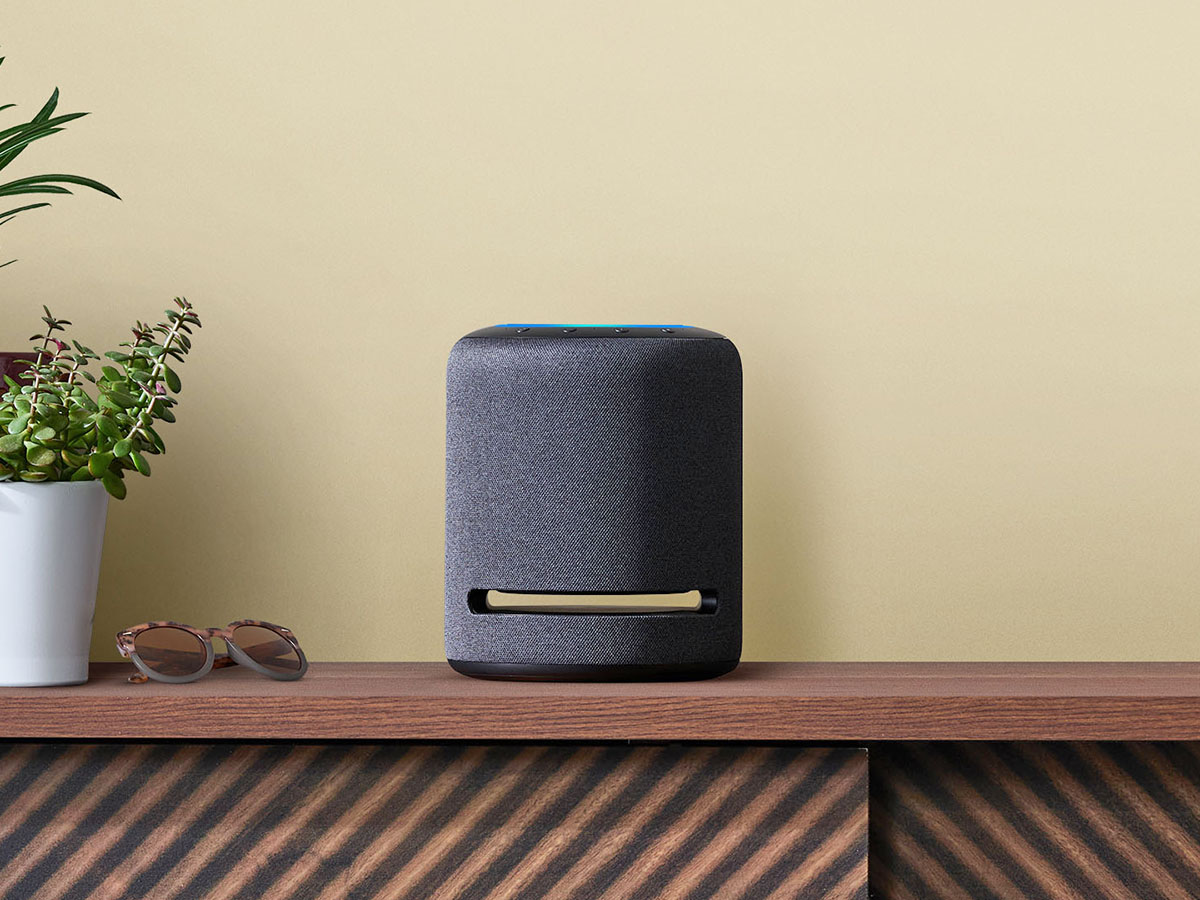 According to Amazon, the Echo Studio has been purposefully engineered to create premium sound, starting with its 5.25-inch woofer and 330W of peak power, generating rich bass by using the bass port at the bottom to maximize airflow and bass output from the woofer. Other drivers include a 1-inch tweeter and three 2-inch midrange speakers for the midrange and high frequencies. Plus, it has a 24-bit DAC and a power amplifier with 100 kHz of bandwidth for high-res, lossless music playback, available via Amazon Music HD (the recent announcement being a good indicator that a design like this was coming).

Like the HomePod, the Echo Studio is also able to automatically sense the acoustics of the surroundings, and fine-tune audio playback to deliver optimal sound. But the main key selling point for Amazon includes its cooperation with Dolby, which according to the company makes the Echo Studio the first smart speaker to deliver an immersive three-dimensional (3D) audio experience using Dolby Atmos. Interestingly, when mentioning the 3D audio effect, Amazon also mentions support for Sony’s upcoming 360 Reality Audio technology but no details are yet available. 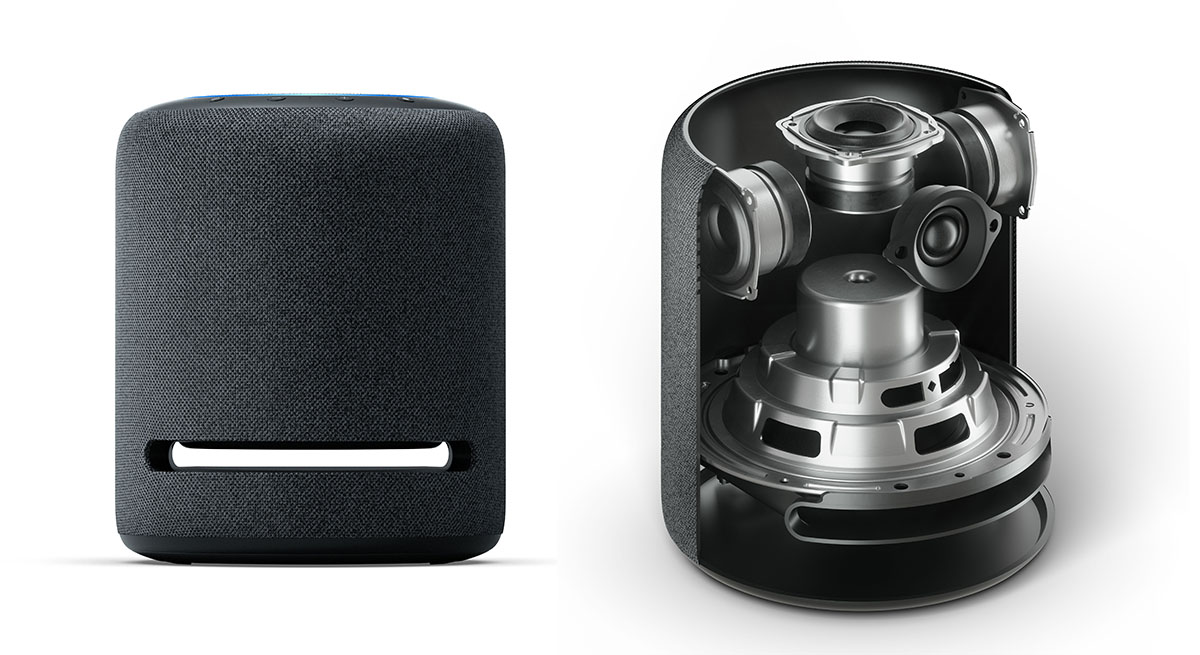 Next up with the "immersive" 3D audio effect, Amazon places the ability to playback high resolution audio (HRA) in the key selling points for the new Echo Studio smart speaker. But Amazon also reveals that Universal Music Group, Warner Music Group, and Sony Music Entertainment are bringing a growing library of new music, current hits, and legendary tracks to these "immersive formats." Dolby Atmos, MPEG-H? We don't know for now. Calling it "Native 3D Music," Amazon apparently is hinting that these majors intend to sell content in new object-based, and immersive audio formats. Or maybe its just another way to market HRA, considering the way Amazon describes its lossless streaming services as High Definition.

What the company revealed is that the new Echo Studio will be sold with a subscription to Amazon Music HD lossless FLAC streaming and that, “coming next year,” those potential new immersive music formats will also be available through TIDAL HiFi. To sample "native 3D music" on Echo Studio and Amazon Music, users will just simply have to ask “Alexa, play the best of 3D music.”

Amazon also allows one or two Echo Studio devices to be paired with select Fire TV devices for audio playback with "multi-channel sound and support for Dolby Atmos, Dolby Audio 5.1, and stereo audio."

The new Echo Buds
Amazon's plans to enter the true wireless space with it's own hearables design - featuring naturally Alexa built-in and the ability to use voice commands anywhere - was rumored for some time. The fact that Amazon had hired the former Doppler Labs team, a pioneering effort in the true wireless space, was a clear indicator that Amazon wanted to enter the space - one of the fastest growing consumer electronics categories ever. 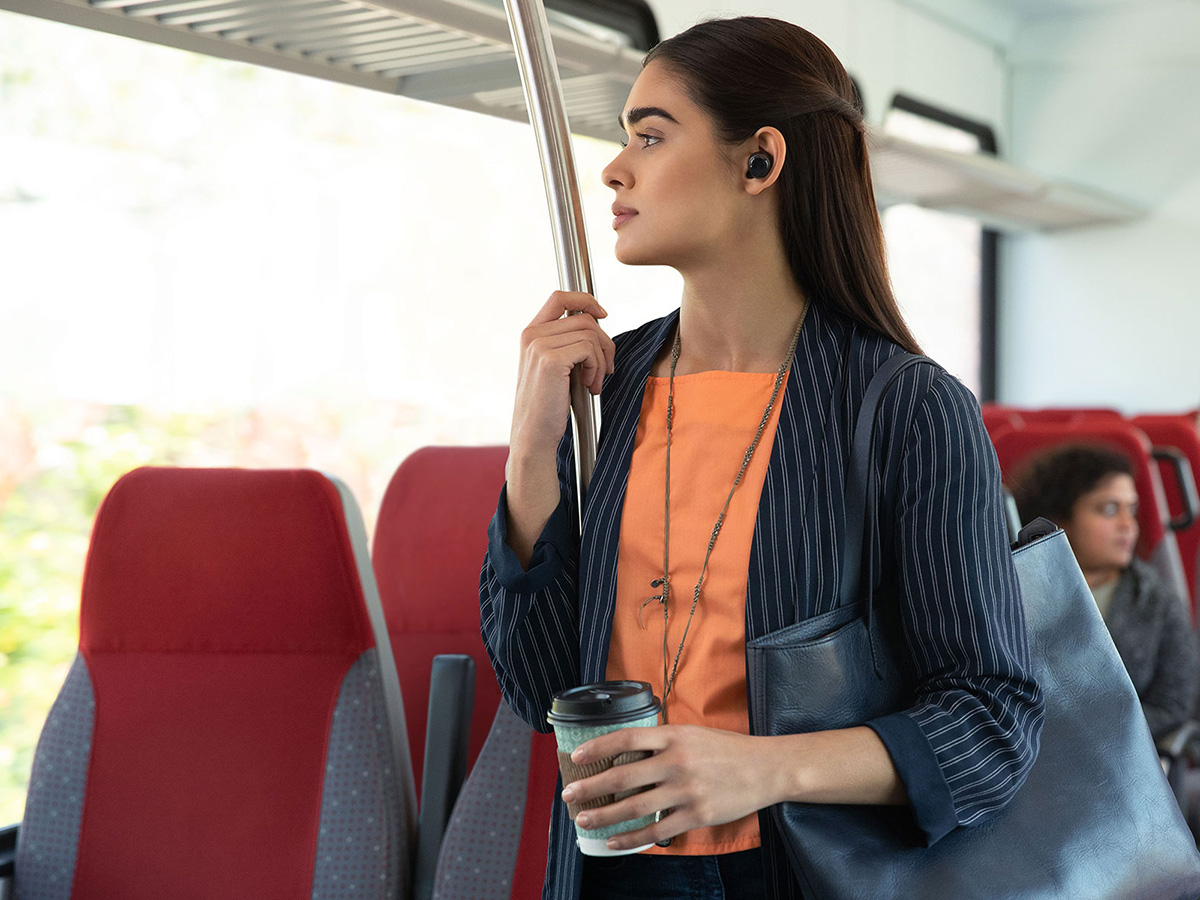 What type of design and what would be the key selling points for a new product from Amazon - considering how crowded the space has already become, and the knowledge of current technology limitations, particularly in terms of radio modules and battery - was the big question everyone was asking.

The new Amazon Echo Buds surprised positively in the fact that the company decided to take the lead and introduce active noise cancellation (ANC) technology, which is a clear innovation given the challenges for such a compact platform. Obviously, the fact that the Echo Buds had to support voice assistants and already needed to feature substantial audio processing abilities, demanding effective noise reduction and voice optimization algorithms for optimal recognition outdoors, provided the foundation platform for introducing ANC as well.

But apparently Amazon was more interested in entering the market fast, instead of spending more time with engineering challenges, and that explains why they opted to license some of the best ANC technology available in the market, in this case through an agreement with Bose (which apparently is also cooperating with Amazon in other domains, such as the Frames audio augmented reality wearables).

The result of this first effort is that the new Echo Buds don't innovate at all in terms of form factor - looking very similar to existing TWS earbuds from Bragi or the Galaxy Buds from Samsung. This makes it possible to introduce the new wireless earbuds with Bose Active Noise Reduction Technology and hands-free access to Alexa for just $129.99, competing effectively with many lower cost options existing in the market (and sold by Amazon), but hardly able to challenge Apple's AirPods. 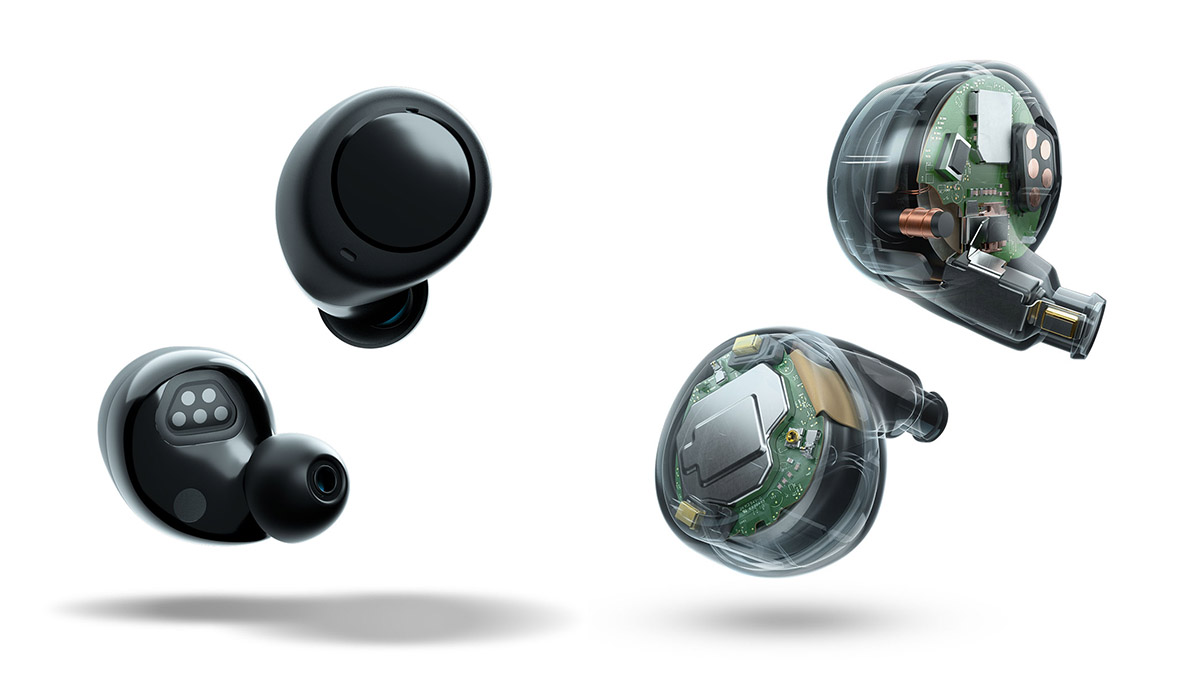 Each Echo Buds earbud has two external beamforming microphones and one internal microphone that work together to reduce ambient noise so Alexa can hear the user anywhere. And of course, audio quality was also a consideration, with each earbud also including two premium, Knowles balanced armature drivers. Amazon claims the driver design is inspired by in-ear monitors used by professional musicians - but we’ve heard that many times…

Regarding the Bose Active Noise Reduction Technology, the features are activated by tactile sensors and not environmental awareness (for now). Users have to double tap either earbud to turn ANC on or Passthrough Mode on. The platform uses a combination of Realtek RTL8763B Bluetooth 5 System on Chip, Intel S1000 Digital Signal Processor, and Analog Devices ADAU1777 Audio Codec processors.

The Echo Buds connect to Alexa through the Alexa app on any mobile device and use that device’s data plan to access all the features, such as music, navigation, calling, and more. Users can tap and hold the Echo Buds to access also the phone’s native voice services, like Siri or Google Assistant.
www.amazon.com
related items