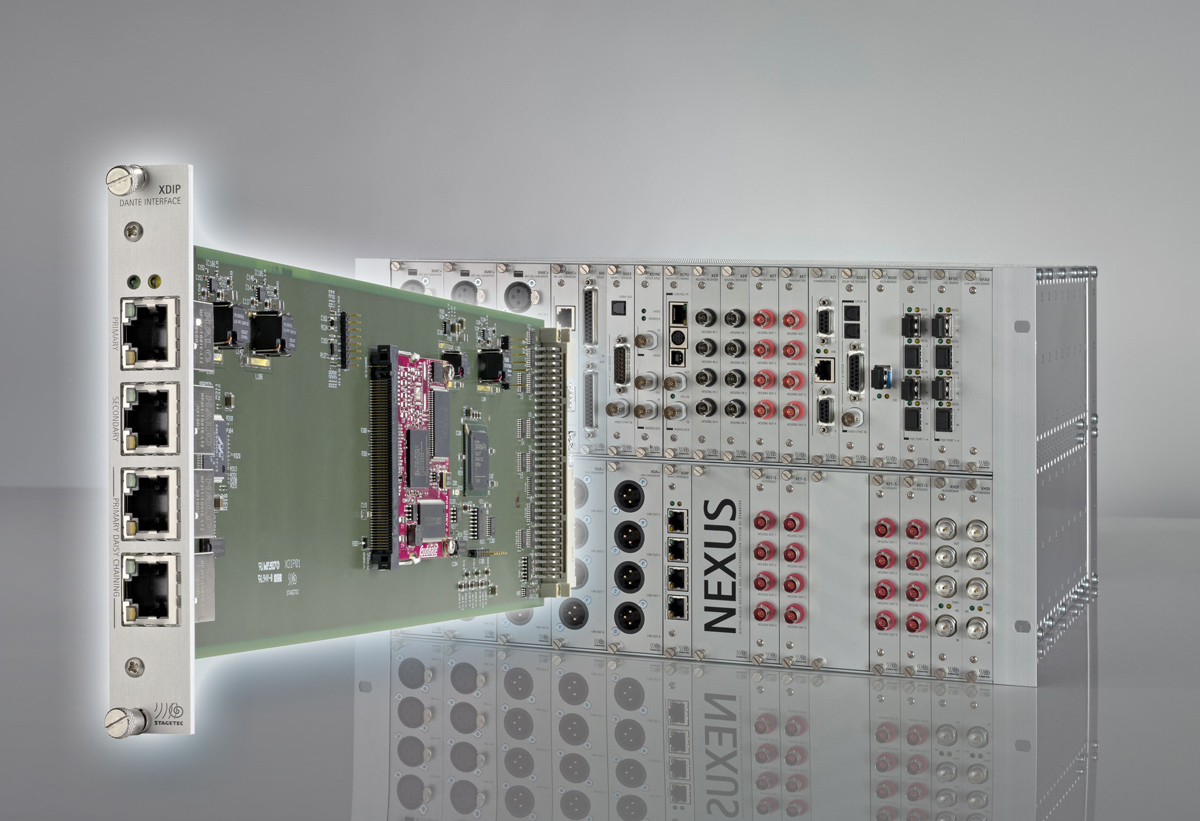 In 2012, Stagetec introduced a new interface board for its NEXUS modular network system and digital audio routing system at the heart of all Stagetec’s solutions. The new XDIP board was introduced at the Prolight+Sound 2012 show in Frankfurt and connects NEXUS to networks running Audinate’s Dante, which enables powerful audio and media networks to be created on existing standard Ethernet infrastructure using TCP / IP.
NEXUS audio routers are considered to be the originator of distributed audio systems and Stagetec received an Emmy award in 2010 for the technology, including for the quality of the patented True-Match converter, which ensures realistic signal conversion from the analog to the digital domain. 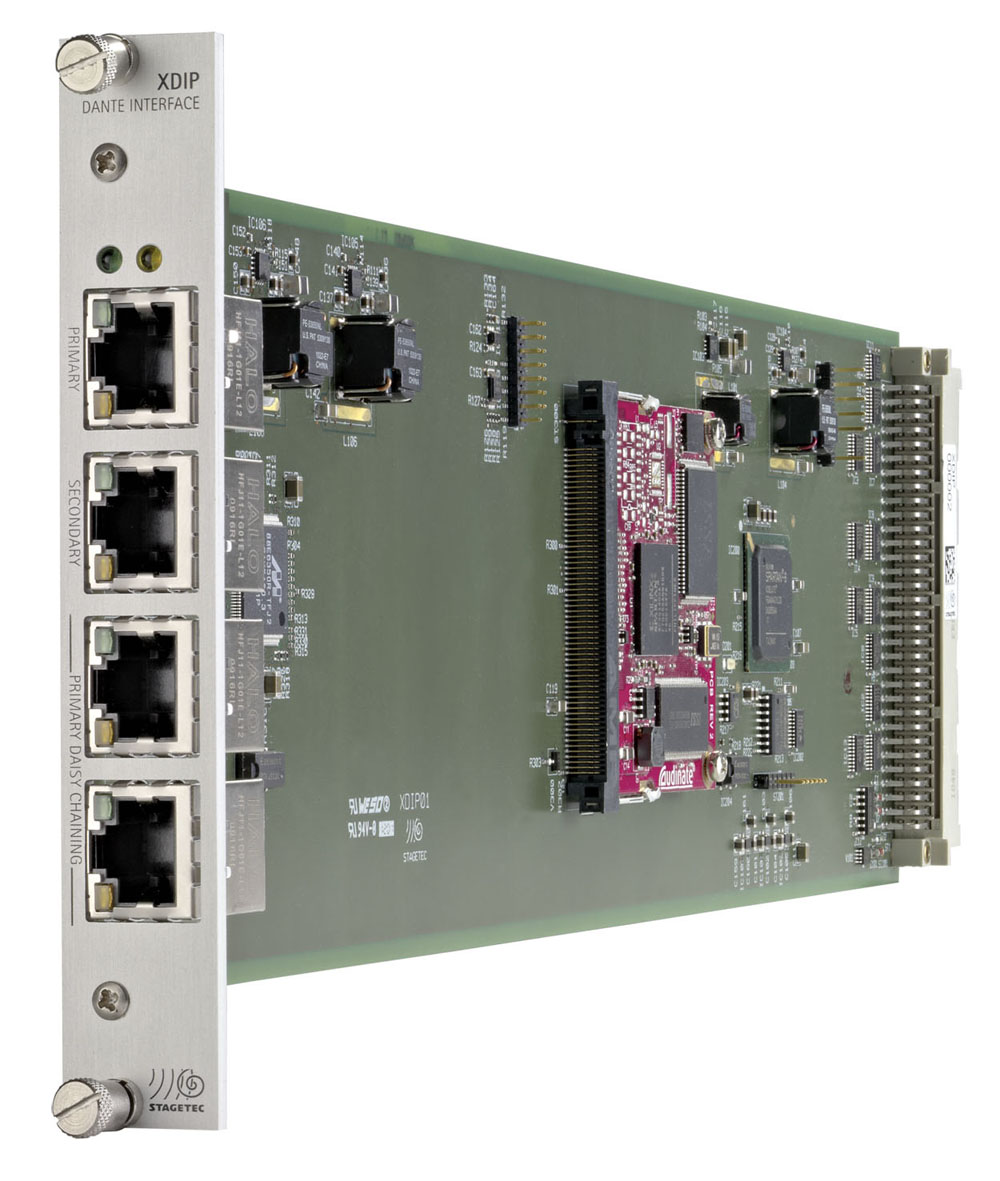 The new NEXUS XDIP module supports up to 64 bidirectional audio channels with different sampling rates. It is fully compatible with Dante’s unique plug and play network integration with automatic device discovery and system configuration. A preferred field of application is installations where existing standard Ethernet-LAN’s are to be used for audio signal transmission.
Also significant is facilitating the integration of peripheral devices into NEXUS, which already exist in local area networks. This might include DAWs or simply a standard PC, which needs to be used for simple monitoring from time to time, e.g. in a broadcasting centre.

As an answer to the ever-increasing number of audio channels in networks, the capacity of NEXUS systems has grown over the years. Already in 2014, Stagetec announced that its NEXUS Base Devices are now able to form a complete network with enabled inputs and outputs to be interconnected irrespective of their position in the network. The fibre-optic cables between the individual Base Devices enable these networks to cover long distances, making links between rooms, buildings and even cities. The most recent step towards huge, flexible and dynamic audio networking was the introduction of the new NEXUS XRT router board which can route up to the immense number of 8000 channels on one board.

The market is embracing Audio IP networking and in particular the Dante protocol by Audinate. Nevertheless, while Dante is based on IP packet transfer on a standard Gbit Ethernet network, NEXUS routes the audio samples with the help of a time division multiplex bus system (NEXUS). Recently, Stagetec published an interesting white paper comparing the uses of both technologies and explaining the best way to leverage the existing integrations.

Stagetec recognizes that the simplicity and ubiquity of Dante networks are ideal to send signals to locations, which are reachable through an existing network. For example, an OB truck connected to the network of a stadium, avoiding laying temporary cabling for the time of the sports production. In contrast, Stagetec defends that a TDM based NEXUS system is a fully synchronous solution where audio is transferred with the highest priority, guaranteed timing and with the lowest possible latencies. “One of the main advantages of TDM technology is and will always be that these systems are absolutely superior in guaranteeing the lowest possible latencies. NEXUS route audio within a single audio sample or – in large networks – within about four samples. At a sample rate of 48 kHz, this is only 20 (or up to 80) microseconds; at 96 kHz, this reduces to just 10 (or up to 40) microseconds. With IP switching such values are inherently unattainable,” they state. 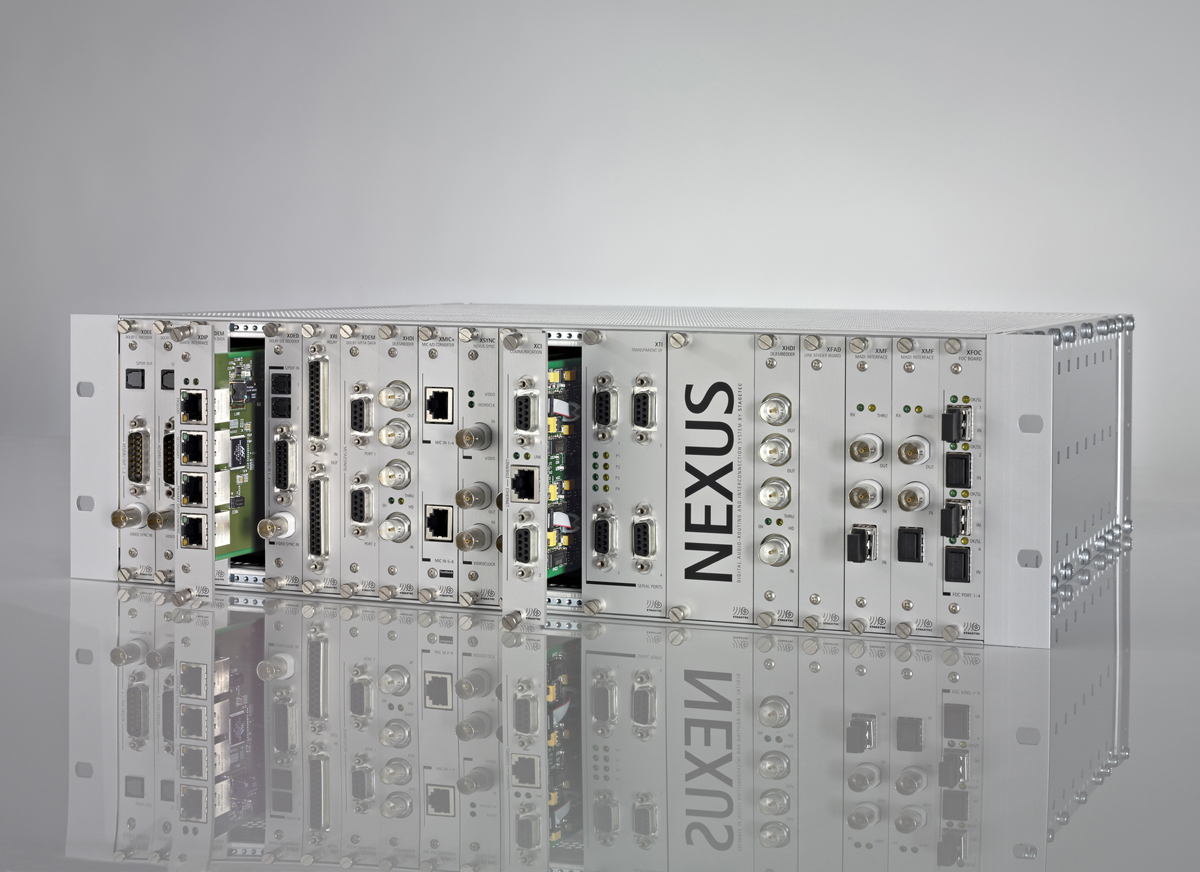 Stagetec also refers to timing problems in IP audio networks when several channels are to be switched at the same time. “By principle, the simultaneity of this switching cannot precise because the IP packets of each channel are routed through the network individually. In case you want to switch all audio lines from one studio to the other, you better use TDM rather than IP based technologies.”

The conclusion, is that both methods – distribution of audio over IP on the one hand and TDM as used in dedicated professional routing systems such as NEXUS on the other - have very different pros and cons. “The technologies complement each other rather than the newer one being on course to replace the older completely in the foreseeable future. The consequence is to combine both ways of switching to gain the maximum advantages.” 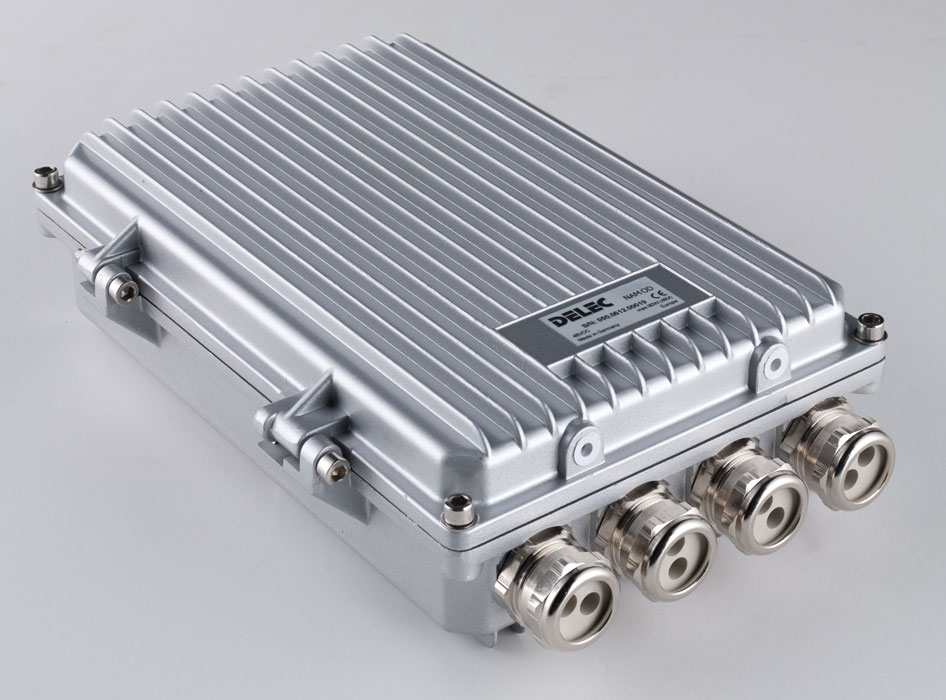 Another interesting possibility with Dante integration is the DELEC NAM, acronym for Network Amplifier Module, a compact Dante decoder for Dante networks with integrated power amplification. NAM is a small device that is typically installed in the vicinity of the monitoring position where it makes it simple to monitor audio signals from Dante networks.

DELEC’s NAM is available in several different variants. In its standard version, it has a Dante interface which can retrieve and decode four signals from the network. The four analogue line outputs are equipped with power amplifiers capable of delivering 12 watts average power. This means that the audio decoded from the Dante stream can be sent directly to passive speakers.