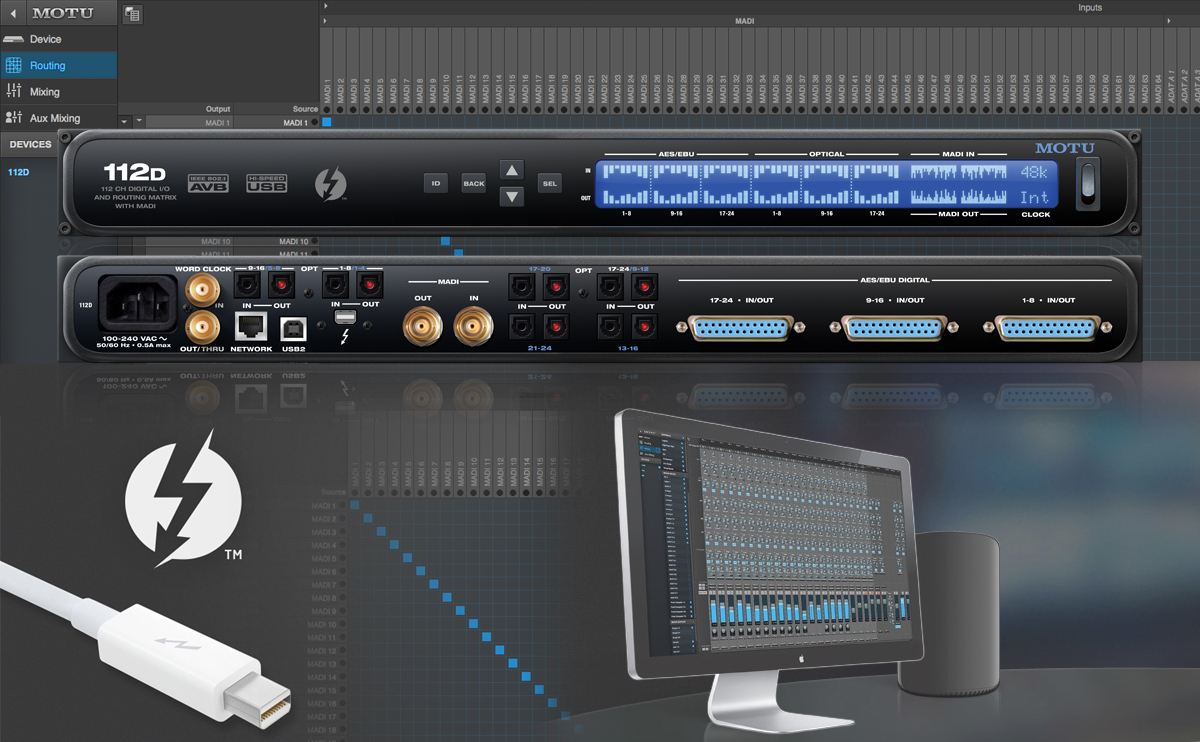 The seventh in a series of new, high-end audio interfaces from MOTU, the new MOTU 112D serves as the flagship digital interface of the brand’s new line, offering 24 channels of AES/EBU, 24 channels of ADAT optical and 64 channels of MADI (AES10) for a total of 112 simultaneous digital I/O channels, all in a single rack space. Operating on its own or as a component of a MOTU AVB network system, the 112D shares the many powerful mixing, routing, networking and wireless control features found in MOTU’s AVB interface lineup.

Like MOTU’s popular 1248, 8M and 16A interfaces, the 112D provides 128 simultaneous channels of computer I/O over Thunderbolt. All seven interfaces in the lineup, the 112D included, offer cross-platform, class compliant, highspeed USB 2.0 connectivity (compatible with USB 3.0 and iOS), or, as an alternative to USB or Thunderbolt, audio interface operation over AVB Ethernet when connected to a recent-generation Mac running Mac OS X Yosemite (10.10).

“When it comes to high channel-count digital connectivity, the 112D pretty much does it all,” says Jim Cooper, MOTU Director of Marketing. “With MADI, multiple banks of AES/EBU and optical I/O, plus computer I/O and AVB networking, the 112D acts as a central digital hub, allowing users to unify their mixing console, audio workstation and other digital audio gear, and then link it all to an AVB audio network with sub-millisecond routing, hundreds of audio channels, standard Ethernet infrastructure and long, affordable cable runs.”

Users can connect all their MADI, AES/EBU and optically-equipped gear, plus their computer, mixing console, and AVB network, then route channels from anywhere to anywhere else. With a few finger taps on their iPad screen, users can convert any format to any other. AVB network cable runs can be up to 100 meters long on standard, affordable CAT-6 wiring. For any situation that involves both MADI and audio networking, the 112D serves as an economical and capable MADI-to-AVB converter with near-zero latency and flexible routing and splitting to/from the AVB network.

One primary benefit of using MOTU devices as an AVB audio interface is that users can place their 112D or other MOTU interface up to 100 meters away from their computer using standard, affordable cabling. Price for the 112D is $1,495 USD.
www.motu.com
related items