Since shipments started in November 2014, Cymatic Audio’s uTrack24 24-track recorder, player, and interface has more than lived up to its dexterous design brief as the go-to solution for anyone wishing to handle high-quality recordings or audio playback without computer constraints. The uTrack24 records directly onto USB media plugged into its uncluttered front panel. There’s also an internal DSP mixer allowing to create a stereo mix of the 24 tracks directly from the headphone output on the front panel. It further features Level, Pan, Mute, and Solo controls for all 24 inputs, making an external mixer redundant.

The 24 three-colour LEDs clearly show the level of each of its namesake channels while those LEDs can conveniently be used as a 24-segment level meter for one of those channels individually. Additionally, a large LCD clearly shows all additional important information and allows fast and intuitive editing of parameters via an endless push encoder.

Lastly, large illuminated front panel-positioned transport controls clearly help with making hassle-free recordings and are specifically suited to overcoming far from ideal lighting conditions that are typically associated with onstage and off-stage operation. Little wonder, then, that the uTrack24 is proving popular with its intended user base.

Now, seamless integration of the uTrack24’s multichannel audio I/O with MADI-based audio systems will become reality with the upcoming release of the uTrack24 MADI Module, making it possible to record 24 separate audio tracks from the output of MADI-equipped digital consoles and stage boxes. Conversely, 24 tracks of uTrack24-delivered pre-recorded digital audio can, of course,  be outputted to a digital console’s inputs.

The new user-installable MADI card features optical in and out and (BNC) coaxial in and out connectors, allowing the uTrack24 to connect with any MADI digital console for 24-channel virtual soundcheck playback or recording using long cabling runs. In order to activate the uTrack24 MADI Module, users just have to download the latest firmware update from Cymatic’s dedicated webpage.

All uTrack24’s 24 analogue outputs (on standard 25-pin D-Sub connectors) still remain active while using the uTrack24 MADI Module’s digital outputs. By providing the MADI Module as an option for the uTrack24, Cymatic allows adapting its recorder/player to new applications, while keeping its base price accessible to more users that just need the standard input/output options. 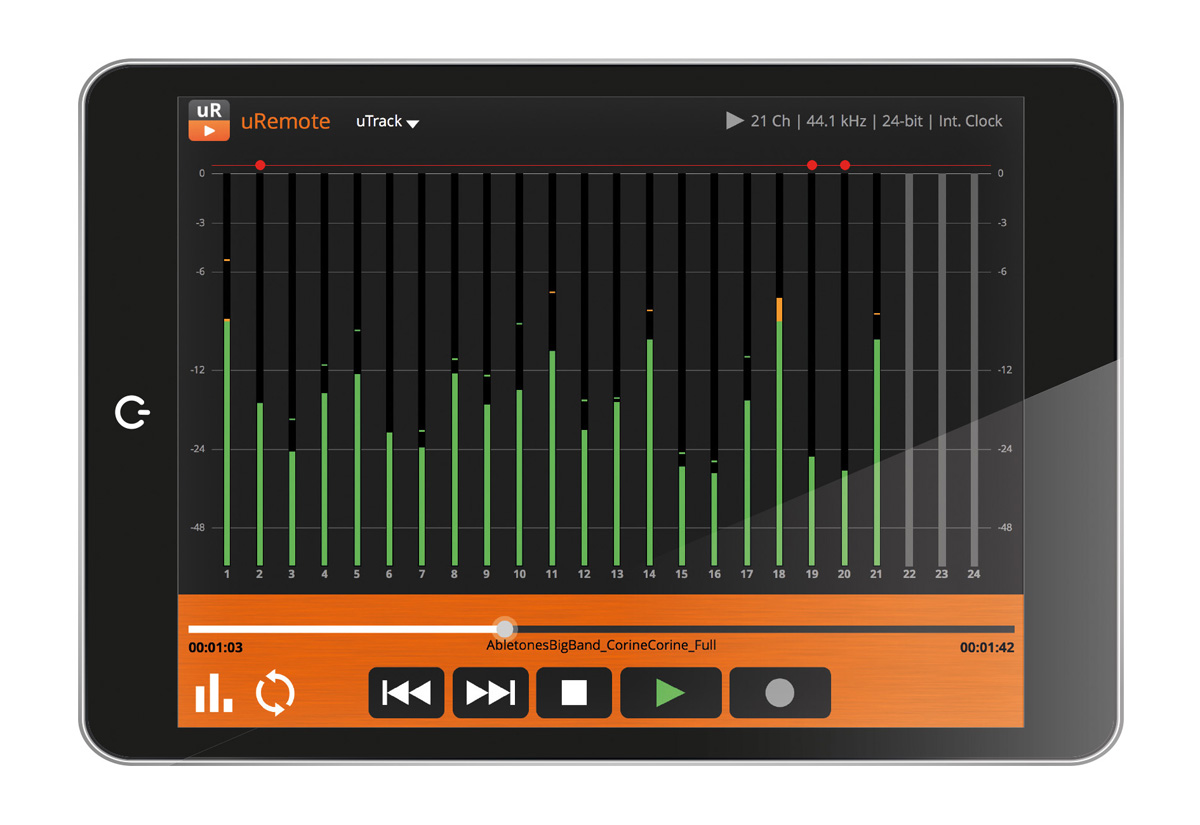 The new app allows uTrack24 users to fully control and monitor most operations remotely and wirelessly, without the need to reach inconveniently-positioned racks. After installation of the latest firmware, the uTrack24 just needs to be connected to the network port of a standard off-the-shelf wireless router and installing the uRemote app on any iPad, iPhone, Mac OS X or Windows computer connected to the same network.

Whatever way the users choose to work with uRemote, wireless remote functionality is as extensive as its feature list: the home screen shows all recording/playback information at a glance with full transport controls and playback bar available at all times on all screens. The playback bar allows instant navigation to any time or marker location and the one-touch markers list displays all recorded markers with exact time locations.