Dutch company Cymatic Audio introduced the uTrack 24, a universal hardware recorder / player / interface in 19" format, designed for people who want to do high-quality recordings without the need of a computer. The uTrack 24 also turns into a powerful and comprehensive audio interface when used under OS X, Windows and iOS and Cymatic promises the uTrack 24 will be able to playback standard MIDI data.
During the 137th AES Convention we visited Cymatic Audio, a new Dutch manufacturer which previously designed an interesting “portable” desktop 16 track recorder, which could also be used as a 16x2 USB audio interface. We thought the LR-16 had interesting features and an affordable price, but little else… The highlight from Cymatic Audio at the AES was the new uTrack 24, a 19” rack device, which somehow makes so much more sense because of all the built-in possibilities and the improved design. 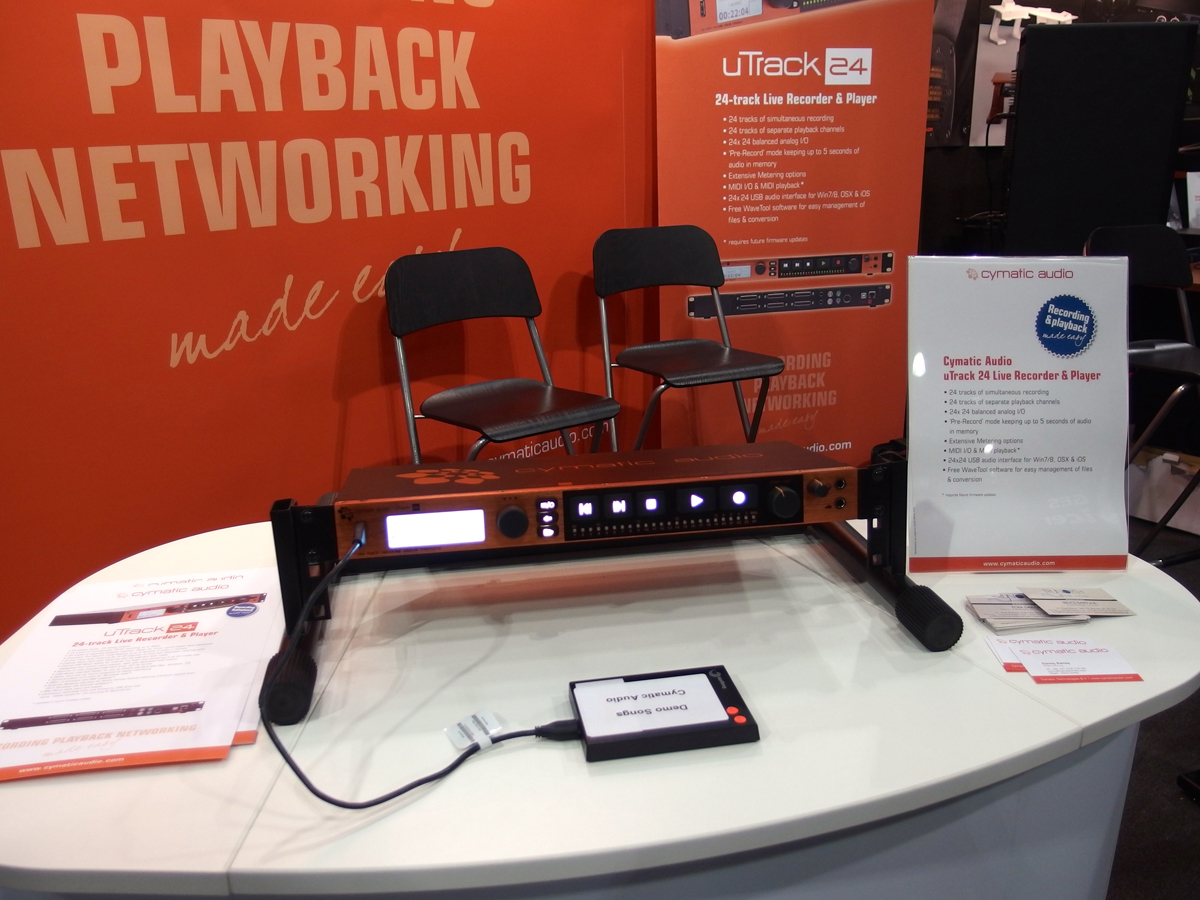 According to Cymatic Audio CEO, Arie van den Broek, “Ever more musicians who perform live are looking for backing systems that allow them to play onstage without the need to rely on a computer, which can crash anytime. Likewise, many bands, choirs and orchestras do not want to read through a pile of handbooks to do multitrack recordings. Many people long for a multitrack recorder that works by simply pressing Record.”

That’s exactly what uTrack 24 does, but with the right form factor, while also doing much more. The uTrack 24 records directly onto USB media plugged into the front panel, while a three-color LED displays the level of all channels. The LEDs can also be used as a 24-segment level meter for individual channels. A big LCD shows all other important information and allows for fast and intuitive editing of parameters with an endless push encoder.

In order to make recordings hassle-free even in dark or hectic environments, the Cymatic Audio hardware recorder features big illuminated transport controls directly on the front panel. With its reduced size of only 1U, the uTrack 24 accepts up to 24 input and output signals via D-Sub multi-pin connectors. This allows even large live events to be recorded smoothly. Thanks to the BNC WordClock input and output, the recorder can integrate seamlessly into other digital recording environments.

The uTrack 24 can record 24 channels with a sampling rate of 48 kHz and up to 24 bits. And it can record up to 8 channels with a sampling rate of 96 kHz at 24 bits. The possibility to loop record endlessly is unique: Unlike with other recorders, there is no limit to the maximum recording time; the only limitation is the capacity of the recording medium. Recordings can be comfortably managed and converted into other formats with a free WaveTool software for Mac and PC.

Upcoming hardware module add-ons for the uTrack 24 will allow the use of other formats. Thanks to the internal DSP mixer, a stereo mix of the 24 tracks can be taken directly from the headphone output on the front panel. It further features Level, Pan, Mute, and Solo controls for all 24 inputs, making an external mixer redundant.

Besides its use as a recorder, the uTrack 24 can also play back up to 24 tracks, making it the perfect virtual sound-check provider for live applications. The Playlist mode is very useful in such cases, since it even supports uninterrupted playback.

When used under OS X, Windows and iOS, the uTrack 24 turns into a powerful and comprehensive audio interface with 24 inputs and outputs, as well as dedicated Control Room and headphone outputs, each with its individual level control.

The firmware updates announced by Cymatic Audio will bring additional features to the uTrack 24 such as cascading of two uTrack 24 units to create a perfectly synced 48-track system and software remote control via the RJ-45 connector. Another important new feature will be the ability to playback standard MIDI data, which can be useful for stage and show coordination.
www.cymaticaudio.com
related items