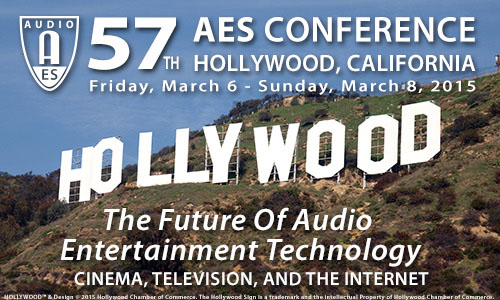 This first-ever Future of Audio Entertainment Technology Conference brings together the best in researchers, acousticians and engineers to address the current and future audio needs of the cinema, television and online entertainment industries.

As the next wave of immersive audio technologies arrive, it is incumbent on the industry to rally around an organized and focused set of standards. The three-day AES conference, led by co-chairs Brian McCarty and Dr. Sean Olive, will focus on critical issues in sound for picture, such as the need for high intelligibility for dialog, which encompasses related issues such as cinema acoustics and home-theater design.

Dr. Peter Mapp, one of the world’s leading experts on dialog intelligibility, will explain the scientific issues surrounding these topics and then lead a workshop that includes multi-OSCAR-winning sound mixer Lon Bender in an analysis of the challenges faced by the creators of sound for picture.

The conference will feature the AES’s first-ever Immersive Audio Day (Sunday, March 8), an entire conference day packed with panels, papers, workshops and demonstrations focusing on one of the most active new areas of audio technology: immersive sound.
Additionally, topics of loudness and noise-induced hearing impairment will be examined in detail, including input from medical experts.

The next topic is streaming, the new frontier for AV distribution – one where audio is already approaching a more equal footing with picture – but one with its own challenges for sound (for instance, there’s a wide range of codecs than can be used, often with inconsistent results). Loudness in streaming has become better controlled in recent years with the implementation of the CALM Act and a growing pool of technologies and products that allow for more precise measurement and management of loudness.

Frequency response in the streaming domain, though, remains less comprehensively addressed. A workshop, chaired by Roger Charlesworth of the DTV Audio Group, will tackle this issue with engineering talent from Starz Entertainment, Meridian Audio and the Telos Alliance. This day’s panels will also focus on headphones, a consumer electronics category that has seen explosive growth in the last few years. Delivery of immersive sound and binaural techniques with headphones will be demonstrated with conference partner Sennheiser Electronic.

The 57th Conference is further set to take an intensive look at immersive sound formats. Leading spatial-audio specialist Dr. Francis Rumsey will lead the day, defining the various issues and the scope of workshops to be given. These will include a session on Delivery Standards and Methods, co-sponsored by the SMPTE; Integrating Object–Based and Conventional Audio for Delivery to the Home, and the Rendering of Immersive Audio in the Home, from stakeholders including Dolby Labs, DTS-MDA, Auro-3D, Iosono, Fraunhofer, MPEG-H, and NHK 22.2.

Immersive Audio Day
Starting with the day’s presentation by Francis Rumsey entitled “Immersive Audio: Status and Challenges,” the day will delve into issues pertaining to mixing, asset management and processing for these massive multichannel formats.

Immersive Audio Day will bring together both pioneers and up-and-comers in the field to discuss immersive audio formats and how they continue to change the way we experience sound in cinema, on television, in music and online. For instance, representatives from Radio France will show and discuss how its new website, nouvOson, will broadcast 5.1 and binaural sound, utilizing a binaural technique initially chosen to reach people who do not have a home theater set for 5.1 productions.

A workshop, “Cinema Immersive Audio Delivery Standards,” co-sponsored by SMPTE and chaired by Brian Vessa of Sony Pictures Entertainment and also featuring panelists from Barco, DTS, Dolby Laboratories and Auro Technologies, will convey how standards for immersive audio are being developed.

Object-based audio, which is a key foundational element in immersive sound, will be addressed by three specialists from the University of Music and Performing Arts in Graz, Austria, through the presentation of the paper “Producing 3D Audio in Ambisonics.” The presentation will offer an overview of the current state-of-the-art in Ambisonics, including content production using Ambisonic main microphone arrays, or panning of virtual sources, spatial effects, and reproduction by loudspeakers and headphones.

Further exploration of object-based audio will continue with the presentation of “Localization of Audio Objects in Multichannel Reproduction” by the Fraunhofer Institute of Digital Media Technology IDMT in Ilmenau, Germany, which will also look into the new MPEG-H standard codec for high-efficiency coding and media delivery in heterogeneous environments.

“Next Generation Surround Decoding and Upmixing for Consumer and Professional Applications” will outline a new spatial audio algorithm that creates a channel-based three-dimensional sound scene from two or more input channels, while looking at how these new technologies will be applied to consumer and professional products for home, mobile and cinema applications.

The rest of the day is dedicated to residential applications of immersive audio, including for broadcast and webcasting. Chair Francis Rumsey will lead a panel looking at “Integrating Object-, Scene-, and Channel-Based Immersive Audio for Delivery to the Home,” followed by the workshop “How to Make Big Small—Can We Really Bring Immersive Sound to the Home?”

“Immersive Audio remains a major direction in which professional audio is headed,” stated Bob Moses, AES Executive Director. “This is the logical extension of the work that resulted in 5.1 surround sound becoming a standard for movies and television. AES’s efforts helped establish those standards, and what we accomplish on our Immersive Audio Day at the 57th International Conference will go a long way towards doing the same for immersive sound.”

At the end of the third Conference day, the delegates will be asked to develop a list of action items that will need to be addressed by the AES, and perhaps other standards bodies. The AES’s 57th International Conference intends to lay the foundation for a new generation of interoperability standards for sound for picture. These will pay off in the form of better integration and lowered distribution costs with new generations of video formats, and ultimately in a more immersive, consistent, and enjoyable experience for consumers in the cinema and in the home.

For information on the AES 57th Conference on The Future of Audio Entertainment Technology, as well as further Registration, Travel and Technical Program information, visit http://www.aes.org/conferences/57/
related items