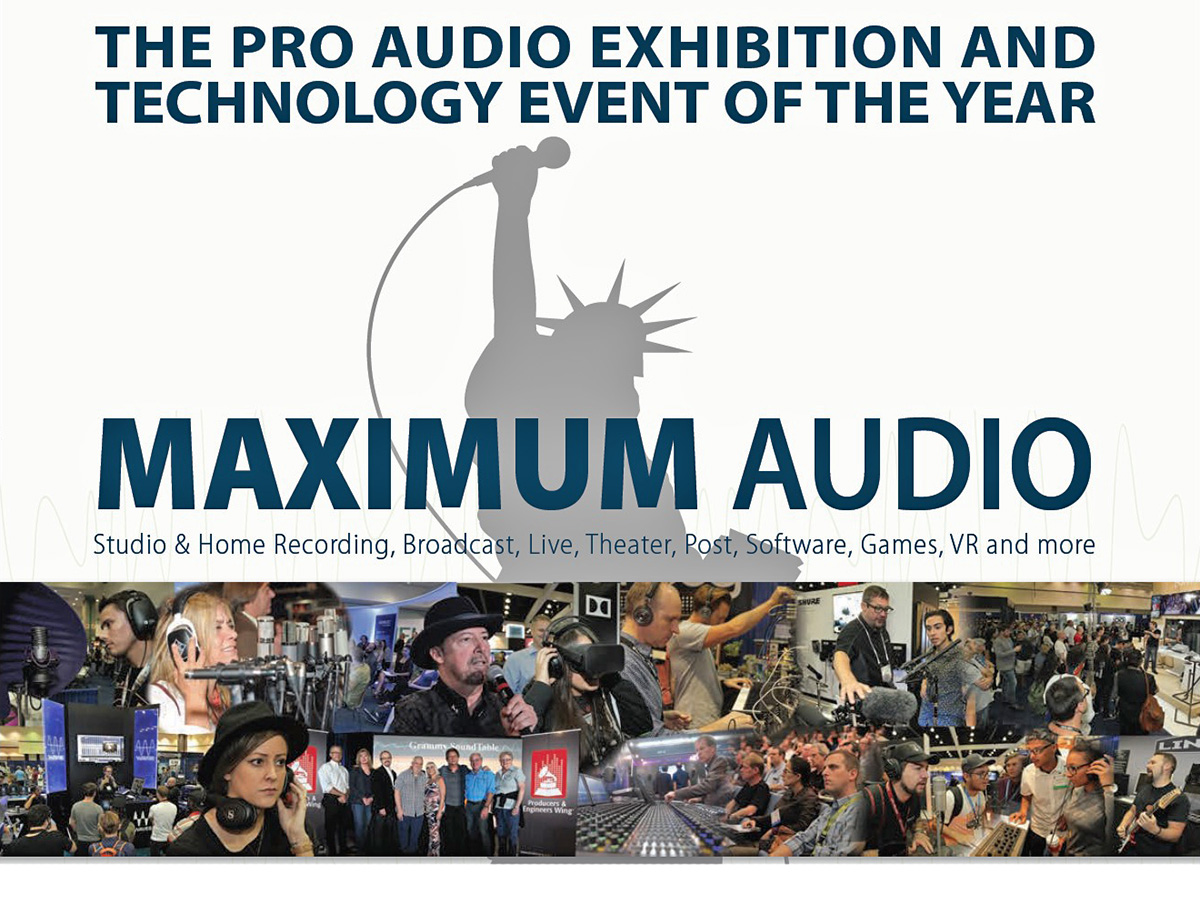 For everyone interested in Broadcast and Streaming, Networked Audio, Audio for Virtual and Augmented Reality, Game Audio, and Sound for Picture or Product Development, the 143rd Audio Engineering Society International Convention will feature an important number of conferences and sessions in the multiple  tracks.

All Access registration provides access to the entire Convention, including a comprehensive papers, workshops and tutorials program. Exhibits-Plus access allows entry to the exhibition floor and demo rooms, where leading manufacturers reveal and demonstrate the latest in audio hardware and software tools. The "Plus" includes the application-oriented sessions on the exhibit floor Expo theatres and Pavilions, along with other special events.


Immersive Audio, the Future of Cinema Sound and More
Sound is just as important as image in creating a compelling movie, TV or streaming video experience, and the 143rd International Audio Engineering Society Convention’s Audio for Cinema Track events will take a wide look – and listen – into the latest techniques for capturing and producing sound for film, broadcast and video.

“Our AES New York 2017 Convention’s Audio for Cinema Track will feature a diverse range of experts who will cover everything from nitty-gritty topics like how to best capture dialog in film and television, to the latest technologies for immersive audio and a seminar on the very future of cinema sound itself,” says Nuno Fonseca, Audio for Cinema Track Chair and professor at Polytechnic Institute of Leiria (Portugal). It’s all slated to take place at the upcoming AES New York 2017 Convention, October 18 to 21, at the Jacob Javits Center in Manhattan.

On a more down-to-earth level, “The Art and Science of Foley” will host the EMMY-winning team from Alchemy Post Sound as they talk about creating organic sounds from both a technical and artistic perspective and integrating them into the overall soundscape. In the “Dialog for Film and Television” session, top recording pros including Bobby Johanson (The Avengers, Bridge of Spies), Peter Schneider of Gotham Sound and EMMY winner Alexa Zimmerman will share their experiences in getting this most important sonic aspect right, every time.

In a session co-organized with the Cinema Audio Society, “Production Sound: Current Trends and Proven Traditions,” veteran film/video sound mixer and Trew Audio owner Glen Trew will discuss the application of new technology and techniques as well as long-established traditions for capturing production dialog and music on the set. The session content will cover choices made during mixing and tracking, including the use of boom mics vs. body mics, and music lip-sync vs. recording live.

We’ve all heard about loudness wars in music and it’s become an issue in the movies as well. “Loudness Issues in Cinema – Is the Reference Lost?” will look at the pressures on movie production professionals to print at louder levels – but what about the hitherto “sacred” reference level? This workshop, featuring experts from Dolby, the National Association of Theater Owners and Cinema Audio Society, will look at the balancing act between audiences, sound mixers, theater management and technology providers.

In “Best Practices in Re-Recording Mixing,” OSCAR winner Tom Fleischman, who has worked on more than 170 films, will show attendees how he approaches a project from beginning to end, focusing on how the audio mix can enhance the storytelling through engaging the audience’s emotions. In this session co-organized by the Cinema Audio Society (CAS), Fleischman will also discuss the evolution of technology over the last 40 years and how digital has changed the way movies are mixed.

The saying goes, “don’t try this at home,” but when it comes to sound for picture and video, not anymore! “Constructing a 5.1 Home Studio” will demonstrate that, thanks to advances in technology, freelancers and other pros can now convert that garage or extra room into a bona fide mixing stage using readily available components and economical and ingenious solutions.

Cutting-edge technology is a hot topic for many AES Convention attendees, and in “The Future of Audio for Cinema,” Kevin Collier (Warner Bros Director of Engineering), Doug Greenfield (Senior Director of Production Services, Dolby), Avi Laniado (Chief Engineer, Harbor Picture Company) and Brian Vessa (Executive Director of Audio, Sony Pictures Entertainment) will provide insight into changing technologies and how they’ll affect the future of cinema audio, along with the unresolved challenges that still need to be addressed.


Game Audio and VR Track Events
For the 143rd International Audio Engineering Society Convention, the traditional Game Audio Track is expanding into the Game Audio and VR (Virtual Reality) Track to reflect the growing importance of immersive sound and virtual reality audio. This year’s series of events, put together by co-chairs Steve Martz and Michael Kelly, incorporates the latest cutting-edge technologies and techniques used in some of today’s most popular, and growing, forms of entertainment.

“The frenetic pace of ongoing developments in Game Audio, VR, AR, and other related technologies provides the foundation for the VR and Game Audio track in the technical program at this year’s AES New York Convention,” states Track co-chair Martz. “With a common goal of presenting the latest research findings and sharing the latest production tools and techniques known to those in the industry, the AES Convention is the place to come and get a better understanding of each role in the audio production and delivery chain for game and VR content,” Martz concludes.

The new shared virtual reality action-adventure game Star Trek: Bridge Crew takes participants on a dazzling journey through uncharted areas of space, with astounding visuals, sound effects, battles and more. The “Star Trek: Bridge Crew VR Audio Post Mortem” session will feature Justin Drust of developer Red Storm Entertainment and his team as they discuss the contributions from the audio director, audio programmer and others in bringing this fantastic game to market from conception to completion.

“The ‘Horrific’ Sound of Resident Evil 7: Biohazard” will take an in-depth look at the latest installment of the smash hit videogame series. Sound Designer Ken Usami and others from Capcom will talk about their methods in creating realistic high-fidelity sound, including their use of “musique concrète” – music constructed by mixing recorded sounds to create a wide variety of textures, tones and noises to deliver an uncomfortable and disturbing sonic environment.

Video games are a worldwide phenomenon, as evidenced by the seminar “Gateways to the East: Music and Recording for Chinese Video Games.” Fei Yu, music supervisor for the NetEase multiplayer online game Revelation Online, will discuss the challenges of working with collaborators around the world, and the creative and technical processes of working with ethnic soloists and orchestras to create authentic world-music sounds. The Revelation soundtrack has won the BSOSpirit Jerry Goldsmith Award and the Tracksounds Genius Choice Vote for Best Score: Video Game.

What does the aspiring VR audio professional need to know in order to excel in this new field, and how is higher education responding to the current skills gap? “Immersive Audio and VR/AR: A Traveler’s Guide to the Growing Landscape of Experiential Audio” will address these topics and more in a session led by Josh Antonuccio, lecturer at the School of Media Arts and Studies at Ohio University and co-creator of the Immersive Media Initiative, and Richard Warp, founder of music production company Intonic. A related panel, “State of the Art: Kickstart Your Career in Audio for Games, VR and Beyond” will discuss how to succeed in this field via the deep expertise and experiences shared by industry pros.

With the new XBOX One and Windows’ addition of native platform-level support for spatial sound, games and other applications can now implement audio above, below and around the listener, as well as transparently render to multiple endpoints (speakers, headphones) and formats (Dolby Atmos, Windows Sonic for Headphones). This functionality opens up new technical and creative possibilities for game designers, as addressed in the talk “Spatial Sound for Console and PC Games,” hosted by Microsoft’s Robert Ridihalgh, Scott Selfon, and Mark Yeend, exploring a multitude of impactful and common use examples in this burgeoning field.


Spatial Audio Track
The state of the art in audio is ever-expanding – literally, as evidenced by the stunning advances in 3D audio and immersive sound that attendees of the 143rd International Audio Engineering Society Convention will be able to experience at its wide variety of Spatial Audio Track events.

“3D audio, with its ability to reproduce height as well as width and depth, enables music listeners, moviegoers, TV viewers and gamers to experience never-before-possible levels of sonic involvement – and excitement!” said Michael Kelly, 143rd AES Spatial Audio Track Co-Chair along with Steve Martz. “Our expert presenters will be digging deep into the technologies involved in creating immersive audio and show people how they can stay ahead of the curve in this rapidly evolving professional audio segment.”

If the proliferation of all the new 3D audio formats seems daunting, have no fear: the “Crash Course in 3D Audio” seminar will explain the latest 3D audio concepts, formats and technologies, from Dolby Atmos to channel-based audio, from binaural to Auro 3D and more.

Oculus Research has been on the cutting edge of virtual reality technology since its inception. In “Perceptual Thresholds of Spatial Audio Latency for Dynamic Virtual Auditory Environments,” the company’s Ravish Mehra will address one of the key factors in maintaining the VR illusion: when the listener moves, updated audio information has to be delivered to his or her ears and the technology for doing this is far from simple. Mehra will explain Oculus’ latest techniques for minimizing spatial audio latency (SAL) in creating more believable virtual audio environments.

How can home listeners best experience 3D audio? “Spatial Audio – Practical Immersive Audio at Home” will answer this question by looking at everything from channel-based home entertainment systems to different types of soundbars, multi-room wireless speakers, up-firing speakers and even ad-hoc arrays of mobile phones!

In “The State of the Art of Binaural Audio for Loudspeakers and Headphones,” Edgar Choueiri, Professor and Director of the 3D Audio and Applied Acoustics Lab, Princeton University – who will also deliver the Keynote Speech during the AES New York Opening Ceremonies – will describe the challenges of binaural audio through headphones (BAH) and loudspeakers (BAL), recent solutions to these challenges, and the state of the art of binaural processing and content development tools, with a focus on BACCH 3D Sound processing. Further discussion and demonstrations will address BACCH-HP headphones processing, BACCH-dSP software and more. 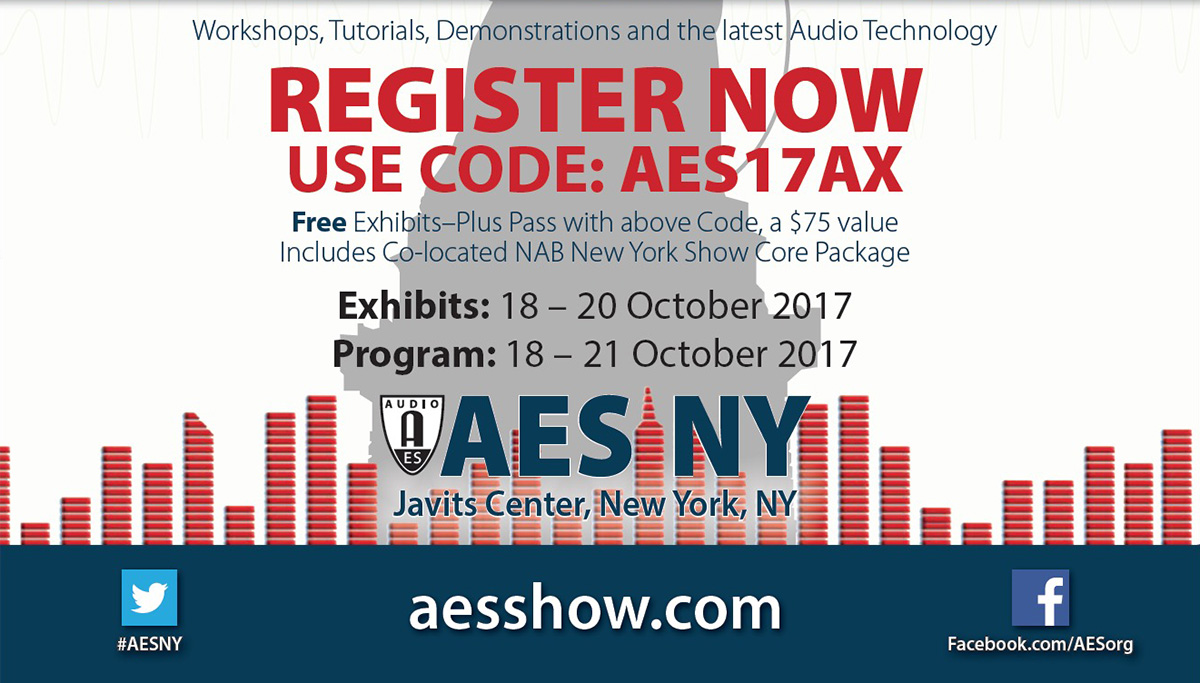 Additional Spatial Audio Track events will include sessions on the similarities and differences between stereo and spatial audio production; producing, performing and publishing music in 3D in a variety of genres; a binaural audio listening session; and much more.
aesshow.com

Global Professional AV Industry Will Decline in 2020; Growth to Resume in 2021