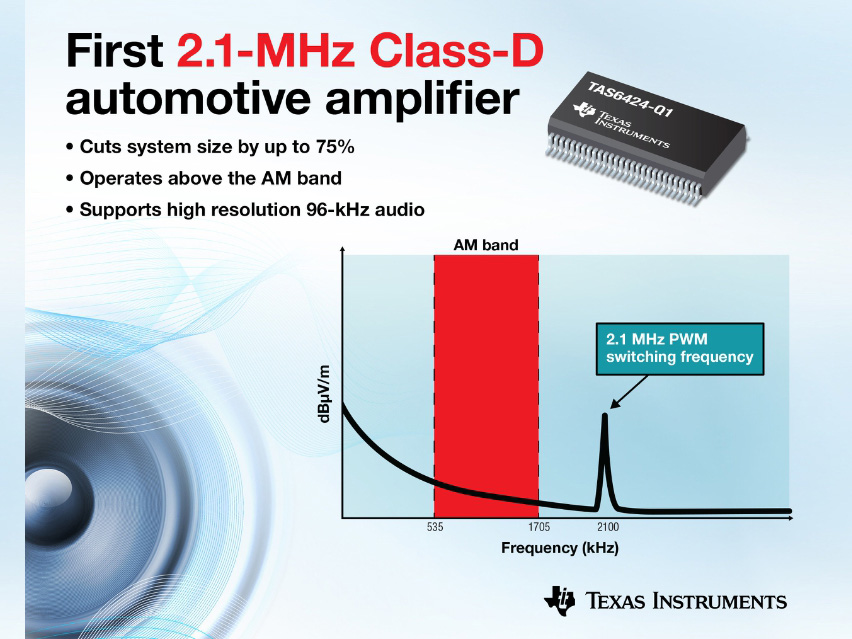 The new TI TAS6424-Q1 enables the use of smaller external filters and eliminates up to 18 external components to reduce system size and cost compared to existing Class-D solutions. With a maximum output power of 75 W per channel, the device features the industry’s highest switching rate and is the only audio amplifier that switches above the AM band. This eliminates the need for complex avoidance schemes and eases electromagnetic compatibility (EMC) designs while enabling the system to meet Comité International Spécial des Perturbations Radioélectriques (CISPR) 25 Class 5 EMC requirements.

Other key features of the TAS6424-Q1 Class-D audio amplifier include low impedance support, maintaining stable audio playback while driving loads of 2 ohms, and advanced AC load diagnostics and line driver mode with detailed on-chip phase and impedance measurements that designers can use to configure the device with various outputs, such as woofer, tweeter and line-level connections. The device also improves distortion, power-supply rejection and dynamic response with high-frequency switching.

The TAS6424-Q1 is targeted primarily for automotive applications such as head units and external amplifiers, and TI determined from discussions with customers that 96 kHz sampling rate provides an optimal listening experience for most applications and content in this space. For applications which require higher sampling rates, TI offers DACs and other class-D amplifiers in the existing portfolio that support up to 192kHz. 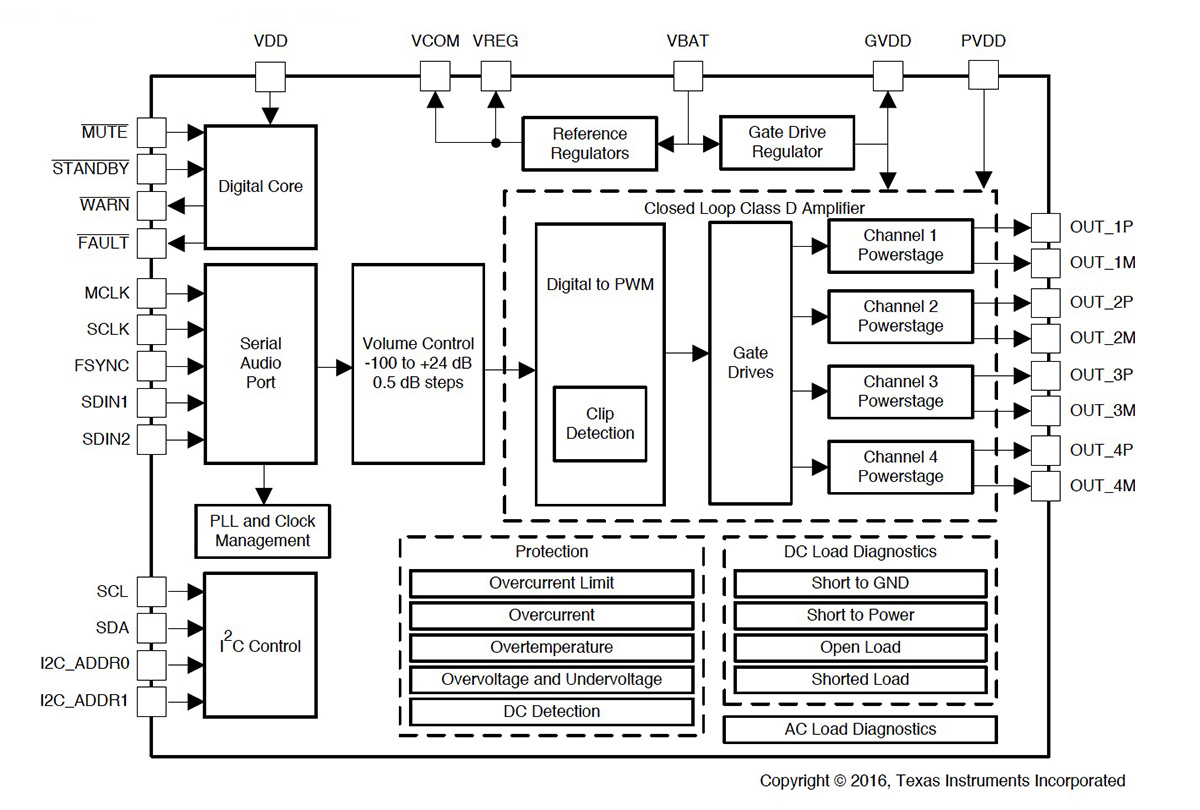 TAS6424-Q1 Insights
We discussed this new Class D design with Gregg Burke, Product Marketing for Texas Instruments, to better understand how this new design compares to TI’s previous generations. According to Burke, the 2.1 MHz pulse width modulated (PWM) switching frequency brings significant benefit to automotive applications (head units & external amplifiers) which are quite sensitive to EMI. “In the US, AM radio stations broadcast in the frequency band from 535 kHz to 1705 kHz. The below graphic (see Figure 1) shows the output spectrum of the TAS6424-Q1 automotive Class-D amplifier switching at 2.1 MHz (or 2100 kHz). In the case of the TAS6424-Q1 device, you can see the fundamental switching frequency is approximately 400 kHz above the AM band. This means the TAS6424-Q1 provides significant margin to the AM band. This design is also free of any lower-frequency spikes that would interfere in the AM band.
“The TAS6424-Q1 also has an inherent advantage by minimizing potentially interfering signals (harmonics) in the AM band. However, looking at Class-D designs in the industry that switch at frequencies below the TAS6424-Q1 (say 400 kHz as an example), we can see in the second graphic below (see Figure 2) that these designs will create harmonics that lay directly within the AM band. These harmonics then create interfering signals that reduce the sensitivity of the AM receiver, thereby hindering the AM radio station’s reception. This means that some type of EMI avoidance scheme must be implemented on existing Class-D amplifiers to mitigate the effects of these harmonics,” Burke added .
“The higher PWM switching frequency also provides increased bandwidth for the amplifier control loop which results in improved distortion, power-supply rejection and dynamic response,” he continues.

When asked to further elaborate on the AC diagnostics functionality, Gregg Burke explains that TI has been consulting with the company’s automotive customers as they have requested to go beyond simple AC load detection capabilities that merely determine if speakers are wired properly on the assembly line. “In the TAS6424-Q1 design we have greatly enhanced the resolution of the impedance measurement and we provide phase data, both on a per-channel basis. The combination of these two measurements affords our customers much greater flexibility in the types of multi-driver speaker networks that can be detected, even with crossovers in place, both on the assembly line and during debugging of system-level audio issues,” he explains.

audioXpress also learned that the TAS6424 is trimmed at the factory for the lowest DC offset, avoiding undesired “pop and click” effects during various transitions (such as start, stop, mute, unmute). In the TAS6424-Q1 datasheet, TI also provides recommended power sequences to provide the lowest pop and click.

The PurePath Console graphical user interface is available to help designers easily configure the TAS6424-Q1. To simulate and optimize the device, designers can download an IBIS model or request a TAS6424-Q1 evaluation module.

The TAS6424-Q1 is available now in a PowerPAD thermally enhanced shrink small-outline package (HSSOP) from the TI store and authorized distributors. Pricing is US$5.97 in 1,000-unit quantities.
www.ti.com/tas6424q1-pr