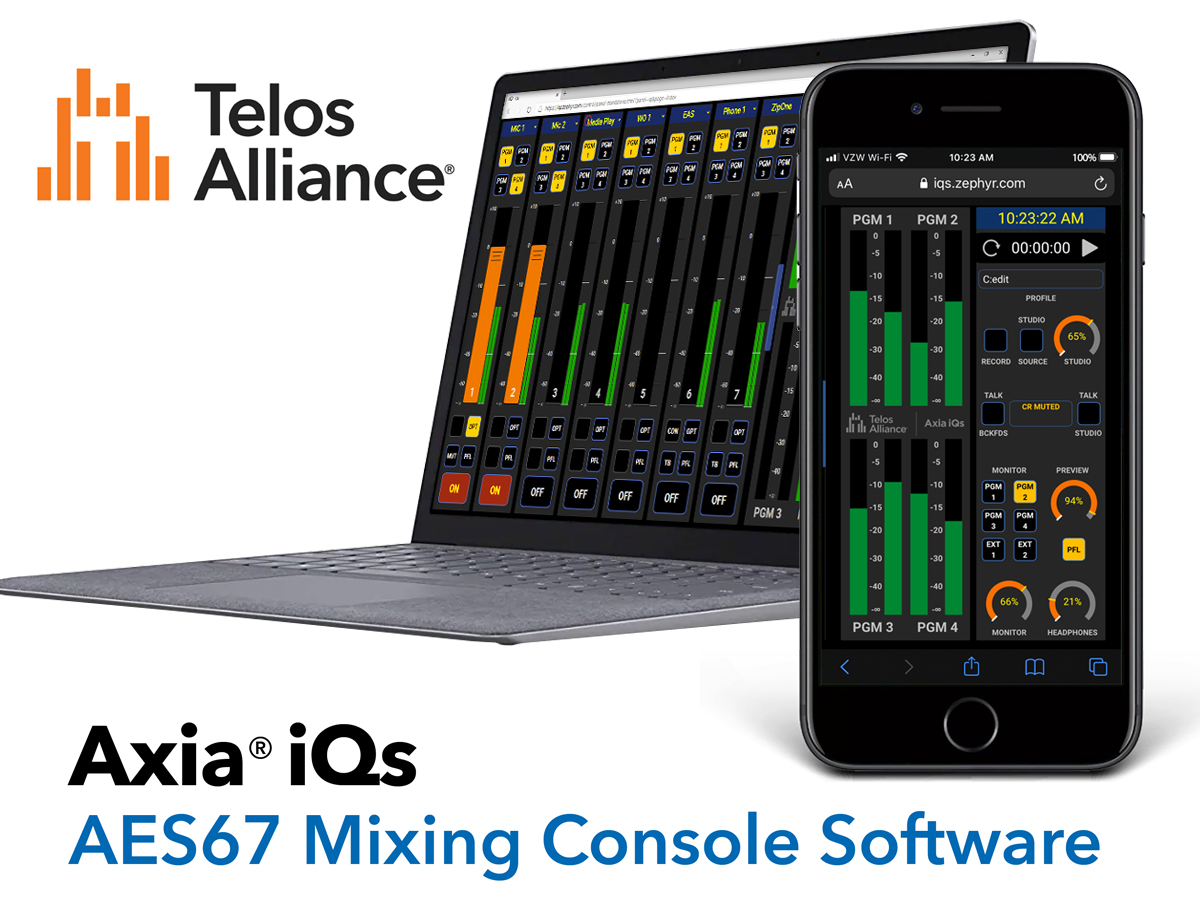 The Axia iQs AES67 Mixing Console Software works exactly like a physical surface and supports touch-screen devices, being ideal for distributed and remote teams, temporary studio, studios lacking physical space, or simply to connect multiple users working in collaboration on a single mix. The HTML-5 interface is in fact more flexible than its physical counterparts, starting with a base iQs 4-fader software module and growing in increments of 4 faders (instead of 6 or 8), up to 24 faders. Like all products from Telos Alliance, it supports AES67 and SMPTE 2110-30 audio-over-IP standards, working with any AES67,
Livewire+ AES67, or Livewire source.

Axia iQs can be deployed in two ways — based on Telos Alliance’s AE-1000 server or a Docker container — to suit the organization’s needs and comfort level. The mixing console software gives broadcasters and presenters all the benefits of cloud deployment with the familiarity of the devices they use every day. If their device has a web browser, the broadcaster can control a mix with iQs. This opens up remote work possibilities, eliminating the cumbersome workflows required to remotely access a mixing console in other ways while making it easy for anyone, from the most seasoned radio engineer to the newbie, to use.

"It’s a brave new broadcast world where production can happen anywhere and at any time. iQs software runs on roads built by industries much larger than our own and gives broadcasters flexible options for deployment, including our new AE-1000 server and Docker container,” says Marty Sacks, Executive VP of Sales, Support, and Marketing for Telos Alliance. “All while giving you total control with a simple web browser, allowing broadcast engineers to ‘Studio Anywhere.’”

The Axia iQs console software allows users to run multiple instances of software concurrently, allowing organizations to scale up for demanding production requirements and scale back down accordingly, only paying for what they need. With virtual software and cloud computing tested, tried, and true, in the case of failure, users can instantly switch to their software instance on a backup, for example.

With this software, organizations can also plan their activities based on the most current hardware available off-the-shelf, not having to rely on proprietary hardware. The virtual broadcast studio is customizable because functionality is not hard-coded to a specific physical attribute on a piece of hardware, like a physical surface.

The Axia iQs AES67 Mixing Console Software is just one piece of Telos Alliance’s visions, with the company working to build inclusive virtual platforms in collaboration with valued partners like Dolby, Fraunhofer, Nautel, and others. Livewire+AES67 is an AoIP protocol that not only enables high-reliability, low-latency uncompressed digital audio over Ethernet, but crucially, it incorporates logic, control, and program associated data (PAD) abilities. Since no signal routing solution is useful unless users can control and manage the system effectively, the Telos Alliance Pathfinder Broadcast Controller/VM unlocks the true potential of the whole ecosystem, by discovering and identifying all compatible devices connected to the system. Acting as a middleware layer using its onboard protocol translator to connect with many commonly used third-party controllers, it effectively serves as an AoIP router. 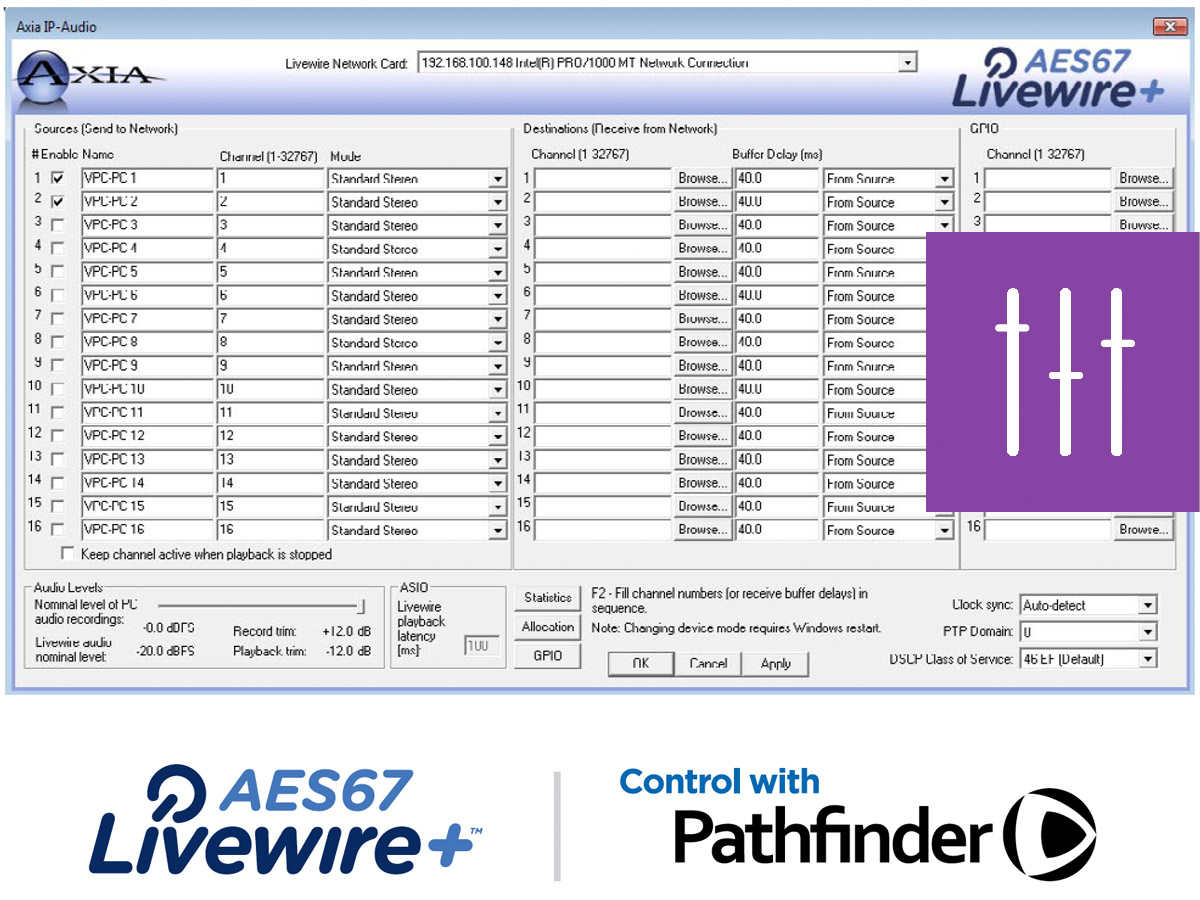 Telos Alliance also offers its Axia fully AES67-compliant IP audio driver, allowing any PC/Windows computer to send and record up to 24 channels of stereo PC audio directly to/from Axia networks via Ethernet — no sound cards required. A GPIO function conveys “button-press” data from the network to destination applications, and single and four stream versions are available to emulate standard sound cards with inputs and outputs appearing in the Windows Control Panel. Multichannel OEM versions are even able to emulate 8 or 24 stereo channel sound cards and there is even support for 5.1 surround audio streams.