The Studio Technologies Model 5518 allows users to connect eight analog microphone or line-level sources and then output the signals in the ST 2110 Ethernet digital domain. In addition, eight audio channels that arrive via ST 2110 are converted to analog and output as line-level signals. The new Model 5512 supports analog live-level inputs and outputs and is available in two versions – one with eight input and eight output channels, and the other with 16 input and 16 output channels. Both the Model 5512 and Model 5518 interfaces support redundant stream performance using two Ethernet interfaces following the ST 2022-7 standard.

“Evolving standards and interoperability are major talking points across all of pro audio,” says Gordon Kapes, president of Studio Technologies. “For audio signals within the broadcast environment, we see ST 2110-30 as having great potential. In response, we created two new audio interfaces that can be directly integrated into ST 2110-compliant workflows."

The Model 5512’s analog inputs and outputs use 25-pin D-subminiature connectors for easy interfacing with balanced and unbalanced sources and destinations. With the Model 5518, the unit’s eight mic/line audio inputs are located on the front panel and use standard three-pin female XLR connectors. These analog audio input signals are converted to 24-bit PCM digital and then transported via the AoE network interfaces. Each unit is housed in a compact, lightweight enclosure, which mounts in one space (“1U”) of a standard 19-inch rack. Power can be provided by 100-240 volts, 50/60Hz or 12 volts DC with redundant operation supported.

Both the Model 5512 and Model 5518 include three Gigabit Ethernet network interfaces, two to support ST 2110-30 essence stream transport and the third for accessing the management menu system. An internal web server allows fast and flexible monitoring and configuration of many of the units’ audio and network parameters. In addition, front-panel indicators, a display, and pushbutton switches provide users with direct access to key configuration selections.

“Our latest audio interfaces offer the audio quality, features and reliability required by 24-hour on-air and related broadcast applications,” adds Gordon Kapes. “Creating products that are compliant with the ST 2110 suite of standards was a natural step for us, helping our customers in their transition to all-IP infrastructures. These interfaces are designed to integrate seamlessly into applications that can benefit from '2110.'” 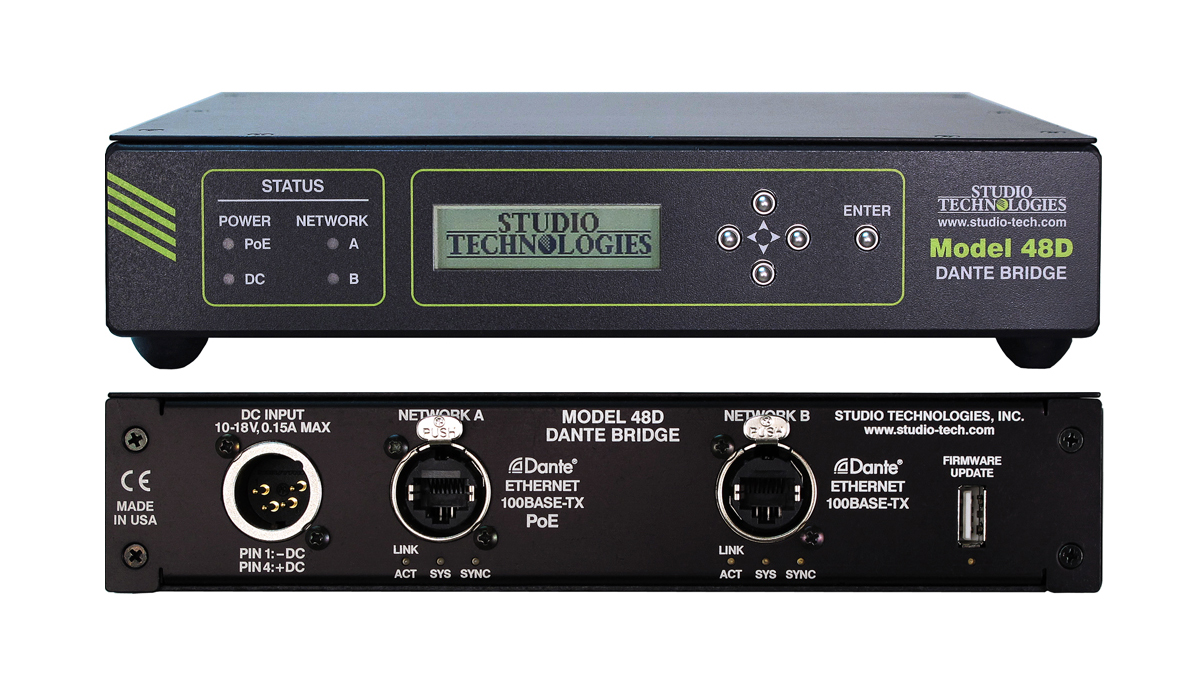 “Dante has found wide acceptance as a network ‘backbone,’ and the Model 48D was developed to provide a purpose-build solution for a common connectivity issue,” explains Gordon Kapes. “There’s really no simpler means of interconnecting two separate Dante networks than with the Model 48D. The unit addresses the audio performance, ease-of-use, and network security requirements of both permanent and mobile applications.”

The Model 48D provides four Dante input (receiver) and four Dante output (transmitter) channels that support audio signals with sample rates of 44.1, 48, 88.2, or 96 kHz, and bit depths of up to 24. Four audio channels in each direction can pass between the Model 48D’s two independent local area network interfaces when used with sample rates of 44.1 or 48 kHz. Two channels are supported when the sample rate is 88.2 or 96 kHz. Sophisticated sample-rate-conversion (SRC) integrated circuits ensure high-quality interchange of digital audio information.

The Model 48D is housed in a lightweight “1/2-rack” enclosure with its operating power obtained from either a Power-over-Ethernet (PoE) network connection or an external source of 12 volts DC. Optional rack-mounting kits allow one or two units to be mounted in 1U of a standard 19-inch rack enclosure. Key user features can be easily configured using the Dante Controller software application. In addition, the Model 48D is equipped with front panel LED indicators, an LCD display, and five push button switches to allow viewing and revising of selected operating parameters.

In addition to the Model 48D, 5512 and 5518, Studio Technologies is now working on two new Dante-compatible interfaces, the 5412 Audio Interface and 5418 Mic/Line Interface.