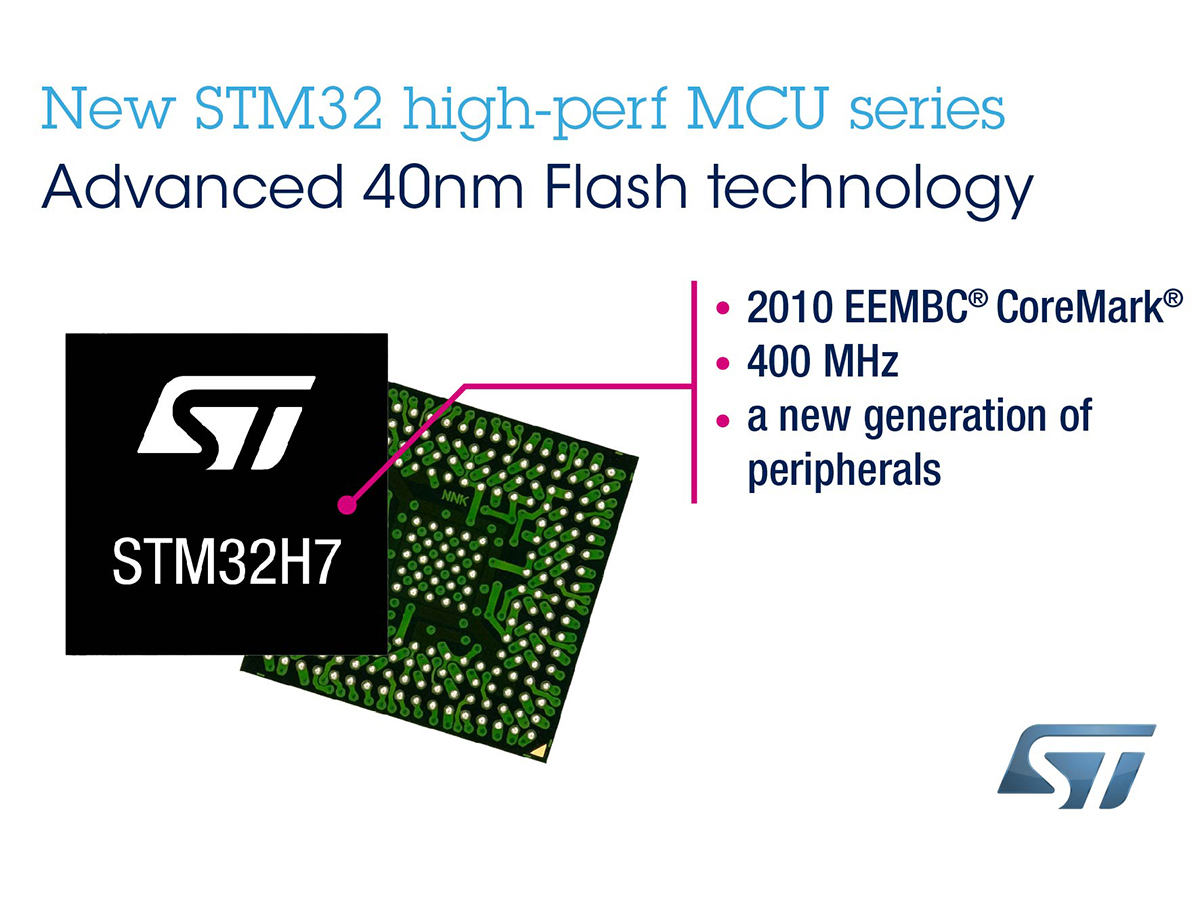 Central to this leap in capability is ST’s own highly advanced 40nm chip-fabrication process combined with innovations in the product architecture, unleashing the performance of the core and enabling ultra-fast data transfers through the system while consuming less than 280uA/MHz in run mode and less than 7uA in stand-by.

The first device in the new series is the STM32H743, which features the ARM Cortex-M7 core running at 400MHz. This MCU is the highest-performing implementation of ARM’s highest-performing Cortex-M core currently in the market. The STM32H7 microcontrollers are perfect for industrial gateways, home automation, telecom equipment and smart consumer products, as well as high-performance motor controls, domestic appliances, and small devices with rich user interfaces. Integrated state-of-the-art security features, including cryptographic accelerators and provision for secure-key storage, provide connected objects with a high level of protection against online threats both during the manufacturing and in the field; perfect for Internet of Things (IoT) appliances.

“The diversity of IoT and embedded applications demands scalable MCU solutions,” says James McNiven, general manager for CPU and media processing groups, ARM. “The advanced capabilities of the H7 series will enable developers to address the high end of the embedded market while delivering all of the efficiency and ease-of-use benefits of an ARM Cortex-M based device. With the ARM mbed OS technology supported on the Cortex-M7, developers can have easy access to advanced software stacks for fast development.”

The STM32H7 series features the ARM Cortex-M7 core that also powers the STM32F7 series. The new STM32H7 series is the industry’s first Cortex-M7 fabricated on the advanced 40nm Flash process and the first to run at 400MHz. These important enhancements enable the STM32H743 to set new performance records of 856DMIPS and an EEMBC CoreMark score of 2010. 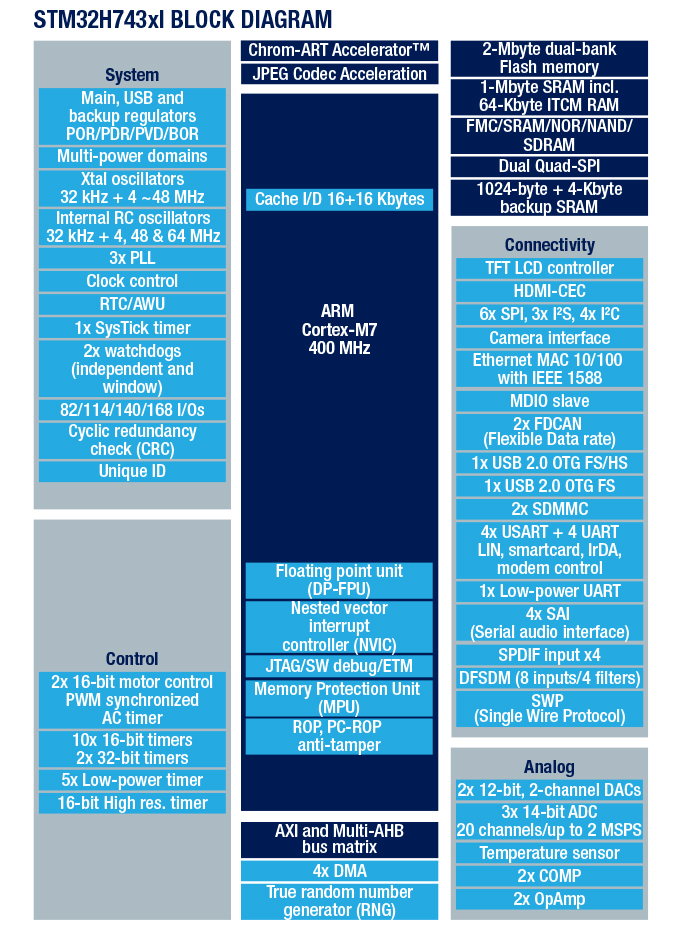 ST’s 40nm geometry is a key factor enabling the leap in memory density, as it allows the STM32H743 to integrate 2MB of dual-bank Flash with a huge 1MB SRAM that frees developers from the resource constraints that typically complicate high-end embedded development. The STM32H743 interacts efficiently with either internal or external memory, thanks to its unique L1 cache and TCM memory. These freedoms allow applications to become more sophisticated and feature-rich, while also saving the engineering time and effort traditionally needed to implement the specified functionality within extremely limited resources.

With the launch of the STM32H7 series, ST is also introducing a new generation of STM32 on-chip peripheral functions. The first device in the new series, the STM32H743, draws on a pool of 35 communication peripherals that support advanced protocols and standards such as CAN FD, SDCARD (4.1), SDIO (4.0), and MMC (5.0). There are also 11 enhanced analog functions including low-power 14-bit ADCs running at up to 2Msample/s, 12-bit DACs and op-amps, as well as 22 timers, which include a high-resolution timer running at 400MHz.

As well as dramatically increasing the performance and resources, the STM32H7 MCU series also incorporates STM32 Dynamic Efficiency energy-saving techniques that help the new devices consume half the dynamic power of their predecessors in the STM32F7 series. Central to this leap in energy efficiency is ST’s own highly advanced 40nm chip-fabrication process that, in combination with innovations in the company’s Dynamic Efficiency technologies, allows precise optimization of power consumption. These optimizations include Dynamic Voltage Scaling that adjusts power consumption according to performance demands, and Batch-Acquisition Mode that captures data directly into memory without waking the core from energy-saving mode. ST has also created multiple memory domains that support Dynamic Efficiency energy management. D1, D2, and D3 domains are dedicated respectively to processing-intensive tasks and peripherals interconnected through a high-performance AXI bus matrix (D1 domain) as well as connectivity tasks (D2 domain), and the energy-saving Batch Acquisition Mode (D3 domain). Each domain can be powered on or off independently to maximize energy savings, and can be reactivated by programmable events.

While making the updated peripherals available, ST is maintaining the proven convenience of complete pin, peripheral, and software compatibility among microcontrollers throughout the STM32F4 and F7 product series. This cross-compatibility greatly simplifies scaling of applications and leveraging design expertise and proven code across multiple projects.

Design enablement is already well developed for ST’s Cortex-M7 microcontrollers, the STM32F7 series. Evaluation boards, Nucleo kits and Discovery kits will all be offered for the STM32H7 series, along with STM32Cube embedded software, and will be supported by ARM mbed OS to take advantage of advanced software stacks available to all developers.

Six packages ranging from LQFP100 to TFBGA240 are sampling now.
The STM32H743 and further STM32H7 product lines will be in full production in Q2 2017.
www.st.com/stm32h7
related items