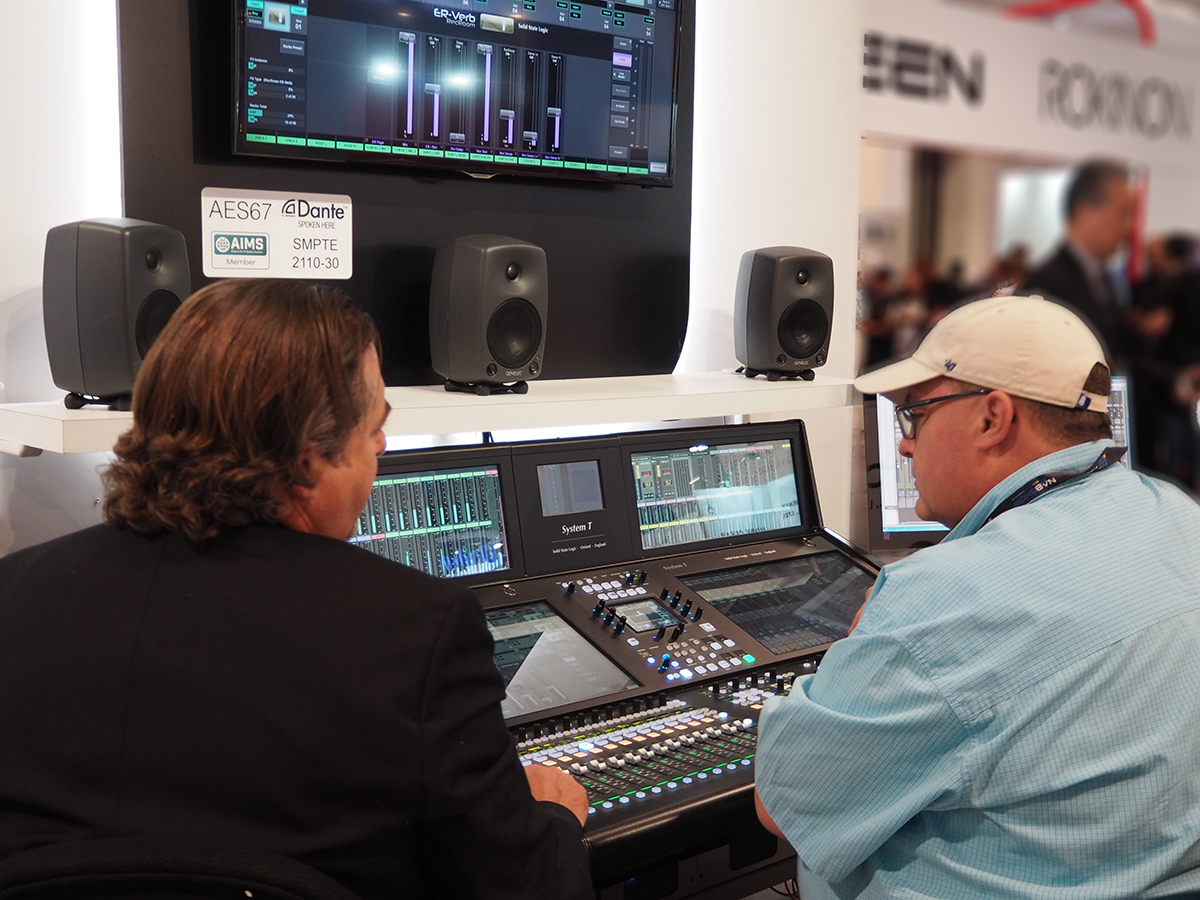 With a collection of high profile installations around the world already operational, SSL's System T is proving the benefits of IP-based production workflow. At NAB 2018 SSL showcased the new System T v2.0 software release introducing major additions, including immersive audio, 'appified' software, and DAW control. This, apart from the global premiere of the 32-channel version of the S300 compact broadcast console.

SSL’s immersive audio implementation for System T places support of immersive audio for ATSC 3.0, Dolby Atmos, and MPEG-H at the heart of the console architecture. With the emergence of 3D Immersive Audio in broadcast as well as in film, SSL’s new 3-axis co-ordinate panning for System T incorporates 2- or 4-channel overhead speakers into the available channel and bus formats. As well as positioning mono and stereo sources in a 3D sound field, System T can accept multichannel 3D sources and fine tune their spatial components as they are added to the final production mix. This is essential in multilingual sports productions where effects and ambience multichannel 3D ‘beds’ will be used extensively as the basis of the individual program mixes.

Supported formats include 5.1.2 and 5.1.4, 7.1.2 and 7.1.4 (with side channels as well as rear channels). A novel 4.0.4 format designed primarily for beds and stems ensures that the centre channel remains exclusively available for dialogue and commentary. The 4.0.4 format is also ideal for the output of the new generation of VR mics that capture a 4-channel ambisonics scene representation. This can then be rendered in a multichannel format for incorporation into an ‘object/bed’ based immersive mix.
Intelligent downmixing means that conventional 5.1, stereo, and mono mixes can be created simply by routing a 3D channel or stem to a suitably formatted master bus. Downmix coefficient control of the overhead (top) to floor (bottom) mix and the side channels to front and rear, permits user adjustment of the system derived defaults. An elegant unified approach to divergence processing eliminates the complexity often found in the panning solutions offered on workstations and other digital consoles, which require multiple parameters to determine the balance between the discrete and phantom components of the center and side channel signals.

Partnering the new 3D channel and bus formats is a 12-channel monitoring section. This includes 49 12-channel monitor inputs, configured as a primary monitor input and two 24-channel preselectors, together with a 12-channel AFL monitor bus, and a pair of 12-channel insert points for external processing and rendering engine returns, offering all the monitoring tools required in a 3D production environment. An additional secondary main monitor output allows use of both conventional monitor speakers as well as a secondary sound bar or other domestic style monitor setup for real-world quality checking. A further two stereo Alt outputs can be used for nearfield monitors or for simultaneous secondary program monitoring in multi-language productions. Independent channel level and delay adjustment is available for both main monitor outputs.

SSL has also applied its extensive experience of DAW Control to the creation of the company calls the "most comprehensive DAW Control available in a broadcast console." The system makes full use of System T touchscreen and hardware controls and includes a dedicated screen interface for control over the DAW mixer environment and transport controls.
www.solidstatelogic.com
related items