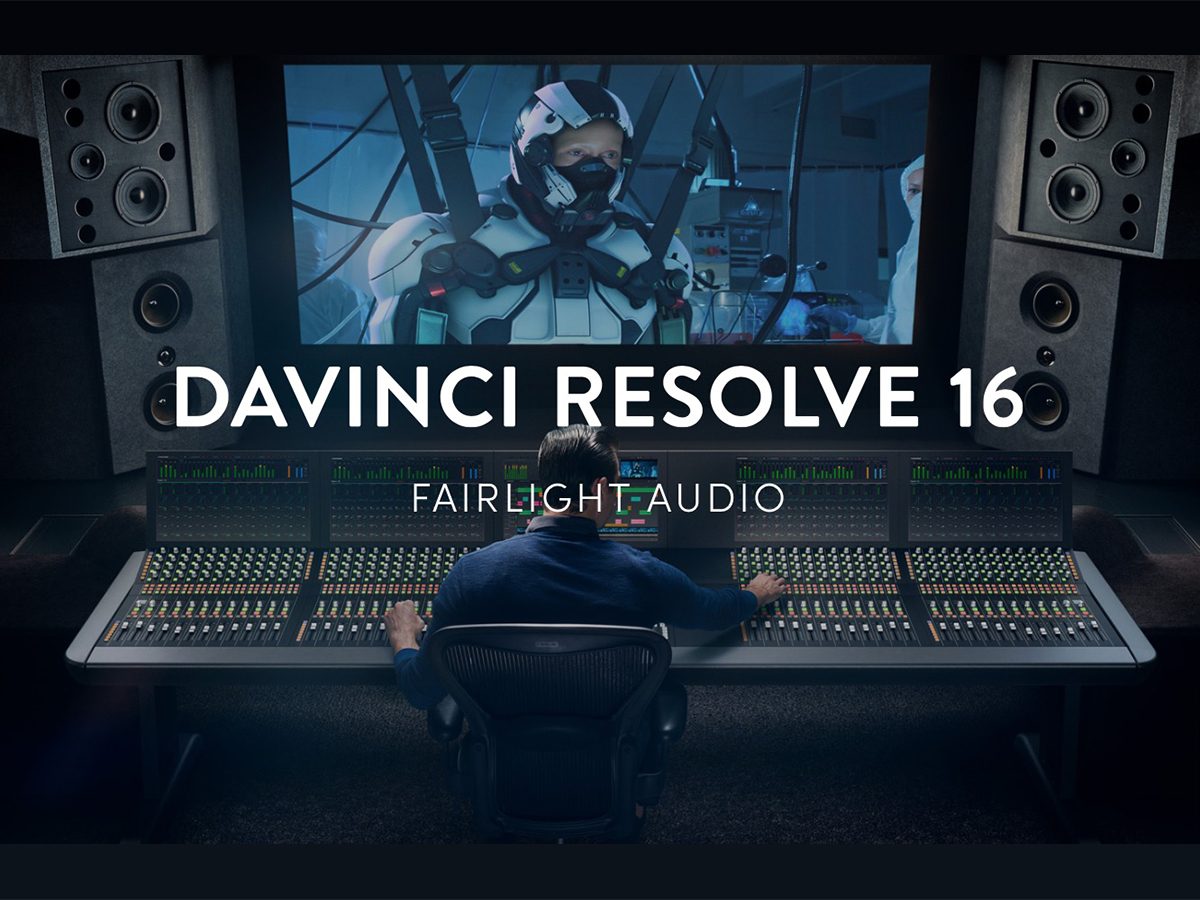 As Blackmagic Design always does, during the first hour before the opening of another NAB Show, Grant Petty, the company's founder, CEO and product visionary, unveils a series of new products and updates that are certain to steal the show, excite thousands of professionals all over the world, and completely kill the momentum for most of the other major brands' announcements at the Las Vegas annual gathering.

Among the many wonders at NAB 2019, Blackmagic once again demonstrated how software can quickly evolve and adapt to the needs of the market, not costing a fortune and still supporting all major computer operating systems, with simultaneous releases on macOS, Windows, and Linux, something that no other company does. Since Grant Petty is himself an editor and a user of the software, he knows better than anyone else what the market expects, where others products fail or lag, and what he envisions for the system. And that's quite remarkable!

The new DaVinci Resolve 16 now includes a revolutionary new cut page designed for editors that need to work quickly on projects like television commercials. Sitting alongside the software preexisting edit page, the cut page offers a whole new, simpler way of editing with an innovative interface, that eliminates inefficiencies through features like a dual timeline, so users never have to zoom in or out on cuts again. DaVinci Resolve 16 also introduces a new Neural Engine for AI and deep learning features such as enhanced face detection, as well as a quick export function to upload directly to YouTube and Vimeo from anywhere in the application, a massively updated audio "Fairlight" page, and all-new ResolveFX plugins.

And the new software is complemented with a raft of new hardware products, including the new DaVinci Resolve Editor Keyboard, a premium, all-metal, USB-C keyboard with integrated search dial to help professional editors work faster without the need for a mouse. It will be available in August 2019 for $995. Also new and notable is the Teranex Mini SDI to HDMI 8K HDR, an advanced 8K HDMI monitoring solution with dual on screen scope overlays, HDR, 33 point 3D LUTs and monitor calibration for professional, color accurate SDI monitoring on HDMI 8K screens. Available in May 2019 for $1,295.

And Blackmagic completely humiliated all other major broadcast manufacturers with the introduction of the HyperDeck Extreme 8K HDR ($4,995),a VTR-style recorder with native 8K HDR and H.265 support, allowing to record over 8 hours of 8K footage on a single 1TB CFast disk. This is complemented with the new ATEM Constellation 8K live production switcher, with 4 M/Es, 40 x 12G-SDI inputs, 24 x 12G-SDI outputs, 4 DVEs, 16 Keyers, 4 media players, 4 multi viewers, 2 SuperSource and standards conversion on every SDI input, available now for $9,995.

The ATEM Constellation 8K - a complete compact 2RU rack mount design with a built in control panel and a large LCD (pictured above) also features balanced audio, Ethernet, RS-422 control and MADI digital audio extra inputs to the internal Fairlight audio mixer. This built in audio mixer makes it possible to do extremely complex live sound mixing and features a massive 156 channels. 80 mixer channels are de-embedded from the SDI inputs, while an extra 64 audio channels are input via MADI in. Each input channel features the 6 band parametric EQ and compressor, limiter, expander and noise gate as well as full panning. And the solution even offers extra channels for the analog input, talkback microphone and media players. All this audio power can be controlled via the ATEM Software Control, a Mackie compatible panel or Fairlight Audio Console.

And that's just a small sample of the many products Blackmagic announced, which also include cameras and everything needed for all types of modern media production.

The new Resolve 16 Audio Page
Detailing a little more about the new audio features of the announced DaVinci Resolve 16 software update, Blackmagic now offers a more mature solution that is able to compete directly with every major audio editing solutions. Obviously, the largest advantage is the deep integration between the video, color correction and effects pages of Resolve 16, not mentioning the integration of media asset management and collaboration features with other solutions, such as Frame.io.

Even on the new Cut and Edit pages, users will notice that most audio for video, ADR, dynamic processing, level adjustment, metering, GPU accelerated scopes, etc., are all available and already offer one of the best workflows ever available for any type of production. When switching to the dedicated "Fairlight" audio page, users will notice the new elastic wave alignment that allows users to stretch waveforms to precisely sync dialog replacement with video. As always, Blackmagic makes this sophisticated feature look simple and easy to use, offering a new intuitive way to closely align audio clips and retime audio to picture with great quality and all without changing pitch.

Also important is the way users are now able to open the bus tracks in the timeline along with regular tracks, making it easy to view and edit all kinds of automation parameters. And for no additional cost, Resolve 16 now offers support for loudness monitoring standards such as ATSC, ITU 1770 and EBU R128, providing users with all the technical monitoring options. And the new FairlightFX include plugins such as frequency analyzer, limiter, phase meter, dialog processor and a new foley sampler. Users are able to download 500 royalty free foley sounds directly from Blackmagic Design to use with the new foley sampler.

Immersive 3D Audio
Bt probably the most important update that Blackmagic unveiled in the new DaVinci Resolve, has to do with the ability to mix and master projects in immersive 3D audio formats such as Dolby Atmos, Auro 3‑D, MPEG-H, SMPTE ST 2098 and a new 26 channel super bus. Fairlight was already a leader in immersive audio production tools even before the acquisition by Blackmagic. Now, the company is evolving the complete software environment to deal with immersive audio and object-based production, either working directly on the software or with the support of the much improved Fairlight dedicated audio hardware consoles.

Also unveiled at NAB 2019, Blackmagic is working with Fraunhofer IIS in order to allow the DaVinci Resolve 16 software to mix and encode MPEG-H audio. The collaboration enables MPEG-H editing and authoring tools (https://www.iis.fraunhofer.de/mpeg-h) directly in the Fairlight audio subsystem of Resolve 16 with a preview of the technology at the Fraunhofer and Blackmagic Design booths using an astonishing Fairlight 5-bay audio console. MPEG-H mixing and panning, as well as basic metadata authoring, is already supported in this preview, allowing creation of immersive MPEG-H programming using the MPEG-H control track format.

"Fraunhofer is very pleased to work with Blackmagic to bring MPEG-H to DaVinci Resolve, since it now makes creating immersive sound productions as easy as editing a stereo show. We are excited since this offers Resolve users a simple and accessible way to begin using next-generation audio without configuring separate audio programs and plug-ins. Also, MPEG-H is not just immersive sound or surround sound, it has audio objects that a user can adjust in volume and position to hear alternate commentary or other sounds in the same bitstream," explains Robert Bleidt, Division General Manager at Fraunhofer USA DMT. 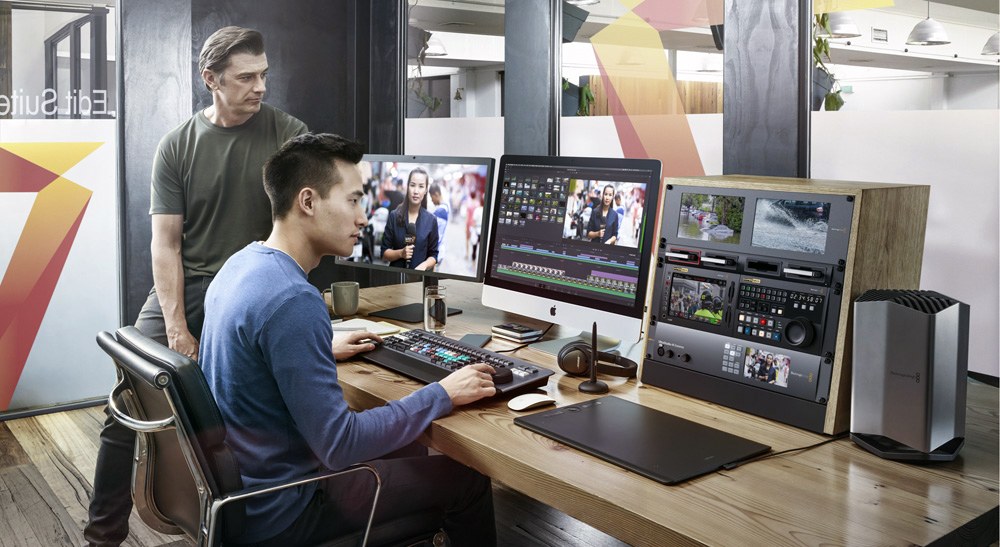 DaVinci Resolve 16 Studio will allow creating content in both the MPEG-H control track format and as MPEG-H bitstreams in standard MP4 files. The control track is the MPEG-H Audio System's production format that stores audio as standard uncompressed PCM tracks, plus a time-code like audio track that contains object and scene metadata and channel assignments. The control track format allows content to be re-edited multiple times without any generational loss from audio encoding or lipsync issues and is today's format for professional MPEG-H content transmission and archiving using existing equipment. Content in the control track format is automatically encoded into an MPEG-H bitstream by video encoders for final broadcast or delivery. DaVinci Resolve 16 Studio will also encode MPEG-H bitstreams into an MP4 audio or audio/video file directly for final delivery.
www.blackmagicdesign.com/products/davinciresolve/fairlight
related items