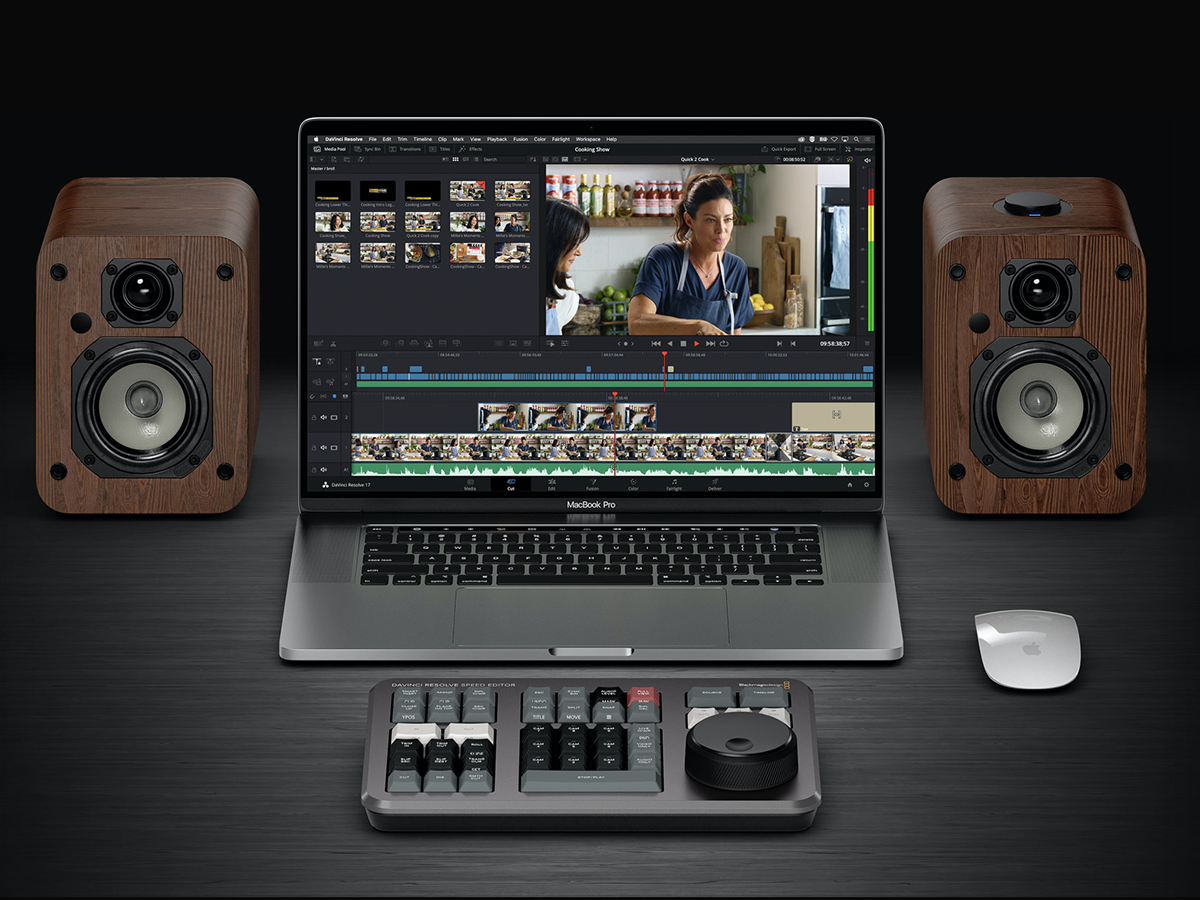 With an extremely reliable evolution path, it's getting harder to even grasp the combined power already contained within DaVinci Resolve software. It's one of the most affordable solutions, it's available for macOS, Windows and Linux, and its features and continuous improvements put a lot of other software developers to shame in a way that is almost embarrassing. Having started as a color corrector for the elite post-production facilities, since the acquisition of DaVinci, Blackmagic Design repositioned the DaVinci Resolve software into the core of a very successful strategy to evolve post-production in the digital media age.

DaVinci Resolve 17 is a major new release with over 100 new features and 200 improvements and elevates the software's combined capabilities in every way. Colorists will appreciate the color page features with new HDR grading tools, redesigned primary controls, AI based magic mask and more. Editors get a metadata slate view with bin dividers, zoomed waveforms for audio trimming, smart reframing, a unified inspector and dozens of other time saving tools. In addition, compositions created in Fusion can now be used as an effect, title or transition on the edit and cut pages. But this time its the audio section, the Fairlight part of DaVinci Resolve 17, that gets an ever bigger upgrade, introducing updated features for immersive audio and object-based projects, while improving the workflow in all fronts. Fairlight updates mouse and keyboard edit selection tools so users can work faster, along with Fairlight Audio Core and FlexBus, a next generation audio engine and busing architecture with support for 2,000 tracks.

Additionally, the free version of DaVinci Resolve now includes the flexible multi user collaboration tools previously available in DaVinci Resolve Studio. This means, that large studios will be able to have multiple users all working on the same project at the same time, even when they use the free version of the software to collaborate remotely. Great news for freelances.

On the hardware side of the news, Blackmagic Design launched the DaVinci Resolve Speed Editor (US$295; available now), a new keyboard for DaVinci Resolve's cut page that allows a new and dramatically faster editing solution that’s a combination of integrated hardware and software. This means the editor can work much faster because, unlike a mouse, the DaVinci Resolve Speed Editor has a control for each edit function and can perform multiple tasks at the same time. It even allows controlling audio levels, by holding the dedicated key and adjusting the level using the search dial.

The keyboard is a wireless (Bluetooth) hardware extension of the software that can be powered and charged over USB-C. It sells for $295, which is the same price of the full DaVinci Resolve Studio software license. For a limited time, everyone who purchases DaVinci Resolve Studio from a Blackmagic Design reseller will get the DaVinci Resolve Speed Editor included free of charge! This, because hardware actually helps to pay the bills for software development, as Grant Petty explained during its global presentation event. 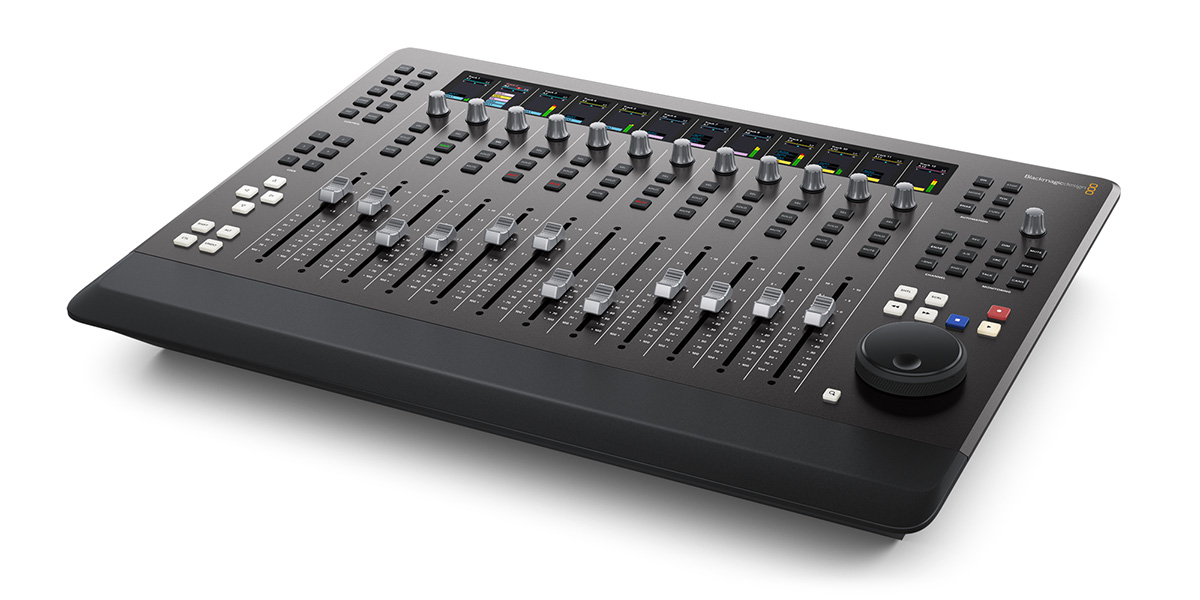 The other major hardware announcement was the new Fairlight Desktop Console (US$3,495; available in December 2020). This affordable audio control surface with 12 flying faders features a familiar mixer design with precision control knobs and illuminated buttons for quickly identifying channels. There are built in LCDs above each channel strip for pan and effects control, and full automation control. The faders and knobs are all touch sensitive and can be used to automate a variety of parameters and plug-in settings, controlling channel functions, recording, monitoring, and navigation within projects.

DaVinci Resolve 17
Full details about the DaVinci Resolve 17 release are available in the stunning Blackmagic Design website, fully updated shortly after the announcement was made - almost in Apple-like fashion, just much more detailed and interesting. As stated, DaVinci Resolve 17 introduces over 300 new features and improvements and - for those not using the software daily - it's almost painful to go through all the vast possibilities. In the presentation, Grant Petty explained the main new features, showing clearly that he fully understands and controls what was added, but most importantly, shares the vision of what the software should do and how it should work. This is rather unique for a CEO of a large company, and is simply inspiring.

Focusing on the audio section, DaVinci Resolve 17 is the biggest update ever, with new features, tools and core improvements that make it faster and the highest quality solution for audio post production. The context-sensitive editing features previously available on the Fairlight Audio Editor are now fully available in the Fairlight page, and make editing incredibly fast.

Fairlight Audio Core is a low latency, next generation audio engine that intelligently manages workload by using all CPU cores and threads, as well as the optional Fairlight Audio Accelerator card. Users get up to 2,000 tracks, each with real time EQ, dynamics and 6 plug-ins, all on a single system.

FlexBus is a flexible bus architecture that uses up to 26 channel wide multi purpose buses instead of fixed buses, with no limitations on routing. Users can send tracks to buses, buses to tracks, and buses to buses in as many cascade layers deep as needed to create massive sessions. 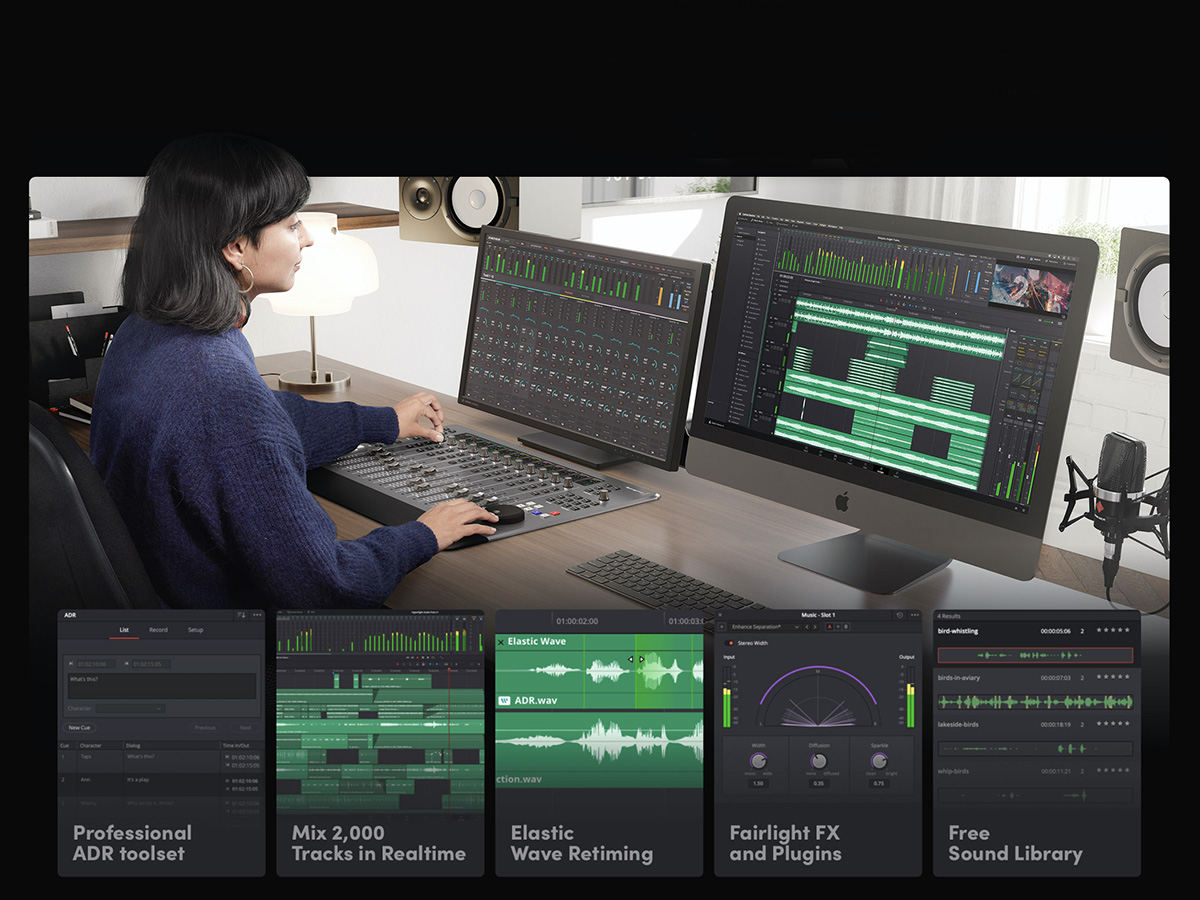 The new transient analysis tool automatically detects individual words, beats, or sound effects. Transient markers are displayed as vertical lines in the waveform. Users can navigate between them using the arrow keys. Transient markers make it easy to identify specific parts of a sound for editing.

And the combination of Fairlight Audio Core and FlexBus enables large projects with thousands of tracks on a single system. Previously this required "chase" computers to be sync’d with a primary system. Plus DaVinci Resolve’s multi user collaboration lets multiple sound editors work on the entire project at the same time. 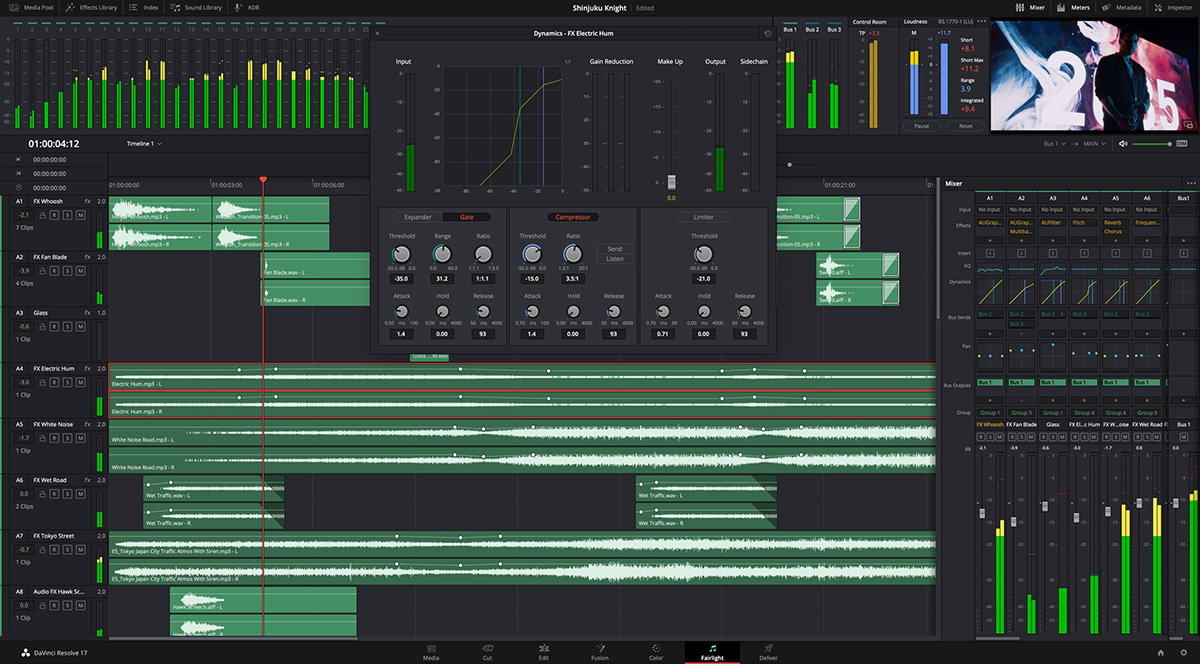 Summarizing, it's enough to say that DaVinci Resolve 17 is now a match for any of the existing software alternatives for any facility of professional looking for an integrated environment, and not just focusing on activating, discovering and experimenting with plug-ins. More important, its metadata integration and collaboration tools now place it at the lead, against Avid and Adobe in dealing with major motion-picture, gaming, reality production, or television series. And its format support and flexibility is second to none, particularly when combined with the vast portfolio of dedicated media creation tools that Blackmagic also offers, from cameras advanced consoles and panels.

Plus, DaVinci Resolve 17 adds improved format support on the media page, new delivery options, and a unified inspector design on the media, cut, edit and Fairlight pages. More important, the new software also features consistent timeline navigation across all pages, with better metadata support, new image scaling algorithms, the ability to share smart bins, smart filters and optimized media across all projects on a system, and even more GPU and CPU accelerated Resolve FX, making it easier for creative professionals to collaborate in any major project, even while working from home.

"This is a massive update and it has amazing new technology and features for colorists, audio engineers, editors and visual effects artists," says Grant Petty. "While the new color science, HDR grading and improvements and Fairlight usability are the most noticeable features, what I am most proud of are the thousands of small improvements that customers will notice every day!"