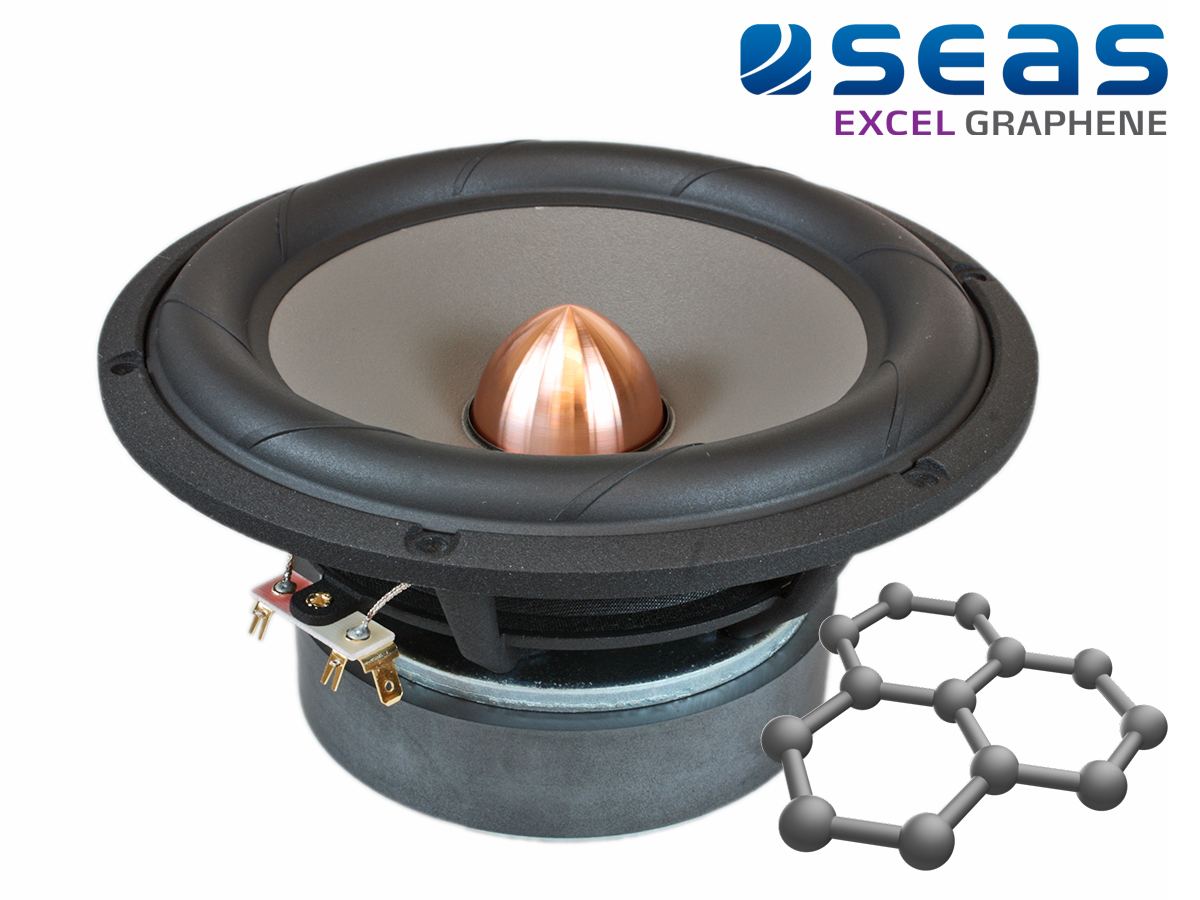 As the company previously detailed, its Graphene Magnesium Technology is an ongoing effort that so far involved more than a thousand engineering hours and significant investments. But the new SEAS Excel Graphene product line is now a reality and the new W19NX001 woofer is another great testimony of the possibilities.

"Linearity, dynamic capability and clarity have our highest priority, for truthful reproduction of high-res audio. The W19NX001 (E0076-08) is a state-of-the-art High-Fidelity woofer, intended for bass reflex and closed box designs," SEAS states in the announcement.

As usual, for distribution (DIY), these new speakers will be packaged in pairs. The precision cast, machined, and Graphene treated magnesium cone acts as a piston through the working frequency band without showing any sign of midrange resonance. High purity Graphene, which is a nano-material with special properties, is added to the surface treatment. "The SEAS Excel magnesium cone itself is known for its low moving mass and its high stiffness and damping, unrivaled in the industry, and therefore capable of transmitting even the finest details from mechanical motion into the air, so you can enjoy the cleanest and purest sound," they add.

As SEAS explains, high damping magnesium is the best material for woofer cones because of its damping properties and light weight, combined with the good sound speed which stems from the stiffness-to-weight ratio. For woofer cones, the damping is of highest priority, even if it compromises stiffness a bit, because the woofer cones have their early break-up modes inside the audible frequency range.

Working with researchers in the Nanobiomechanics group at the CIC nanoGUNE center in Spain, the engineers at SEAS Fabrikker have succeeded in improving the loudspeaker cast magnesium cones pioneer by the Norwegian company since 1990, thanks to graphene. In collaboration with nanoGUNE, graphene oxide has been used to enhance the properties of these cones even further, thus rendering them more resistant and even improving their mechanical characteristics.

"Graphene oxide helps to protect the magnesium by making it more durable," explains Raul Pérez-Jiménez, head of the Nanobiomechanics group at nanoGUNE. "There were papers published referring to the use of graphene oxide on metal surfaces exposed to hostile environmental conditions, and we came up with the idea of applying this to loudspeaker cones. SEAS expressed great interest in this idea from the start," states Pérez-Jiménez.

The research has produced results following numerous tests. “The first premium-range loudspeakers whose cones have a surface of graphene oxide are now on the market. It is a material which makes them longer-lasting without affecting the mechanical properties of the loudspeakers and even enhances them,” he points out. “The loudspeakers were tried out in situ in very damp locations where corrosion frequently occurs in equipment of this type, such as Singapore and Donostia-San Sebastian, and the results were hugely positive," adds the nanoGUNE researcher.

For the new Excel Graphene drivers, a titanium voice coil former with a long copper voice coil winding gives a very stiff connection to the cone and provides excellent force transfer, to achieve large linear excursion. The non-conductive former also doesn’t add any damping to the excursion to allow for a very precise and transient sound reproduction, without electromagnetic damping.

An FEA optimized magnet system with precisely fitted copper parts for excellent linearity and symmetry is designed for high power handling and low transient distortion. A heavy copper ring below the T-shaped pole piece reduces nonlinear and modulation distortion and an additional copper cap in the air gap of the magnet system reduces distortion and voice coil inductance, resulting in a sound without colorization. The exact geometry of the pole piece is optimized for completely linear inductance, independent on input power, and with only +/- 10% variation over the +/- 10 to 15 mm excursion range of the woofer.

A unique radial reinforced rubber surround reduces radial resonances and prevents surround break up at large excursions. The extremely stiff and stable injection moulded metal basket, keeps the critical components in perfect alignment. Large windows in the basket both above and below the spider reduce sound reflection, air flow noise and cavity resonance to a minimum.

"The combination of low mechanical and electromagnetic damping ensure high quality reproduction and brings out even the finest micro details in music. The high-performance magnet system and titanium voice coil and its connection to the cone has very high power handling, suitable for modern amplifiers (e.g. Class-D). Therefore, the driver has exceptional high dynamic capability, which the light and stiff and well damped magnesium cone transfers into clean and undistorted sound, suitable for truthful High-Res audio reproduction," SEAS explains.

When the original SEAS Excel line was launched in 1993, more than 25 years ago, it started a new era for the brand, and these drivers immediately became recognized for their excellent qualities, even by today’s standard. With the new design, every aspect of the speaker from input to output has been scrutinized and optimized.

With the new Excel Graphene W19NX001 (E0076-08) woofer, SEAS introduced a new basket design to match the W16 (and L16) and the Extreme subwoofers, with new larger roll surround for higher linear excursion capability and bass performance. The W19NX001 is specified for 200W long term power handling at 8 ohms, with a sensitivity of 85.6dB (2.83V/1m) and a recommended frequency range from 20Hz to 2KHz.
www.seas.no
related items