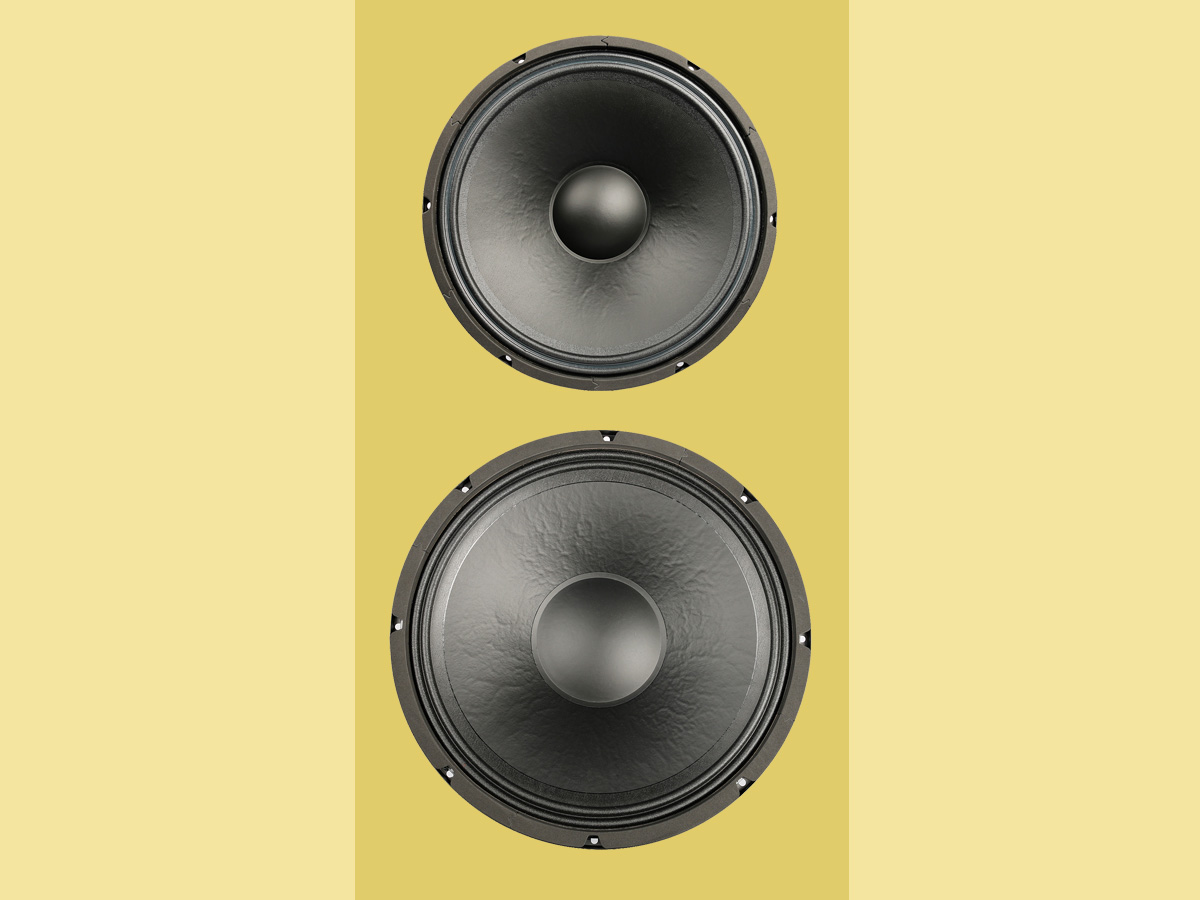 Not everyone can afford to have big speakers for music enjoyment at home. But when that's possible and space allows, dipoles and open baffle loudspeakers are an ideal project for DIY speaker builders and music enthusiasts. They are relatively simple to build, they look impressive, and the overall investment is largely rewarding. Particularly with open baffles, when those speakers are allowed to play in a room with suitable dimensions, where they can sound as loud and dynamic as an actual live concert. For that reason, as  speaker expert Troels Gravesen recommends, careful driver selection and the design of the baffle itself are critical aspects to get the low bass and some degree of control over the response.

Open baffle using large size woofers can generate phenomenal bass dynamics, while wide baffles "provide a different soundstage giving a window to the music, rather than bringing the music into the room," as Gravesen colorfully describes. The choice of drivers, usually falls in large sized woofers from pro audio manufacturers, some of which have noticed this type of application and have optimized some of their drivers specifically for open baffle.

As a company with large experience in speaker builder circles and high-end audio applications with SB Acoustics, Sinar Baja Electric (SBE) is now building an expanded catalog of professional transducers under its new brand, SB Audience, manufactured in Indonesia. And its engineering team, decided to design two large woofers optimized specifically for enthusiasts of open baffles. 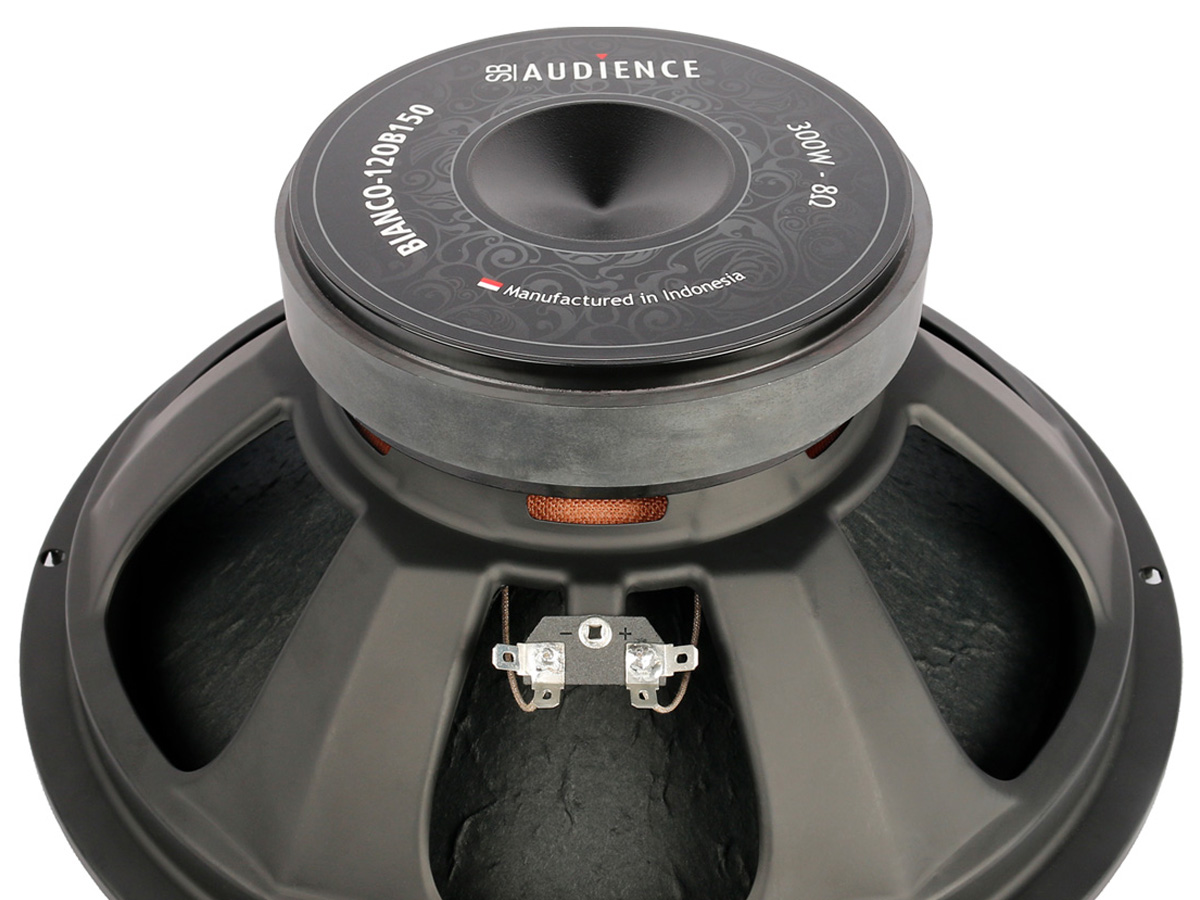 The new Bianco 12OB150 12" and the 15" Bianco 15OB350 woofers, both part of the "good performance at the most reasonable cost" catalog from SB Audience, use great-looking paper cone formulations that are also coated to maintain stable properties with temperature and humidity variations. Construction refinements include elegant six-spoke stamped steel baskets that are designed to be seen, and connections using long-life silver lead wires. SB Audience clearly labels the new woofers as "specifically developed for open baffle applications" based on its high total Q (Qts) parameters, suitable for free-air applications. And in fact, they are listed in the special drivers category, separated from the brand's woofer products, already with 25 different models, half of which in the subwoofer category.

First off is the 12" Bianco-12OB150 woofer with a generous 2.4" voice coil on a fiber glass former, powerful ferrite magnet motor, specified with a high excursion of 18mm, and with a Total Q of 0.63, making it a good choice woofer for open baffle designs. The 12OB150 uses a proprietary cone paper material, combining silk cotton tree and manila pulp, which is then coated with a weatherproof formula. This is an area where SBE excels, having a dedicated manufacturing facility and research department for soft-parts such as speaker cones, spiders and surrounds. In this case, the 12OB150 features a matching double half roll with damping glue surround.

Also designed for open baffle applications, but offering an impressive Qts of 0.7 is the new 15" Bianco-15OB350 woofer, certainly a great choice for users looking for the most powerful bass in those designs. With a high power handling of 350W (AES) and an excursion of 25mm (11.02 Xmax), the 15OB350 was specified far above average. It also features a proprietary cone paper material made in-house by SBE, ferrite magnet system with 2.5" voice coil on a fiber glass former, with a vented back plate for reduced compression. As SB Audience characterizes, "the sound is punchy, detailed and dynamic in a way not usually encountered with open-baffle woofers."

Also worthy of note for speaker builders is the fact that both woofer datasheets include detailed measurements of overall, bolt circle, and baffle cutout diameters, as well as mounting depth and flange and gasket thickness.

It's important to highlight that all SB Audience products are manufactured by Sinar Baja Electric, one of the largest vertically-integrated speaker manufacturers, with decades of experience in hifi, professional audio and automotive markets. Specifically for Indonesia and neighboring Asian markets, SBE has been manufacturing pro audio products for more than 38 years, an activity which the company is now consolidating in the new SB Audience brand. Together with SB Acoustics and SB Automotive, the new expanded SB Audience catalog is now available for distribution at a global scale, with local distribution centers in the US, Europe and Asia. Distribution and dealer inquiries are welcome and should be addressed to Mark Thomsen.
www.sbaudience.com
related items