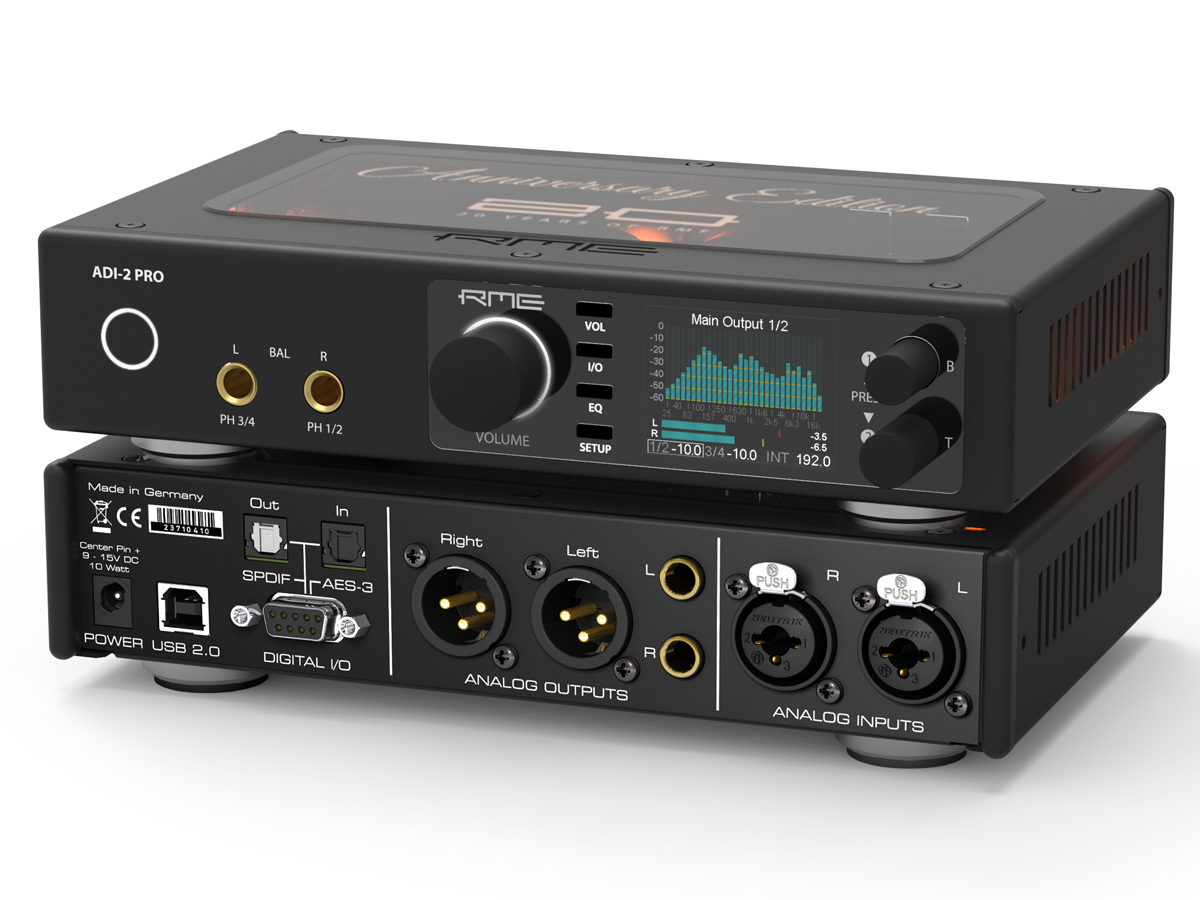 Strictly limited to 500 units worldwide, the RME ADI-2 Pro AE features the same sound and functionality as its namesake, but comes decked out in an all-black housing, matching the style of audiophile-level HiFi setups. audioXpress has been testing and measuring the ADI-2 Pro and we can share we are totally impressed with its audio quality. This new look Anniversary Edition will just increase its appeal with many potential users looking to leverage the headphone amplifiers and format conversion abilities.

The German company recommends the ADI-2 Pro also as a universal monitoring controller, high-class A/D converter and high-end audio interface for computer-based measuring systems. audioXpress' measurements attest that this will be indeed a suitable choice for high-end enthusiasts and home users, as well as professional recording studios.

According to RME, even though the units are essentially the same, the main differences between the RME ADI-2 Pro and the RME ADI-2 Pro AE include three orange LEDs that illuminate the PCB and the components and are visible with a unique see-through top, while the plexi's inside print (scratch protected) states 'Anniversary Edition, 20 Years of RME'. The rear TS double socket has gold-plated contacts, to match the front panel headphones connections, and an additional metal shield optimizes crosstalk suppression between the left and right XLR inputs. The shield is similar to the one preventing crosstalk from the TS outputs to XLR R input, which is a feature of all RME ADI Converters. Finally, the four rubber feet have been replaced with four stylized Hi-Fi feet with brushed chrome design, the four holes on the side of the original, designed to allow for rack ear mounting, have been removed and there's a special sleeve and manual (with additional text and matching photo).

"RME’s anniversary reference AD/DA converter is a host of devices all put together into one unit, with a simple and mostly automated way of using it right out of the box. A unit with the industry’s biggest footprint per feature ratio, excellent tech specs, crystal clear and transparent sound signature, and two extremely powerful headphone outputs," RME states.

The USB 2.0 port is fully Class Compliant (UAC 2) for connection with compatible iOS devices, and is also used for firmware updates. Including an external switched power supply with lockable connector, the ADI-2 Pro can be easily powered from battery, opening up mobile applications as well as galvanically isolated use cases. As a computer interface the ADI-2 Pro offers a stereo (2 in / 2 out) and a multichannel mode (6 in / 8 out). Compatibility with Mac OS X comes right out of the box. Under Windows the ADI-2 Pro uses RME's MADIface series driver, for full WDM and ASIO compatibility and highest performance.

A review of the RME ADI-2 Pro will be published in the printed edition of audioXpress - also available in digital format here and on Magzter platform here.
www.rme-audio.de | www.audioag.com | In the US go to www.synthax.com
related items