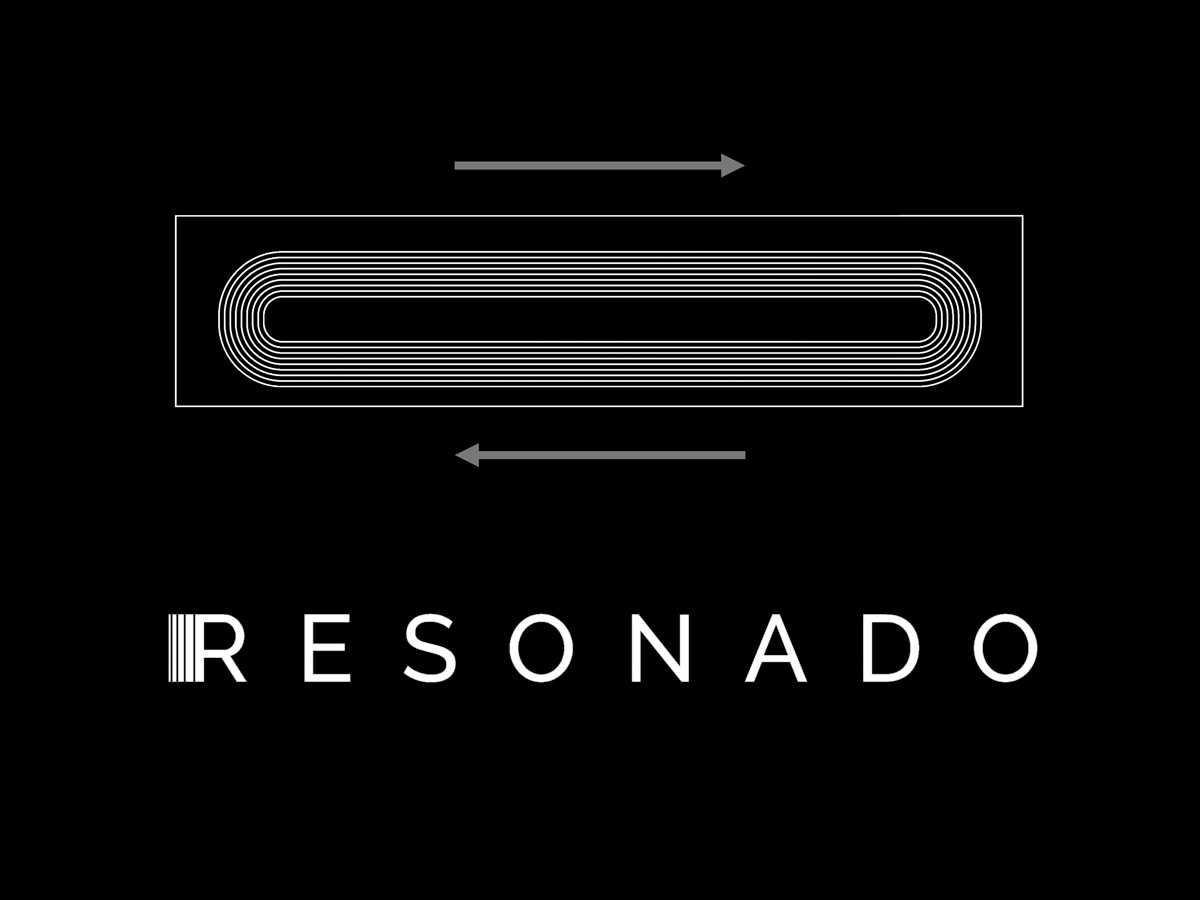 The concept for the new speaker topology was initially conceived about 10 years ago in South Korea by father and son Leeg Hyun “LH” Cho and Brian Youngil Cho. LH was once an executive at LG and now a serial entrepreneur with several successful “exits.” Resonado was founded in 2017 by Brian Cho, Christian Femrite, Erikc Perez-Perez, and Peter Moeckel, to continue the development and commercialize the technology. The four met while pursuing degrees at the University of Notre Dame.

The four co-founders were motivated by the prospect of creating better speakers and to develop audio systems with the patented Flat Core Speaker technology. Enticed by the prospect of being freed from century-old design constraints, dozens of prospective clients have expressed interest in implementing the developing technology. In 2018 Resonado focused on the development of 30 Watt speaker driver targeting OEM manufacturers, and several have already started pilot projects with existing prototypes, including major international corporations in automotive, and consumer electronics.

Already in 2019, Resonado closed a pre-seed round of fundraising from institutional capital, and finalized the development of its first speaker driver design (MVP) and entered a strategic partnership with Cornes Technologies of USA and Japan.

The first Resonado FCS design is a high aspect ratio configuration which has a range of product packaging advantages. When oriented vertically, it yields wide line source horizontal coverage with reduced midrange ceiling and wall reflections.  For soundbars, the form factor enables a shallower and lower profile resulting in a more elegant design. With an aspect ratio typically of 4 to 1, more piston area results at lower cost than conventional round speakers of the same height.
For automotive applications, implementing FCS technology means a far lighter sound system and far more flexible speaker placement – such as A and B pillar locations. At the recent 2019 Tokyo Motor Show, the direction of automotive sound was strongly pending towards personal phased arrays of small speakers. The promise is each individual seat can have separate program material, more effective active noise canceling, and for the vehicle driver, enhanced situational awareness. The high aspect ratio form factory of FCS enables installation into the A and B pillars, dash boards, and headrests.

While FCS technology has a somewhat different internal structure from conventional speakers’ workings, the material supply chain remains essentially unchanged. For that reason, Resonado has been able to source all of the components (spiders, voice coils, frames, diaphragms, etc), albeit with new tooling, from all the same vendors used for conventional speakers.

Instead of a cylindrical magnet-and-voice-coil assembly, Resonado’s speakers use a planar voice coil with bar magnets. The voice coil can be coupled to the diaphragm in different configurations including those that offer a new style of modular driver design. Different voice coil windings and material implementations are made possible by FCS structure.

Diaphragm
The diaphragm is typically a high aspect ratio planar, with material(s) dependent on the application. Construction can range from paper, to composites such as woven or crossply carbon fiber, honeycomb, or foam-core, to mention a few. Mechanical decoupling can be designed into the diaphragm for expanded top-end response in applications where used without a tweeter.

Surround and damper
The surround can be fabric, rubber, foam or other, typically with anti-rocking pattern at the corners. The spider corrugations may be of various patterns including techniques for enhanced coil centering. Spider location can be in front of or behind the magnetic structure or dual spiders located in both positions (one flipped) for higher excursion and some distortion reduction.

Voice Coil
The voice coil is mounted perpendicular to the diaphragm. The planar coil can be of flex printed circuit for smaller and low power microspeakers, rigid PCB for medium power and wire on aluminum or epoxy glass bobbin construction for larger and higher power applications.

Magnetic Structure
Back in the 1970s, ferrite magnetic structures used square magnets and square top and back plates to reduce waste and cost. Flat Core Speakers, both ferrite and neodymium implementations, efficiently use bar magnets and matching rectangular return structures with cost reductions in the range of 20% over conventional topologies. 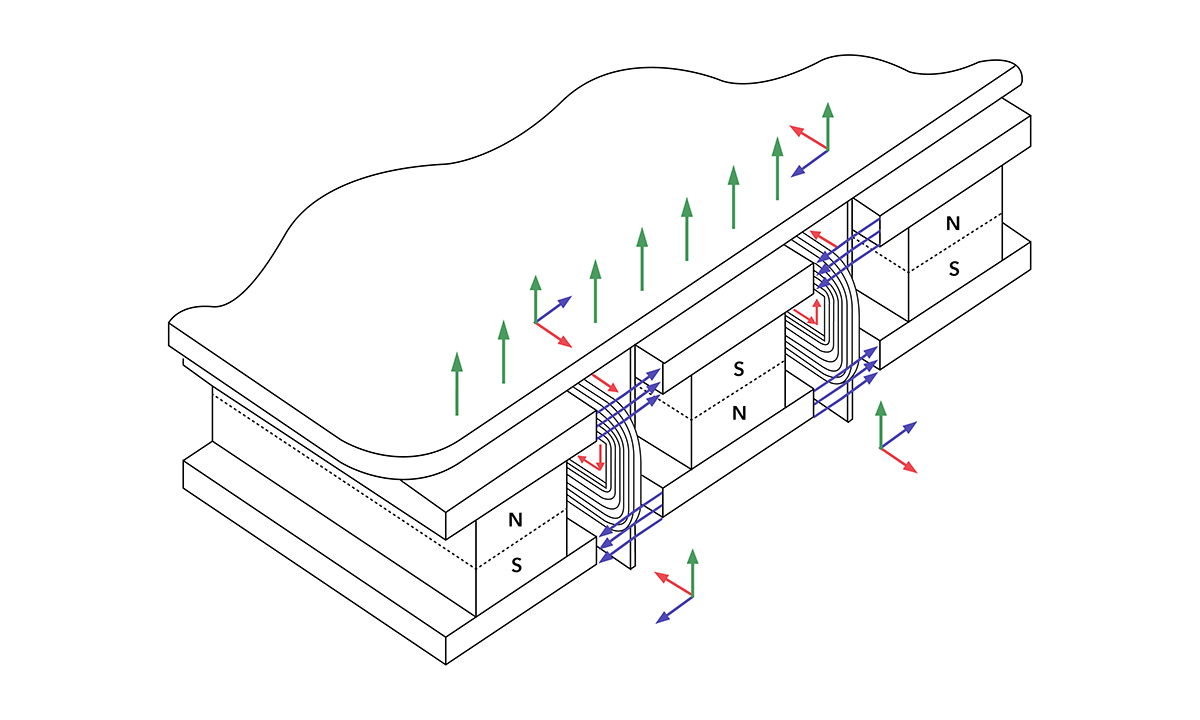 For subwoofer, higher power and lower aspect ratio (more square than rectangular) applications, FCS lends itself to very high BL yet low cost voice coil magnetic structure enhancement. The figure above shows a dual gap with the additional of only a 3rd row of magnets/return structure bars.
Resonado is now entering mass-production of its first commercial speakers and has reached OEM agreements with two offshore factories for speakers and a headphone driver factory. Initial models include RV speakers, soundbar drivers, line array in-walls and headphone drivers. Resonado plans to debut its first commercial driver, the Neo Mid 5, at CES 2020. To demonstrate its unique capabilities, the company will display multiple product prototypes implementing the Neo Mid 5 such as the Helix Bar, pictured above. The company will be showcasing their technology at Booth 51780 at Eureka Park and at suite 10306 in the Venetian Towers. Samples will soon be listed on the Resonado website and additional technical information is available upon request.
www.resonado.com
related items