Purifi Audio Promises to Reduce Distortion in Speakers and Amplifiers

A new Danish company, founded by Bruno Putzeys, Lars Risbo, and Peter Lyngdorf will be making its first public presentation to the industry in Munich 9-12 May, concurrently with High End 2019. The name is Purifi Audio, and as you can guess from the founders involved, the venture promises Class D amplifiers with record-breaking performance "unmatched by amplifiers of any operating class." But the new company will be doing more than amplifiers, since it will also reveal a new 6.5" woofer with "magnitudes lower intermodulation distortion across frequency and SPL."


Some of our readers who follow the audio industry closely might have already picked up the rumors about the new Danish project - until now in stealth-mode - which combines work on Class-D amplifiers and loudspeaker drive units specifically intending to reduce distortion in both. Purifi Audio was born out of the research work of Class-D pioneers Bruno Putzeys (of Philips, Hypex and Kii Audio fame) and Lars Risbo (Toccata Technology and Texas Instruments), according to which, the new "Eigentakt" self-clocking amplifier technology achieves a roughly 20dB improvement over previous generations.
The first product to be unveiled by Purifi is the 1ET400A, a 400W Class D single-channel, analog-input, amplifier module. Effectively, this is the module used in the prototype Lyngdorf 8 x 400 Watt Class-D amplifier shown at the ISE 2019 show. The technology is said to be completely indifferent to frequency, level and impedance variations, with measured intermodulation distortion way below any other technology. 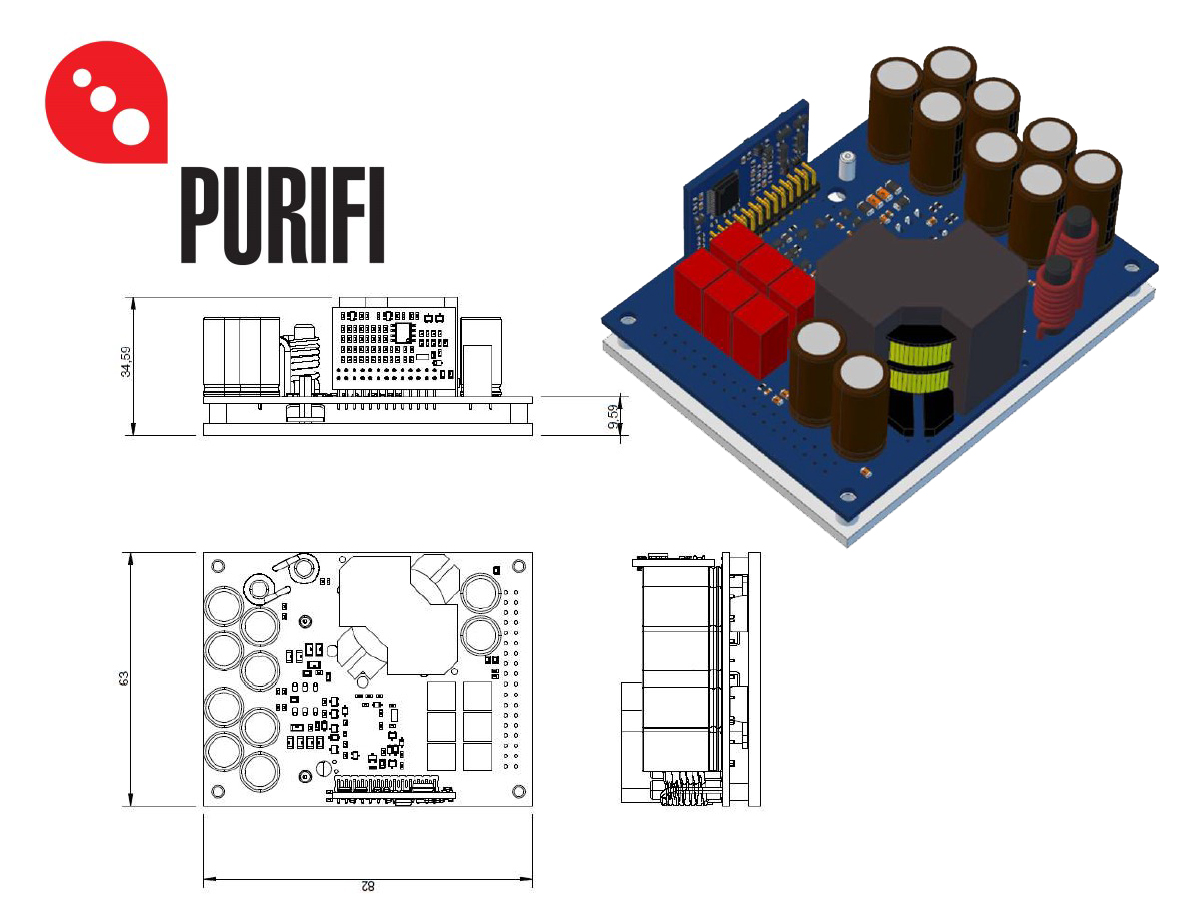 As the company details, Purifi’s continuing research into nonlinear control theory has produced the first mathematically exact large signal model of self-oscillating amplifier controllers. This breakthrough allows complete optimization of the feedback circuit and improves performance by at least an order of magnitude over existing implementations. The amplifier module further incorporates a comprehensive protection system that makes it robust and easy to integrate.

These circuits and methods enable a high loop gain (>75dB) in the entire audio band, corresponding to an unprecedented 110MHz Gain-Bandwidth Product, with negligible Intermodulation Distortion (IMD), a very good measure for how well an amplifier handles complex signals. THD remains extremely low at any frequency and any power level right until clipping, which according to Purifi translates into a total lack of sonic signature, and an ability to reproduce any type of music without preference for genres or production style.

The 1ET400A module also features a high power supply rejection ratio (PSRR), which places no particular demands on the power supply quality, and will be able to handle difficult loudspeakers with ease thanks to its load-invariant frequency response and negligible output impedance. Purifi also details a controlled, second-order low-pass response, enabling a very flat audio-band response with a sensible, 60kHz bandwidth, and reduced sensitivity to out-of-band noise from DACs, reducing the requirements on the DAC reconstruction filter and allowing better behavior with outboard DACs.

The Purifi 1ET400A's compact size and claimed high reliability will enable a broad range of premium audio quality applications, as the company explains. The module was specified for very low idle losses and reduced electromagnetic interference (EMI), allowing little to no effort to pass regulatory tests. The enormous loop gain allows relaxed timing of the power MOSFETs without degrading audio performance, Purifi also states. Another key feature is the exceptionally clean clipping and clipping-recovery in both voltage and current domains, resulting in the smallest amount of audible artifacts when pushed into clipping or overload protection. Finally, the overall implementation/integration of the 1ET400A module will save time and cost for system integrators, with an architecture that completely eliminates heterodyning in multichannel applications.

"Sonically the impact is quite startling. A few key customers have already gotten samples to play with, so we decided to go a bit more public and head to Munich," explains Bruno Putzeys, which also anticipates a new spin off company, Purifi Transducer Technology ApS, as a joint venture with PointSource Acoustics' (http://en.pointsource.dk/company-profile/) Carsten Tinggaard.

At the company's first presentation they will be unveiling the PTT19-W02-03 ultra-low distortion 6.5" long-stroke woofer (Xmax +/- 14.7 mm), rated for 4 Ω nominal impedance. Purifi says this new driver is optimized for excellent transient behavior and is able to reach high SPL without distortion, thanks in great part to moving parts designed with low internal damping. 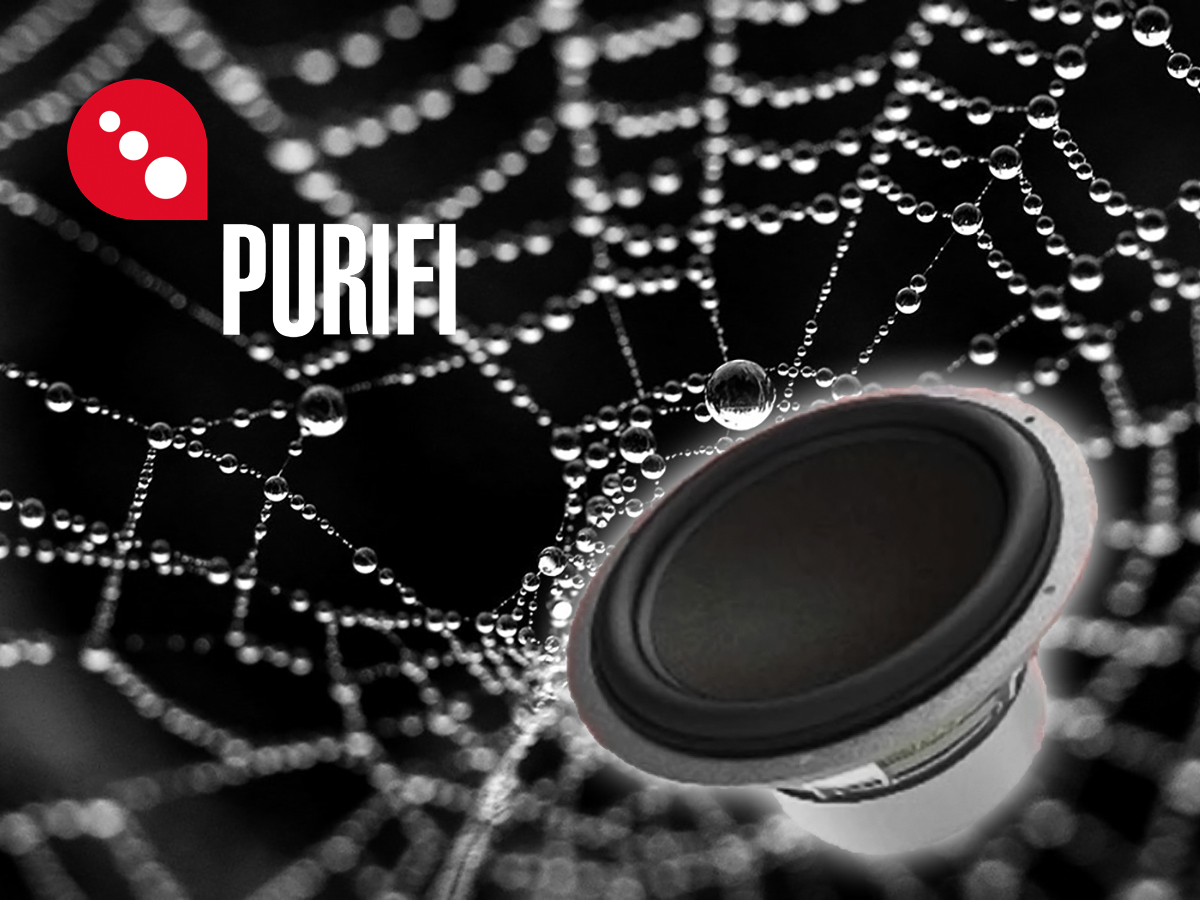 More about Purifi
In its corporate mission statement, Purifi Audio intends to "Improve people’s enjoyment of music by removing technical barriers," motivated to focus their R&D on loudspeaker drivers, since they are "by far the biggest overall quality limiter," and audio power amplifiers, "which until now has been the weakest link in the electronics chain," they state.

"We build what we simulate and simulate what we build. We are fluent in analog and digital as well as all the domains of electromagnetics, mechanics and acoustics. We believe that all that matters for the sound quality can be measured although we often have to develop new measurement methods that are indicative of the subjective sound quality. We direct all R&D efforts on such measurable metrics. If this does not agree with the listening results we improve our objective metrics," they add.

Together with Bruno Putzeys and Lars Risbo, is co-founder Peter Lyngdorf, another heavyweight backing the Purifi venture, owner of Lyngdorf Family Holding, Hi Fi Klubben, DALI and Steinway Lyngdorf, a group with over 1000 employees and multiple factories in Denmark and China. Peter Lyngdorf was the former owner of several audio companies including NAD Electronics and Snell Acoustics and the driver behind Digital Room Compensation technology from Snell DSP 1000 (1993) through NAD, TacT Audio and now Lyngdorf RoomPerfect.

Purifi Audio is based in Roskilde, Denmark and is also co-owned by Carsten Tinggaard and Claus Neesgaard. Tinggaard is the founder and owner of PointSource Acoustics (2009), and previously product Manager for Danish Sound Technology (2003) and CTO of Tymphany Denmark (2005) responsible for establishing the R&D Denmark facility covering Peerless, Vifa and Scan-Speak brands. Neesgaard held R&D and Business/Product Line Management roles in the audio products division of Texas instruments. The Purifi team is also consolidated with the talents of Kim Madsen, as applications manager and Søren Poulsen, responsible for R&D, bot having work previously with Texas Instruments.

During the four days of the High End 2019 show in Munich, Purifi promoted demonstrations combining the new Eigentakt amplifier technology with a loudspeaker based on the new 6.5” mid-woofer. Here is the interview we conducted during our visit.

The company can be reached by email here. Visit the website for more information.
www.purifi-audio.com
related items