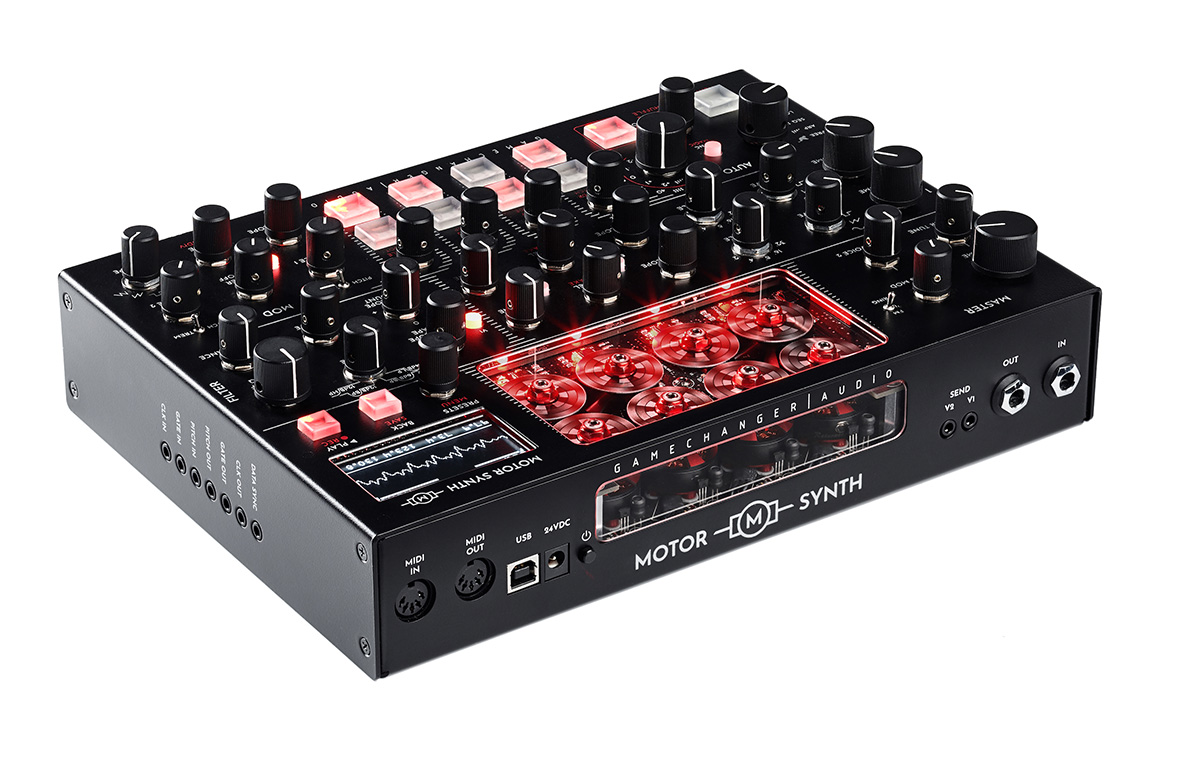 Following the launch of the Gamechanger Audio Motor Synth campaign on Indiegogo, which offers an early bird pricing of the new instrument at just $849 USD for 30 days, it reached the fixed goal of $50,000 in just ten minutes and $100,000 in two hours. Motor Synth, pitched as "the world’s first electro mechanical desktop synthesizer," has already been endorsed by Jean-Michel Jarre, Richard Devine, Girts Ozolins and other music industry artists and luminaries.

Gamechanger Audio is an innovative company founded by four friends committed to exploring uncharted territories of electronics, creating devices that stretch the imagination of both musicians and engineers. The company has been praised for innovation in creating its inaugural PLUS Pedal, the world’s first sustain and sostenuto pedal for all melodic instruments, based around a proprietary audio algorithm that lets users capture and sample small parts of the connected instrument’s signal in real time and loop them into a seamless, warm, and responsive sustained tone. The follow-up to that was the amazing PLASMA Pedal, forming the basis of a unique approach within the realm of overdrive and distortion by transforming the connected instrument’s live signal into a series of continuous high-voltage discharges within a xenon-filled tube. The latter has since been applied to a 19” Rack format and Eurorack modular format. The company now intends to continue this path with Motor Synth, the world’s first electro-mechanical desktop synthesizer. 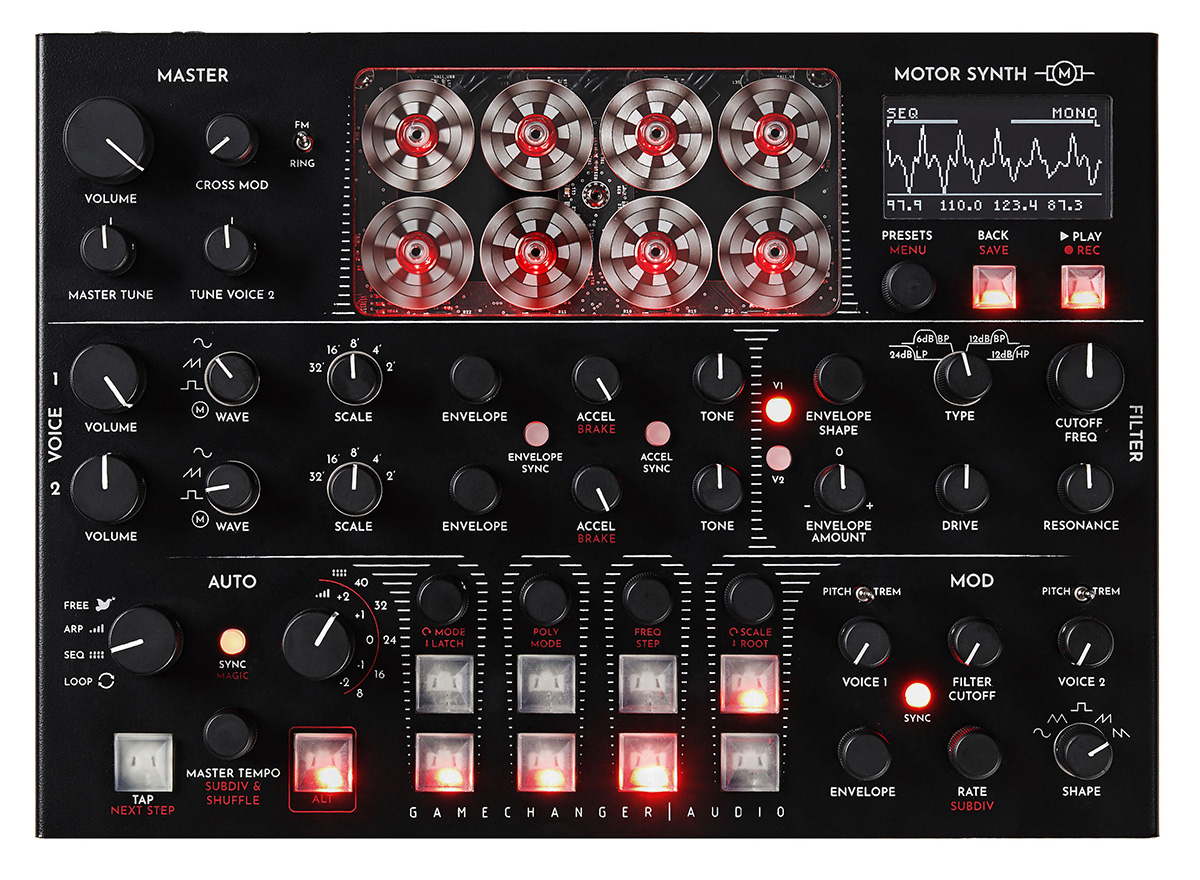 The Motor Synth features a stunning, tactile control surface and an aesthetically beautiful housing, while its "engine" produces sounds by accelerating and decelerating eight electromotors to precise RPM (revolutions per minute) that correspond with specific musical notes. The instrument’s eight-electromotor configuration makes it a four-note true polyphonic synth, with two voices per key played and four selectable waveshape types for each voice. The instrument also leverages recent developments in drone technology and repurposes some of these elements for musical purposes.

Motor Synth produces sound using two key principals: First, magnetic pickups are placed on each of its eight electromotors, each spinning rapidly to create industrial, otherworldly sounds that have never been heard before. Second, meticulously designed reflective optical disks have been attached to the shafts of each electromotor, each containing a graphical representation of three standard audio wave-shapes. As each electromotor spins, the disks are set into circular motion and each wave shape is read by a dedicated set of infrared sensors. This is then converted into an audio signal and a series of precise musical notes that correspond to the speed of the electromotors.

“Nowadays we can find so many synthesizers on the market more or less based on the same system,” says Jean-Michel Jarre. “I’ve been really blown away by Motor Synth by Gamechanger Audio. It’s an analogue, electro-mechanical synthesizer. The little discs all turn. It’s very cool — very nice and very different from a visual point of view. And, of course, the sound is quite extraordinary.”

Otherwise, Motor Synth features familiar analogue envelopes and filters alongside arpeggiation, cross modulation, LFO, sequencing, and multiple polyphonic mode facilities, as well as an innovative looping system that allows for layering rhythm and melodies — similar to a loop station. The unit can be played out of the box via eight built-in control keys and four floating tuning/frequency knobs. Performers and composers can also connect to a MIDI controller, such as a keyboard or DAW.

Motor Synth is also capable of tracking a monophonic audio signal, such as guitar or bass, via its 1/4-inch mono input. The device can be configured to act as a harmonizer for electric guitars or other melodic instruments, since it can recognize the pitch of a musical tone and instantly generate a complimentary tone by operating an electromotor at a matching frequency. Users can also create intervals and chords based on the frequency of an incoming signal with no need for a MIDI controller or inputting pre-programmed musical information. 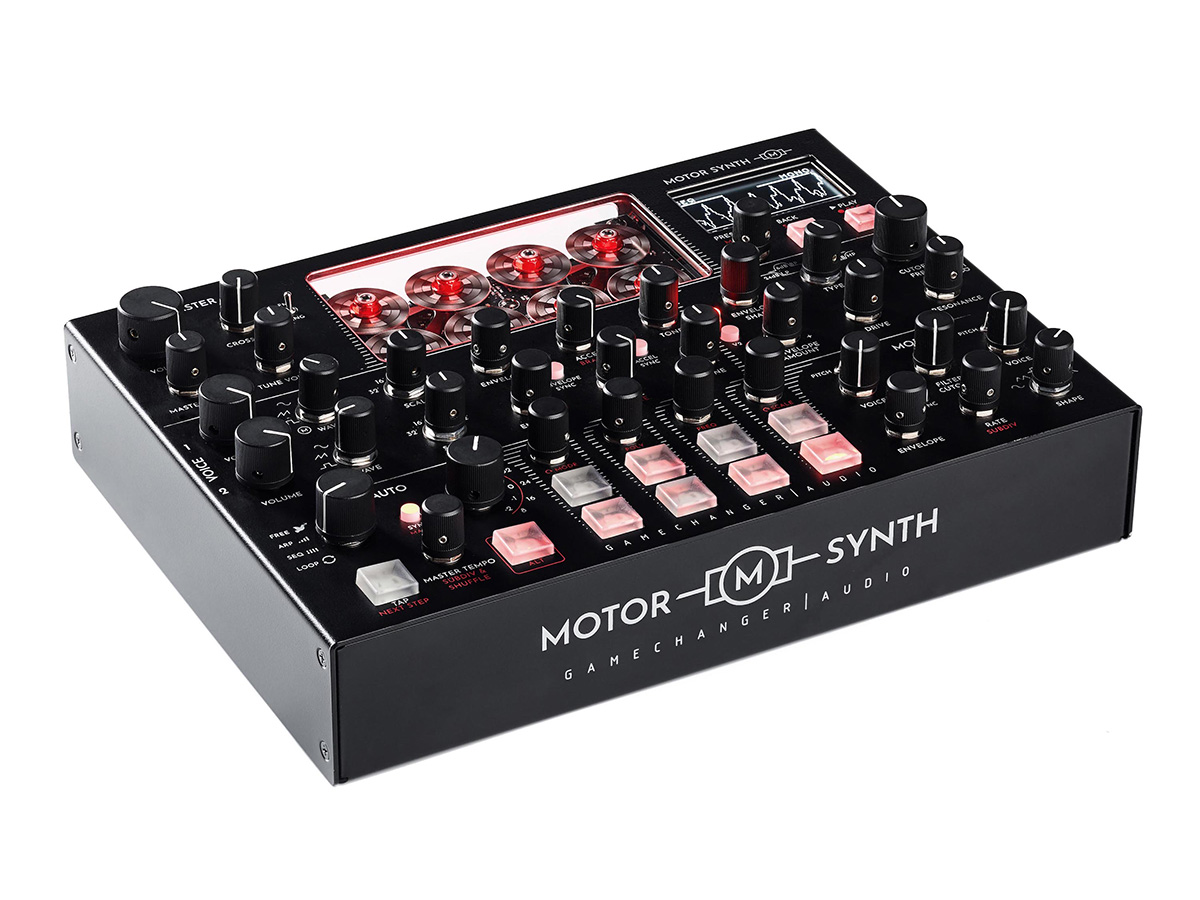 Just as its sound, the visual experience of Motor Synth is extraordinary. Motor Synth’s glass cover enables users to receive instantaneous visual feedback from the instrument itself by providing full view of the spinning electromotors. Enhancing the visual experience even further, the reflective optical disks attached to each electromotors shaft is coupled to a set of eight mini strobe lights — providing the performer with even more visual inspiration.

Motor Synth is scheduled to ship in December of 2019 and will be priced at approximately $1,299 USD when it goes on sale. Before that, there's still a chance to get the Indiegogo campaign discounted prices here.
There is a video to show a little of its sound potential here: https://youtu.be/sru4f4AJ0zI
www.gamechangeraudio.com/motor-synth
related items