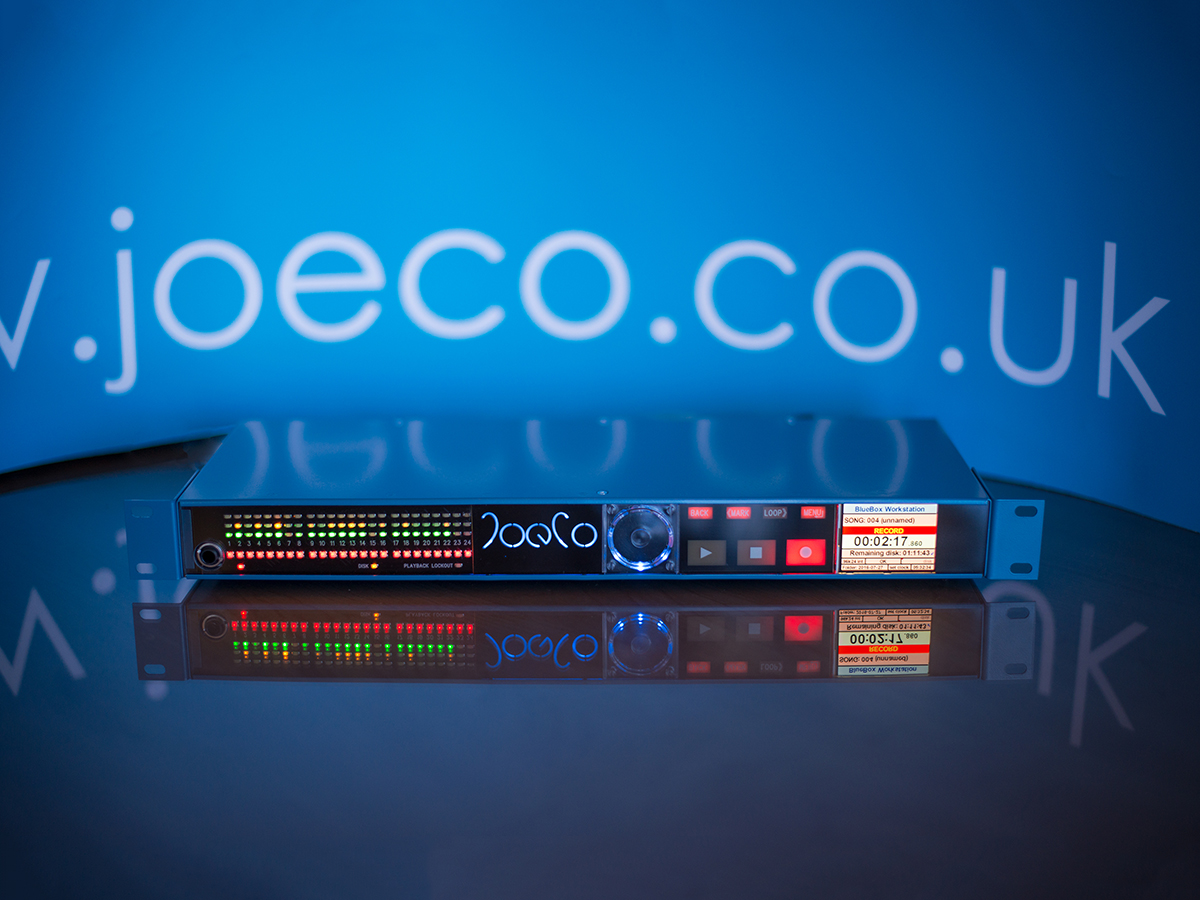 JoeCo Limited is a company based in Cambridge, England, founded by Joe Bull, an audio industry veteran with a large experience in music production and professional audio. Joe’s vision with JoeCo was to solve problems and provide solutions for music and audio, knowing that using just computers and software was not the ideal solution for all types of music production work - in particular live recording. And that’s how the original Blackbox Recorder was born.

The Blackbox Recorder was designed in cooperation with Mike Kemp and Simon Widdowson, the same team that, together with Joe Bull, founded Studio Audio & Video Limited, creators of the SADiE and pioneers of the Digital Audio Workstation (DAW) concept. Mike and Simon are now with Sintefex, a research and development company and manufacturer of digital audio products providing consultancy to other brands in the professional audio world.

JoeCo’s Blackbox Recorder was quickly recognised as an elegantly simple and efficient way to capture live multi-channel audio, directly to any external storage device, generating Broadcast Wave Format (BWF) files that can than be exported to any DAW for further processing and mixing. The 1U 19” rack format Blackbox Recorder doesn’t need a computer, can also be used as a multitrack player during sound checks and it proved robust enough to support daily use in the demanding world touring market. Since the recorder’s release in 2009, JoeCo has won multiple prestigious awards and the company produced a whole series of devices based on the concept, including the Blackbox Player, a dedicated multi-channel playback option specifically designed to replay backing tracks or multiple surround stems for live shows and themed entertainment. The BlackBox family is now available with analog, AES/EBU or MADI interfaces, as well as Dante audio networking, featuring also wireless monitoring and remote control with the JoeCoRemote app for iPad.

The whole concept was based on the notion of combining the best reliability of dedicated hardware with file-based digital recording and multichannel interfaces to complement DAW systems. Now, JoeCo is taking that concept a step further, raising the standard of DAW-based recording set-ups, with its new BLUEBOX range of Workstation Interface Recorders. 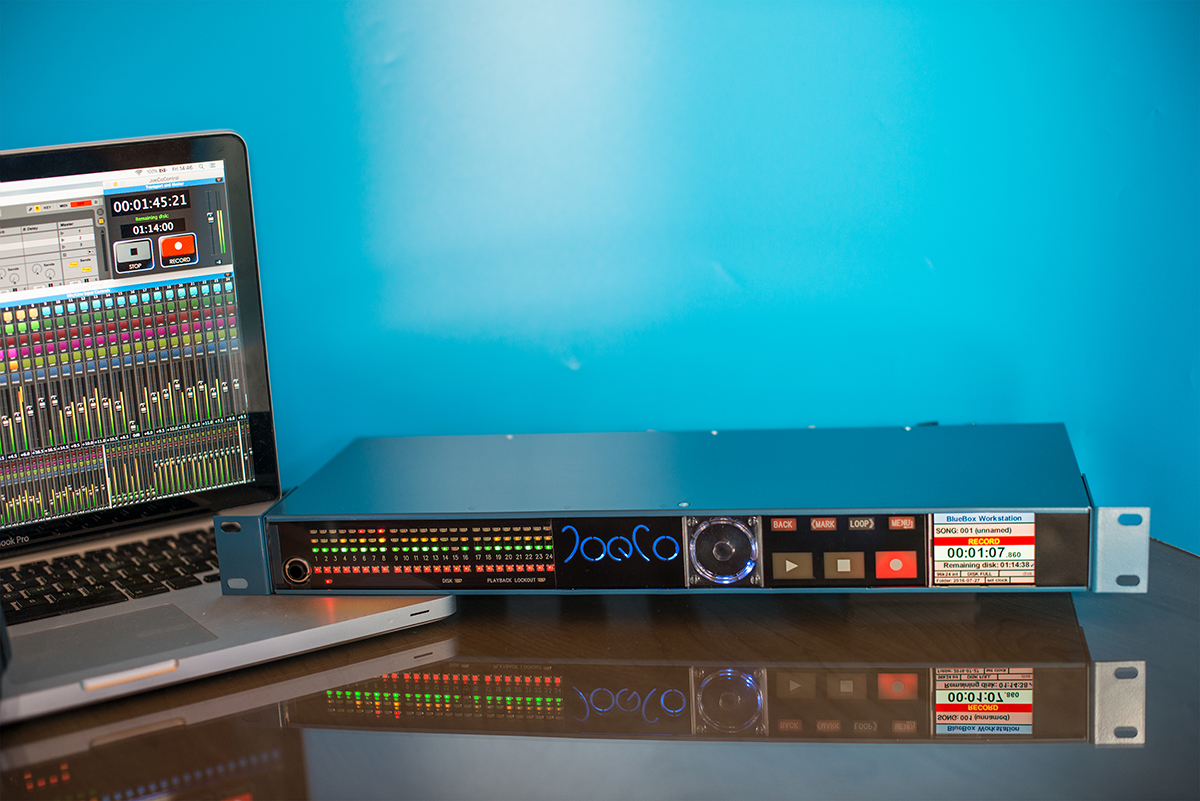 The concept expands on the Blackbox Recorder technology, creating a solution that combines the best of a dedicated file-based recorder and multichannel audio interface with integrated preamps that can be used in any production scenario, from live to the studio. The new JoeCo BLUEBOX delivers a USB2 recording audio interface with up to 24 channels of individually switchable mic/line inputs with best-in-class preamps on every channel, while also backing-up all of the work, all of the time – the ultimate safeguard against unexpected DAW freeze and failure. Meanwhile, for location recording, all of the features of the BlackBox Recorder are available to deliver a fully stand-alone, high-end multitrack audio recorder.

The BLUEBOX range launches with two Workstation Interface Recorders, the BBWR24MP and BBWR08MP. Both are 24-bit/96kHz models and have been designed and constructed to the same exacting standards as the BlackBox range, with its reputation for rock solid reliability. As the names imply, the BBWR24MP provides 24 channels of individually switchable mic/line inputs, while the BBWR08MP represents JoeCo’s most affordable package yet with 8 channels of individually switchable mic/line inputs and 16 channels of dedicated balanced line inputs. All mic channels on both units incorporate JoeCo’s renowned mic preamp designs.

Adaptability is also central to the appeal of BLUEBOX. In a studio environment, a BBWR24MP will deliver 24 channels of pristine audio at 24-bit/96kHz both to and from a workstation, with near-zero latency and simultaneously back up of all audio at the same quality. In the field, all of the mic preamps become available to deliver a fully stand-alone, multichannel audio acquisition recorder with near-zero latency and 24-bit/96kHz performance. Anyone who has done multitrack recording of a live concert directly to a laptop and decided not to use 96kHz “just in case it becomes too heavy for the computer and something goes wrong,” understands the advantages.

For larger applications, multiple BBWR24MP units can be connected to Mac (via Core Audio drivers) or Windows (via dedicated ASIO drivers). It’s also possible to control the BLUEBOX from the workstation itself with JoeCoControl, or using the JoeCoRemote app for iPad. Both platforms open a wealth of features and functions such as the setting of individual mic pre channel parameters - level, mic/line, phantom power, hi-pass filter, soft limiter and phase reverse - display of expandable channel strips and real-time monitor mix adjustment. Levels are displayed on high resolution meters.

“After the success of the BlackBox Recorder, we were asked to create an interface based on the same award winning technology. BLUEBOX is that and much more besides,” explains Joe Bull. “It’s a powerful high-end interface platform with the best preamps available, and it’s also the best insurance policy against losing work that any DAW-based studio can choose. No matter how robust a DAW-based set-up might seem, there is always a risk that something could go wrong and that critical work could be lost. With BLUEBOX, you can simply press record at the beginning of the day and it will capture all of your work, all of the time. Not even a power loss is enough to stop it.”

Local audio is recorded direct to an external USB2/3 drive in Broadcast WAV format for instant ingest into a workstation. Alongside the BlueBox’s multi-channel recording capabilities, provision is included for creating a simultaneous stereo mixdown. Optional support for iXML data can also be provided. The monitor mix can be adjusted in real time incorporating both local and workstation feeds giving the perfect mix for monitoring during recording. Expandable channel strips provide graphic faders, pan, solo, mute and other parameter controls.

The BlueBox’s compact dimensions, high-quality mic preamps and converters make it a practical, elegant solution for a range of applications. Ideal for use in the studio, giving unprecedented access to the workstation for external summing mixer or full mixing board with multichannel record and overdub on workstation, as well as for live engineers needing a supremely portable multi-channel recording option. On location The BlueBox runs off a 12V power source, and unused channels and features can be disabled in order to preserve battery life.

BLUEBOX will receive its official launch at IBC 2016, taking place from September 9th to 13th at The RAI in Amsterdam. JoeCo can be found in hall 8, on booth E-97.
www.joeco.co.uk
related items