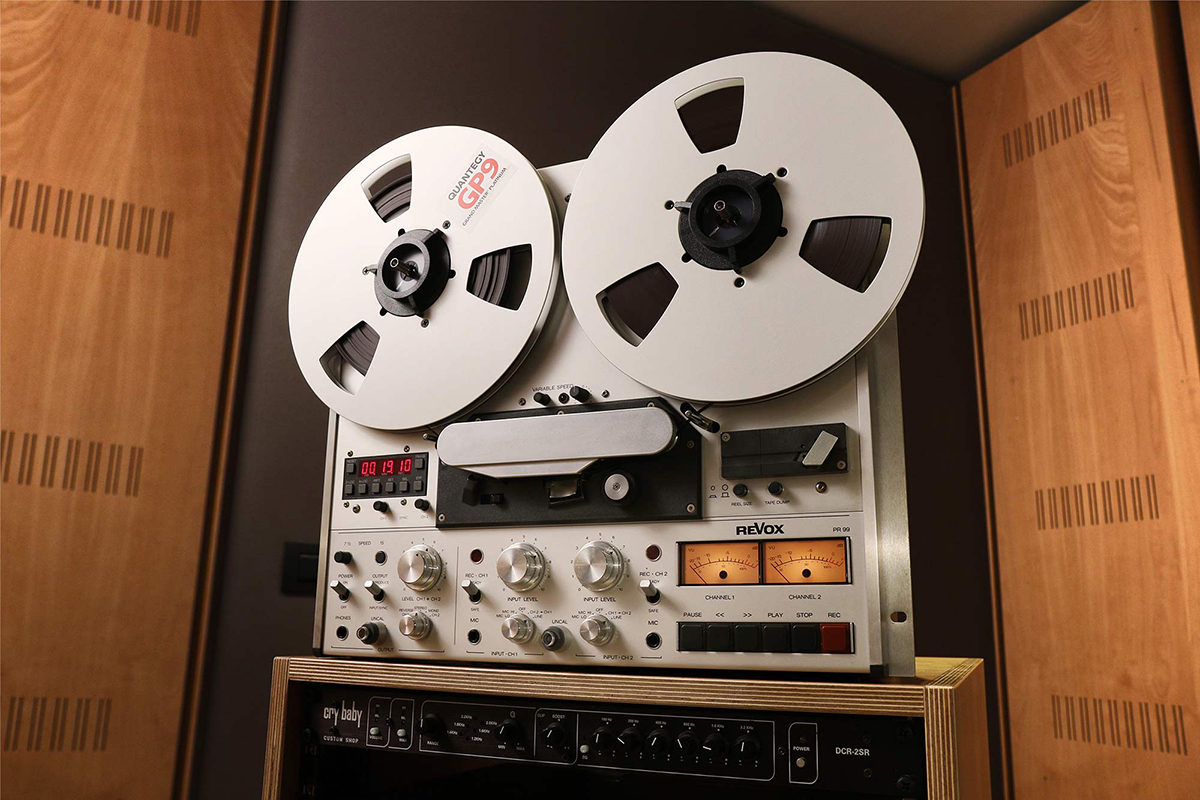 Many of the world's greatest songs were recorded on analog tape machines and featured the desirable and pleasing saturation, EQ and cohesion that could only come from a tape machine. Today, working with classic machines can be an expensive and time-consuming proposition. The T-RackS Tape Machine Collection offers this sought after warmth and character in a cost-effective package with a modern-day, practical workflow that makes it accessible by home and project studios.

This new plug-in collection is the culmination of two years of full time research and development on real world-class machines. Each machine went through a complete electronic and mechanical renovation to bring it perfectly back "to specs" before IK's DSP engineering team took each stage apart, studying and analyzing them to produce a model of the entire magnetic tape recording process.

This model works in symbiosis with a powerful dynamic convolution engine to capture the full essence of the real machine, and the T-RackS Tape Machine Collection faithfully brings all this magic right to any DAW. 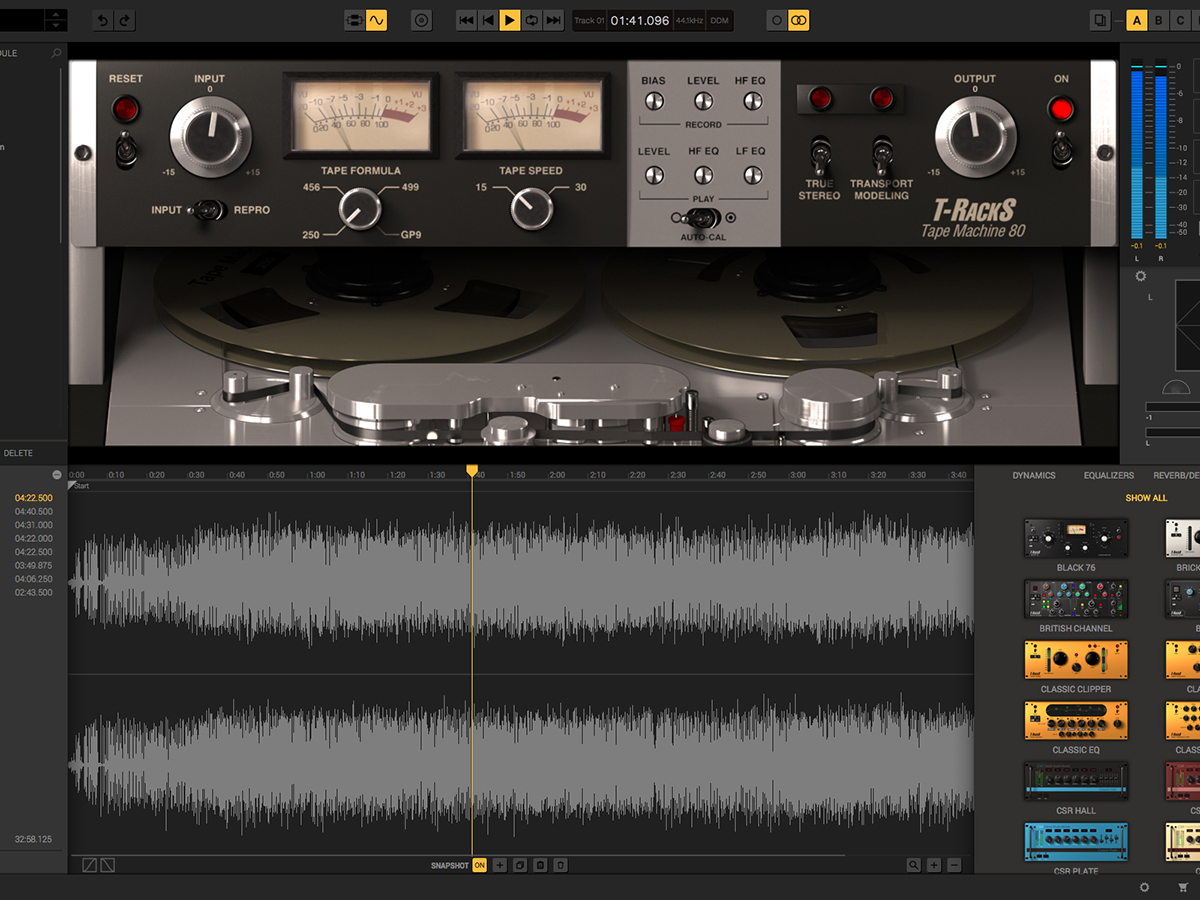 Tape Machine 440: The Ampex 440B series dates from the late 1960's and delivers an unmistakably soulful color that made this professional and historic mixing and mastering machine a legend. This superb blend of art and technology has the power to turn mixes into finished tracks.

Tape Machine 80: The legendary Studer A80 Mk II, in its various revisions, is an essential part of countless influential records. Engineered and manufactured in Switzerland from 1970 to 1988, it became the de facto standard for professional high-end multi-tracking. The A80's sonic signature is a perfect blend between transparency and subtle harmonic enhancement.

Tape Machine 24: A model of the MCI JH24. First produced in 1980, the JH24 was a staple in US studios during the 1980s. This completely transformerless, high performance op-amp-based design delivers a pristine, phase coherent and remarkably true-to-the-source audio performance. This results in a moderate and elegant polish.

Tape Machine 99: The Revox PR99 Mk II is a stereo professional recorder produced by Studer in the 1980s. Engineered around a hybrid design that combines the best of discrete and op-amp topologies, this model offers a very smooth frequency response, especially on bass, with almost no trace of the typical "head bump" phenomenon. A standard for broadcast and classical music, this machine was appreciated by audiophiles for its exceptional sonic quality.

Four magic tape formulas
Each plug-in in the Tape Machine Collection offers a selection of four different tape formulations, each with its own unique tone.

250: Modeled after the 3M/Scotch 250 formula, it is the most colored of the four formulas. It went in production around 1974 and delivers a warm tone with slightly more distortion and saturation than the other formulas included in the package.

456: Modeled after the Ampex 456 formula, this model went into production around 1974. Perhaps the most widely used tape, it contributed the most to what is considered "the" tape sound. It offers a warm, round tone with a slight touch of saturation that greatly responds to the recording level.

GP9: Modeled after the Quantegy GP9 formula, this tape accepts higher levels of signal with minimal distortion and compression, is very punchy and perfect for modern high-quality analog recordings.

499: Modeled after the Ampex 499 formula, this tape is designed to handle a great amount of level with minimal distortion and compression. It also exhibits added high frequency definition that makes it perfect for printing "digital-like" recordings, while still maintaining an analog sound.

Comprehensive Controls
All Tape Machines Collection plug-ins share the same set of controls to enhance the ease of use and allow for quick A-B comparisons among them. Key features include:

Signal path selection: With "Input," the signal only passes through the input and output electronic stages of the recorders, bypassing the tape. Depending on how the recorder is designed, the Input path can sound extremely transparent or just slightly more colored. "Repro" passes the signal through the entire analog recording system: input, recording amplifier, recording head, tape, playback head, playback preamplifier and output stage.

True Stereo: Even a perfectly aligned tape machine will have slight level, EQ and distortion differences between the left and right channels. The T-RackS Tape Machines Collection perfectly recreates these subtle differences to deliver the real experience. This feature can be disabled if desired.

Tape Speed: Select the speed of the tape transport between 7 1/2 and 15 or 15 and 30 inches per second ("ips"), depending on the tape machine used. The higher speed offers more fidelity, and the lower speed delivers a warmer, rounder tone.

Transport Modeling: Precisely models the behavior of the mechanical transport. Small irregularities in the movement of the tape create various degrees of sonic alteration to the audio, especially between the two channels. This control can also be disabled.

Record Bias: Ideal bias voltage settings provide maximum sensitivity and low distortion. Intentionally overbiasing is a common technique to produce a warmer, gently saturated sound. Underbiasing can be used to boost the high frequencies in a truly unique way and add distortion and other nonlinear effects.

Flexible use options
Like all T-RackS processors, the individual T-RackS Tape Machines offer two ways to work: as a single plug-in, or inside the T-RackS 5 shell. The T-RackS Shell allows users to combine any of the 43 T-RackS processors in a single instance. Create custom combinations of processors, using both series and parallel routing, that take up only a single plug-in spot in any DAW and can be saved and recalled for lightning-fast workflows. This Shell offers offers a unique, modular system with up to 16-processor chains, easy A/B/C/D comparison, up to 192 kHz / 32-bit floating point processing and much more, and works as both a plug-in and stand-alone mastering application.

T-RackS 5 is the latest version of IK Multimedia's mixing and mastering software workstation now available for more than 20 years. This powerful modular system offers maximum versatility via 43 high-quality processors (EQs, limiters, compressors, etc) that can be used in parallel or series, in a variety of working environments. In total, T-RackS 5 offers everything needed to professionally treat and finalize audio from raw mixes to a perfect finished product. For even more professional results, each version of T-RackS 5 also offers free downloadable signature presets from some of the industry's top engineers.