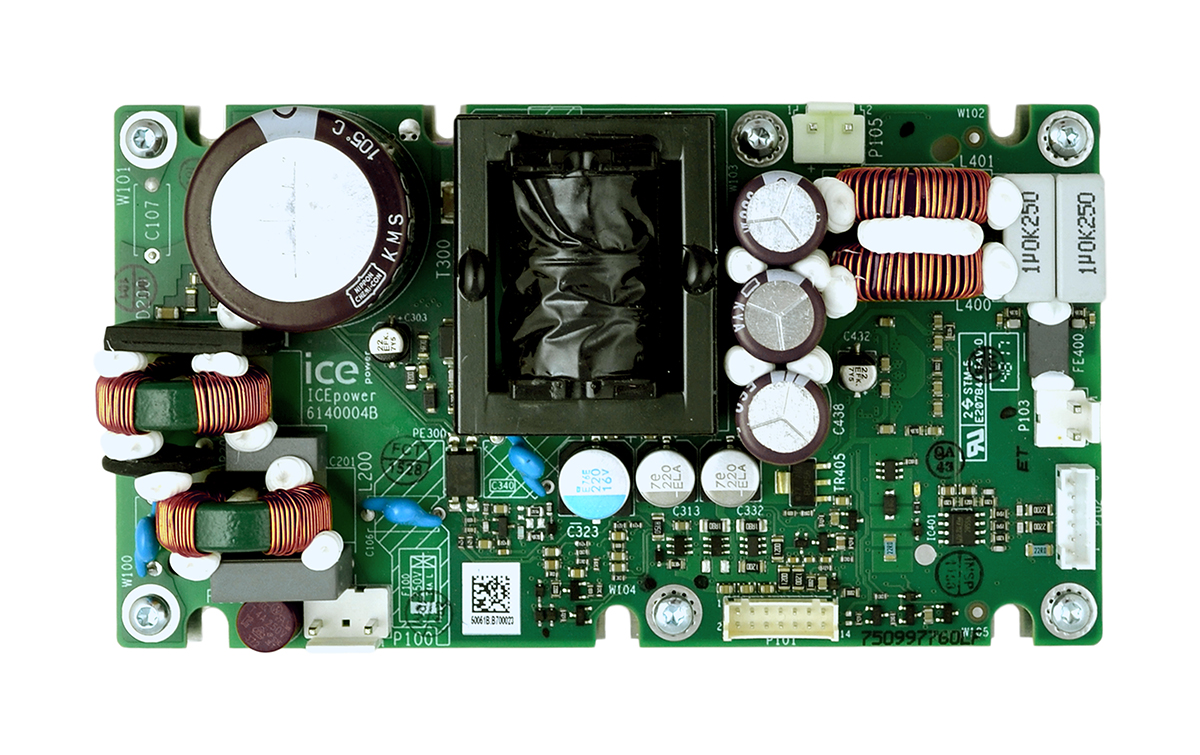 According to the Danish company, this is a product that was born directly from the wishes of their own employees. "We believe in the power of music. Our day time job is designing great performing audio solutions and power electronics. In our spare time, most of us are hobby musicians, mainly guitarists and bass players," they state.

When designing a new solution that they could use, ICEpower looked carefully at market trends and the resulting briefing details: "In the past, large tubes and heavy transformers were an integral part of a guitar amplifier. The sound of heavily clipped and overdriven tube amplifiers has defined the rock genre for generations. Today, transistor amplifiers have long since eclipsed tube amplifiers in terms of performance and reliability and have been broadly accepted in the guitar community. The new paradigm of guitar amplifier design is to create the unique “sound” in the pre-amplifier section and then use a neutral sounding power amplifier for driving the speaker. Examples include tube pre-amplifiers combined with solid state output power stages. Other examples include advanced modeling amplifiers, where Digital Signal Processing wizardry is used to model the sonic characteristics of a wide range of amplifiers.

"This has spawned a new and growing trend in guitar amplifiers known as FRFR (Full Range Full Response). Basically, this means that the creation and shaping of the unique “sound” is done in the pre-amp or effects processor, while the power amplifier and speaker cabinet is as sonically neutral and transparent as possible. This allows guitar players an unprecedented flexibility in terms of the types of sound that can be created with just a single amplifier + cabinet. This has been the trend for some time in bass amplifiers, but is now also happening in the guitar market. Whereas the use of cooling fans has long been accepted in the bass player community, no one wants a fan in a guitar amplifier."

"Many times, with electrical guitars, there can be a large amount of effect processing applied to the guitar’s output. The signals fed to a guitar amplifier can be heavily distorted and compressed, resulting in very low crest factors. This puts challenging requirements on the power supply and thermal design of the amplifier." 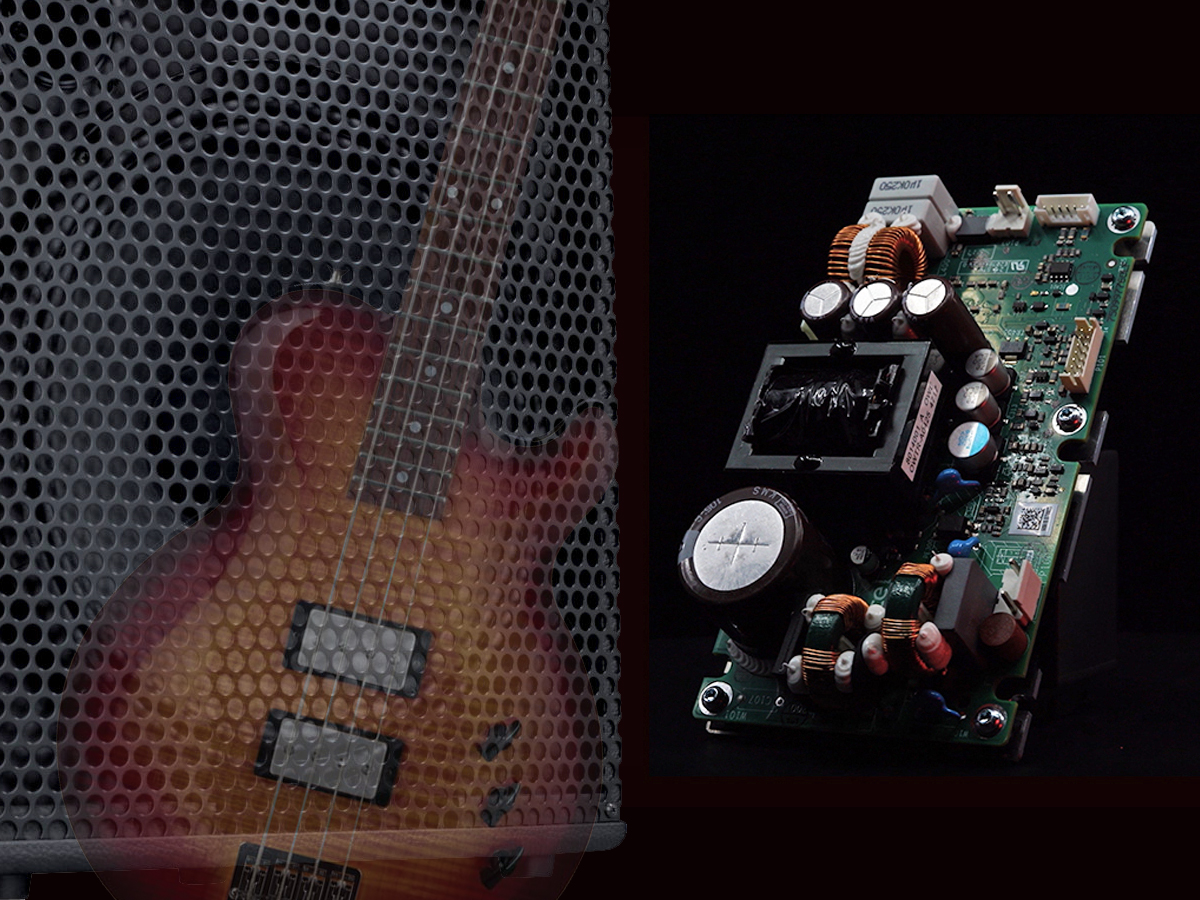 For those about to rock!
The 200AS1 and its smaller siblings, the 100AS1/2, have been uniquely designed for guitar amplifiers, bass amplifiers and subwoofers without the need for forced cooling. The 200AS1 is designed with an “overbuilt” and extremely heavy-duty power supply and a convenient thermal cooling interface through the base plate. This enables it to handle even the most heavily distorted, clipped and compressed signals, without the need for a fan.

The 200AS1 features an extremely capable fly back power supply with a power supply of 300W, combined with a 1x 200W (4Ω) class D amplifier. The power supply is designed with universal mains and includes ErP and Energy Star compliant standby functionality, regulated auxiliary power supplies, wake on signal sense and a DC-bus output.

Utilizing the same topology as the 100AS, the 200AS1 has the exact same input gain, mechanical dimensions, mounting hole pattern, electrical interface and connectors, as the 100AS1 and 100AS2. This makes it easy and convenient to create a series of products, using the same power platform.

The use of a regulated power supply topology ensures consistent power performance globally across both low and high mains. Reliability has also been a key focus in the 200AS1 development. This has been achieved through careful design, use of brand-name components, meticulous testing and burn-in in mass production. Like all other ICEpower products, the 200AS1 modules goes through a comprehensive functional test before delivery.

Hasn’t the massive power supply, reliability and flexibility skyrocketed the price of the 200AS1 module? Absolutely not, if you ask ICEpower’s Mads Emil Solgaard, Director of Sales and Marketing: “You have to keep in mind who the end customer is. Whereas celebrity stars can afford to pay whatever for the latest technology, most guitar and bass amplifiers are bought by young people on a budget."

Both the 100AS and 200AS have therefore been designed for maximizing power, performance and reliability, while keeping the cost at a level that makes the technology available to a broad scope of musicians.

Besides the actual product cost, the 200AS1 power module has been designed with attention to cost through the entire product life cycle. For example, to speed up time to market and reduce the product development cost of manufacturers, ICEpower added all system and housekeeping functions onto the 200AS1 module. "This means, that manufacturers don’t need to spend time and money developing them on their own. The built in Universal Mains power supply also eliminates the need to stock both 115V and 230V versions, thereby halving the necessary stock and saving money. This makes the 200AS1 competitive, not only on performance, but also on price," Solgaard adds.
www.ICEpower.dk
related items