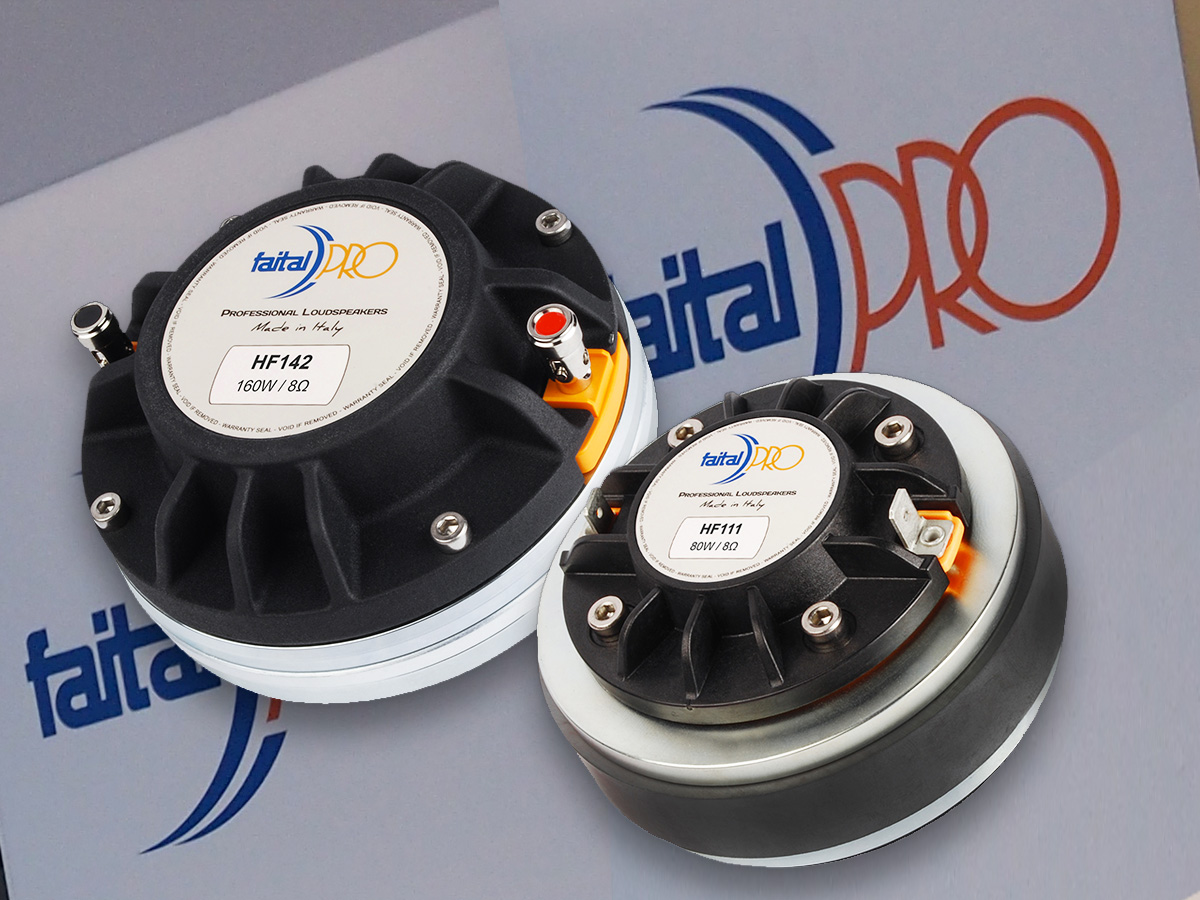 According to FaitalPRO, the two new compression drivers have been designed to respond to the need of "on the road" speakers, with a minimum total weight and superior performance.

The new FaitalPRO ferrite HF compression driver HF111 has a very interesting cost, and is characterized by deliberately balanced parameters (controlled) so as to make it implementable in many applications. Its medium-small size features a 37mm voice coil and 1” throat. The diaphragm is dome-type in Ketone Polymer and the ferrite magnetic circuit is optimized to achieve high performance in terms of efficiency.

The new HF111 completes the range of FaitalPRO's compression drivers with 37mm voice coil and constitutes a new alternative in respect of existing drivers with annular 4 slot phase plug and equal coil size, HF104 and HF105.

Obviously, the performance characteristics are different with license nominal data that indicates an efficiency of 107 dB, an excellent frequency response from 2 kHz to 20 kHz, and a good applicable power of 40 W with a maximum of 80 W AES.

Designed for use in two-way systems with a horn to match the 1" throat and multi-purpose applications, in multi purpose systems, with a 10" companion woofer. Given the very linear response and extension to the highest frequencies, it can also be indicated for use in small dimensions line arrays.

"At the design stage we wanted to create a driver with a very smooth and extended response at higher frequencies, with a controlled tone, from soft, tending to "sweet". In addition, on the typical style of our ferrite drivers, the new HF111 is part of a product range based on a very attractive cost," says Flavio Naggi, Pro Audio Division Manager.

FaitalPRO HF142
The HF142 is the new large top of the range driver from FaitalPRO, with a 65mm coil, 1/4" throat, dome-type and magnetic circuit with a neodymium ring. Like all FaitalPRO drivers, it has high efficiency and frequency extension characteristics, thanks to the Ketone Polymer membrane and an innovative 4-slot phase plug.

"This new driver completes a series of products for high frequencies with 65mm coil, optimizing the overall dimensions, but definitely not at the expense of the performance. We are therefore in the presence of a driver that is capable of handling very high power, 80W continuous and maximum 160 W, with an efficiency of 110 dB, a useful range of from 900 Hz to 18 kHz. The minimum recommended crossover cut is 900 Hz," adds Flavio Naggi

Suggested applications are in large monitors, two-way, alongside a 1.4" horn and a large, 12 or 15-inch woofer. The new driver was also designed to respond to the needs of a modern line array with waveguide, flanked by a woofer or a midrange of large dimensions, an 8" mid or directly with a low driver, 10", or 12".

The adoption of a 4 slot phase plug and a rather regular frequency response make it a very effective driver in multi purpose sound applications, with "a gentle and non-aggressive tonality", according to FaitalPRO. It re-proposes, in fact, the "mood" of the other drivers in the catalog with similar-sized coil, but with considerably reduced dimensions, to the benefit of those installations where these factors make the difference.

"These two new drivers are created for applications from the highest level of quality and, being able to withstand high electrical powers, are perfect when used on large systems where high sound pressure levels are needed," confirms Flavio Naggi.

FaitalPRO also presented a noteworthy improvement on HF compression drivers neodymium Dome Titanium throughout the company's range with a 74mm voice coil. At Prolight+Sound 2017, FaitalPRO confirmed mass production of a "stabilized" titanium dome. The innovation consists of a specific treatment on the outer diameter of the clamping of the diaphragm suspension. This process and the material treatment implementation ensures even more stability and linearity in the response.

It is applied to all existing models with a Titanium diaphragm with 74mm voice coil in the brand's catalog, and it will be gradually introduced in all deliveries in subsequent months.
www.faitalpro.com
related items