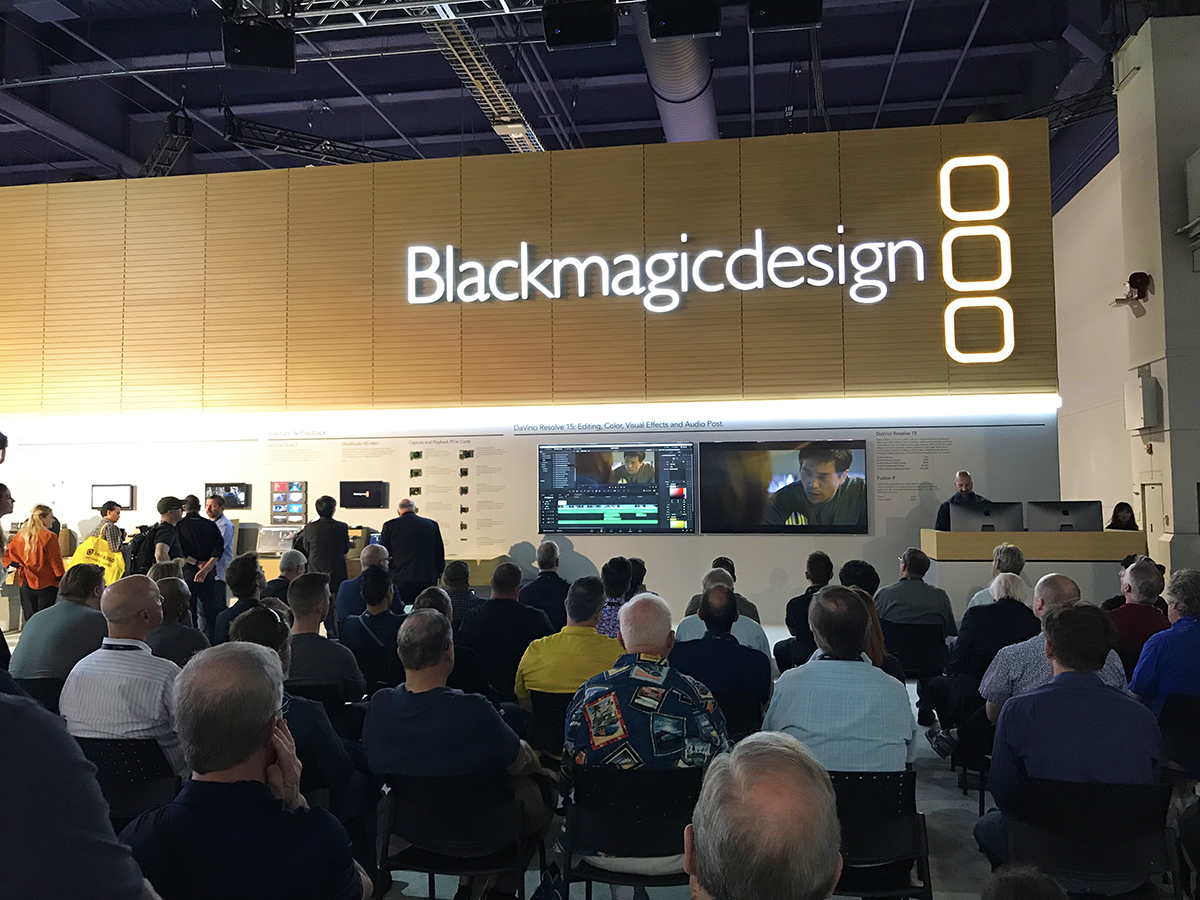 Blackmagic Design new DaVinci Resolve 15 is a massive update that fully integrates visual effects and motion graphics, making it the world’s first solution to combine professional offline and online editing, color correction, audio post production, multi user collaboration and now visual effects together in one software tool. DaVinci Resolve 15 adds an entirely new Fusion page with over 250 tools for visual compositing, paint, particles, animated titles and more. In addition, DaVinci Resolve 15 includes a major update to Fairlight audio, along with over 100 new features and improvements that professional editors and colorists have asked for. And the best part is that it's free, with the fully featured version costing only $299.

The free version of DaVinci Resolve 15 can be used for professional work and has more features than virtually every other paid application for post production. DaVinci Resolve 15 Studio, which adds multi user collaboration, 3D, VR, dozens of additional filters and effects, unlimited network rendering and other advanced features such as temporal and spatial noise reduction, is available to own for only US$299. There are no annual subscription fees or ongoing licensing costs. DaVinci Resolve 15 Studio costs less than all other cloud based software subscriptions and it does not require an Internet connection once the software has been activated. That means users don’t have to worry about losing work in the middle of a job if there is no Internet connection. 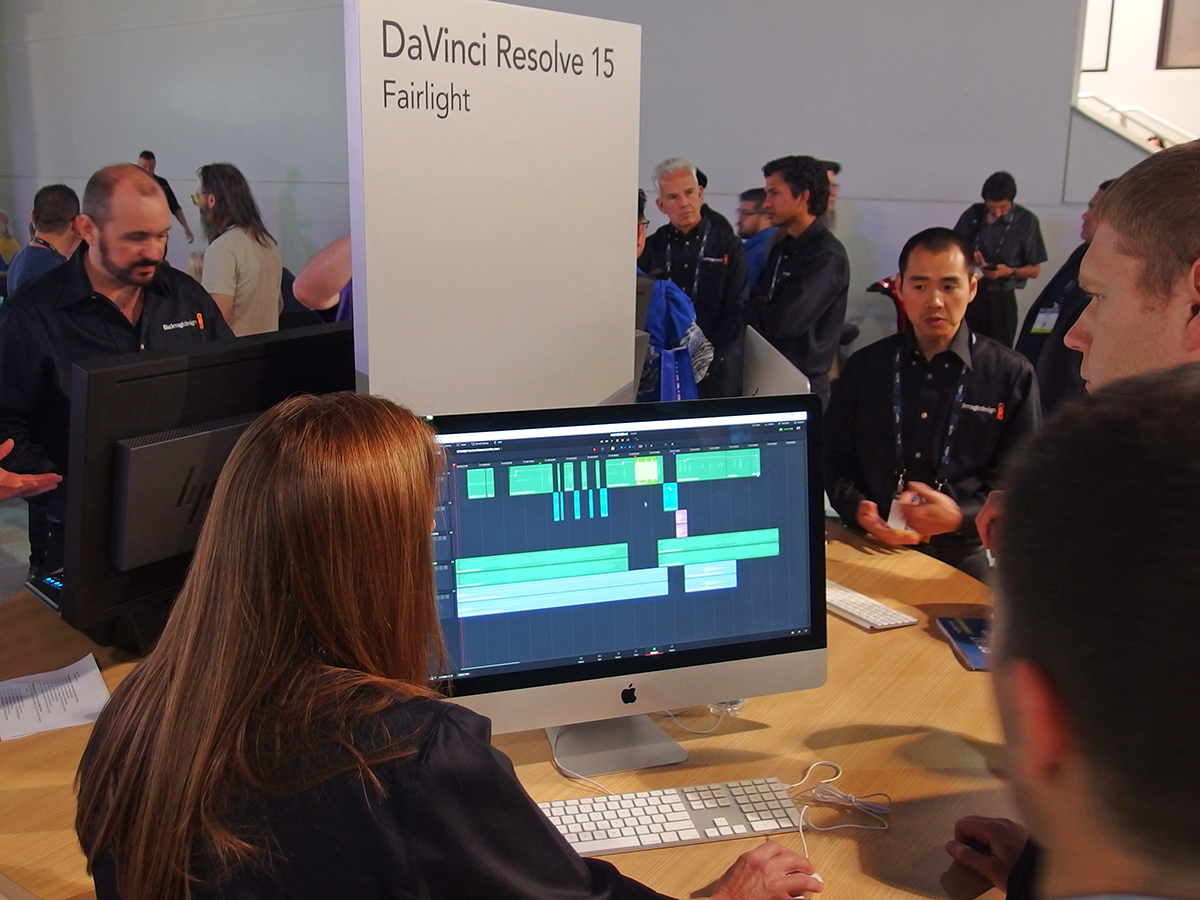 As Grant Petty, Blackmagic's founder and CEO likes to do, when his company completes an acquisition, it quickly optimizes and integrates the technology and updates hardware, making it available in packages that not only makes sense for users and the industry in general, but they quickly become part of an integrated solution, available at the best possible prices. And, most impressive of all, realizing everything that no other manufacturer seems to be able to do, like immediately making software available for every single operating system (in the case of Resolve, for Windows, Mac and Linux), while supporting every single format and resolution the market needs.

In this regards, DaVinci Resolve 15 truly revolutionizes post production by combining 4 extremely high end applications as different pages in one single piece of software. The edit page has all of the tools professional editors need for both offline and online editing, the color page features the world’s most advanced color correction tools, the Fairlight audio page is designed specifically for audio post production and now becomes a fully featured multitrack recording and editing tool, while the new Fusion page now adds visual effects and motion graphics,  combining everything needed to create feature film quality effects and animations. All it takes is a single click to instantly move between editing, color, effects and audio.

This gives users unlimited creative flexibility because they can learn and explore different toolsets. It also enables collaboration so people with different talents can work together on the same project at the same time. An the DaVinci Resolve 15 collaborative workflow dramatically speeds up post production because users no longer need to import, export or translate projects between different software applications, and work no longer needs to be conformed when changes are made. Everything is in the same software application. 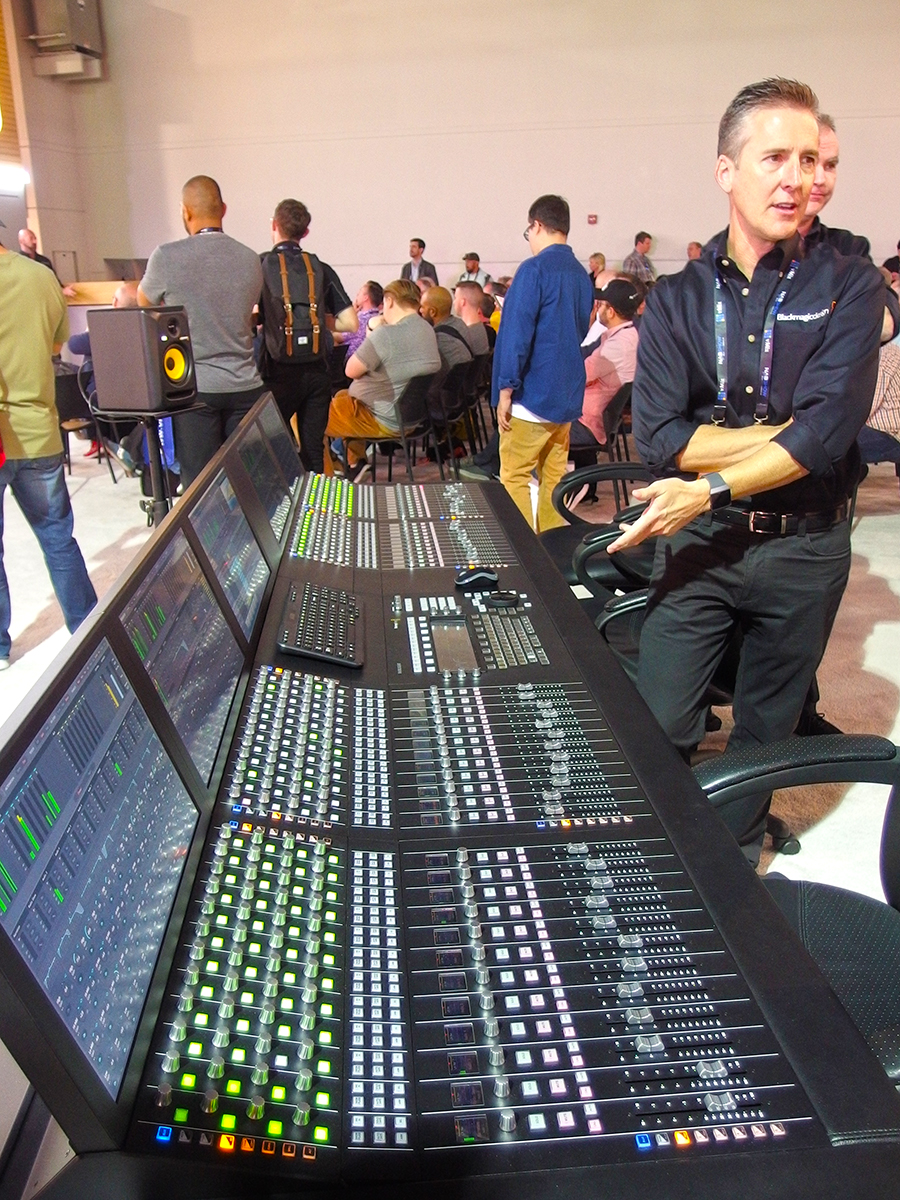 “DaVinci Resolve 15 is a huge and exciting leap forward for post production because it’s the world’s first solution to combine editing, color, audio and now visual effects into a single software application,” says Grant Petty. “We’ve listened to the incredible feedback we get from customers and have worked really hard to innovate as quickly possible. DaVinci Resolve 15 gives customers unlimited creative power to do things they’ve never been able to do before. It’s finally possible to bring teams of editors, colorists, sound engineers and VFX artists together so they can collaborate on the same project at the same time, all in the same software application!”

Detailing the innovations
In addition to bringing Fusion into DaVinci Resolve 15, Blackmagic Design has also added support for Apple Metal, multiple GPUs and CUDA acceleration, making DaVinci Resolve faster than ever. To add visual effects or motion graphics, users simply select a clip in the timeline on the Edit page and then click on the Fusion page where they can use Fusion’s dedicated node based interface, which is optimized for visual effects and motion graphics. Compositions created in the standalone version of Fusion can also be copied and pasted into DaVinci Resolve 15 projects. 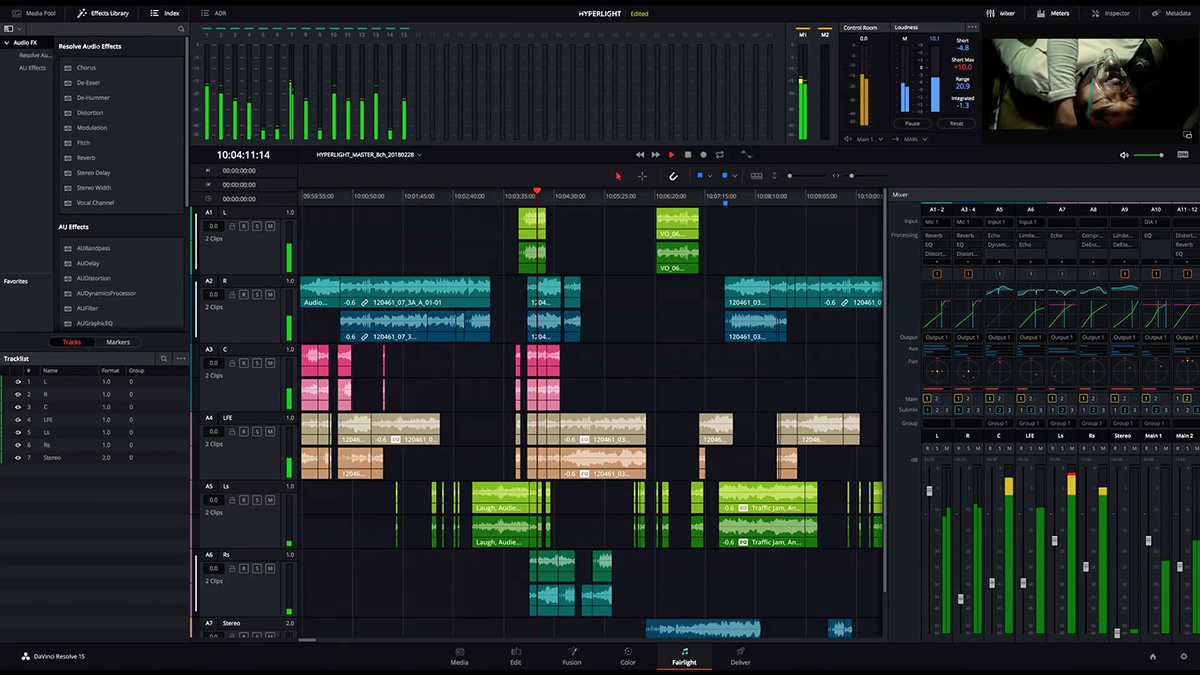 On the audio front, DaVinci Resolve 15 features a huge update to the Fairlight audio page. The Fairlight page now has a complete Automatic Dialog Replacement (ADR) toolset, static and variable audio retiming with pitch correction, audio normalization, 3D panners, audio and video scrollers, a fixed playhead with scrolling timeline, shared sound libraries, support for legacy Fairlight projects, and built in cross platform plugins such as reverb, hum removal, vocal channel and de-esser. With Resolve 15, customers no longer have to worry about audio plugins when moving between Mac, Windows and Linux because the FairlightFX plugins run natively on all three platforms. 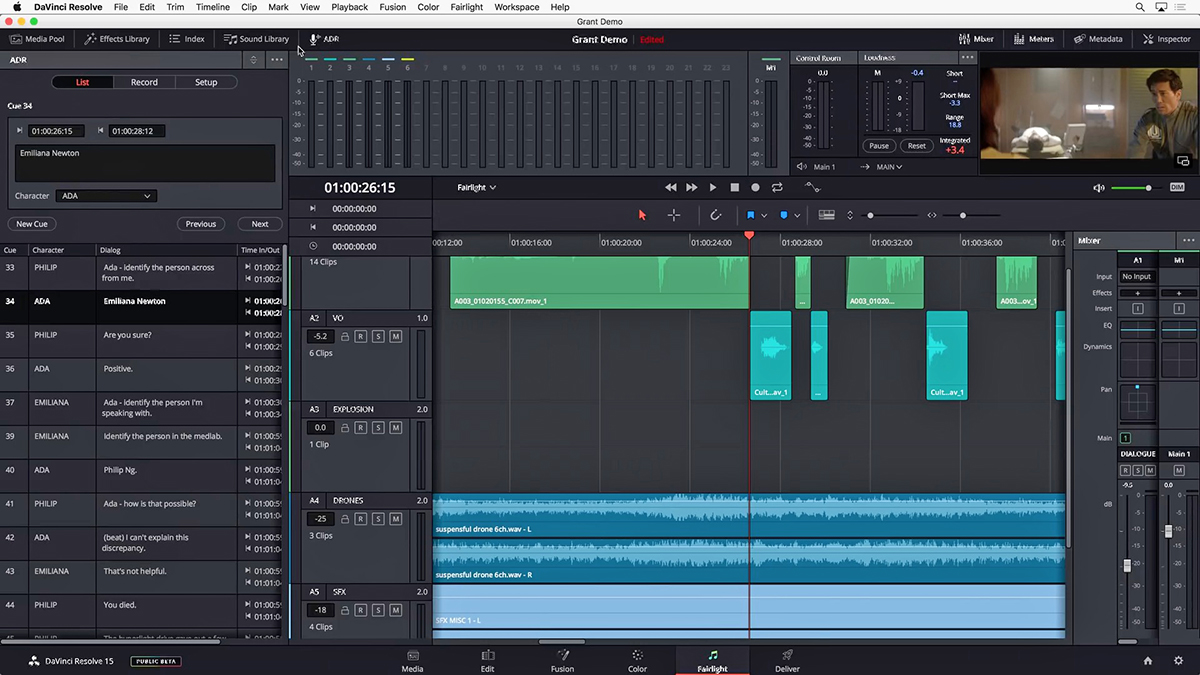 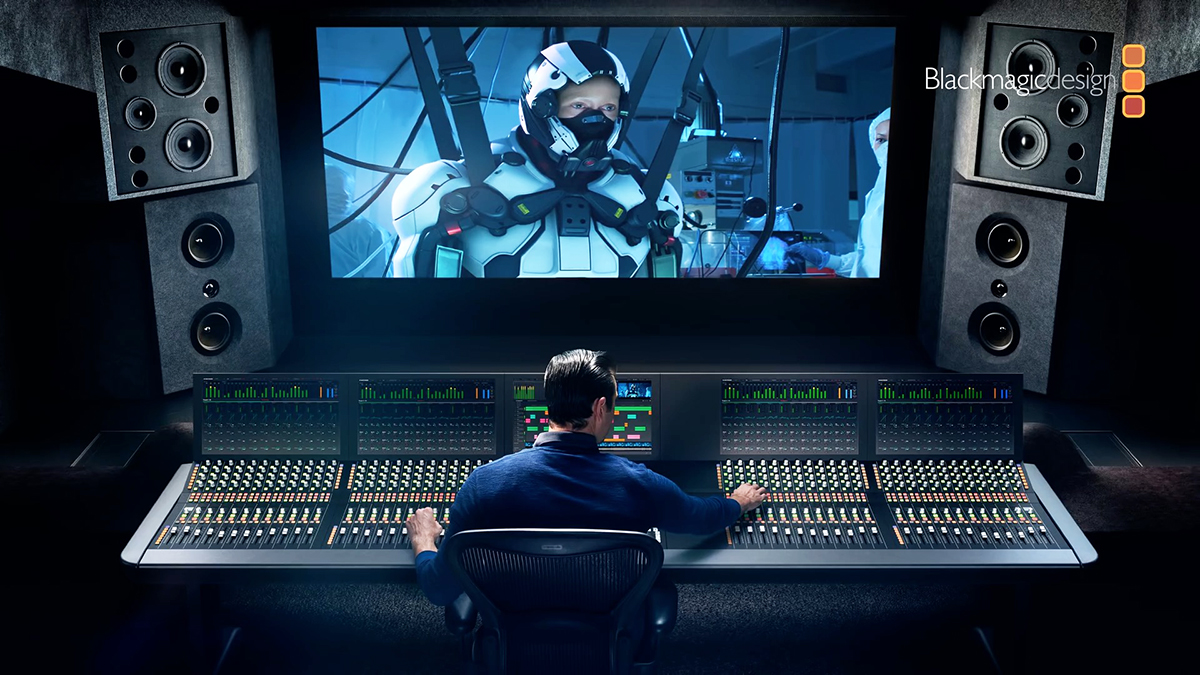 In addition, Blackmagic Design also introduced new Fairlight audio consoles for audio post production that will be available later in 2018. The new Fairlight consoles are available in 2, 3 and 5 bay configurations. These are hardware modules with quality finishes - as with all Blackmagic hardware - using modern components and technologies, including an amazing monitor that can accept both video and Ethernet inputs. Prices for the new Fairlight control panels are approximately 80% less than the previously available panels with prices ranging from US$21,995 to US$48,995. 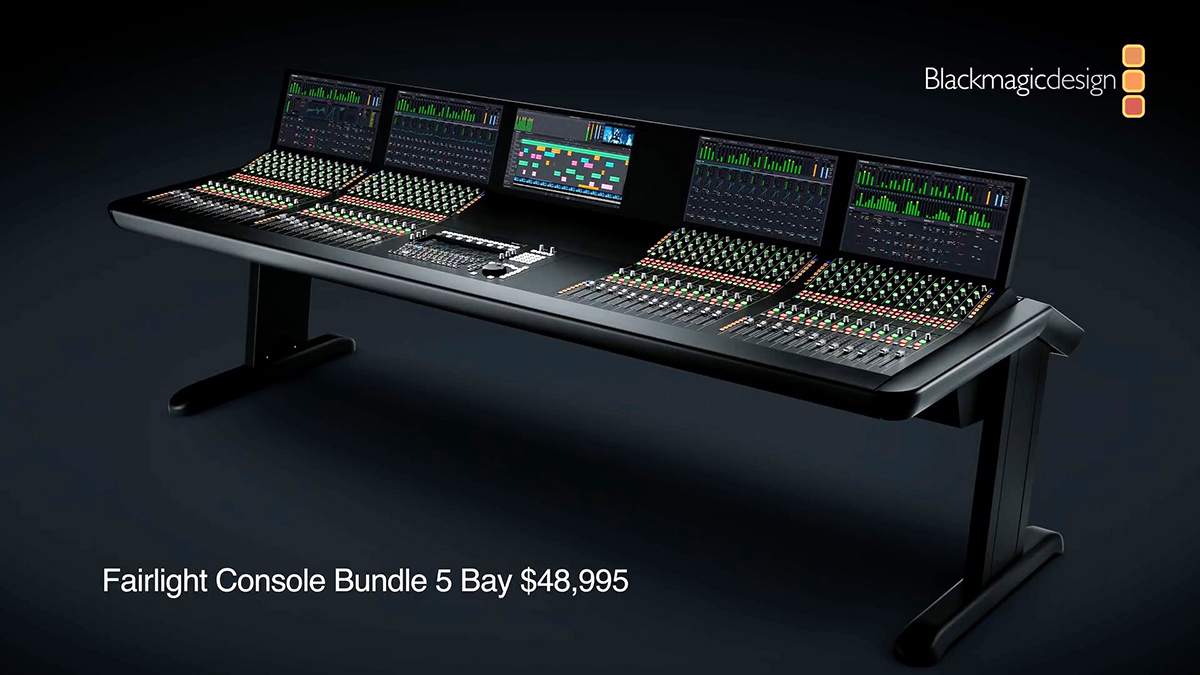 The advanced Fairlight monitoring system handles buses up to 24 channels wide. Sources can be selected from internal buses or external inputs and sent out to 16 different sets of speakers. And users also get customizable fold-up and fold-down when crossing between formats. For example, a user monitoring 5.1 on a pair of stereo speakers, automatically folds down for output to 2 channels. For cinematic setups, user can add an optional B-Chain processor for installations with up to 64 speakers! 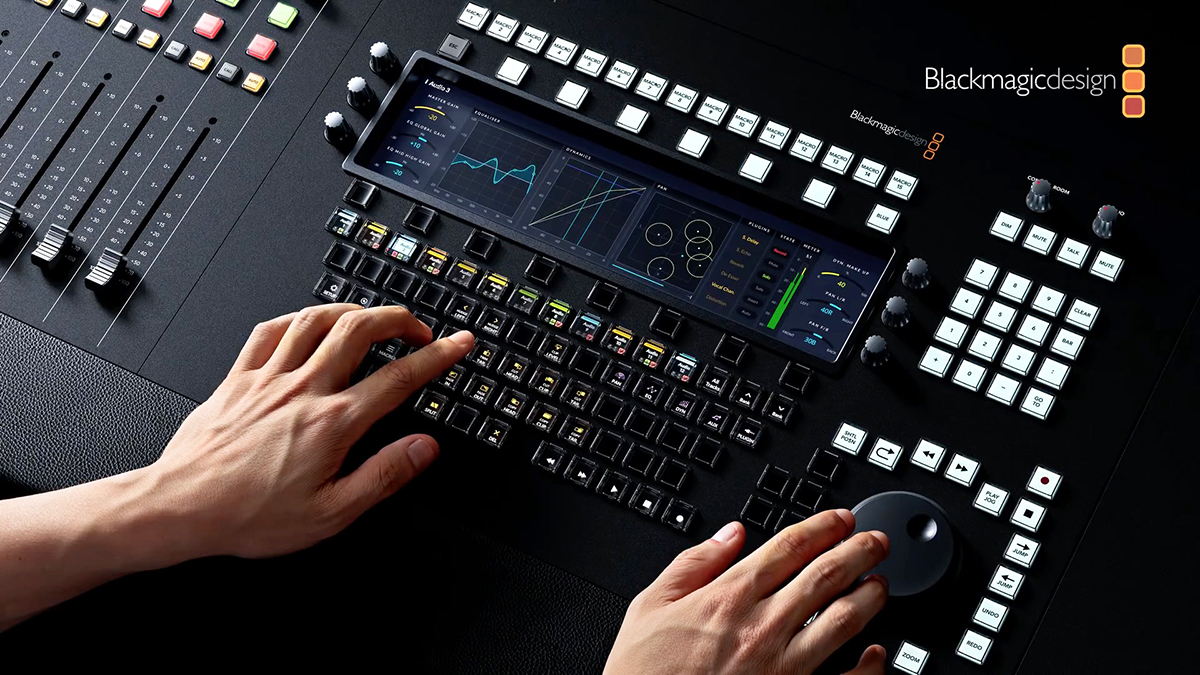 In the new Fairlight console modules we have also seen the new visual monitors, which are ideal for real time control of dynamics and effects processing, mixing, and especially for 3D audio soundspace work with advanced spatial audio formats. The new updated Resolve 15 software, working directly with the Fairlight audio consoles now features improved 3D audio support for working with spatial formats such as 5.1, 7.1 and even 22.2. Users get a 3D panner to position sound in space, 3D B-chain processing and 3D Spaceview visualization which provides a clear view of each object’s location in space.

A public beta of DaVinci Resolve 15 is now available for immediate download from the Blackmagic Design website. The Fairlight consoles will be available later this year and will be priced from US$21,995 for the Fairlight 2 Bay console.
www.blackmagicdesign.com
related items