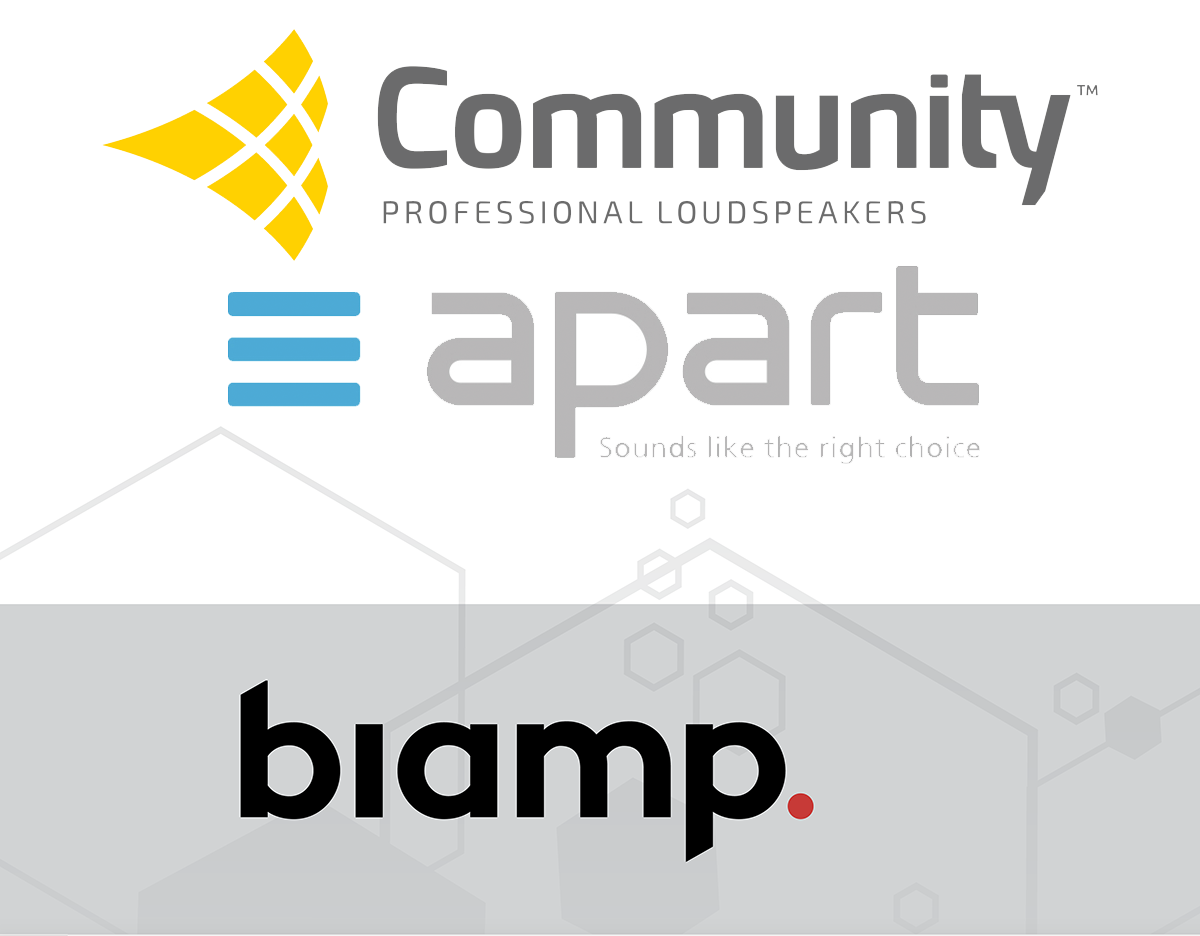 Apart Audio, a Belgium company founded by Tom Gheysens in 1992, is a strong brand in commercial & leisure audio solutions for small and mid-size venues including retail, food service, education, and small offices. The company offers a broad array of speakers as well as amplifiers, mixers, controllers, and paging stations, which enabled it to establish a strong position in the installation market in Europe. In 2015, with the support of 3d Investors, a family owned investment company, Apart Audio expanded internationally with the successful acquisition of Community in the United States. The acquisition led to the creation of Audioprof Group International, composed of two subdivisions: Apart Audio and Community - two totally complementary companies.

Founded in 1976, Biamp's recent history is also one of sweeping changes, particularly since in 2017 the Oregon-based company was acquired by Highlander Partners L.P., a private investment firm based in Dallas, Texas. Highlander Partners' principal focus is on making direct and control investments in manufacturing, consumer products, and food and beverage products. In September of 2016, Highlander added Rashid Skaf, the former CEO of AMX (acquired by Harman), as a Senior Advisor to identify technology company opportunities. Following Biamp's acquisition, Skaf became President, CEO, and co-Chairman of Biamp.

After taking the helm at Biamp, Skaf declared the company would grow rapidly within its existing markets and enter entirely new segments using a combination of product line expansion and company acquisitions. Since then, Biamp has introduced several innovative new products including its resoundingly successful and award-winning Beamtracking microphones, and in December 2018, Skaf expanded Biamp's scope with the acquisition of Cambridge Sound Management (CSM), headquartered in Waltham, Massachusetts, and a pioneer in the fast-growing sound masking market, with an extensive range of solutions and integration know-how that perfectly complements Biamp's activities.

Already in 2019, Biamp appointed Mark Ureda, a former senior vice president at Harman Professional, as executive advisor. With more than three decades of combined leadership in professional audiovisual systems, Ureda plays a pivotal role in the execution of the company’s aggressive global expansion, which envisages expanding its presence in the conferencing and sight and sound reinforcement markets. In addition to his role as CTO and SVP of Harman Pro, Mark Ureda’s career includes terms as president of JBL and vice president of corporate strategy at Northrup Grumman.

Now, Community Loudspeakers and Apart Audio will join Biamp as product families within the company’s portfolio, "with business functions gradually being blended to form a single Biamp business," as stated by Rashid Skaf. “I am tremendously excited to complete this transaction. Building a comprehensive line up of speakers has been a priority of mine as we move to position Biamp as a full line provider of professional audiovisual solutions. Acquiring Apart Audio and Community Loudspeakers was my preferred route to accomplishing that quickly with incredibly strong and respected brands. The many products added to our portfolio give us powerful positions in several key growth markets for Biamp most notably retail, hospitality, restaurants, stadiums, and outdoor venues. With this move, Biamp has clearly established itself as a leader in the pro AV market,” he adds.

“I am thrilled that Community and Apart Audio are joining the Biamp family. The great product complementarity and geographical fit strengthen my belief that we are now part of one of the strongest and most respected AV solutions providers and that we will be able to offer best in class solutions to our channel partners and end users. I want to thank 3D-Investors for their hands-on support and guidance during the last ten years that helped our company grow into a worldwide installed sound specialist,” added Kris Vermuyten, CEO Apart Audio.