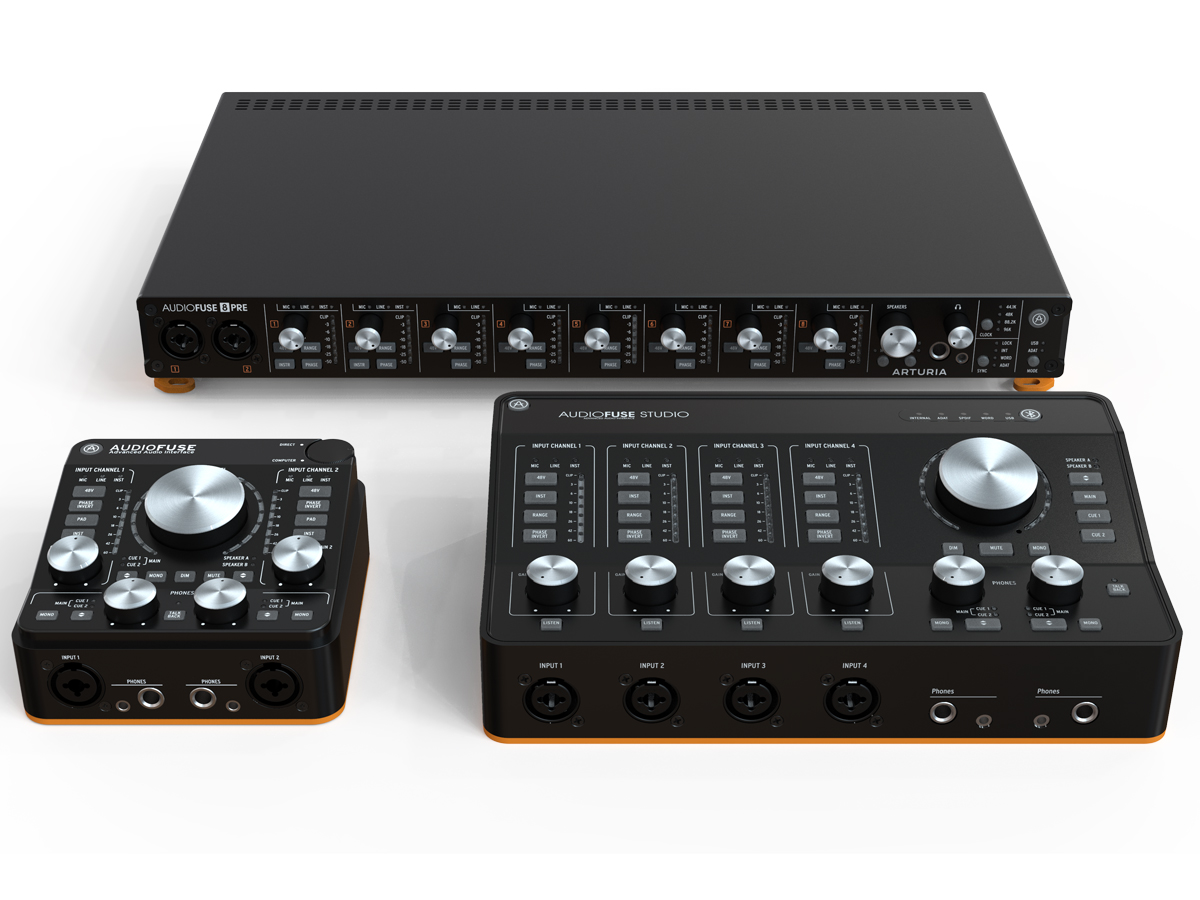 The two new units were displayed at the 2019 NAMM Show in Anaheim, and Arturia confirmed the new interfaces will be shipping in the Summer of 2019 and will include an interesting companion software collection.

It seems Arturia learned a few valuable lessons with the original AudioFuse. When designing the two new audio interfaces - AudioFuse Studio, and AudioFuse 8Pre - they have taken market feedback seriously, and have looked at ways to differentiate the new products, while making sure they would represent good value at a time when the industry is going through the instability of the USB/Thunderbolt 3 transition, with the market quickly adopting also Ethernet and AoIP alternatives for audio multitracking.

The two AudioFuse interfaces are high-end, feature-packed units that can serve from the bedroom musician to the pro studio engineer, adopting two different design approaches and combining a mix of workflow enhancing features and sound quality. Both models will offer access to the AudioFuse Creative Suite, a growing collection of superb software effects and instruments with perfectly emulated signal processing from iconic, vintage studio consoles and synths, in the best Arturia tradition.

The original USB 2.0 only AudioFuse is still available for $699 / 599 Euros (that's 100 USD/Euros more than originally announced and intended). This is a compact, two-preamp, portable interface that should be useful also for monitoring, but has proved to be too small and light to handle the weight of the cables to be practical. Also, as a USB 2.0 solution, there are dozen of much cheaper alternatives and even units with four preamps at lower prices from respected brands.

So, for the new AudioFuse Studio and 8Pre, Arturia has now implemented USB 3.0 and uses a USB Type C connector, even though it still adds three USB Type A connectors to expand the options to work with any system, whether on PC, Mac, or Linux without the need of special drivers. As the company confirms, this evolution to USB-C allows the AudioFuse Studio and AudioFuse 8Pre to benefit from lower latency (as low as 3ms), and much improved bandwidth, wile maintaining backward USB2 compatibility. The AD/DA converters are now 24-bit AKM premium series of the latest generation supporting at up to 192kHz sampling rate. 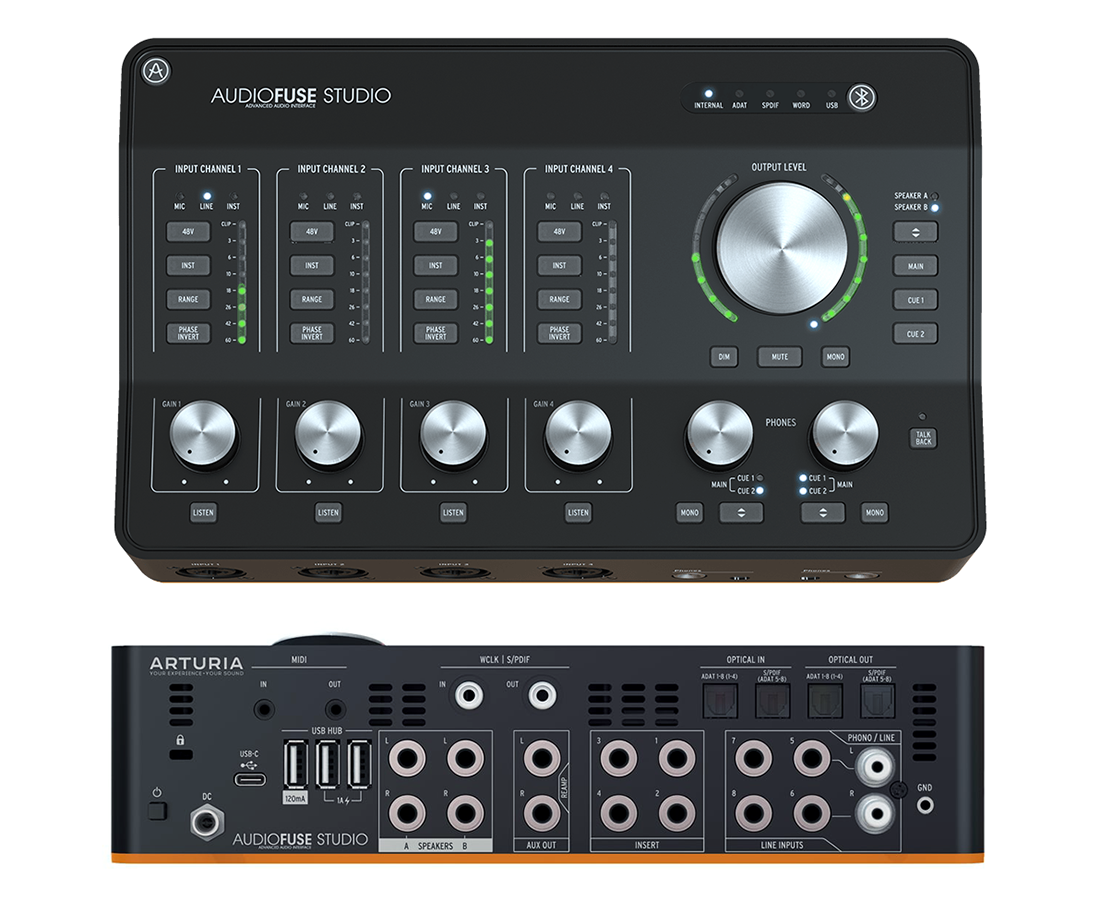 In terms of connectivity, the Arturia AudioFuse Studio is a flexible, adaptable 18-in, 20-out audio interface, with a Robust metal desktop chassis that is much larger and should withstand the weight of the connecting cables much better. The surface focuses on creative workflow for users tracking their music, allowing to A/B the mix on different monitor setups and even allowing to re-amp guitars directly to two independent analog line outputs, all with a one-button, one-function interface. There's a complete monitoring section with direct monitoring with ultra-low latency of the internal mixers and individual level control for speakers and two different headphones. Digital connectivity includes 8 digital ADAT inputs/outputs up to 96kHz, S/PDIF inputs/outputs, Word clock input, and output/thru on Cinch RCA.

According to Arturia, one of the main features should be the quality of the analog signal path and the four Discrete Pro preamplifiers with fully independent Mic/Line circuits, almost 120dB of dynamic range, super-low Equivalent Input Noise (less than -129dBu) and a huge 72dB input gain, enough to drive even the quietest ribbon microphones. And to offer the latest in convenience and connectivity, Arturia adds a Bluetooth receiver so users can pair it with their phone or tablet and stream music, or track directly from the incoming stream. The Bluetooth receiver supports the highest quality AAC and aptX codecs.

And two of the 8 analog input channels can also be used as a dedicated phono input with integrated RIAA preamp, allowing users to listen to or sample vinyl straight from a turntable. The 4 front-loading inputs feature a combi-jack connection, to be used either for microphones or line-level instruments. Inputs 1 to 4 also feature dedicated insert points, so users can set up 4 unique signal chains at the input stage and record the processed audio. 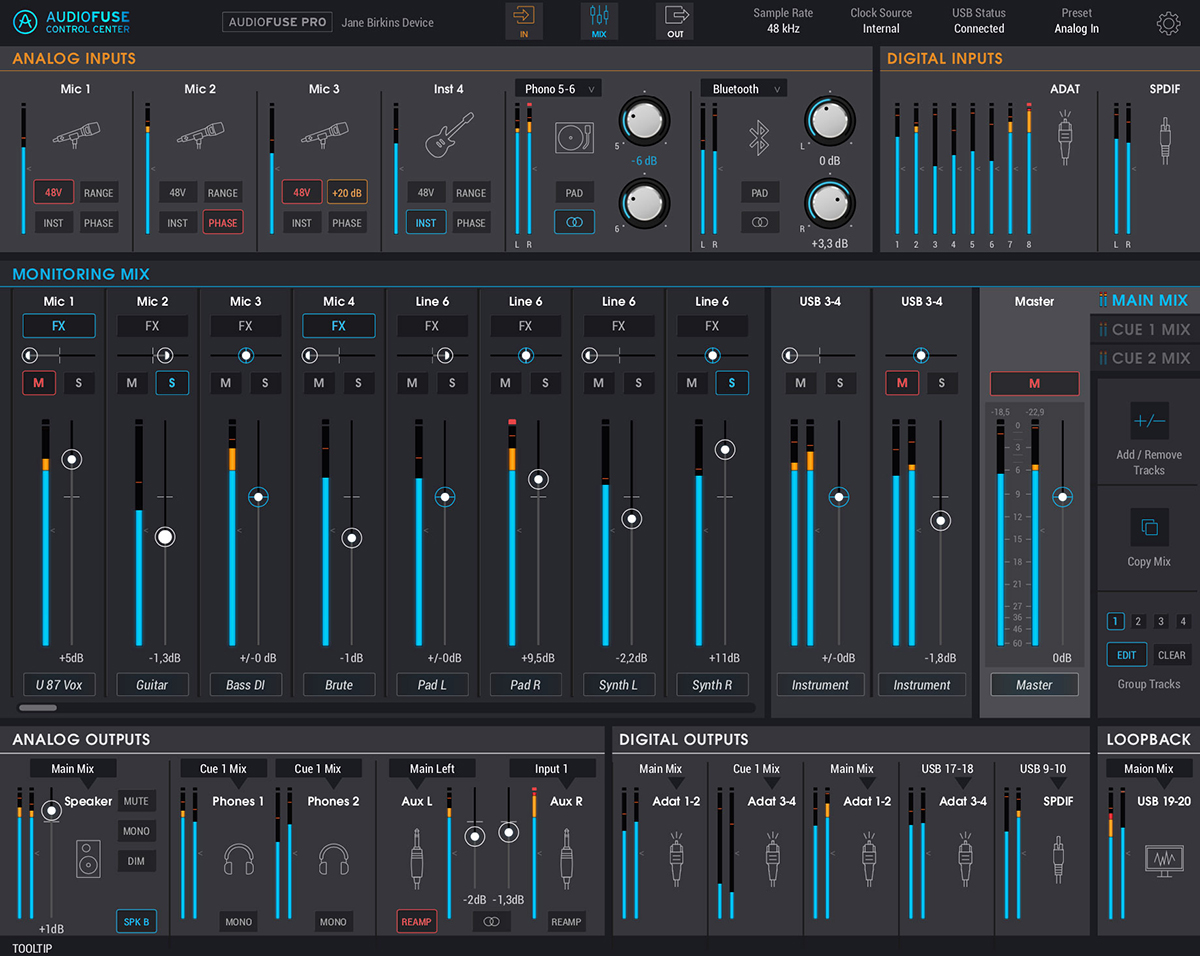 To assist on the configuration of all the AudioFuse Studio interface - and any of the other models - Arturia designed the AudioFuse Control Center (AFCC) software for Mac and PC. Once it's connected to a computer, AudioFuse transforms into a full-featured mixing console and the software controls the mixer, selection of inputs, routing, monitoring, and additional functions such as sampling rate, Clock Source, Pad, Cue, and more. Another useful touch is that AudioFuse will remember the latest AFCC settings for standalone use until the next time the user connects and changes them.

AudioFuse 8Pre
Following the same hardware specifications and architecture, the new AudioFuse 8Pre interface ($799 / 699 Euros) features a different rack-mount design with an 8 channel dual mode interface/ADAT expander. This allows users to expand their existing ADAT-enabled interfaces with 8 DiscretePRO analog preamps, or use it as a dedicated USB-C interface, with speaker outputs and independent headphone output. Two AudioFuse 8Pre units can be cascaded together via ADAT for 16 channel applications and the interface includes also the AFCC software for programming and control, as well as the AudioFuse Creative Suite bundle.
www.arturia.com
related items