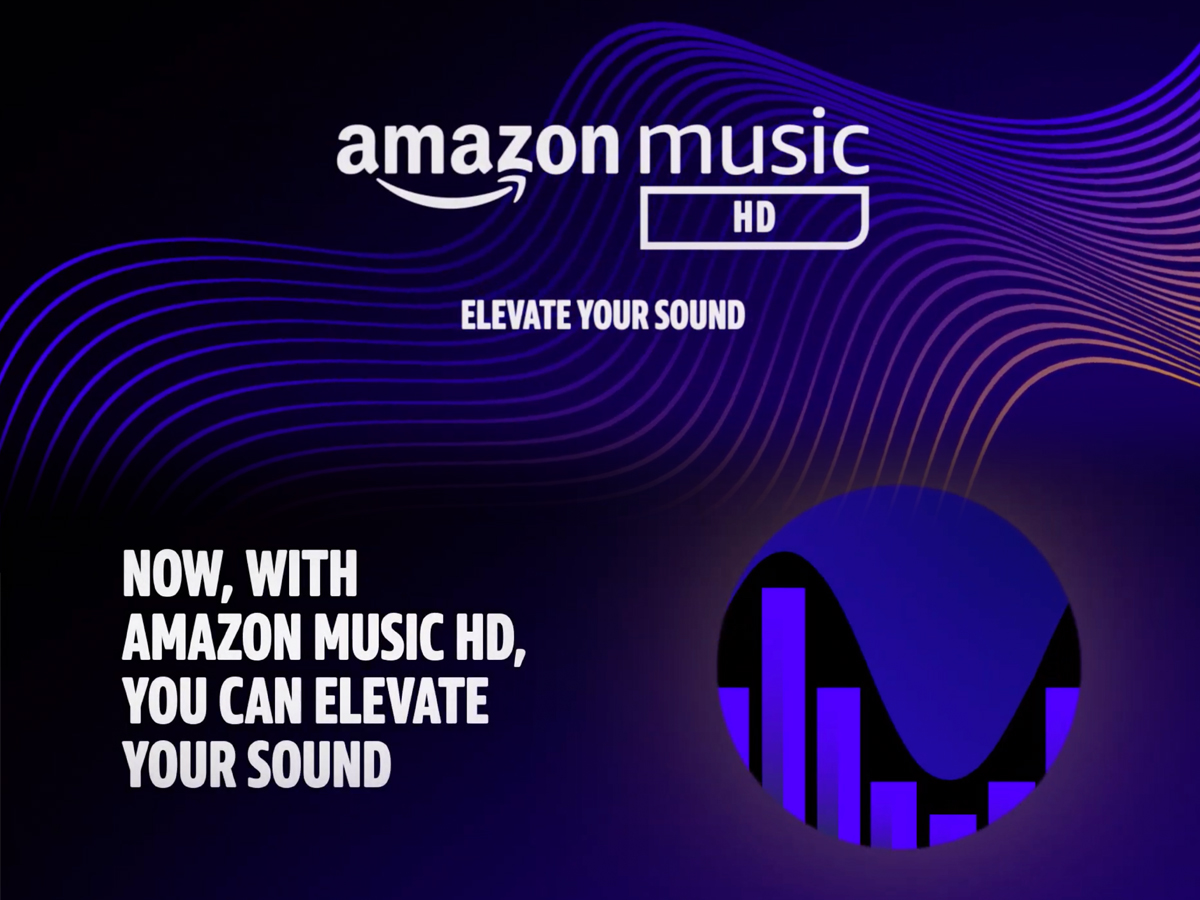 The announcement from Amazon Music is not surprising and in fact intends to finally convert what was essentially a mediocre service that started as Amazon MP3, into a revenue-generating service, competing with global leaders Spotify and Apple Music. Until now, Amazon Music essentially only offered streaming in the lowest possible quality (files encoded in the discontinued MP3 format) to an inherently non-paying subscriber base of Amazon and Amazon Prime customers. Of course, like any other commercial music streaming service, music files available at 24-bit and up to 192 kHz are only a very small percentage, given the fact that Amazon Music depended mostly from music submitted via aggregator services, with variable quality, from basic WAV 16-bit/44.1kHz (CD-quality) to actual 24-bit/96kHz high-resolution masters - long required by Apple in its "Mastered for iTunes" service, now rebranded as Apple Digital Masters, and which ensures that files submitted are in fact HRA masters and not simply upsampled material.

What is truly significant is the adoption by Amazon of FLAC lossless streaming for both CD-quality (calling 16-bit/44.1kHz quality "High Definition" is certainly ironic) and HRA material, recently pioneered by Qobuz, but now available at a much larger scale. Promising to be able to stream FLAC HRA at mass-scale to Amazon's vast user-base, much of which will be accessing the service via smartphone and highly-constrained celular networks, is certainly a bold move and only possible because Amazon knows that the subscribers to their "Ultra HD" options will not really be able to tell when the service "variably adapts" to existing bandwidth, and starts in fact only streaming CD-quality - or possibly even reverting back to MP3 quality. As Amazon clearly states, "Amazon Music HD will play the highest quality audio the customer’s device and network conditions will support."

Like what we've witnessed with Qobuz, streaming in FLAC usually relies on the maximizing the amount of file-buffering, whenever the service allows, in order to ensure that the user experience is less-often compromised. But unless the user has already stored a complete playlist on its device, commuting to work and taking the subway will certainly not ensure the possibility of real-time streaming at the required FLAC bit-rates. That is also the reason why such "higher-quality" services require a dedicated app and are not supported on web-browser players.

Also interesting is the marketing claim of "the highest quality streaming audio available," which will easily be discarded by the early adopters of high-resolution audio and millions of music enthusiasts that have already subscribed to the high-quality streaming options offered by Tidal, Qobuz, Deezer and other highly-focused specialized music services. If anything, this new initiative by Amazon will certainly contribute for mass-scale awareness that a "better quality" tier of music streaming exists - even if 99% of those users will never be able to tell the difference from an AAC-encoded streaming option when listening on their cheap earbuds and portable speakers. This will, hopefully, put pressure upon Apple and Spotify to follow suit and finally "release" their own better-quality options - and we know Apple is in fact the service that holds the larger quantity of "assured" high-resolution masters.

In another perspective, the new Amazon Music HD and the promotion of the virtues of a "lossless FLAC" option is the biggest possible danger for the MQA format and the whole MQA strategy that Tidal and other streaming services adopted. MQA currently offers the best "authentication" assurance for consumers that the files are effectively the best existing file master, and MQA even offers many recently "remastered" versions of analog recordings which are vastly superior to the existing CD-encoded material from the eighties and nineties. The problem is, not only MQA has done very little to actually explain what it does in the remastering process to the professional community, but the whole MQA unfolding of the master quality remains an extremely complicated message that consumers will never be able to fully understand (even professionals struggle with it...). 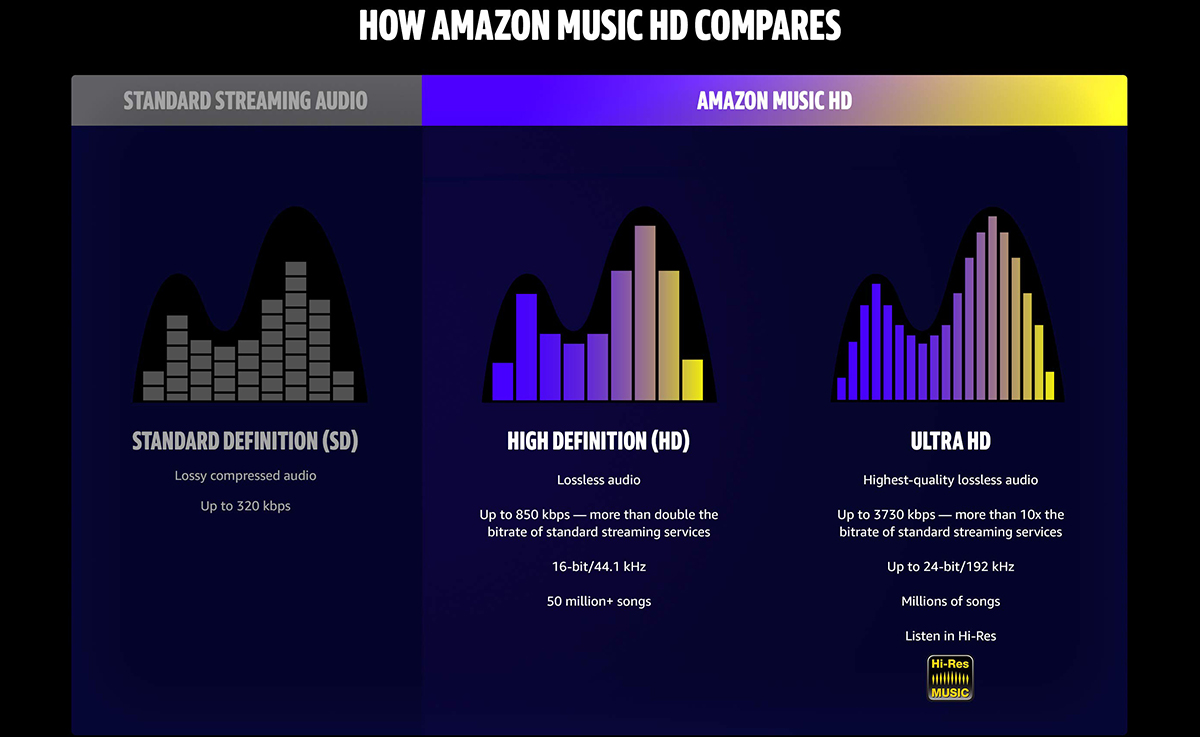 In fact, Amazon's approach to promote the new Amazon Music HD options, was largely inspired by MQA's own campaigns and even capitalizes on the early efforts around High Resolution Audio and High Resolution Music, promoted by the recording industry, and pioneered by Neil Young and its Pono venture. Amazon even quotes Neil Young when he stated: “Earth will be changed forever when Amazon introduces high quality streaming to the masses. This will be the biggest thing to happen in music since the introduction of digital audio 40 years ago.”

“We spoke with many artists while developing Amazon Music HD, who were excited about the potential for fans to be able to stream their favorite music, and hear it as it was originally recorded,” says Steve Boom, VP of Amazon Music. “From rock to hip-hop to classical and pop, we believe listening to music at this level of sound will make customers fall in love again with their favorite music and artists. As we usher in a new listening experience for our customers and the industry, we’re combining the convenience of streaming with all of the emotion, power, clarity and nuance of the original recordings.”

And in many ways, the promotional message for Amazon Music HD doesn't hide the fact that subscribers to the new best-quality options will in fact benefit first and foremost from recent classic album remasters like Fleetwood Mac’s "Rumors" and Miles Davis’ "Kind of Blue" which are effectively "revelatory new experiences," while recent material like Kendrick Lamar’s “Alright” and St. Vincent’s “Digital Witness,” now "available in Ultra HD," are effectively the result of the artist's own desire to offer the best possible master quality of their recordings and where distributed as 24-bit/192kHz masters only.

An interesting initiative by Amazon on the Amazon Music HD promotion includes the direct involvement of hardware manufacturers that support HRA playback directly mentioning "most products from Denon and Marantz with HEOS Built-in, Polk Audio, Definitive Technology, Sonos, McIntosh, Sennheiser, and many more (see pictured list above). And it's also important to mention that this Amazon Music upgrade was announced a few days before a scheduled September 25 event, where Amazon is expected to unveil updated Amazon Echo smart speakers, new Amazon Alexa improvements, and eventually the company's first venture into personal audio with the unveiling of the first Alexa-enabled wireless headphones and earbuds.