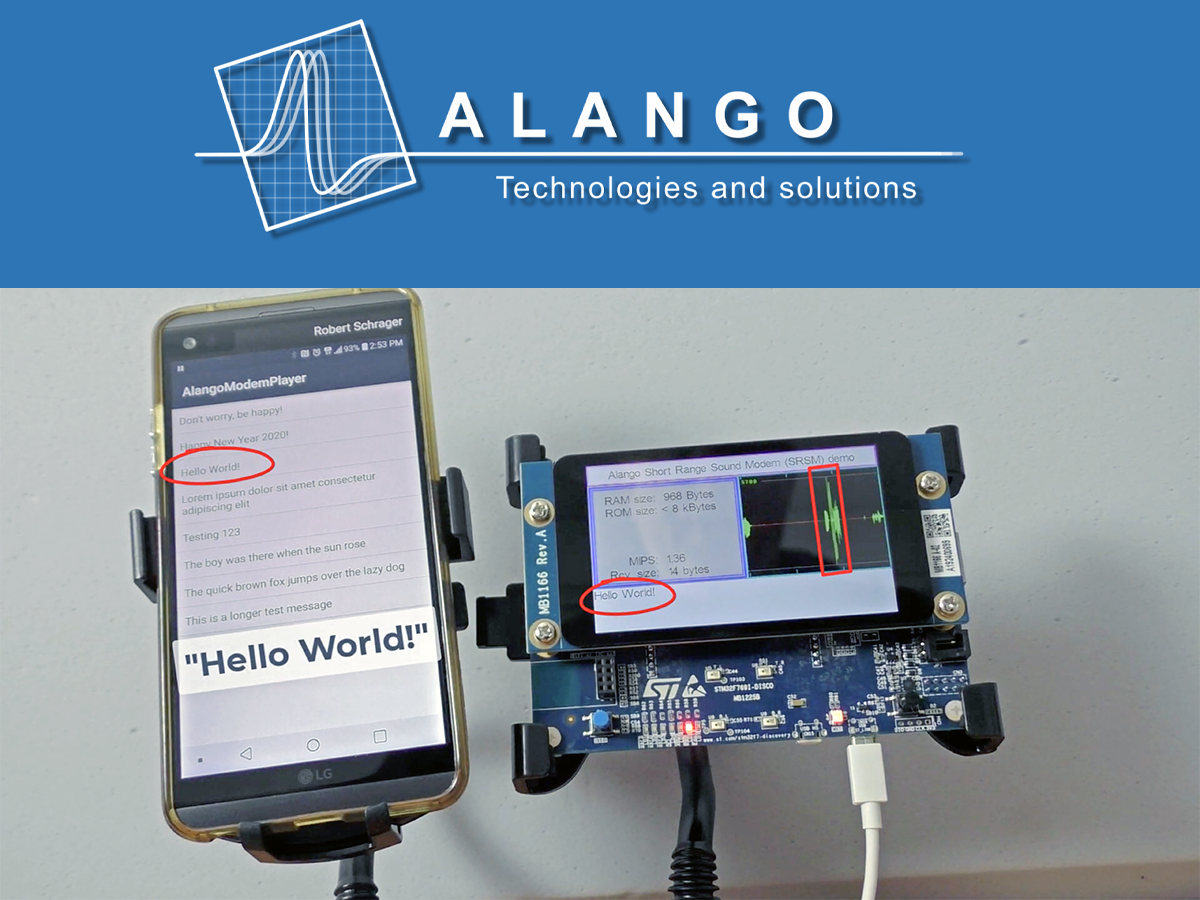 It was one of the most interesting demonstrations from Alango Technologies at CES 2020, and that's saying a lot. Usually, Alango Technologies' demonstrations at CES can be jaw dropping or sometimes so cutting-edge that only later we understand the real impact of what we've seen. And Alango had a lot of interesting new sound filters, clever algorithms and voice detection applications to show at CES 2020. But the Short Range Sound Modem (SRSM) technology was probably one of the most useful and practical ideas on display.

Alango SRSM technology allows for transferring arbitrary digital data, over-the-air, to a device via a narrow-band voice acoustic channel. In other other words, using a speaker and a microphone to transfer data between devices. The frequency of the data is within the human-audible spectrum utilizing a standard speaker from the transmit device to a standard microphone on the receive device. This is a very simple implementation of data-over-sound.

SRSM can also be compared to a traditional telephone modem (without a physical communication line) where data is encoded and transmitted on one side and then received, decoded and passed to the data consumer on the other side. This depicts a one-way communication scenario, but two-way communication is also possible with SRSM.

As Dr. Alexander Goldin, the president and CEO of Alango Technologies explains, the proliferation of devices (e.g., smart home, toys, robots, industrial control, etc.) led to the development of SRSM. "A nondestructive method of control and the ability to reconfigure the sealed out-of-the-box device by transferring data when RF means are not available (e.g., in an RF-restricted environment, or with non-RF devices). Even where the device has connectivity through standard RF protocols (e.g., Bluetooth, Wi-Fi) they are limited in auxiliary data transfer and fine-tuning. An example of a non-RF device is a voice-activated toy. If it has a standard microphone, it has the possibility to update its settings via data-over-sound. Hence, there are many cases where SRSM can add extra functionality to the devices in which no other means of non-destructive communication are possible."

SRSM technology uses simple PSK modulation to satisfy the requirement for communication that is short-range, low sampling rate, and high data rate. Specifically, SRSM utilizes 8-channel OFDM with PSK (QAM-4) for each channel modulation scheme. It encodes 16 bits of data per symbol with symbol length of 10ms. This provides a net data rate of about 1.5kBits per second. The preamble, a safeguard against spoofing with similar sounds, takes 250ms. Processor load is under 2MHz (on Arm Cortex M4), requiring less than 10kB data memory.

SRSM filters out signal distortions and follows clock skew to ensure reliable communication since PSK is inherently not robust to reverberation, multi-path propagation, and clock skew. Low bandwidth is utilized (1.2kHz ~ 2.6kHz) since almost all speakers and microphones provide good frequency response in this range. Sampling rates of 8kHz, 16kHz or higher are possible. Here is a link to a simple demonstration: https://youtu.be/sewSZvowuEQ 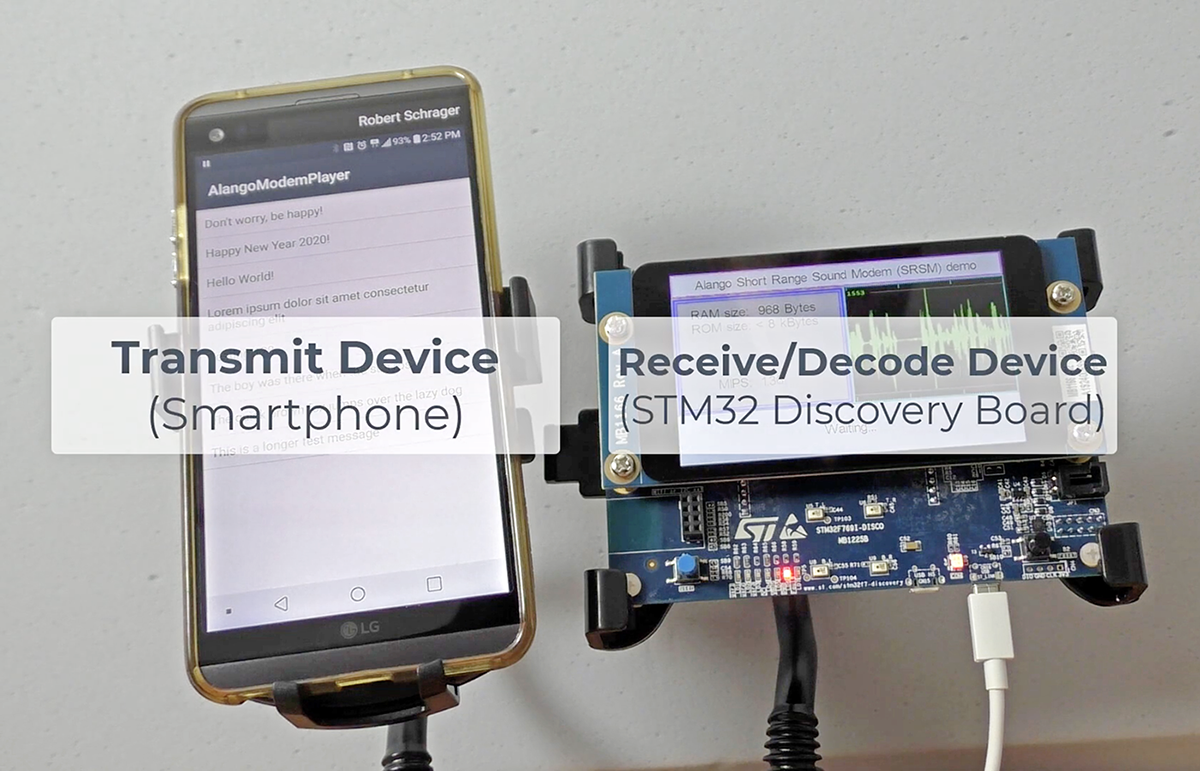 As Alango details, SRSM provides a reliable software-only solution for data transfer to sound-equipped devices that does not necessitate the OEM to modify or add existing hardware. Potential applications include configuring “smart” connected devices engaged in a variety of tasks: Communicating with other devices, monitoring environmental sounds, checking sensors, and sending data to the database.

With SRSM the user can change some parameters without intervention to the device itself and without accessing the database. For example, changing a thermostat temperature threshold, or as a method for devices like toys to communicate with each other.

Another application can be for proximity detection. SRSM is short range and the signal cannot be recorded from long distances for the purpose of spoofing. As such, proximity detection, opening doors or presence indicators are potential applications. The data payload can include the user’s ID and other information.

There are also a variety of two-way communication scenarios where two devices talk to each other. But with SRSM, the dialogue cannot be reliably recorded as with RF communication, which enables a higher level of security. In some cases, where no RF communication is possible (in some hospitals rooms, for example), SRSM overcomes this limitation and allows reliable data transfer to these places.

"Here at Alango we are using SRSM in our technology packages such as Voice Communication Package (VCP), which is used for human-human speech pre-processing. For instance, SRSM allows for VCP acoustic parameters to be updated during the tuning process without the need for a hard-wired interface. This is especially useful for earbuds and other small form-factor devices, since the process of accessing wired interfaces may undermine the acoustic integrity and tuning of VCP parameters," Dr. Goldin explains.

"Tuning is a repetitive process to advance the goal of achieving optimal acoustic performance. SRSM allows us and our customers to upload updated VCP acoustic profiles “on the fly” ensuring efficient tuning and an acoustically optimized end-product."

To answer many of the questions about its SRSM technology, Alango has published a white-paper avaialble online here.
www.alango.com
related items